You might have already read my review of the diesel RAV4 which we took up to Hahei for Leadfoot Festival. I was impressed with it, but thought it lacked in a couple of areas, namely equipment levels and performance. A week after dropping off that car, Toyota had a petrol RAV4 available in the mid-range GXL trim. It was time to find out if this one fixed those issues.

The base GX spec gives you, well, the basics. GXL spec is the same mechanically but adds a lot more features, including power folding mirrors, front fog lights, auto lights and wipers, keyless start, and more. Does this extra kit make for a better RAV4? 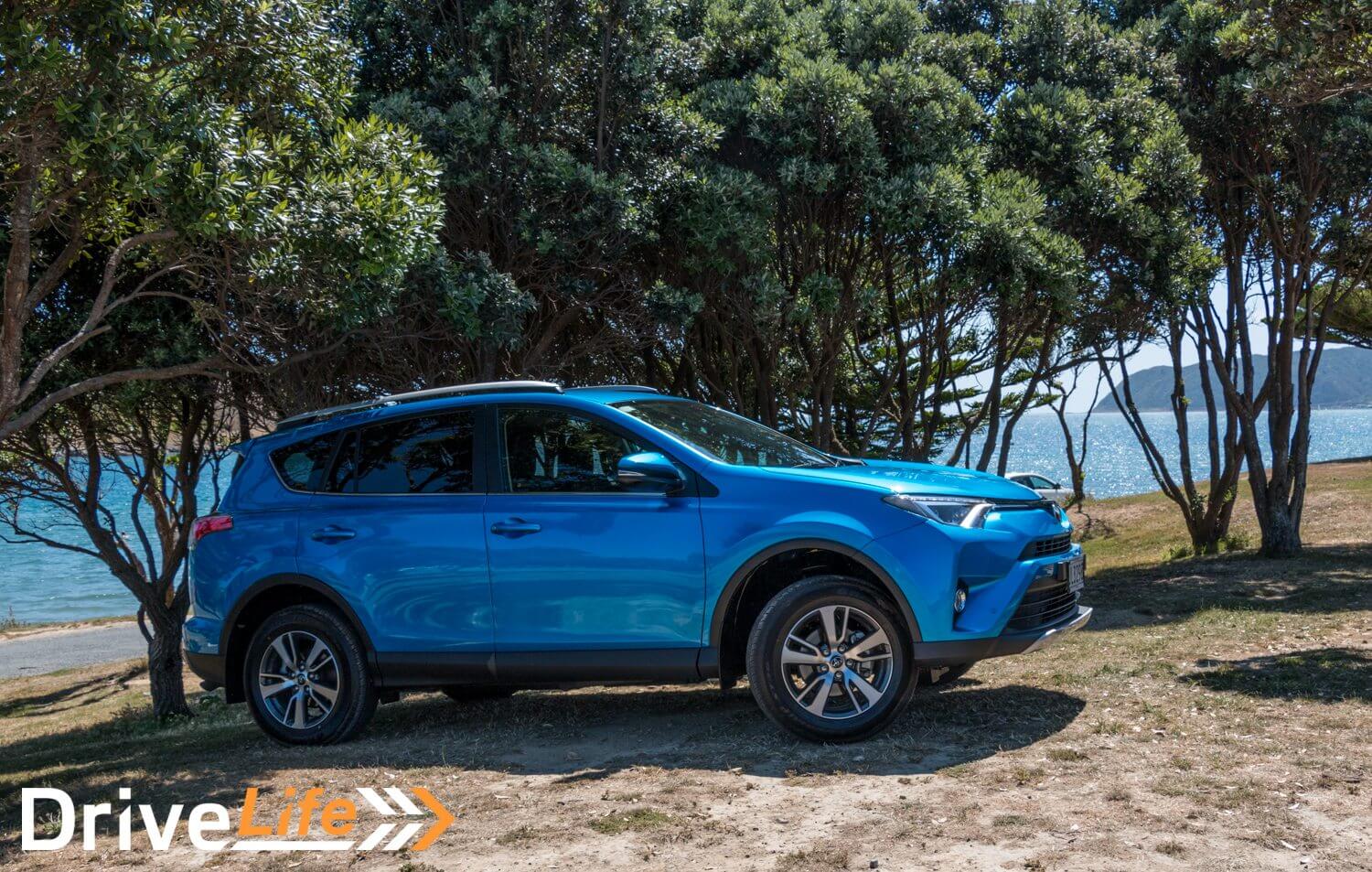 The first thing that stood out about this RAV4 was the colour. It was a lovely shade of metallic blue, a colour that really suits the RAV4 and looks way better than the plain white of the GL I had previously. In the sunlight, the metallic flake really showed through and looked fantastic.

After driving the base GX spec for over 1500km, the cabin of this RAV4 was very familiar. But GXL spec adds a host of little improvements. Where there was moulded-in fake stitching on the dash in the GX, this one has a padded covering with real stitching. Very similar to look at but it feels much nicer. Similarly with the steering wheel, it has the same comfortable shape, but now it’s leather trimmed and feels great. The seats are just as comfortable but have contrasting stitching along the edges, which makes them look nicer. 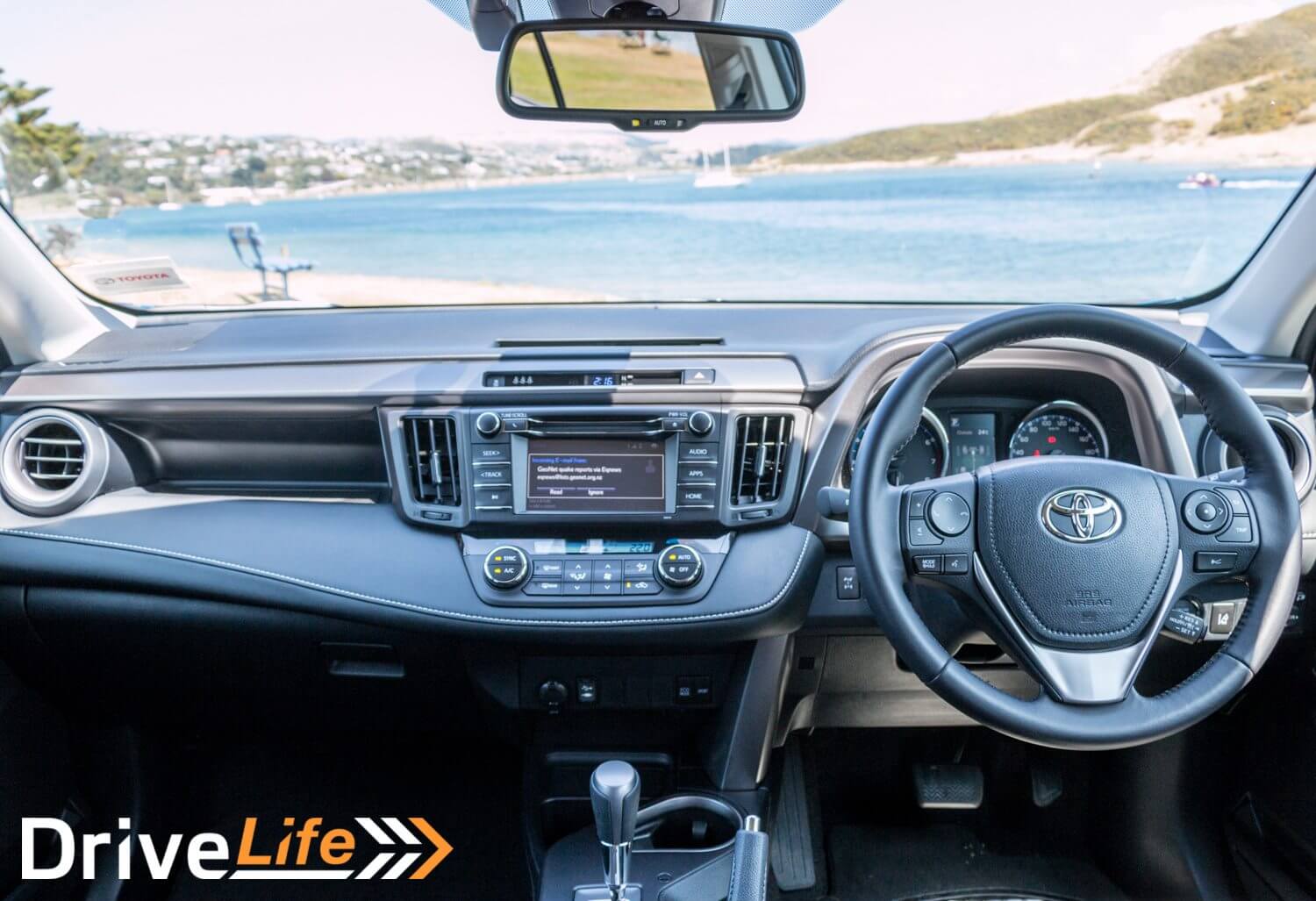 What about equipment? The GXL has two large instrument dials with a 4.2” central colour screen. This screen can be used to set up or turn on several features, or to display various information about the car. My favourite display was a diagram of the car showing which wheels power was going to, as well as a level meter to show the angle of the car. It’s obviously meant for off-roading but I left it on most of the time. From this I learned that the RAV4 is mostly front wheel drive, engaging the rears when it senses they’re needed.

How does it drive? One of the things that impressed me about the diesel RAV4 was the precise steering and car-like handling. This is just as good in the petrol RAV4, which has a 2.5 litre normally aspirated four cylinder, producing 132kW and 233Nm. It’s not a lot more than the 110kW/340Nm diesel, and has a lot less torque, but it feels much better. There’s a similar six speed automatic transmission, but this engine just seems to suit the car. It sets off from junctions with more enthusiasm, and has more pull coming out of corners. Slot it into manual shifting mode on a back road and it feels pretty nippy, making a nice growl as you accelerate. The GXL adds quite a few features which make the car that little bit more pleasant to live with on a daily basis. It has auto lights and auto wipers, both of which worked flawlessly. Keyless entry and start is good to have, and I appreciated this in a rain shower, being able to run up to the car with the key in my backpack and just pull the handle, knowing it would unlock immediately.

Replacing the basic cruise control in the GX is radar guided cruise with light city braking, so the car will stop if it thinks you are about to have a bump at low speeds. And the cruise control’s set speed is shown on the display, something which irritates me when it isn’t present. Well done Toyota! Now please fix the placement of that cruise control stalk and I’ll be happy.

There’s lane departure warning with active assistance: the car very gently nudges the steering back in the right direction if you drift. This is barely noticeable and much more subtle than Hyundai’s version. Added to this is blind spot monitoring, lighting an amber light in the side mirrors if a car is in your blind spot. If you indicate in that direction it starts to flash to really catch your attention.

The reversing camera display in the GXL has moving lines to show where you’ll end up. It also has cross traffic warning which is great when reversing out of a driveway with trees either side, like I have. 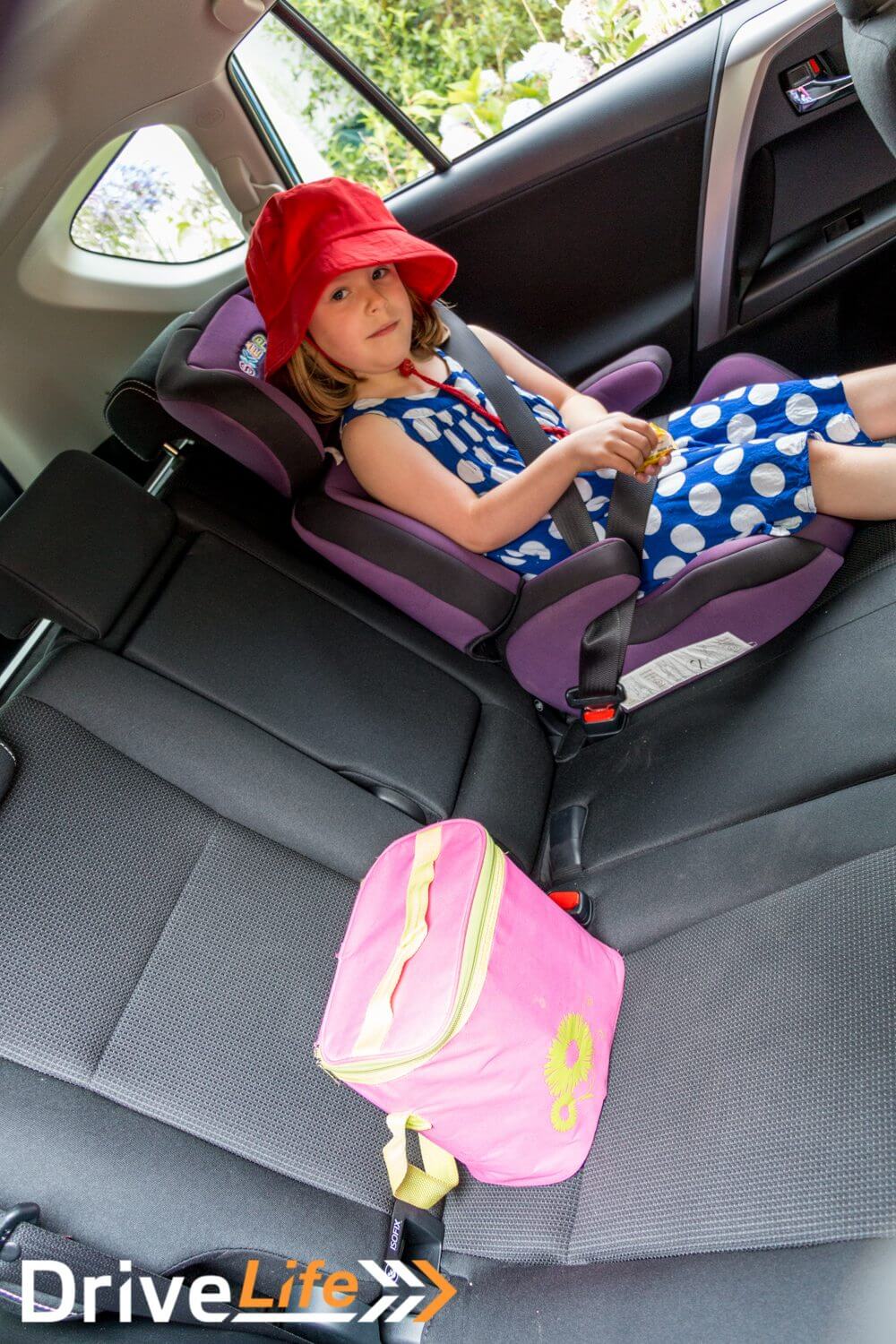 In the back there are plenty of anchors for child seats, and privacy glass to protect your kids from the sun. The floor in the back is flat, and rear legroom is ample, which was really useful for loading my daughter into the opposite side to normal so she could walk across to her child seat.

I used the RAV4 GXL for a week, and really enjoyed driving it. There were only a couple of things that I wasn’t keen on. The first was the seatbelt sensor in the passenger seat. It’s really sensitive, so a bag containing a bottle of milk and a loaf of bread registered as a person, making the seatbelt warning chime all the way home. Not a big deal but I imagine women with large handbags would have the same problem.

The other thing was fuel consumption. Granted I didn’t do any long trips, but I managed an average 12.1l/100km compared to a claimed 8.5l/100km combined. Overall I really liked this car. For the extra equipment you get and the nicer overall feel of everything, the $5k extra from the base model is worth it. I’m not sure the $9k jump up to the top Limited spec is as good value, but you’d need to try it in person to make that call. The top Limited spec gets leather seats, power rear door, an upgraded stereo, 18” alloys, a sunroof, satnav and front bucket seats. 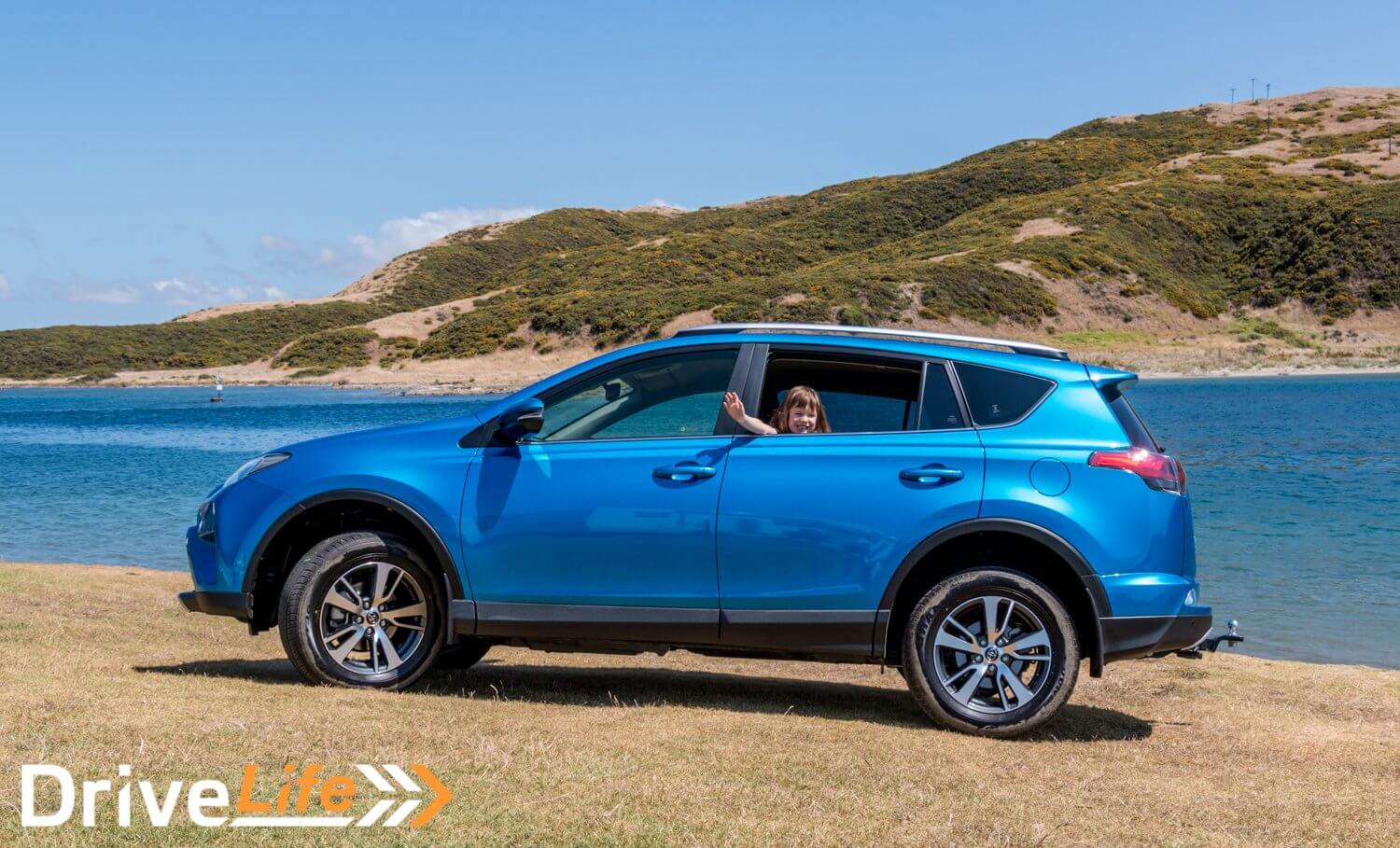 I think this is the RAV4 to have despite some misgivings about the high fuel consumption. The engine is well suited to the car with enough power to have a bit of fun, or to tow your boat trailer if that’s your thing. It’s well built, has loads of space inside, and the materials are much nicer than the GX spec. I’m rating it the same 4 chevrons as the GX, as the majority of features are just as good in both specs and the fuel usage is a bit of a concern. This one is a little more expensive but in my opinion it’s worth the extra. 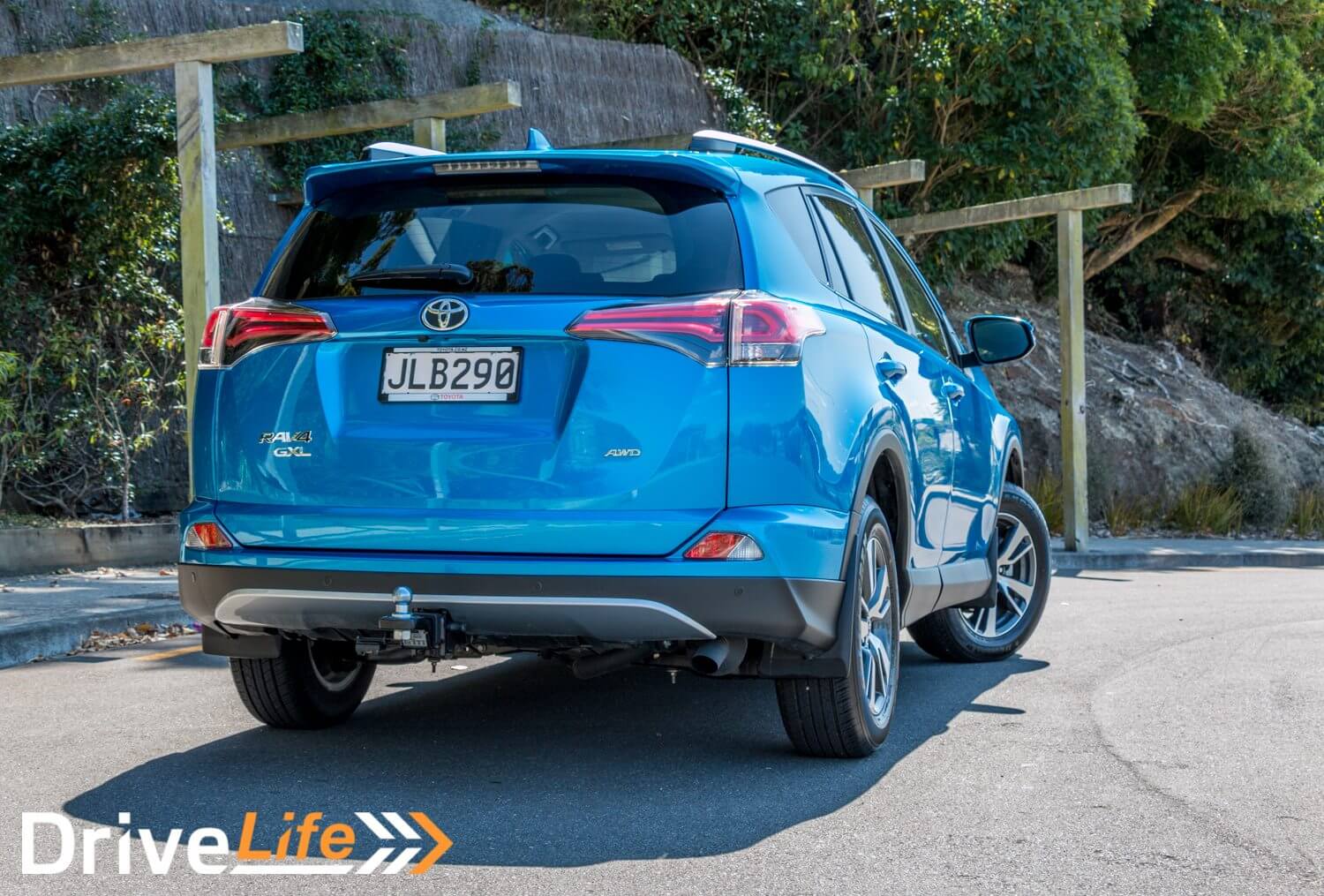