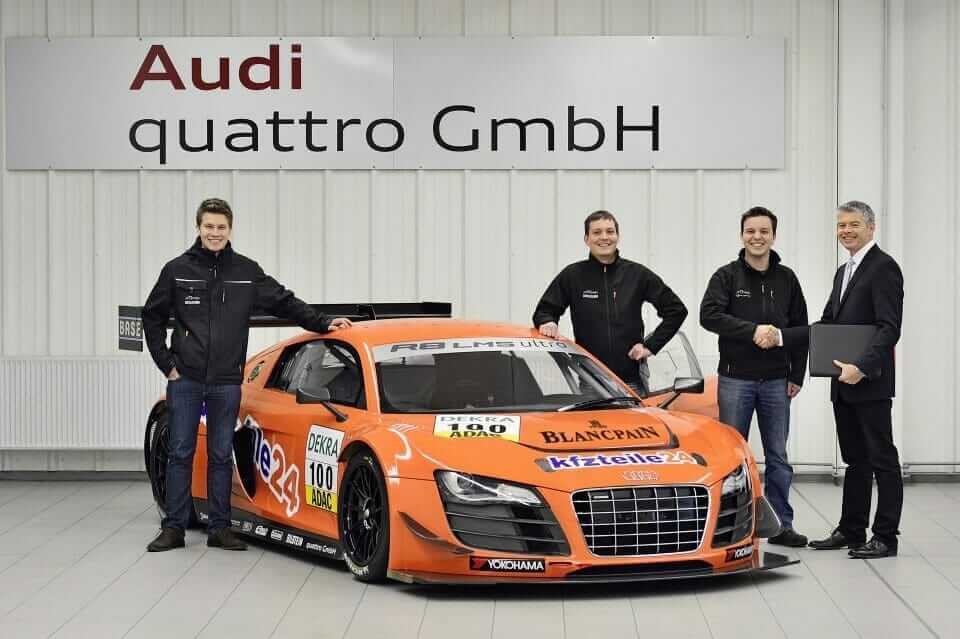 Newcomer to Audi Sport customer racing: Team MS RACING is switching to Audi and will be fielding two new R8 LMS ultra cars in the 2013 ADAC GT Masters. On Tuesday, quattro GmbH handed over the 100th race car from Heilbronn-Biberach, a facility of the Neckarsulm location, to the squad.

For the customer sport project that has only been in existence since 2009, this vehicle handover marks a symbolic milestone as quattro GmbH delivered the 100th race car based on the Audi R8 to a customer only four years after the program was launched. The Audi R8 LMS ultra meanwhile embodies the third evolution of the GT3 model. For the United States, the line-up also includes a GRAND-AM version that won the GT class at the Daytona 24 Hours in January.

“We’re delighted about Team MS RACING having opted for Audi for the first time,” emphasizes Franciscus van Meel, Managing Director of quattro GmbH. The wholly owned Audi subsidiary based in Neckarsulm develops, produces and sells the customer sport race cars of the brand with the four rings. “The sporting tally that meanwhile reflects 18 championship titles plus endurance victories at the major 24-hour races on the Nürburgring, at Spa, Daytona and Zolder underscores the car’s qualities as well. More than 50 percent of the race car is based on the production vehicle. At the same time, on delivering the 100th car, we’re extending our global market position. The R8 is meanwhile being fielded in races in Australia, Asia, Europe, North and South America.”

Sebastian Asch, last year’s champion in the ADAC GT Masters, visited the handover of the Audi R8 LMS ultra together with his team-mate Florian Stoll. Race engineer Ralph Stoll accepted the keys to the car from Dirk Spohr, Head of Customer Management at Audi Sport customer racing. The team based in Waldshut-Tiengen will announce its complete driver line-up in the next few weeks before the season starts at Oschersleben on April 27.