DriveLife
Home Manufacturers News Audi 2013 Audi SQ 5 – Car Review – Can you have your... 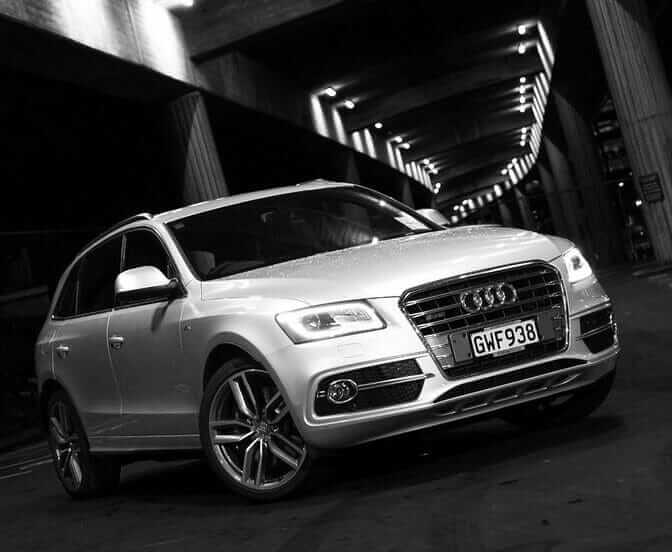 A big thank you to all the team at Armstrong Audi Wellington ( 66 Cambridge Terrace) for allowing us use of the New Audi SQ5 for this review. Drop in anytime to check out their complete range of new and used Audi’s. 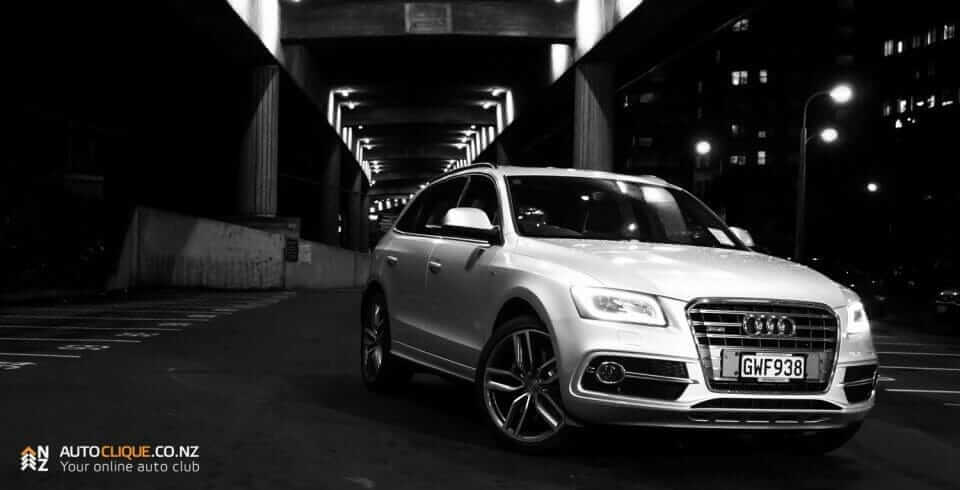 The SQ5 is the first in what will probably be a long line of high performance mid sized diesel SUV’s entering the market at a starting price of $123,000. Thats right, high performance diesel, not a collection of words you put together when shopping around for a SUV. This is a new niche in the market forged by Audi’s drive to prove to the world that diesel is just as good if not better for performance vehicles than petrol. Audi have their faith in diesel proven by the development of the engine for the Le Mans 24 Hours race, where they have taken the title seven times in the last eight years, each time with a diesel powered race car.

The SQ5 is a very well and nicely proportioned SUV, and optioned with 21” alloy wheels ($3,500) you get a very sporty staunch look. The SQ5 instantly seems smaller than you would you expect, due only to the vivid image of its big brother the Q7, which has become ingrained in everyone’s mind since its launch in 2006. The Q5 range has taken everything that worked for the Q7, added a modern updated face lift, and scaled it down so that its a slightly more practical mid-size SUV. The interior has also been updated and falls in line with the high quality that is expected with any of Audi’s other S models. 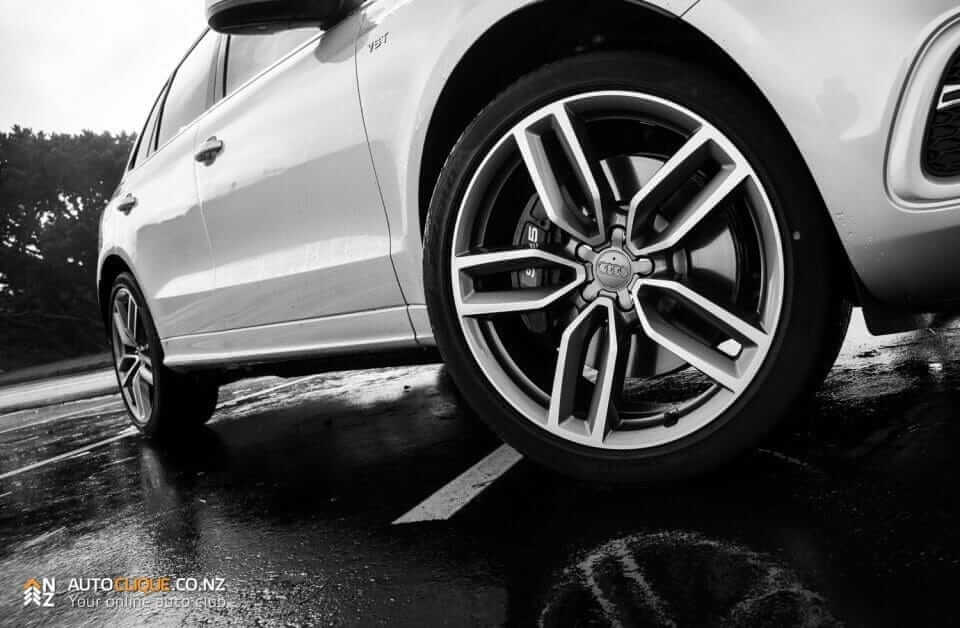 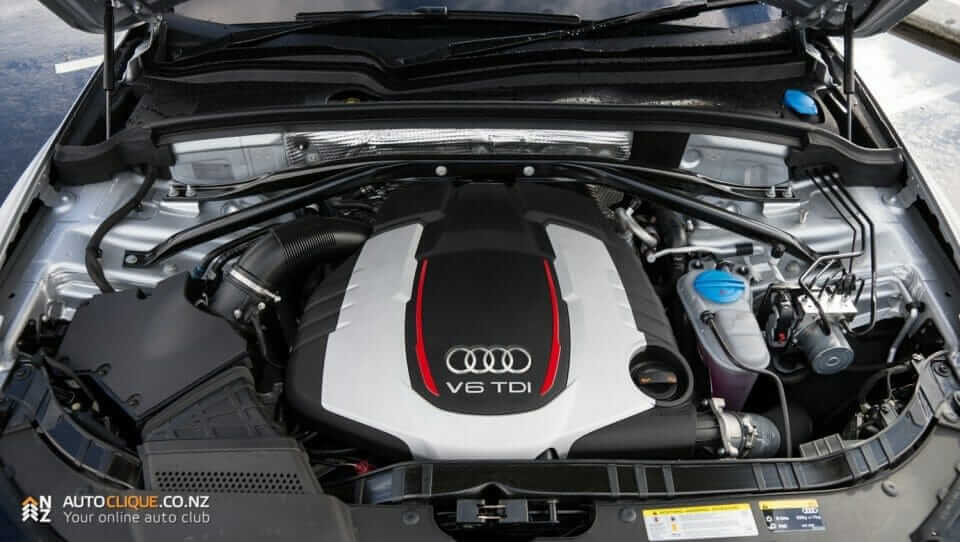 I took a couple of friends to lunch one day, more as a test to see their reaction, without telling them anything about the SQ5 or the Bi-Turbo Diesel Engine. They all saw a mid sized SUV, and expected what anyone would expect from it, until I pulled out onto the motorway, And everyone of them just said “ WOW……”. 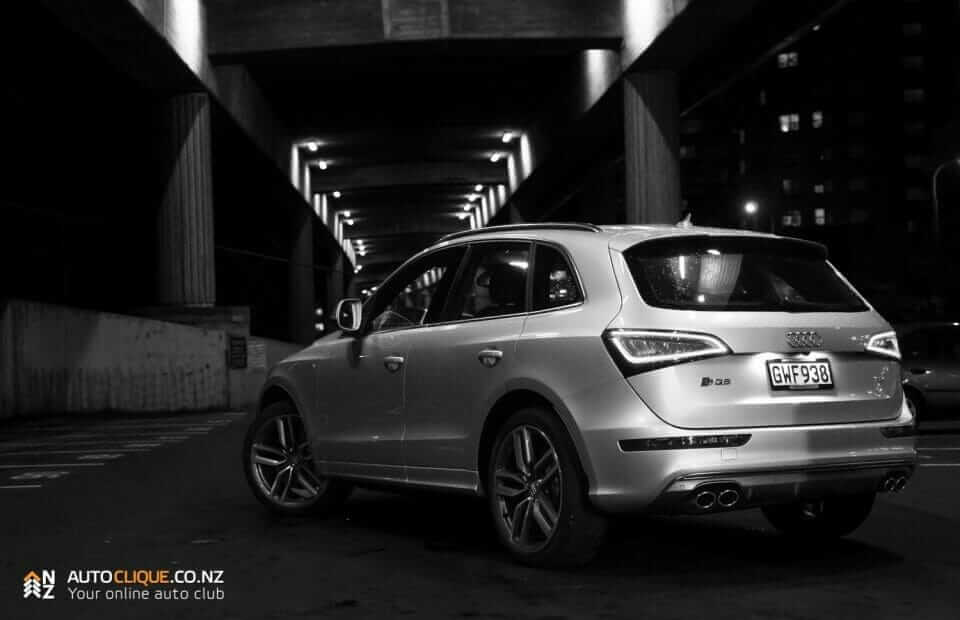 The SQ5 is a very easy SUV to drive. It has light steering which makes it easy to maneuver into parking spaces, but it does lack a little bit of feel on the open roads. It was surprising how quickly I forgot I was driving an SUV, all that torque easily hides the feeling of size and weight allowing you to enjoy the performance factor. Brakes were as expected for a vehicle of that weight, feedback though the pedal was somewhere in between performance and regular brakes allowing some finer control. The 8 speed tiptronic transmission was a bit of an unsung hero, I never really took much notice of it, as the low end torque was just always there, no matter when I wanted it. Sports paddles were available on the steering wheel, however I found that I never really used them as the Dynamic Shift Program was all over it. In standard mode it was more like a lazy auto with a split second or two between giving it gas and get a response. This could also be described as a luxury mode. In sports mode it was very punchy, like other high-end performance vehicles.

Dynamic Steering with Drive Select is an available option($3,350) which gives you several settings that among other things would adjust suspension stiffness. This was not in the model we tested and with the roll you sometimes get in cornering it felt that it would have added to the overall sporty feel when you switch over to sports mode. Though this SQ5 was not equipped with it, I didn’t think it reduced performance as the standard suspension was stiffer than standard SUV’s, but imagined I would have been even more impressed if it had been there. In addition to the power you also get some really nice engine noise. Once you pop it into sports mode a sound actuator in a side channel of the exhaust changes the tone, so much so that you would almost think its a deep growling v8 engine. All of the glorious sound is transferred back into the entire passenger cabin for you to enjoy. This does have its side effects, the main one being the fuel efficiency. Driving it like a v8 sedan will pull your fuel usage up to match a v8 sedan, over the few days I had this vehicle I averaged around 13L per 100km. Quite a bit higher than the advertised combine efficiency of 6.8L per 100km, I did have quite the effect on this figure, as the power from the SQ5 encouraged me to enjoy it. 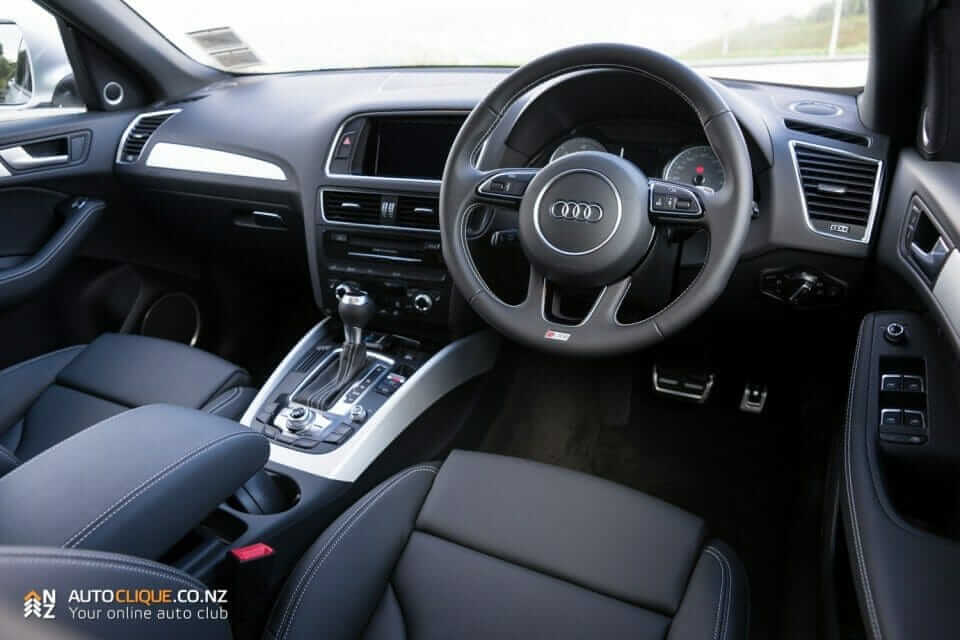 The Interior like any S model Audi is well designed, and every surface has a high quality feel. Our test model was optioned with the panoramic roof ($3,800). This is a must-have in my opinion, as it flooded the interior space with a huge amount of daylight which resulted in the SQ5’s interior space feeling more like it was the size of a Q7.  Every seat was very spacious, and the rear seats had no trouble with leg room even when the front seats are set up for taller people. 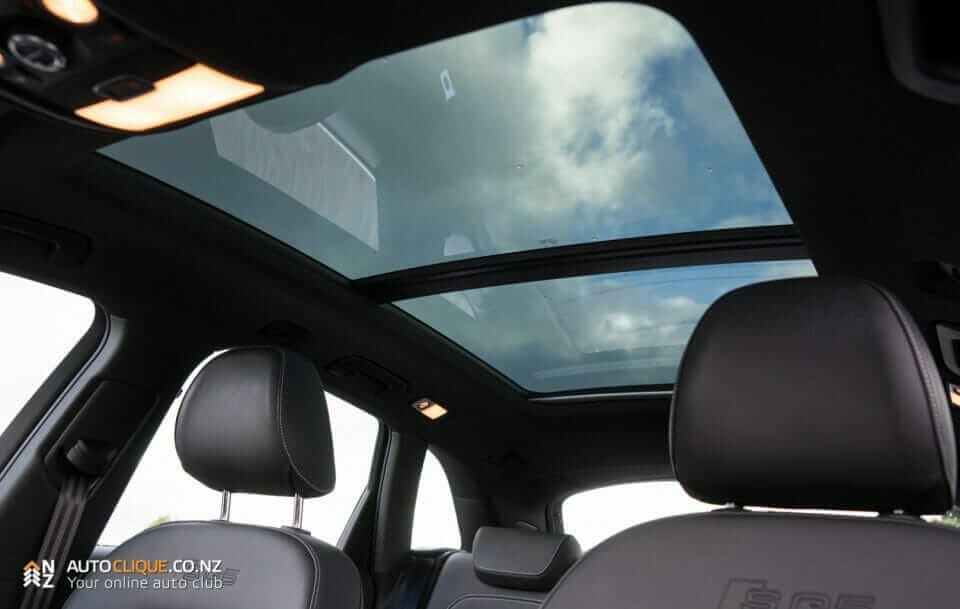 The overall interior space felt more luxury-oriented than performance, with the two front S model sport seats being the only sporty touch. It would have been nice to see a flat bottom performance steering wheel ($500) as part of the default package, instead of an option. The boot was a very good size at 540 litres, but the rear tailgate was a bit of a headache at times, being 6’ 6” I found I had to duck under the door as its electric tailgate ($1,400) only ever opened the door up to my eye level, which I then had to push up further by hand to avoid hitting my head. 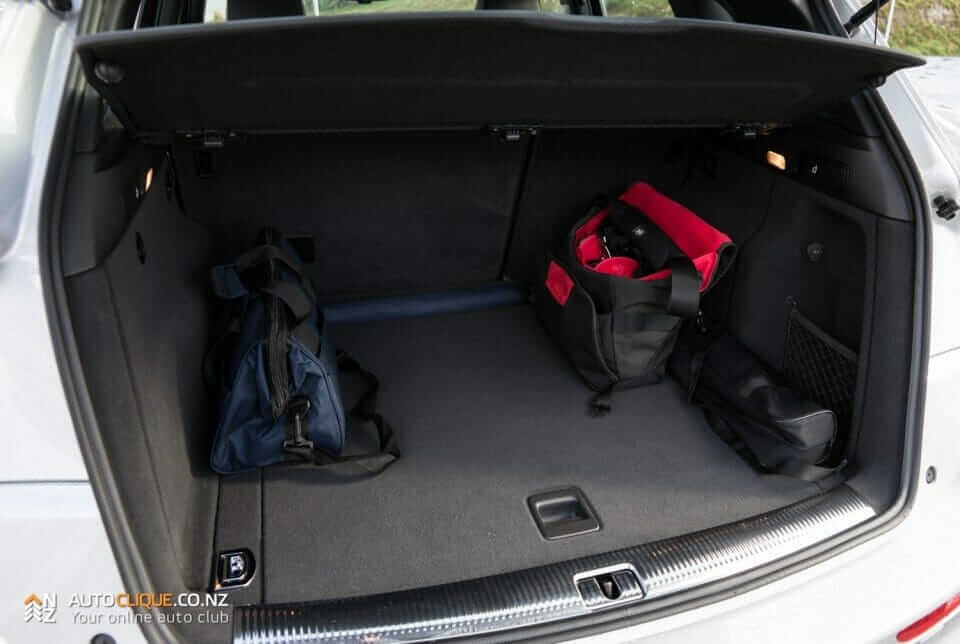 The SQ5 starts at $123,000 and right now doesn’t have any direct competitors for its size and performance class, and will not until later this year when BMW will launch their X3 xDrive 35 D in New Zealand. The main and most interesting factor of the mid-sized SUV’s added performance is that it pushes into the larger SUV price range. This could be a swing factor for some in getting a lower performance but bigger and more practical SUV for the same price. 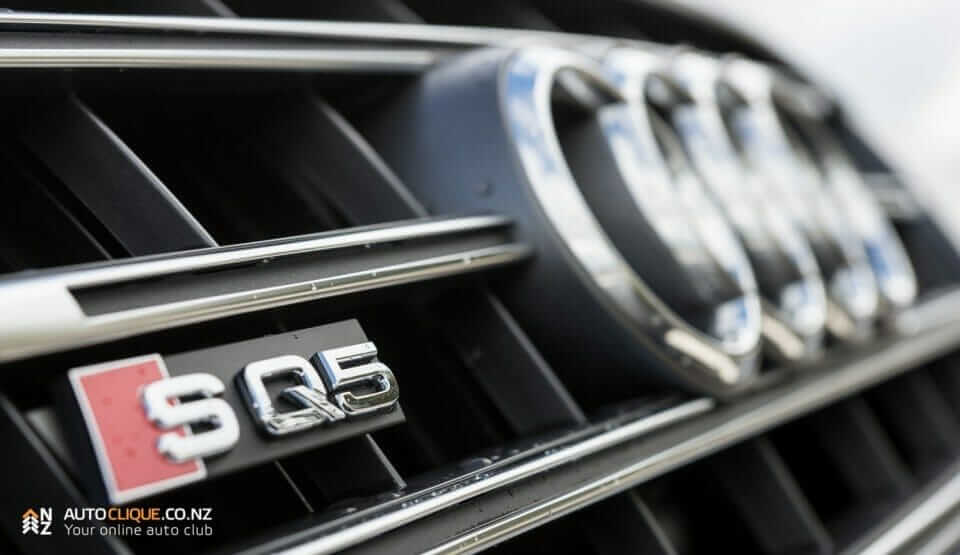 It’s not perfect, but it’s not far off it. Audi are definitely onto something, tying in very practical size, exciting driving, luxury comfort, stylish design and diesel economy all in one package. Of course the economy all depends on how much fun you want to have in it. The hard decisions will be deciding between the SQ5 and some of the other larger SUV’s on the market for the same price.