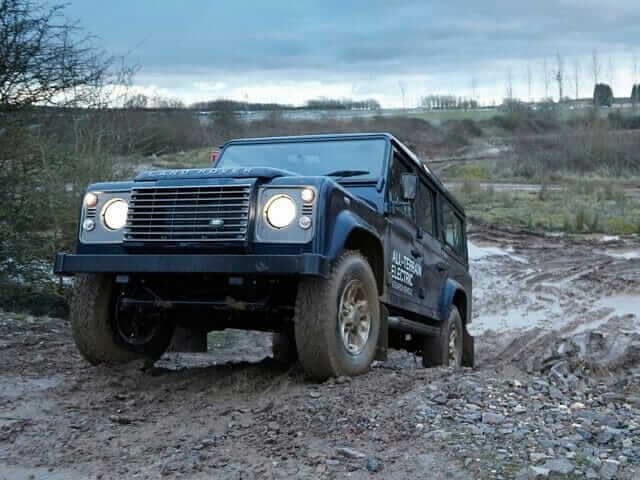 – First Electric Defender placed at the Eden Project in Cornwall as part of Land Rover’s investigations into the electrification of all-terrain vehicles
– Real world test: Defender used to transport Eden Project visitors around the site towing a 12 tonne road train up a 6 per cent incline

Whitley, UK, 31st July 2013: The first Electric Defender has started work at the Eden Project near St Austell in Cornwall in an inaugural real world trial of its capabilities. Unveiled at this year’s Geneva Motor Show, the Land Rover Electric Defender is a pioneering research project into the electrification of an all-terrain vehicle.

The project forms part of Land Rover’s overall sustainability objectives which have included the move to aluminum platforms in the latest all-new Range Rover and Range Rover Sport as well as the forthcoming Range Rover hybrid products. The innovative 4×4 is a rolling laboratory to develop new ideas, and investigate electrification in a real-world environment. A fleet of six vehicles will be placed with organisations where their performance can be assessed.

The Defender 110 Pick Up badged ‘All terrain Electric Research Vehicle’ effortlessly tows the four-carriage 12 tonne road train carrying up to 60 passengers on a 6 per cent incline to and from the iconic hexagonal-panelled domes. The vehicle has been designed to perform its duties throughout each day before being recharged over night for the approximate cost of £2.00.

The Electric Defender has all the qualities and performance which have become associated with the Land Rover brand during the past 65 years. It has full all-terrain capability, permanent 4WD and a top speed of 70mph.

However, it has been engineered in-house by Land Rover to test out the latest sustainable technologies. The vehicle’s Hill Descent Control is linked to a regenerative braking function, and overall up to 80 per cent of the car’s kinetic energy can be recovered. During each downhill trip at the Eden Project up to 30kW will be fed back into the batteries. Land Rover’s acclaimed Terrain Response system has been adapted for electric drive, offering a 50-mile range with a reserve of a further 12.5 miles.

The result is a zero tailpipe emissions vehicle like no other; eight hours of low-speed off-road use is achievable, and it takes 10 hours for the advanced lithium-ion batteries to be fully charged. ‘Fast-charge’ technology reducing that to just fours is also possible.

Jeremy Greenwood, Principal Engineer on the Electric Defender project, said the car was ideal for the sensitive ecology of the Eden Project. In addition, the repetitive nature of the work will provide excellent data for future electric vehicles.

“The car has been modified so it now includes a second battery,” Jeremy explained. “That will allow it to work a full day at the Eden Project, but also improves weight distribution and stability. In addition, we’ve linked the land-train’s air brakes to the foot pedal of the Land Rover, enhancing safety.”

Gus Grand, Climate Change Lead at the Eden Project, said: “We’re very pleased to be working with Land Rover on this exciting project. It will be a great talking point for our visitors and proves that electric vehicles can be every bit as tough and rugged as their fossil fuel counterparts, while being much quieter, cheaper to run and with zero emissions at the point of use.