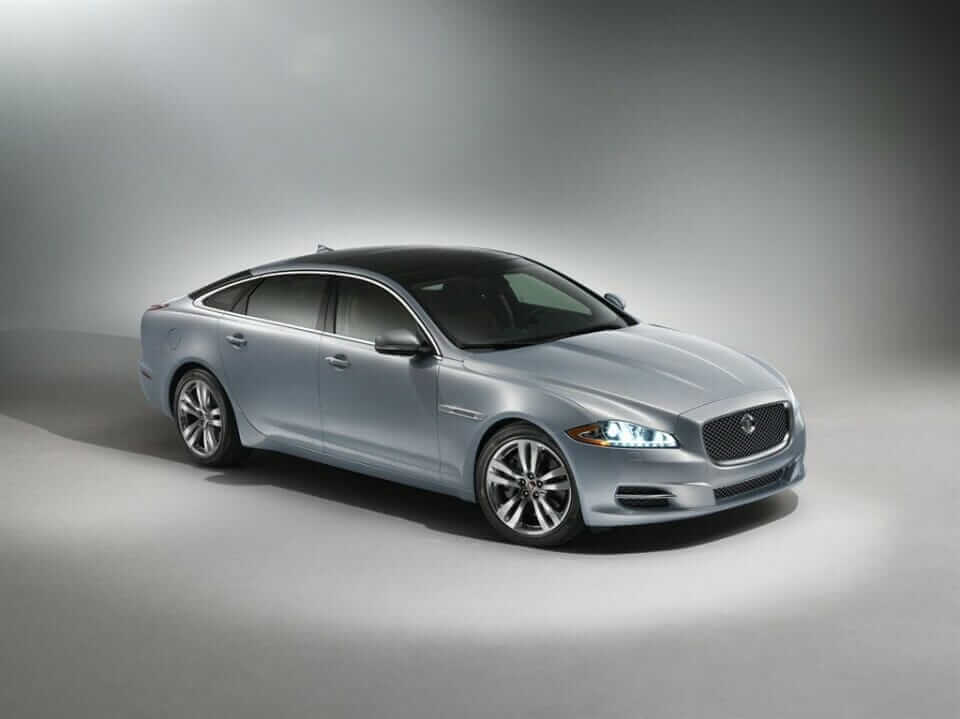 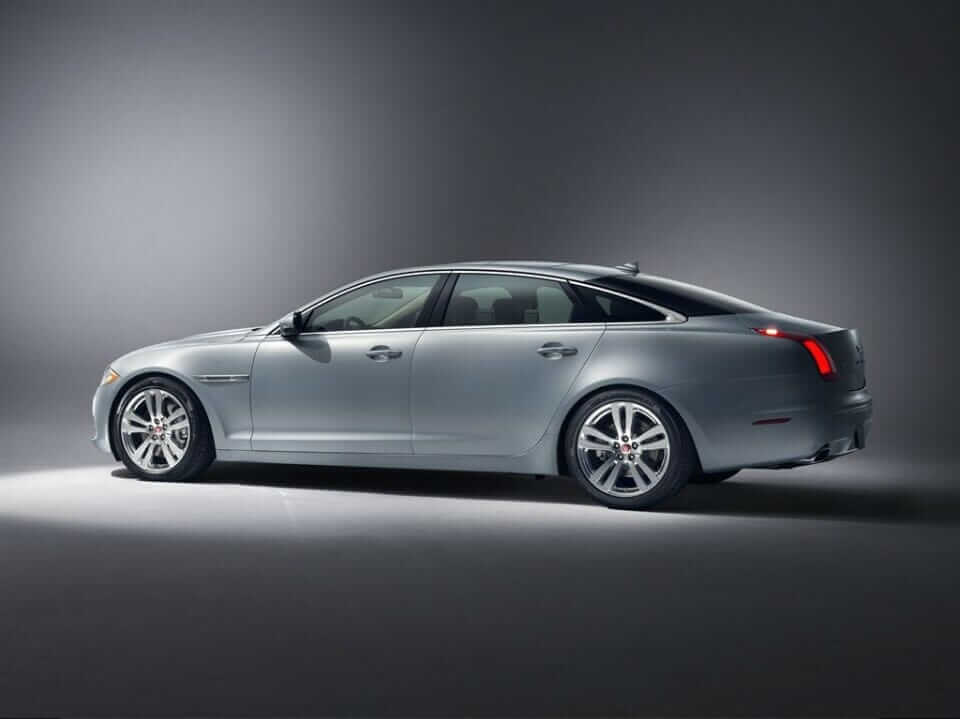 The 3.0-litre V6 supercharged petrol engine, which has been developed from the award-winning 5.0-litre V8, powers Jaguar’s ‘intelligent’ All-Wheel Drive system which continuously monitors grip levels and driver inputs to provide maximum traction in all conditions.

The 2.0-litre i4 turbocharged petrol engine, now available with Jaguar’s Intelligent Stop/Start system, uses a range of state-of-the-art technologies for power generation that belies its size. It produces 240PS and 340Nm thanks to the use of three key innovations – low-inertia turbocharging, direct fuel-injection and variable timing of both the intake and exhaust camshafts.

These engines, as well as the other XJ variants, are mated to Jaguar’s eight-speed automatic gearbox which offers a broad spread of ratios for a perfectly balanced combination of smooth-shifting, economy and driver control. 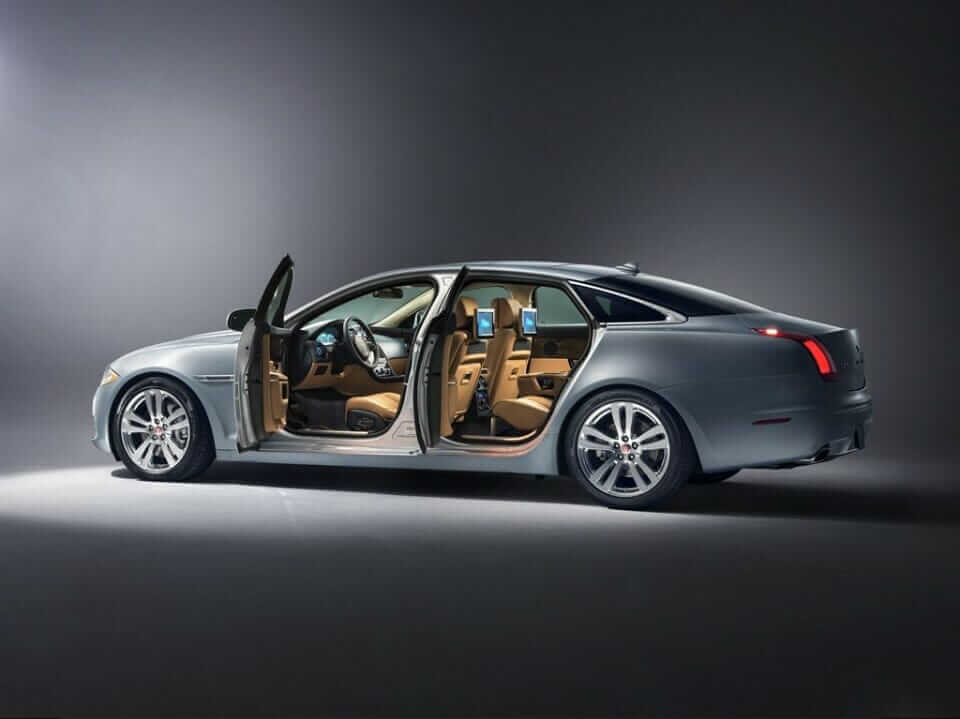 *Not for the US market

The 14MY XJ’s luxurious feel is underlined by the palette of materials used on the interior. This includes Bond grain, soft grain and semi-aniline leather, and a wide choice of veneers including Piano Black, Carbon Fibre, Gloss Burr Walnut and Satin Rosewood. The 14MY XJ also features a range of wheels including the newly designed Manra 18-inch lightweight forged alloy.

The 14MY ‘R’ version of the XJ incorporates bespoke chassis and aerodynamic developments to create the most focused, agile and responsive XJR ever. Seamless performance from its 550PS/680Nm, 5.0-litre supercharged V8 engine makes the XJR capable of accelerating from zero to 60mph in 4.4 seconds (0-100km/h in 4.6 seconds) and on to an electronically limited top speed of 174mph (280km/h).

“With a dynamic set-up tuned for both performance and incredible comfort, the new XJR brings immense breadth of capability to the segment, creating the ultimate high-performance luxury saloon car.” 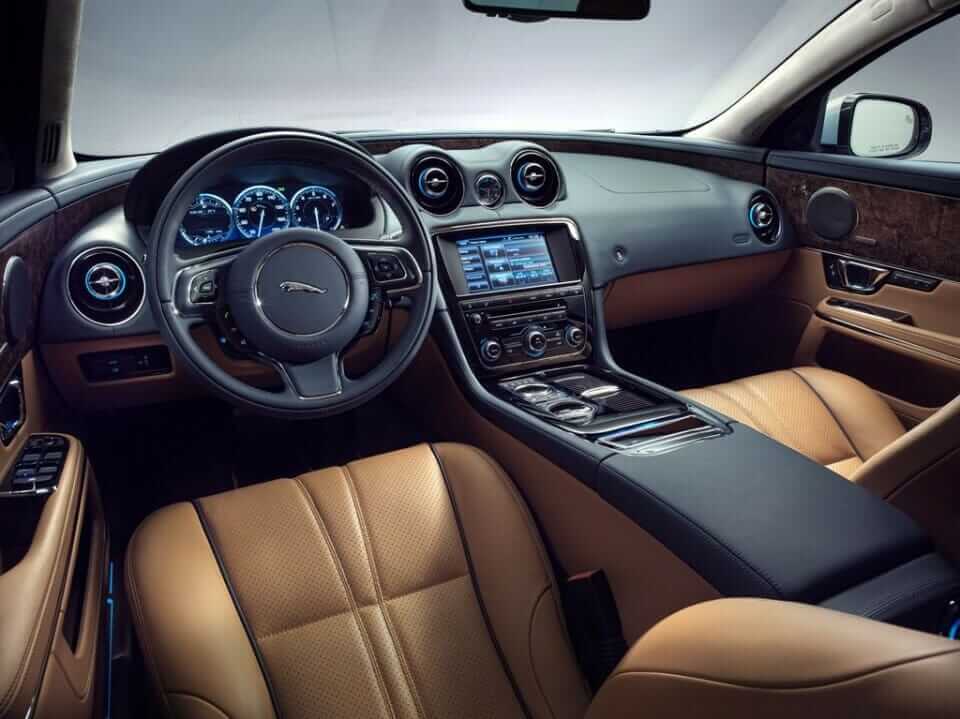 The 2014 XJ features a range of enhanced interior features focussed on the rear cabin of the car, which upgrade both the luxury and functionality of the XJ’s rear environment, resulting in the most accomplished Jaguar luxury saloon.

The rear passenger compartment of the 2014 LWB car includes two individual ‘airline style’ reclining seats which both feature cushion and squab adjustment, three massage programs – Wave/Rolling, Lumbar and Shoulder – to provide optimum levels of relaxation during long journeys, lumbar adjustment and two memory settings for each seat. The total recline adjustment of each seat is 11 degrees, with 103mm lateral cushion movement and 14 degrees of upper articulation movement. The rear seat home positioning setting returns each seat to its home position at the touch of a button on the door panel, easing entry and exit.

The new centre armrest, which can be stowed in the upright position to allow the use of the centre seat, houses all the seat controls as well as the Front Seat Activation button which allows control of the front passenger seat from the rear. 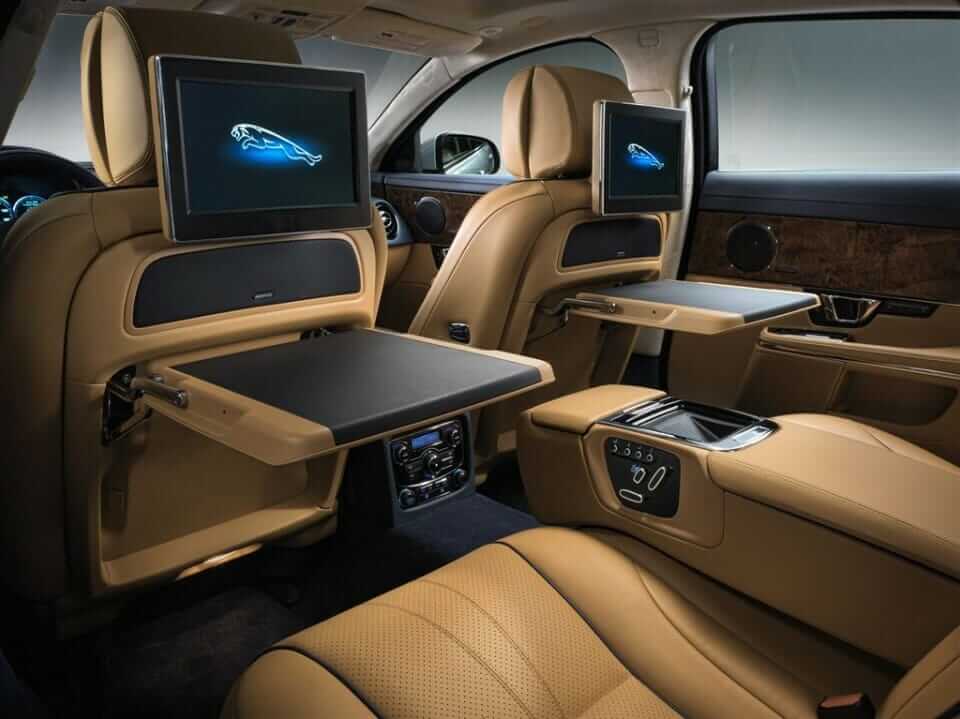 Front seat enhancements include massage functions for each seat with five levels of intensity, allowing occupants to personalise their massage settings to their preference.

Through the use of the front touchscreen, any one of the four electric seats can be selected and then fully controlled via the driver’s seat switches. The rear seats can be returned to their home position by the use of the touchscreen and driver’s memory buttons, and can also be programmed to return to their home position on rear door opening for ease of entry and exit.

Rear-seat passengers in the LWB version of the 2014 XJ are provided with a wide range of entertainment features. The Rear Seat Entertainment package comprises two 10.2″ high-resolution screens mounted on the back of the front seat headrests. These can display inputs from a number of sources; the DVD player, digital TV tuner or an external media player that can be synced through the Rear Media Interface, which provides USB and RCA connections. Audio can be transmitted through the wireless headphones, allowing each passenger to watch separate entertainment sources. The rear seat environment, including the entertainment, is managed by a wireless controller housed in the centre console which also allows passengers to alter their individual climate zones and seat heating and cooling functions. 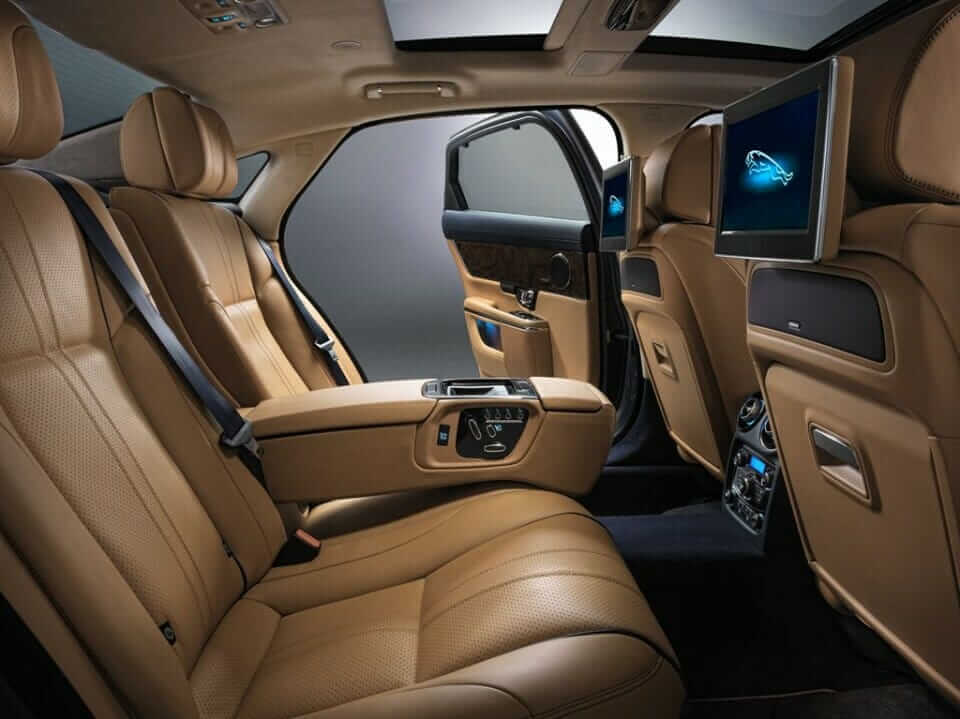 The LWB XJ also features leather-surfaced business tables in the rear, which fold out of the seatbacks of the front seats. To keep rear seat passengers shielded from the sun, and to offer privacy, the XJ offers electric rear-side window blinds that are operated via the window lift switches. An increase in rear headroom* by 13mm gives rear-seat passengers the optimum in luxurious, limousine levels of comfort.

*Not for the US market

The XJ’s 3.0-litre V6 supercharged petrol engine powers the car’s All-Wheel Drive system which operates ‘intelligently’, continuously monitoring grip levels and driver inputs to both pre-empt and react to wheel-slip, enabling maximum traction in all conditions. At speed in normal grip conditions the AWD system delivers drive to the rear wheels, thus providing the dynamic driving experience that all Jaguars are renowned for, while also maximising powertrain efficiency in all weather and road conditions.

The 2.0-litre i4 turbocharged petrol engine, which produces 240PS and 340Nm of torque, is offered with Jaguar’s Intelligent Stop/Start system for 14MY.

Maximising the benefit of the engine calibration is the eight-speed automatic transmission, which brings out the performance of the XJ while still maintaining the car’s composure in town and in low-speed driving environments.

When operating in automatic mode, the transmission can detect the manner in which the car is being driven by monitoring acceleration and braking, cornering forces, throttle and brake pedal activity, road load and kickdown request. On detecting a more enthusiastic driving style, the transmission will automatically make the gearshifts more aggressive and move the shift-up point higher in the rev range. Steering wheel-mounted gearshift paddles give the driver higher levels of control.

The 14MY XJ powered by the 2.0-litre four-cylinder turbocharged petrol engine now features Jaguar’s Intelligent Stop-Start system, which uses a Twin Solenoid Starter (TSS) to shut down the engine when the car comes to a halt, and restart it in less time than it takes for the driver’s foot to move from the brake to the accelerator.

The system offers ‘change of mind’ functionality, enabling the engine to quickly restart even during its rundown phase to allow the driver to, for example, exploit a gap in traffic at a junction. An illuminated ‘ECO’ symbol appears on the instrument panel when the engine has been stopped by the system. Intelligent Stop-Start can be turned off manually, but it will automatically be turned on again for the vehicle’s next journey with every ignition cycle. The system operates in all modes apart from Reverse. The 14MY XJ has a secondary battery fitted specifically for engine re-starting, meaning that all the normal car systems – such as the entertainment system, the ventilation and lights – continue to receive power from the standard car battery and are unaffected by the re-start. In addition, a sophisticated control system ensures that the Stop/Start operation only occurs when the car does not require the engine for other functions.

With the 14MY XJ, navigation is now available in nearly all the 101 markets that the XJ is sold in. A number of markets will now have an SD card based system, which uses the capacitive touch screen and integrates with the vehicle positioning systems to providing accurate and fast route guidance. As an industry first, a combination of Tracks4Africa and City Maps covering 15 African markets is offered. 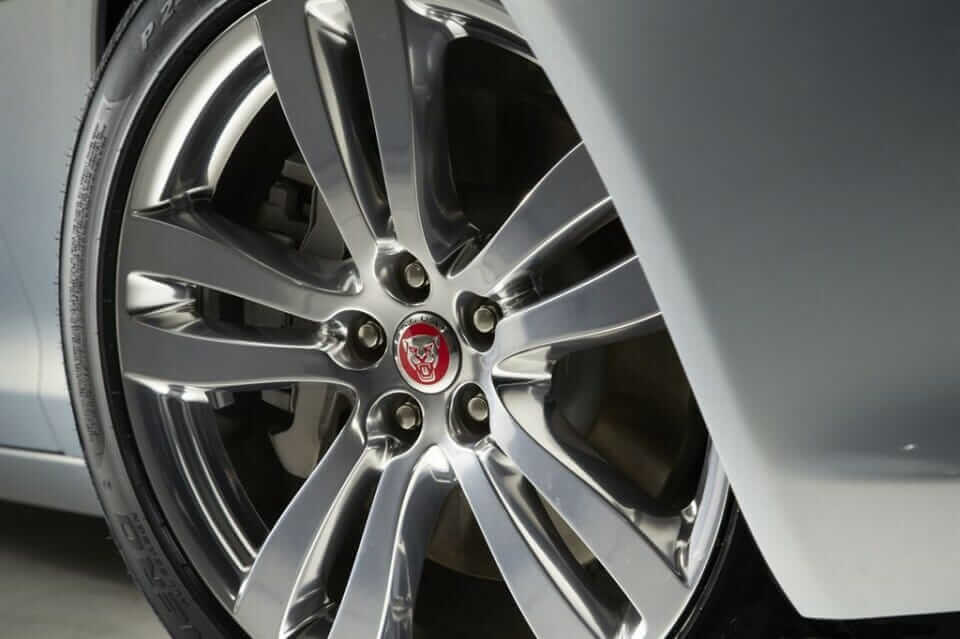 To underline its purpose in ensuring that passengers remain luxuriously cosseted at all times, the LWB version of the 14MY XJ features revisions to the rear suspension for optimised ride compliance, providing a smoother journey for rear seat occupants.

While this provides a truly relaxing experience for rear seat passengers, the XJ loses none of the model’s core dynamic abilities and so is as rewarding to drive as it is to be driven in. The XJ’s lightweight aluminium construction means a weight saving over its rivals of as much as 150kg, resulting in great advantages in terms of agility, acceleration, braking and driver feedback and involvement. 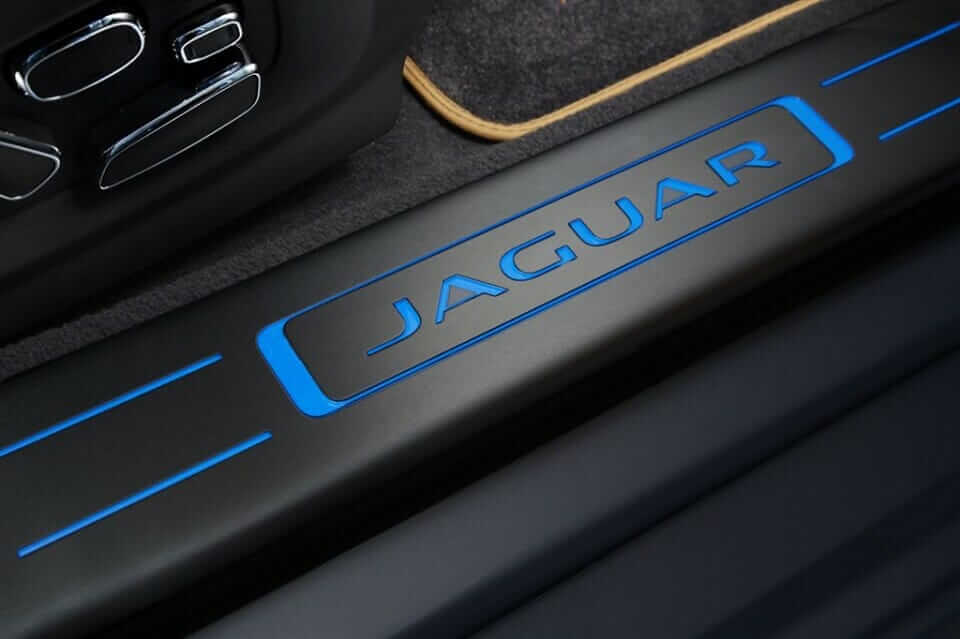 The 14MY XJ also features newly designed 18-inch Manra lightweight forged alloy wheels, and soft closing door technology which ensures that the doors of the XJ are securely closed with minimum exertion and undue noise. 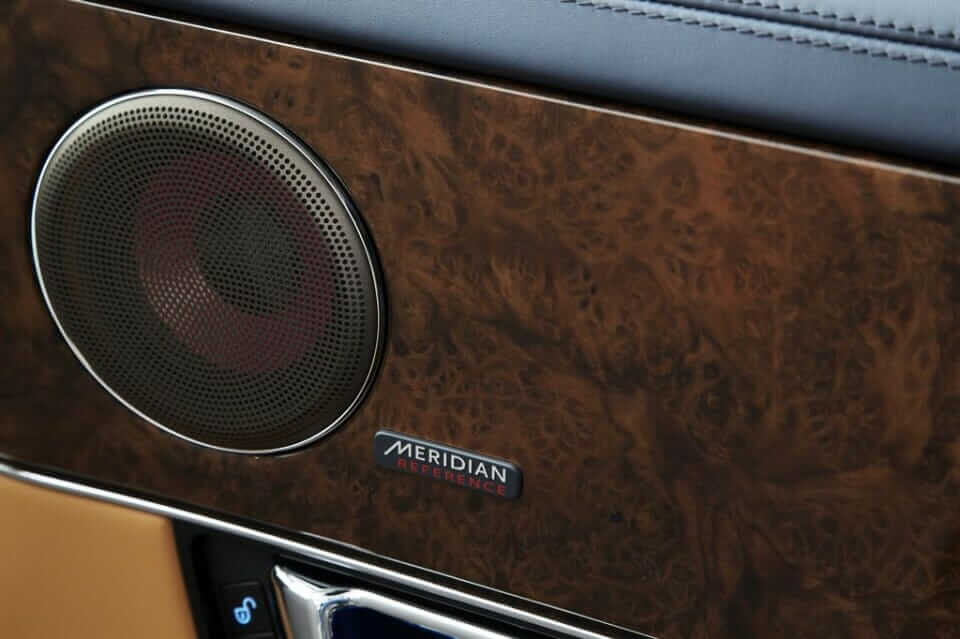 The Meridian™ Reference Audio System incorporates two 80mm speakers and one 25mm tweeter set in the rear of the each of the front seats; this combined with the speaker drive unit upgrades delivers a concert-like experience for all vehicle occupants. The system also incorporates DEC, which is a progression of the successful Dynamic Volume Control (DVC). This utilises the microphones above each listening position to optimise the frequency response and level of the sound to compensate exactly for varying levels and types of noise registered.

The Meridian™ Reference Audio System is visually recognisable with unique badging on the doors and rear parcel shelf and also the red cones on the door speakers, which are visible through the speaker grilles.

Conversation Assist, which is only available with the Meridian™ Reference Audio System, utilises a microphone above each seating position and digital audio processing technology to reinforce the occupant’s voice via the vehicle’s audio system. This makes it much easier for occupants to be heard clearly by the other occupants in the vehicle above any cabin noise.

Conversation Assist can be activated whenever the infotainment system is on, whether audio sources are actively playing through the audio system or not, but the feature will not be active when in a phone call or voice session.