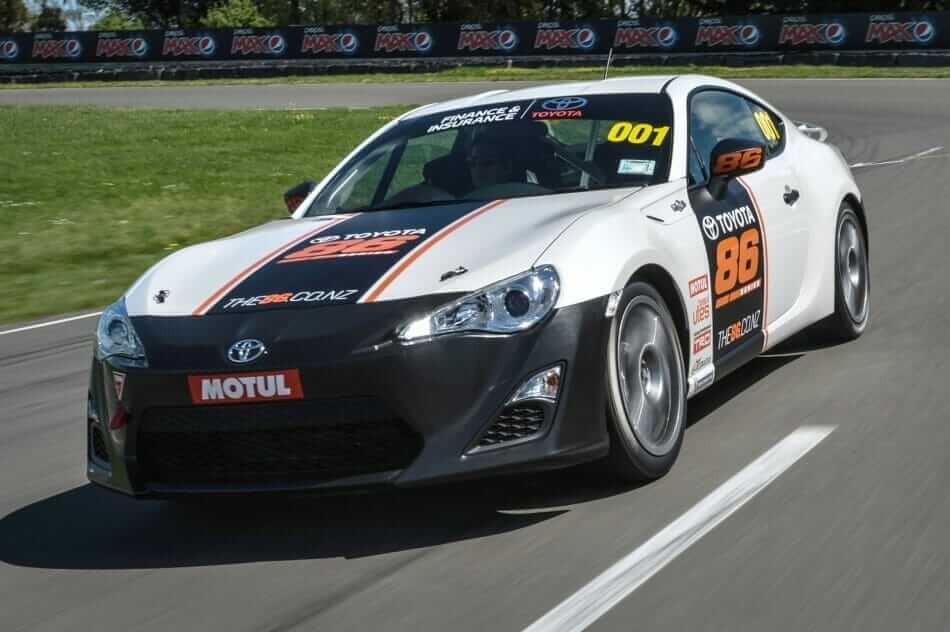 A new motor racing championship for Toyota coupes kicks off at the inaugural meeting on the Highlands Park circuit in Central Otago today. The seven-round Toyota Finance 86 series is a full MotorSport New Zealand championship, featuring factory race-prepared versions of the road-going Toyota 86. Former NZV8 champion Angus Fogg, a noted race engineer as well as a top driver, is helping Chris Lewis with his 86 campaign and may drive the car himself in some races. Lewis is a recent arrival from England, where he was a successful Mini racer.

“It handles well [in the corners], it’s very neutral, it’s got that very good Michelin slick tyre on it and massive brakes so you can certainly push it pretty hard. I did find it interesting to drive.”

The rear-wheel-drive coupe, known as the TR 86 in race form, has more than 200 horsepower and a whole list of changes to make it more race-worthy. The suspension is adjustable in several ways and Fogg says there is plenty of scope for drivers and engineers to fine-tune the setup for different circuits and conditions. Another prominent entry is that of young Wellington driver Jamie McNee, known for his speed in the Toyota Racing Series single-seaters. Christchurch teenager Tom Alexander was a front-runner in the 2013 Formula Ford championship. Altogether 10 drivers are entered for the first round, with more expected to join later. This weekend sees the first race meeting at the new circuit on the outskirts of Cromwell, built by Australian enthusiast Tony Quinn. The feature class is the final round of the Australian GT championship with exotic cars like Ferraris, Lamborghinis and Aston Martins. Fogg and Greg Murphy drove their V8 SuperTourers on the circuit at its official opening.

“The circuit is a pretty awesome facility,” Fogg said. “It’s the longest circuit in New Zealand and there’s about 20 different types of corners.”

The TR 86s have qualifying today, two eight-lap races tomorrow and one 12-lap race on Sunday.