A big thanks to BMW New Zealand and Jeff Grey BMW located at 138 Hutt Road Kaiwharawhara, Wellington for organising a brand new BMW 435i Motorsport for our Road Tested Review.

The 435i M is BMWs answer to the alternate German coupes, The Audi S5 and Mercedes C350. And what an answer is it, God Damn!!!! The 435i M is a stunner! From almost every angle it catches the light perfectly, mixing the seriously aggressive front end seamlessly with elegant executive styling. There are not a lot of cars that can pull it off, but this car looks fast when sitting still. Showing off its M sport package, letting you know it’s ready to get out into the world and have some fun. With 19” double spoke M wheels, M blue brake pack and aerodynamics package with larger air inlets in the front apron and rear diffuser, all hiding the suspension enhancements that make it worthy of wearing a BMW M badge. These are all standard options on the $126,500 BMW 435i M . And like a kid in a candy shop, I stood there and couldn’t contain that cheeky excited grin from showing through. 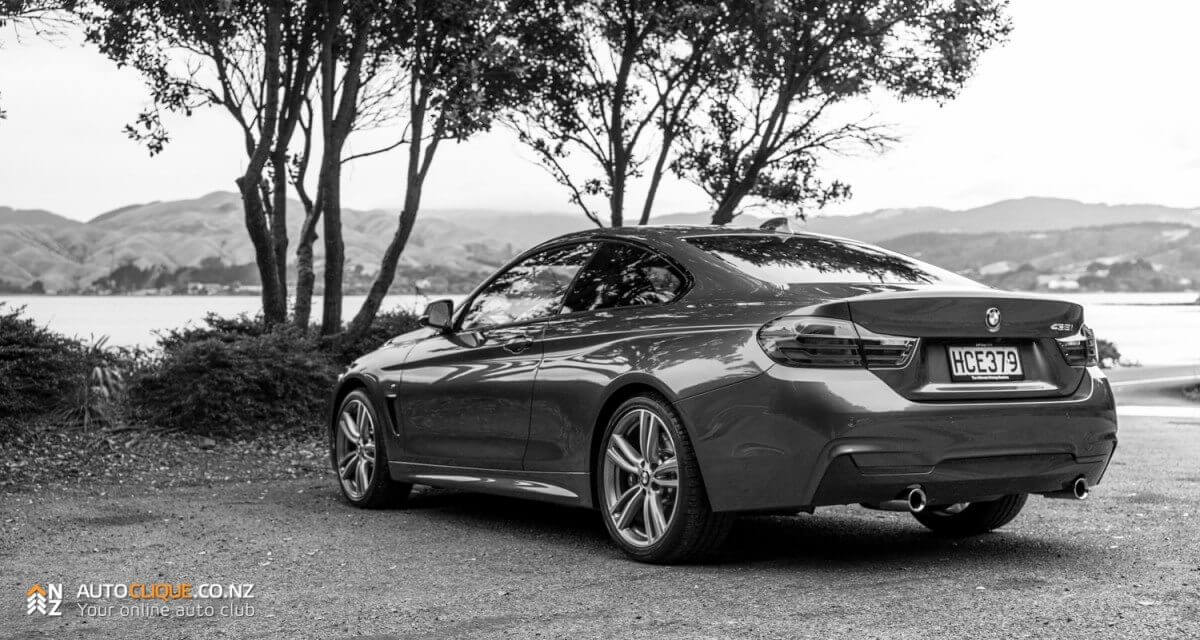 The 435i is a great car to drive, whether on the daily drive or out for an early morning sprint, it effortlessly felt like it was something you have always been driving. Placement on the road was instinctual and very enjoyable thanks to its even, low weight distribution. It went like bat out of hell too, with a 225 kw twinpower turbo 3.0 litre straight 6 effortlessly pulled the 1.5 ton car to 100kph in 5.4 seconds. When you request all that power you can hear the turbos spools up, almost at the same rate as your smile and I almost wanted a boy racer blow off right at the end. But would have thought that BMW’s market survey didn’t feel was required. This highlighted one problem, the engine was quiet, too quiet for a sports coupe. I found myself wishing from time to time that it had a V8 like the previous M3. Sucked back into the sport seats and optioned with the heads-up display it was hard to ignore the fighter jet feeling when carving up the country roads. This is a car that makes the weekly commute interesting, as you wait in anticipation to unleash it on the track at the weekend.

The sports suspension and brakes were just how I like them. When in comfort mode it did what you would expect, ironing out the road ahead while reducing a lot of feeling though the steering wheel. Additionally the steering wheel was lighter and less weighted than the sports mode. Selecting sports mode you instantly felt that the car was ready to get up to mischief, firming up the suspension enough so you can read the road while not making it completely uncomfortable. You could very easily leave it in the sport setting for a long trip and be fine at the end of it. The performance brakes were very nice. A feathery touch with great pressure control and no sudden bite. The pressure placed on the pedal felt like it was directly placed on the rotor itself, allowing quick, smooth and fine brake adjustments. 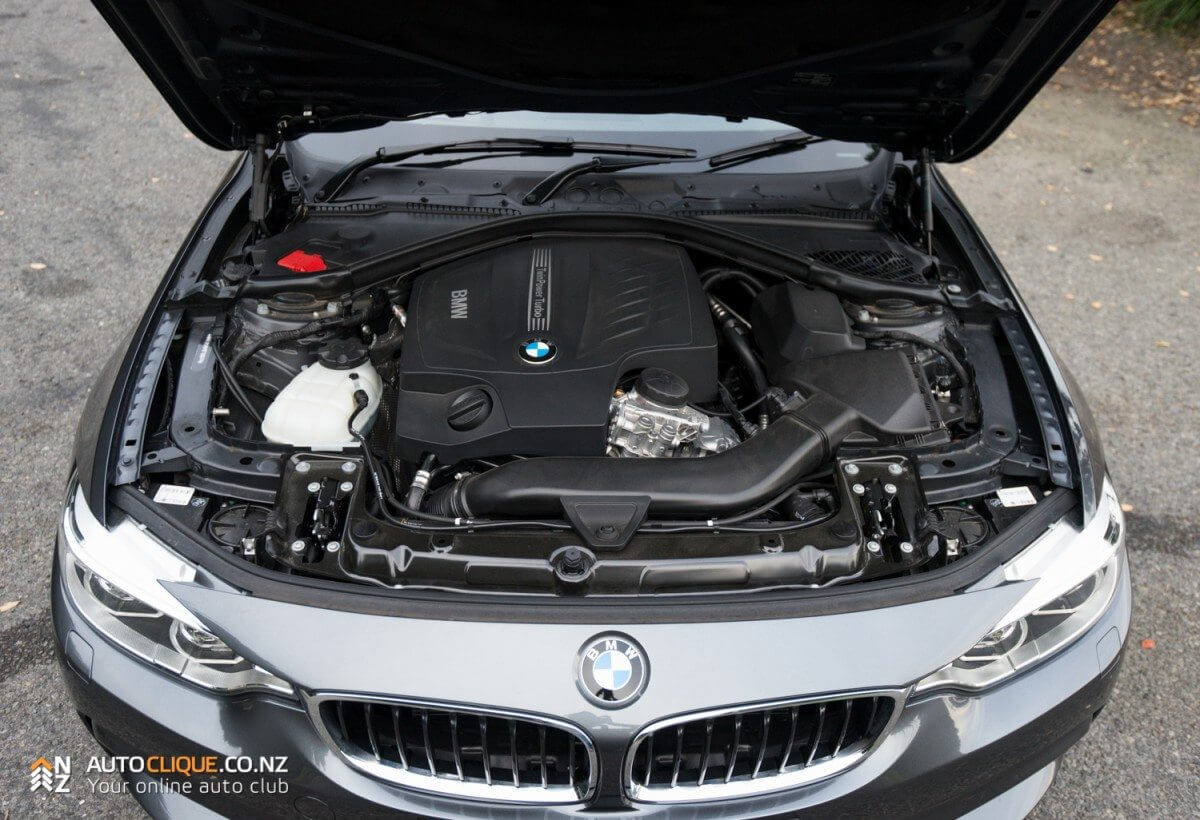 One thing that did seem odd or frustrating was the two separate sport mode buttons. One was activated by the standard S position on the gears stick, pushed to the left in this case. This switched the transmission and throttle control into sports mode, but left the chassis settings alone. There is a separate button to the side of the gearstick that selects from a range of driving modes, Eco Pro, Comfort and two Sports modes that alter the chassis settings. If you want to quickly switch the entire car to sports mode you have to activate both of these buttons. I thought that this could have been accomplished more ergonomic by having the chassis mode switch on the side of the gear stick allowing you, with one easy motion to switch both selections.

A selection that was somewhat unexpected in the 435i M was the Eco Pro mode, I say this as I can imagine a lot of customers sitting into the vehicle thinking to themselves, isn’t this an M badged model? I guess the entire market is going that way, and who am I to say we can’t have fun and be efficient at the same time? To be perfectly honest it wasn’t until I was running out of petrol and got the time to refill warning that I decided to test it out. And with the tank indicating that I had 42km to go I engaged Eco Pro. Once selected the main difference that is instantly noticed is your throttle control. I would almost describe it as disconnected, with the pedal now acting as a request for a percentage of power and like an old steam ship captain shouting down to the engine room for more power the engineers would select what was requested and feed it in as efficiently as possible. And to my own disbelief, the distance to 0km started to raise, 46km, 49km, 54km and as I cruised along it continued to increase. 30km later It now displayed that I had 45km before it was dry. It impressed me so much as I had not expected the mode to be there in the first place. As far as toys go, the standard options fitted on the 435i are quite astonishing. With a base price of $126,500 you would at least expect a few, but you get a lot more than you would normally expect from a Euro car. Where to start? Comfort Access System (keyless entry and push button start), Satellite navigation, Park Distance Control with rear view camera, iDrive Touch, Internet, Seat Heating for both driver and front passenger and finally LED Headlights with Dazzle-free high-beam assistance and Brake Energy Regeneration both of which I will come back to shortly. The only real options added to the model I road tested were the speed limit information ($900), head up display unit ($2000) and surround view camera system ($1000), bringing its total on-the-road price to $130,400. 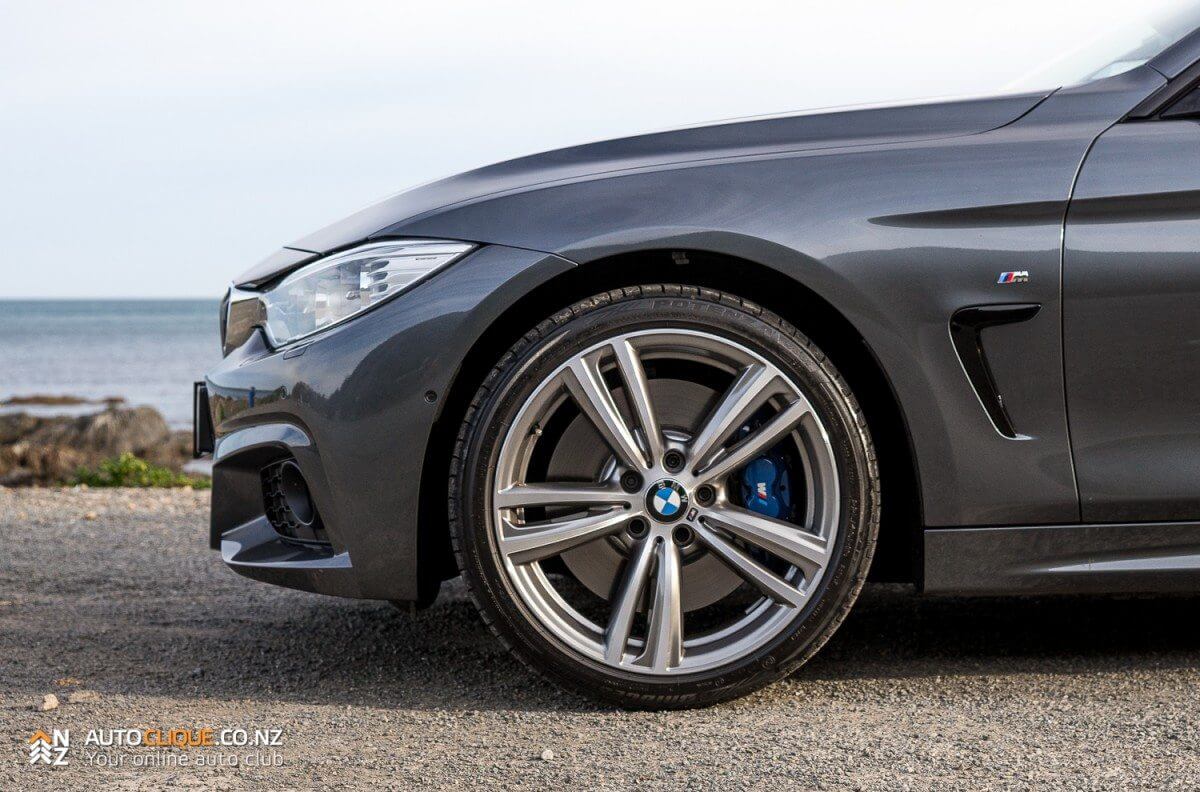 Back to Brake Energy Regeneration. It sounds very hi tech but it’s surprising simple. Every time you put your foot on the brake, energy is generated whether we like it or not. In the past this energy was just discarded, but due to advancements from international endurance racing this energy is now collected and fed into the battery. This now means that the alternator, which until now has been running all the time to charge the battery, is no longer required, reducing the strain on the generator. This also brings with it a slight increase in performance and reduced fuel consumption.

LED Headlights with Dazzle-free high-beam assistance, this sounds and is very hitech and is probably one of the most impressive standard features I have seen on a car in quite a while. What it does is simple, how it does it is witchcraft. Imagine yourself driving between cities at night, along a stretch of road without any street lights. You have the High Beam assist on, which has the LED hi-beams active as you can’t see any other cars ahead. You start to see a faint light in the distance, knowing all too well that some sort of vehicle is about to come into view. Normally you would be fumbling with the high beam switch, if you even remember it’s on, but not with this system. Once the forward looking windscreen camera sees the oncoming vehicle It alters the headlights position so that the highbeams are not shining into the oncoming driver’s eyes, while still illuminating the rest of the road left and right of the oncoming car with the full high beams. It will track the car as it moves along and will keep doing this until the car has passed. It’s pretty amazing to watch, like a magical cloth dancing in the breeze avoiding the oncoming bright lights and only illuminating whatever it lands on. And the most impressive thing is that it’s standard. Inside the 435i M you feel very relaxed and at home. It is simple clean design, allowing you to focus and enjoy driving instead of being drowned in a sea of buttons and controls. Black on black leather interior, with a subtle piano black trim running across the dash and down the doors. The bucket seats were very supportive and hugged on to you and even with a bit of spirited driving never let go. I initially thought the widescreen display was going to be annoying, but realised after a few days that it was not in the way and tucked into the dash just enough to not be an eyesore. The sports steering wheel is very nice, making the 2 and 10 grip position very natural. The Harman / Kardon sound system did the job very well, I did use it more than expected as the cabin is very quiet with the windows up. Surprisingly there was an okay amount of room in the back seats, not massive but useable even for a tall passenger. The deep bucket seats allowed me to sit in behind the drivers seat when set to my own driver’s position. The 2+2 large luxury coupe market has taken a while to step into the limelight. Mercedes and Jaguar have been doing it for years, with the C and E-Class and XK. And with the race to fill every hole in every manufacturer’s range BMW’s 4 Series finally stepped into the fold after Audi answered with the A5 lineup. Later this year Lexus will wade in with the new RC. As this market’s set goals are luxury and sporty fun driving, this leaves customers with one problem:  which one ticks the right boxes for them. To be truly honest, It’s close to perfect for a daily driver. A stunner to look at, drives like a dream, good useable practical size and packed with toys. It’s one of those cars that calls to you when parked in the garage, it wants to be driven. The 435i M is a great package at a somewhat decent price. Its only real let down is the lack of any exciting engine noise from the v6. As daily drivers go, the 435i M is a winner. I just can’t wait to see what BMW will do with the M4.