It was a bit of a shock, to me and everyone else, as it didn’t look like what I remember a Corolla looking like. This $37,490 mid sized sedan has quite a bit of Lexus styling woven into it and could easily be confused at a glance with its bigger cousin the Camry. This test happened to coincide with a regular Easter long weekend trip we do to Martinbrough with some good friends, so I thought what better to way to test it out then to take it up and over the Rimutaka Hill for the weekend.

The first test before we even began was to see how well the boot would fit all our stuff. We had a bit more than usual as I had to take some photography gear with me. All of our supplies for the weekend, luggage and photo gear all easily packed into the 540 litre boot without much fuss at all, leaving the rear seats completely empty. Sometimes cars like these can have a dramatic difference to the handling and power when loaded, but I never felt this when driving the corolla. Even up and over the Rimutakas it was easily able to keep a good pace, with enough left over power to use the overtaking lanes when there was a camper van or truck. This is thanks to the 173 Nm of torque generated by the 1.8L straight 4 (103 kW) and the manual sequential mode, allowing you to drop down a gear or two into the higher band. Power is smoothly delivered, and as the car is quite light it never feels like the engine is redline screaming just to pull the car along. The handling was nothing to sing out about, it was direct, but lacked a bit of feel at times, and oddly the power steering was a bit heavier than some other cars. Similar to power steering of cars five or so years ago, unlike today where you can turn the steering wheel with just your little finger. The brakes were good but had a bit of a pinchy grip to them, you could ease into them and then about 30 or 40% of they would grip harder than expected given the braking pressure. It made me use them more assertively instead of gingerly, pressing past the pinch point, which I got used to very quickly. The Interior was the biggest shock, quite nice, and not as much cheap plastic as I would have expected. There was some of course, but it was used in the silver accents throughout and not on every surface. Even the dash had a good solid, some would say European, quality feel to it. Most surprisingly of all, it was quite spacious. Being six and a half feet tall, I didn’t have any  trouble getting comfy in the drivers seat. The seats themselves were not that flat either, and had the hint of a bucket seat with some side bolster supports. The center console was very well laid out with the media unit, which is standard across the range, with bluetooth audio and usb capabilities. Under that a selection of three AC, temperature and vent dials. The audio system was quite good, and by quite I mean pretty impressive for what you’re paying, I have owned Euros that are way more expensive with audio systems of a similar quality. The GLX does not come as standard with GPS or a reversing camera, but you do get the parking sensors, which lead to my biggest issue with the car. When you use reverse, it’s indicated to you by a reversing beep from the dash, which by itself is ok I guess. But when used in conjunction with parking sensors it was often hard to figure out which tone was the reversing beep and the sensor beep as they would both chime out at the same time. I can see this feature causing quite a few accidents in parking lots. 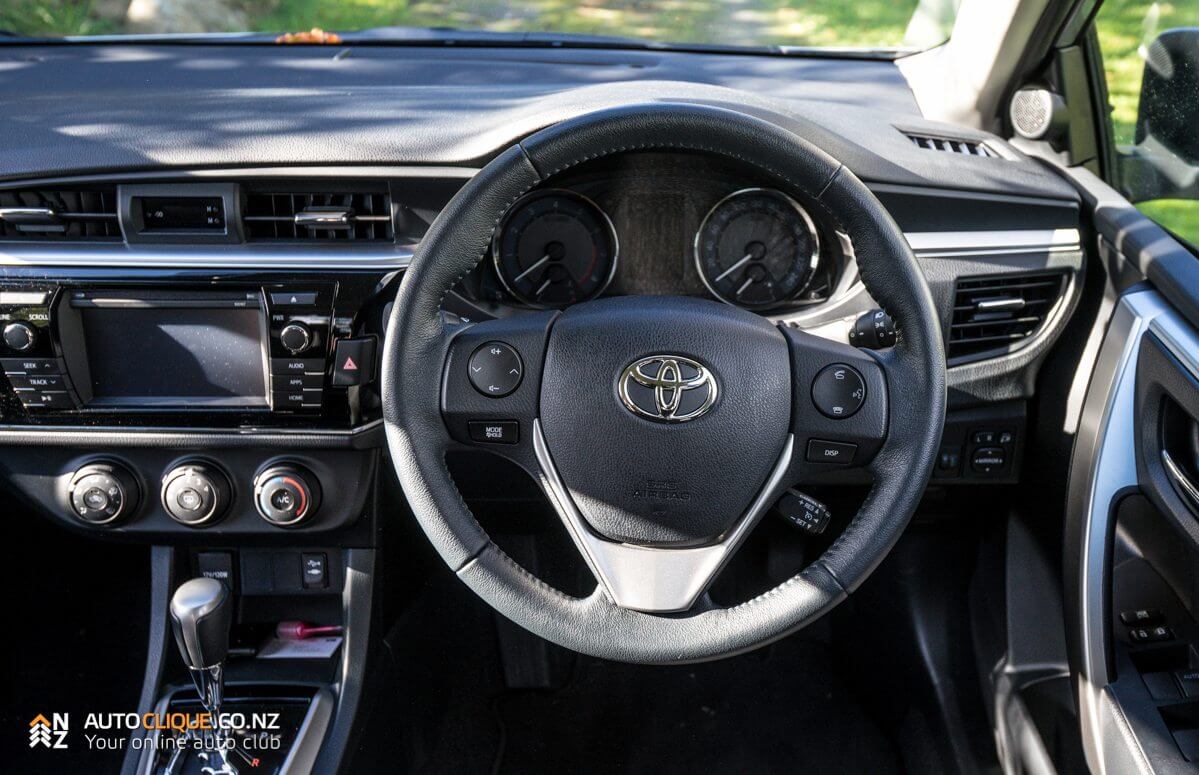 Of all the cars we have tested, this Corolla has to have the simplest smartphone sync. It took maybe three easy button selections on the touch screen and it was done, in under 10 seconds. I know this is usually a feature you only use once or when you get a new phone, but this efficient design was also seen in the rest of the media console controls. Very simple and easy to get what you want. The instrument display was quite well laid out too, and easy to read with the bright blue backlight. But there were two things that I didn’t like about it, at night the bright blue light doesn’t dim and can be a bit glarey, and when setting the cruise control it would be helpful if the digital display temporarily showed the speed you have set and then returned to the previously selected menu.Inside the car there was quite a bit of storage, a lot in the doors where you could even fit larger drinks bottles than in the centre console cup holder. Over the course of the weekend, I did think that the fuel consumption was a little higher than it could have been. I got an average of 7.0L per 100km, which is pretty good, but in the age of the turbo four cylinder, it would have seen vast improvements with a turbo. In saying that I did manage to get from Wellington to Martinborough, around the town and to a few vineyards (where I was the sober driver) then back to Wellington again, plus a few more days to and from work, all on one tank of gas. What’s it up against?

This section of the market leaves customers with a lot of choice, with nine different manufacturers’ sedans within ten thousand dollars of each other. The Corolla sits right in the middle. I am a tall guy, 6ft 7 inches and I felt the Corolla was a pretty decent sized car, I had plenty of room in the driver’s seat and there was plenty of room for someone just as tall behind me. For what is classed as a mid sized car you almost get more room than some full-sized Euro cars. 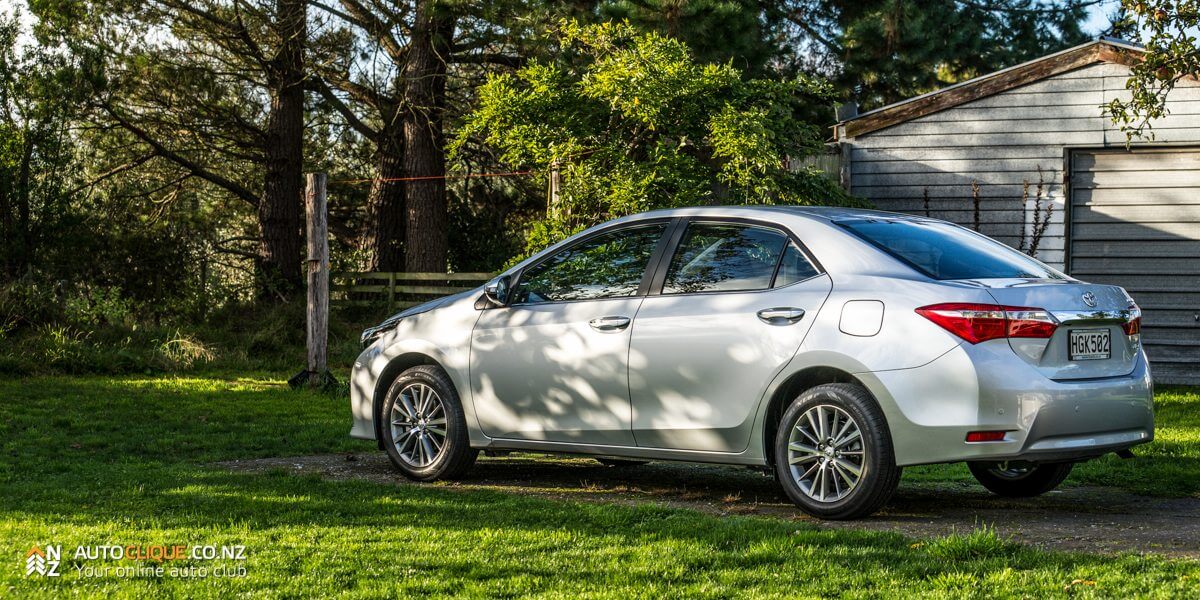 It’s not perfect, but it’s a hard car to knock given what it’s designed for. The build quality is good, the specs are good, the space is very good and the price is good too. It has quite a lot of competition, and it’s a bit too early to say if it’s the best of the bunch just yet. The new shape is very fresh and in my mind doesn’t look anything like what you think a Corolla looks like. Whether that’s a good thing or not is up to you, but we like this mid-sized sedan, and expect we will see many of them on the roads in the coming years.

A big thanks to Toyota New Zealand and Toyota Wellington located at 54 Kent Terrace, Mt Victoria, Wellington for helping to organise a brand new Toyota Corolla GLX for our Road Tested Review. 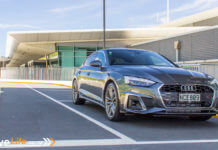