The Canadian Grand Prix could not have lived up to its reputation for a thrilling race in an more spectacular a fashion than it did last weekend when it both began and ended with a literal bang.

Though admittedly the first band between Marussia team mates Jules Bianchi and Max Chilton lead to the lest exciting Grand Prix start in the season so far, bringing the safety car out for near ten laps. Though this may just have helped Mercedes driver Nico Rosberg, allowing him to secure his first place for the bulk of the race. The incident also brought an end to Chiltons record of having  completed every race he entered. As the race progressed we saw nine DNF’s including the Mercedes of Lewis Hamilton who suffered from a break failure after both Mercedes simultaneously lost their ERS due to excessive heat. This ramped up the end of the race as both Red Bull drivers, smelling blood in the water, took every advantage to catch the suffering Mercedes. 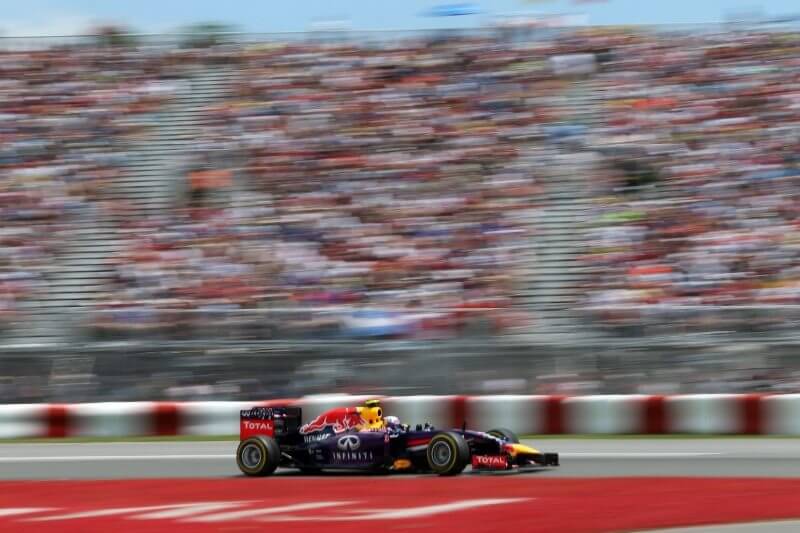 After being held up for some time by Sergio Perez, Daniel Ricciardo broke free and hunted down Rosberg in the closing laps to take first on the podium away from the struggling Rosberg, with Red Bull Team mate Sebastian Vettel Getting by Peze to take third spot. The big change, however, came when Filepe Massa’s breaks failed him, causing his Williams to launch into the back of Perez and sending both cars and drivers into the barrier. This launched McLarens Jenson Button into fourth having just passed the Force India of Nico Hulkenberg into the final corner before the main straight. The Safety Car Securing all places for the final lap. Although Rosberg lost his first place to Ricciardo, he did secure an additional 18 point lead in the championship ahead of his team mate Hamilton, who left Canada with no points to his telly, meaning that Rosberg now has a race win lead on Hamilton.

One thing is for certain as we approach the inaugural Austrian Grand Prix, a track that may have better surfaces than Canada yet similar in its high speed and high g-force corners, this championship is still wide open. If Mercedes suffer more ERS issues and Red Bull are there to capitalise on home soil, we may just see things begun to turn.

What do you think? Does Red Bull have a fighting chance to catch up to Mercedes or does the German team have too great a lead in the Championship? Who do you think will come out on top in Austria? Will hamilton come back fighting or will Ricciardo show who’s boss on Red Bulls home track? Let us know in the comments.