Back in February we road tested the Mercedes-Benz E 250 and found that it came out as one of the best all-rounders in its class. The full road tested review and photos for the E250 can be found here. We now take this class to the next level and see what this German brand can offer us in the form of hybrid efficiency as we road test the  Mercedes-Benz E 300 BlueTEC HYBRID. When you say the word hybrid to someone, it usually has two distinct reactions. The first one being of complete interest and wonder as economy is high on their list when they shop around for a new car. And the other reaction closely resembles the face you pull when you smell something you don’t like, and this for a vast majority of automotive enthusiasts is what happens when they hear the word hybrid. It instantly sends them into a sweat induced panic which is usually followed by flashes of driving around for eternity in something that closely resembles a Prius. Something with little or no looks or character which was only ever made to do one thing well: be efficient. Brands like Lexus have been manufacturing cars that look normal, however they still feel like hybrids to drive, as the majority of them are lacking in overall power and sluggish throttle control. Mercedes-Benz are introducing luxury hybrids with their new E-Class 300 BlueTEC HYBRID, and I am thankful to be able to say, that the future of hybrids is looking pretty good. Why is the future looking so good? Well it’s simple. The E Class 300 BlueTEC HYBRID doesn’t feel like a hybrid, and I mean that in the true sense of the word. Like Lexus this model looks the same as they regular petrol or diesel models available, the only thing from the outside that says “I am an eco warrior” is the hybrid badge on the boot lid. So thats the looks taken care of, well sort of. The E Class is no drop-jawed beauty, it’s a Mercedes-Benz E-Class, which even when you say it sounds stately and somewhat pompous, which is more accurate to what it looks like. But in saying that it does do stately very well. But this alone does not set it apart from the other brands, it’s not until you drive it that you see the difference, and if you have tested a vast majority of the hybrids out there this difference is epic. Unlike other manufacturers, Mercedes has taken a different approach. Instead of making a smaller engine that will work with their hybrid system, they just tacked it onto the existing diesel engine they already had from the E250. With the addition of the hybrid system the overall weight has only increased by 100kg compared to the E250. So before you even calculate the hybrid’s additional power, you have a 2.2 litre biturbo inline four diesel engine that produces 150kW and 500Nm of torque. There are plenty of regular petrol cars around that do not even have those sorts of torque figures. However having a good engine paired to a hybrid system is not going to just result in a good hybrid, how and when they use the power is also very important. Where this system seems to differ from many others is that it does not try to combine or share the power in a seamlessly clever way, it’s a lot more straightforward. This German brand’s approach feels like it’s one or the other. So when you are using the diesel engine you are not using the battery and when you’re using the electric motors and battery the diesel engine is turned off. At first you may think, that its just less efficient than trying to combine the power of each one. This is not the case. Having the ability to know what power source you are using, and when this power source is available enables you to make better use of it. For example, when driving the E300 on the open roads at 100 kph, and for any inclined roads, you are using the diesel engine. If you need to slow down or are going down hill the diesel engine turns off as it’s not needed for the additional torque. The same is true when entering a township, where the limit is 50km, I slowed down to the required speed and as long as the road was flat I was able to maintain 50km solely using the electric motors. This is something I have not been able to do with other hybrids, as they are trying to guess what you are about to do, and are constantly switching between power sources. Having the ability to know what power source will be used or how to engage or switch to one or the other increases your ability to drive more economically. This is a somewhat embarrassing admission, but quite relevant. Every time I pick up a car to test drive it the first thing I do is reset the trip so I can record how far I have traveled, and especially for hybrids make sure I am displaying the available range. I cycled through the dash menus, and could not find the available range. I thought this strange and thought it can not be this hard to find. What really confused me was that there were several menus with distance on them and they were all increasing as I was travelling. So like most I assumed they were all related to distance. After several more confused minutes I figured out that one of the distance menus, which should have read Range instead of Distance was the range indicator. But it was still going up as I travelled. When I picked up the car this menu had displayed a distance (range) of 1040 km, and after the first two days that figure grew to 1250km, solely based on my driving style. It was a very odd feeling as it was like you were creating fuel or winning additional km’s by driving more efficiently. At the time of writing this section I had driven the car for 411 km, and the range displayed on the dash said I had another 774 km left before refueling, which to me is pretty amazing and very efficient for such a big car. The E300 BlueTEC HYBRID’s combination of power sources and its separated delivery system removes a lot of the hybrid-like feelings from the car. You do not have to worry if you pull out into traffic, like you have to with other hybrids as their power delivery can be quite sluggish. You just put your foot down and it ignores the electric motors and delivers the full torque of the engine. It does this even quicker when you’re in sport mode, which allows the E300 to achieve 100kph in 7.5 seconds. Not bad for a car that weighs 1845 kg and only has a 2.2L engine. The interior is identical to the Mercedes-Benz E 250 we road tested previously, in an effort to avoid doubling up on details, it’s what one would expect from an E Class Mercedes, a lavish array of materials, leather, wood with some highlighted trim. It does not say sporty at all, it’s very refined, very relaxing. The rear seats are a decent size, as to be expected from a large sedan. Plenty of room for taller people, even with the front seats adjusted to for taller driver or passenger. The 540 litre boot gives you more than enough space for all your needs, but unlike some other brands the E class has a spring loaded boot lid with push button assisted to close. Something you generally see as an option on full sized wagons, however the entire E Class saloon range have this as standard. The range of hybrids for the E Class to battle with is currently quite limited, with Lexus being the only manufacture offering an equivalent system. BMW’s ActiveHybrid 5 is on the way and will hopefully offer Mercedes some stiff competition. The E Class is not the first car you would think of when someone starts talking about hybrids. However Mercedes should be very proud of what they have achieved here, it’s an amazing machine. The way they have combined the power of the diesel engine and the hybrid system is so unnoticeable that they have produced a hybrid car that does not feel like a hybrid car. This means you are left with a big luxury car that just feels like a big luxury car, with all the efficiency of a hybrid. 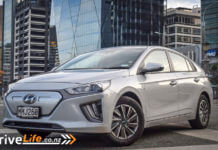