After Nico Rosberg’s slap on the wrist from Mercedes and Lewis Hamilton’s flying qualifying. it looked like it would be Hamilton’s day as he sat on the front of the grid. He seemed to have won the psychological games of the past week sixth the two Mercedes drivers came to gather on track at Spa two week earlier, eventually ending Hamilton’s race and hampering Rosberg’s.

Mercedes had done all they could with their drivers to ensure it would not happen again and threatened heavy handed action should they make a repeat of the previous race. So with his tail firmly between his legs Rosberg was expected to start on the back foot from his team mate in this weeks race at Monza. However the psychological advantage didn’t help Hamilton’s start as he bogged down off the line sending him back down the pack as Rosberg took advantage of a near perfect start and soon had a masterful control over the race, followed by McLaren’s Kevin Magnussen and Williams driver Felipe Massa.

Though it didn’t take long for Hamilton to move back up the pack to second, it was a different story for Valtteri Bottas who’s start system had a malfunction and dropped his Williams from 4th on the grid down to 10th. Max Chilton , the Briton suffering only the second retirement of his career in the sixth lap. The Marussia got the chicane all wrong and launched the car over one of the sleeping policeman which sent him into the wall, though this did not upset the race with a safety car. Then, it was on lap 9 that the cracks in Rosberg’s armor started to show. Nico goes straight on at Turn One. The German weaves his way through the obstacles on the run-off and rejoins. He retained the lead but the gap to Felipe Massa in second dropped to just two seconds.

It was a rare mistake from the Mercedes driver and one that lit up Hamilton as he made his way in spectacular passing fashion up into second and bore down on Rosberg until lap 29 where Nico Rosberg seemingly cracked under pressure. The German once again going straight on at Turn One. As he weaves his way round the obstacles, Lewis Hamilton neatly completes the first chicane and assumes the lead. 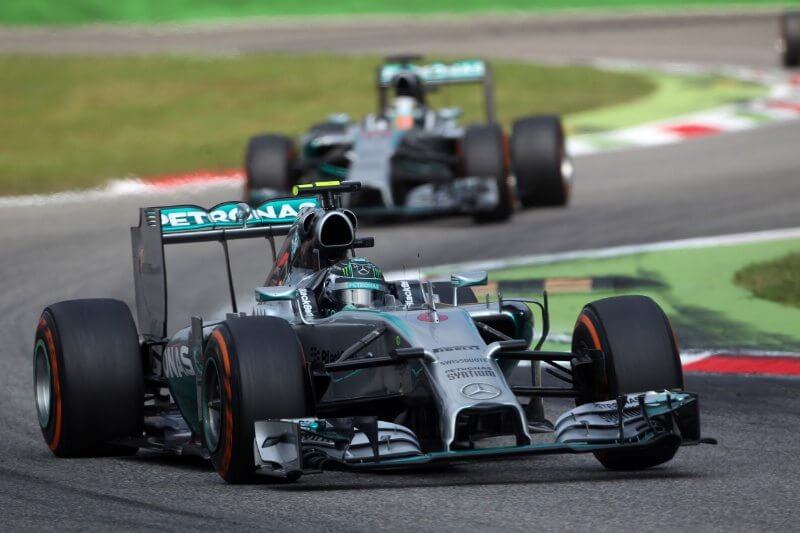 From their Rosberg dropped back slightly behind his team mate, not challenging for the lead and retaining second. Third went to a very deserving Felipe Massa for Williams and after a sensational race Valtteri Bottas comes home in fourth mirroring the grid at the start of the Grand Prix. This leaves the gap in the Drivers standings down to just 2 points for the lead as Lewis Hamilton begins clawing his way back towards his team mate into the closing half of this season. So will Rosberg recover from this blow to keep the gap open till the end or will Lewis Hamilton catch up and take the double points final to win his second World Championship?