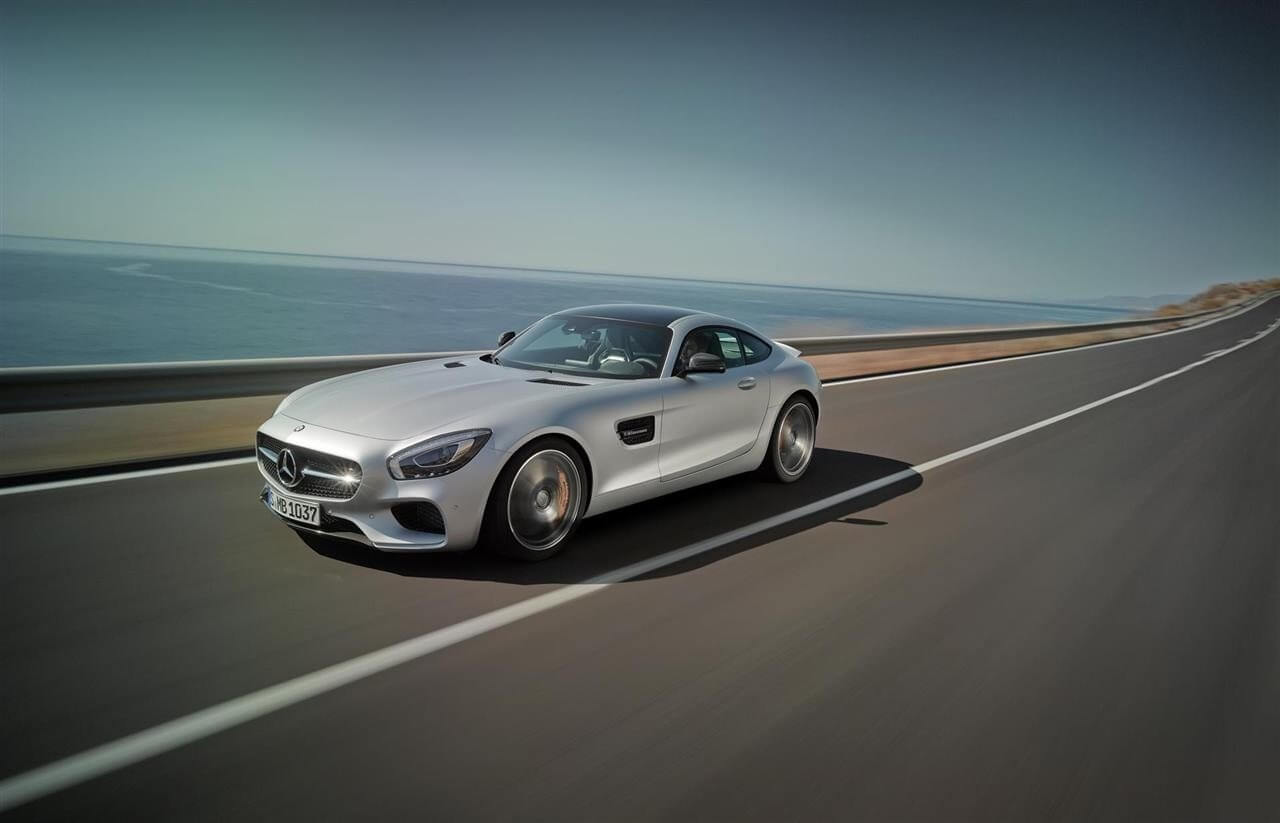 Since it’s launch the SLS AMG has been my favourite car. I knew from the moment I saw it that it would be. I remember the day, it was on a September in 2009. The SLS was unveiled at that year’s Frankfurt motor show. I remember as I had an exam that day but rather than get some last minute revision in, I spent the morning on the Internet drooling over photos of Mercedes’ new Gullwing supercar.

Today it’s more or less the same, minus the Gullwing part. Everyone, meet the new Mercedes-AMG GT. The name is important in itself as you’ll note there isn’t a “Benz”. That’s because this is the second car made entirely by AMG and they want to show it. Powering this new sports car is an equally new ‘M178’ 4.0-litre twin turbo V8. The AMG GT is the first car to showcase this new engine which will eventually find it’s way into the upcoming C63. In standard form the engine is good for 456bhp and 600NM of torque. The GT S will have 503bhp and 650NM of torque. The GT gets from 0-100 km/h in 4 second flat while the GT S shaves two tenths of a second off. Much of the GT’s development carries off from where the SLS left off. As such the GT has a updated version of the Getrag 7-speed dual clutch transmission as the SLS, which is mounted at the rear for better weight distribution (47/53). Like the SLS the GT’s body is made from aluminium. In standard form it weighs around 1540kg and the GT S weighs around 1570kg. Both variants receive a locking diff which is mechanical in the GT and electric in the GT S.

Also electric (partially) is the steering which is electro-mechanical and changes at different speeds. Other racy bits include double wishbone front suspension and multi link tears, massive brakes (360mm for the GT and 390mm for GT S) with the option of 402mm carbon ceramics. The GT comes with 19-inch wheels on all four corners while the GT S has 20-inch wheels at the rear. Inside it follows the current Mercedes design theme as we’ve already seen in the new S and C-Class. I think it looks great but then I am a sucker for red leather. It’s also an evolution on the SLS’s with the wraparound cockpit centred around the driver. A larger display screen dominates the centre console. Mercedes’ new Touch Pad system also makes an appearance in the GT. Don’t think it’s all form and no function, the boot has a 350L capacity – roughly the same as an A-Class.

Actually, looking at the dimensions it’s pretty compact. The GT AMG measures at 4546mm long, some 92mm shorter than the SLS with a shorter wheelbase and overhangs. At 1939mm wide it’s the same width so the “everyday usability” sports car tag might not be so useable given the SLS’s width was one of its biggest flaws. The GT is also 27mm taller than its predecessor for better cabin space, ironic since the gullwing doors on the SLS were meant to make it easier to get in and out. In the GT those legendary doors are gone in favour of more conventionally hinged doors. But come on, we have to talk about its styling. Like the rest of the car its an evolution of the SLS’s and if I’m honest it’s utterly beautiful. The SLS was never a car I would’ve described as “beautiful”, not in the traditional sense at least. It was a good looking car, striking in fact. It had presence and it looked “cool”. The GT AMG however has a new found elegence which the SLS never had. Maybe its the smaller dimension, maybe its the cleaner lines but there’s no doubt its worked. You still get the ridiculously long bonnet and a pushed back cabin design with a short pert bum. The 300SL-inspired side grille is there but has been toned down. It’s a classy touch. The rear is quite similar to the SLS with the sleek horizontal taillights. It actually has a liftback style tailgate (ala Aston Vantage) as opposed to a regular-style bootlid. As you can see the GT AMG is anything but conventional. So that’s the GT AMG, a smaller, sportier, and sexier successor to the SLS. It has quite the challenge of filling the boots of a legend as well as taking on other motoring greats such as the Porsche 911, Aston Vantage, Audi R8, and Jaguar F-Type. It’ll go on sale sometime next year and will be considerably less expensive than the SLS, reports suggest it’ll cost as much as half as much as the SLS GT or in the region of $250k. But am I, whose favourite car is/was the SLS AMG convinced? Well the size, price, looks, and interior point in the right direction. I’ll have to reserve final judgement until I see and hear one in real life but on first impressions it’s a worthy addition to Mercedes’ long history of über desirable GT supercars.