After being denied a fierce battle in Japan due to Vongfong, no that isn’t a cheep Vodafone knock off but a typhoon that brought the race to an end on lap 47 following the horrendous crash of Marussia’s Jules Bianchi, we now head into the relatively unknown in Sochi Russia, home of the Winter Olympics and now home of a bespoke Formula 1 circuit. The snail like circuit sits on the shore of the Black Sea and is so fresh that it’s tarmac is a stark black against the predominantly white facilities surrounding it. Made up mainly of straights and 90 degree bends, getting the balance of downforce and break bias will be key to victory this weekend. Though speed will be an advantage we have already seen mistakes this year from Nico Rosberg in tight corners and the Mercedes cars still struggle a little on break wear so this race is anything but predictable as we enter the closing stages of this season on our way to double points in Abu Dhabi in four races time.

Who do you think will come out on top in Russia? Will Mercedes dominate Sochi or will Red Bull come back after a strong showing in Suzuka to keep Daniel Ricciardo in the championship running? Will Alonso find yet another Russian Model Girlfriend to add to his collection? Let us know in the comments below or join the conversation in the Forums. 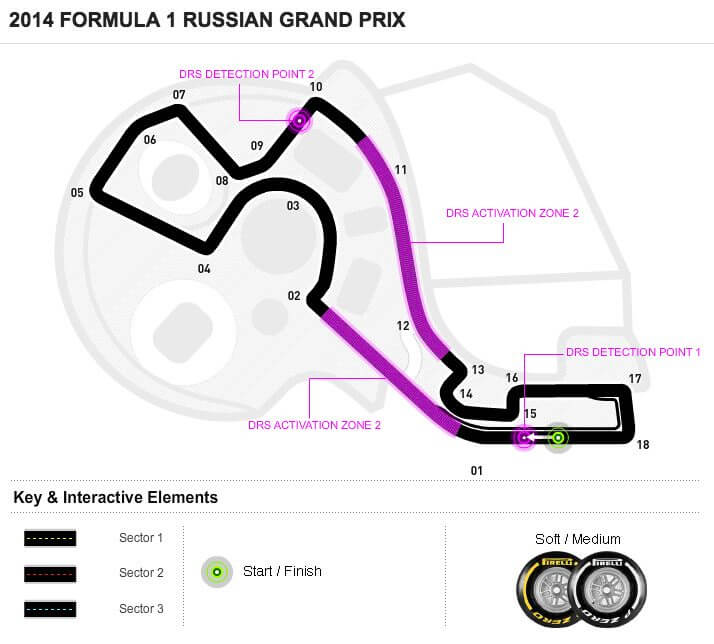 The Sochi circuit, located in the Black Sea resort of the same name, is the first purpose-built Formula One facility in Russia and hosts the country’s inaugural Grand Prix in October 2014, in the same year that the city also stages the Winter Olympics.

Sochi’s Formula One relationship formally began in October 2010, when an agreement to host a Grand Prix was signed between race promoters OJSC Center Omega and the Formula One group of companies, with the support of the Russian government and in the presence of Vladimir Putin.

Construction of the 5.853-kilometre track has come under the design supervision of renowned circuit architect Hermann Tilke. The circuit is integrated into the Olympic Park infrastructure, with facilities located in close vicinity to the Olympic Park railway station and to the roads which connect the Olympic venues with Sochi International Airport.

The track width varies from 13 metres at its narrowest point to 15 metres at the start-finish line. The circuit, which runs in a clockwise direction, consists of 12 right- and six left-hand corners, and combines both high-speed and technical sections. Formula One cars are expected to reach a maximum speed of 320 km/h on the 650-metre straight between the first and second turns, with an average lap speed of around 215 km/h.

“The circuit is going to be very fast and technical and offering a number of interesting features,” says Tilke of the 55,000-capacity venue. “It is a fantastic facility with a great atmosphere and it will be outstanding as the circuit will run through the Olympic Park. I am very optimistic about the future of the unique racing track in Sochi, and am looking forward to a triumphant start of Formula One racing in Russia.”