Okay, okay. I need to remember how to breathe because the new Honda Civic Type-R has taken my breath away. When I say “new” it’s not actually even made yet – it’s that new. This is actually the Civic Type R Concept bound for the Paris Motor Show and it looks epic. It looks like the creation of some sugar crazed 12-year old. Honda must’ve literally got schoolboys high on Red Bull to design this. It looks epic. And look at the wing! That’s like something out of a Gundam manga. Notice how the taillights are actually integrated to it. Remind you of anything? NSX perhaps? Despite its fantasy features, you could pretty much slap a WOF and Rego sticker on this baby. It looks ready to go.

And go it shall. We’ve seen the Type-R concept before at the Geneva Motor Show earlier in the year but we now have numbers to match its bonkers looks. The new Type-R is said to be the fastest and most driver focused Civic ever. It’ll have an all-new “Earth Dreams” 2.0-litre turbocharged i-VTEC engine. Rumours suggest it’ll be pumping out “around 276bhp and 410NM of torque”. I can imagine it’d be fast and very furious.

It’ll be a screamer too, as with keeping true to its VTEC-ness. It redlines at 7000rpm and drivers will be able to manage revs and gears via a 6-speed manual transmission. Yes no dual-clutch malarkey here, this thing will have a proper manual complete with a gear stick and three pedals. You have permission to make a childish squeal. Honda are claiming a 0-100 km/h sprint of under 6 seconds. To be honest it could have a 0-100 km/h time of 6 weeks, as long as the production version has a manual I’m sure every petrolhead in the world will be able to forgive it for anything.

Engineers have been testing the Type-R not at Suzuka, Fuji, or Tsukuba but instead at the Nurburgring. They’re so confident in their car that they’ve taken it to the Green Hell to give the current front-wheel drive champ, the Renault Megane RS275, a run for its money. At the moment the RS275 has set a world record time for a front-wheel drive car of 7 minutes and 54.3 seconds. It’ll be interesting to see how the Honda will fare.

The Type-R will come with new specially designed technology to make it racy and help break the record set by the RS275. It’ll have Adaptive Dampers which apparently offer a comfortable ride in normal mode and then stiffened for agility and high performance driving. There’s also a system which reduces torque steer and it has a new button.

Every man knows a pressing the right button can be rewarding and this particular button promises to be very stimulating. It’s called the +R and what it does is, well, it pokes the car with a pointy stick. The +R button makes everything angrier than a sumo wrestler that’s stepped on a piece of Lego and as crazy as a Japanese game show. It should’ve been called the Type-Grrrrr. Excited? I am. Banzai! 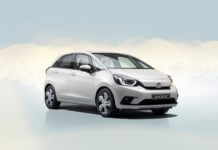 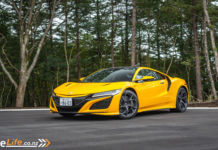