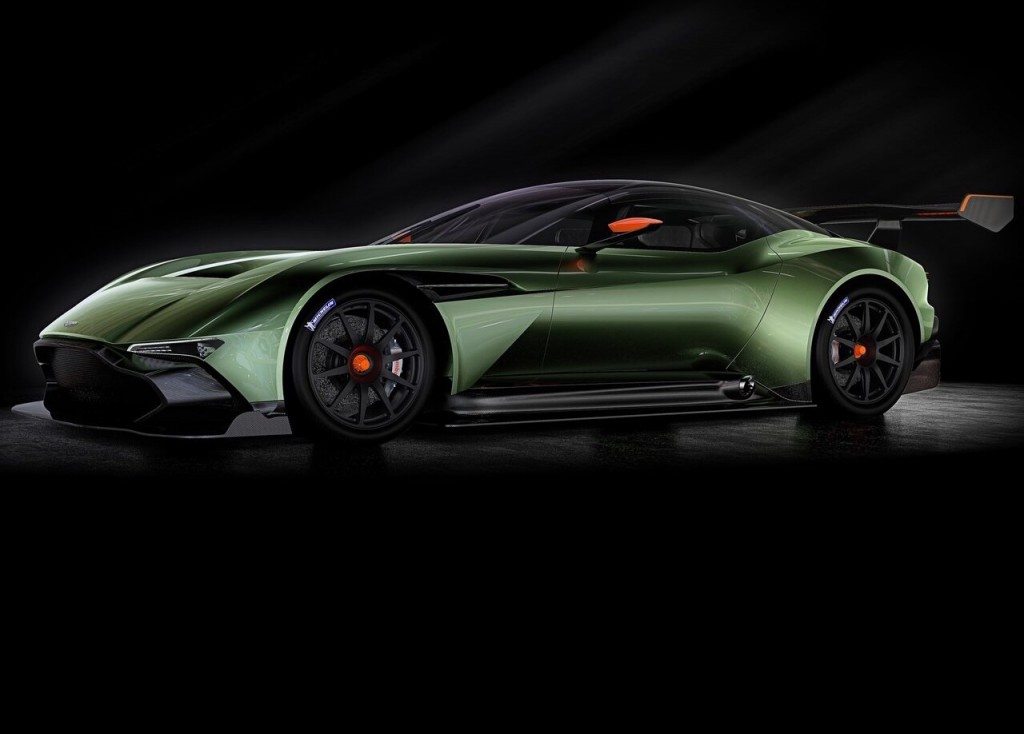 Vulcan, now that’s a name. Apparently the name is from the Cold War bomber that was stationed at where Aston Martin’s headquarters now stands at Gaydon. Vulcan is also the Roman god for volcanoes, a type of Gattling gun, and a planet from Star Trek. This car has a lot to live up and luckily it has all the right ingredients to do its name justice.

Powering the Vulcan is the most powerful version of Aston Martin’s V12 engine ever. Pumped out to 7.0-litres, Aston’s near 20-year old V12 is now good for over 800bhp in all its naturally aspirated glory. Official performance figures aren’t out yet but expect it to be dangerously quick. Aston claims the power-to-weight ratio of the Vulcan exceeds those of FIA GTE cars. The engine is a front-mid mounted affair and power is sent to the rear wheels via a six-speed sequential Xtrac gearbox. As the Vulcan is a track-only car it comes with equally track ready tech. Aston Martin’s Racing division has thrown everything at the Vulcan so you get pushrod suspension, adjustable dampers, magnesium torque tube, carbon fibre prop shaft, 380mm/360mm carbon ceramic Brembo brakes, variable traction control, and adjustable anti-lock brakes. Oh and the carbon-fibre tub is a modified version of the one found in the super-exclusive and super-expensive One-77.

If all this sounds good then there is some bad news. Unfortunately it does cost around £1.5 million ($3 million) and all 24 cars have been sold. That is an eye-watering amount of money, costing more than a Bugatti Veyron, LaFerrari, and even the One-77 but the lucky owners of the Vulcan do get some lovely extras. Each Vulcan will have an endless choice of personalisation options so that no two cars are the same.

Aston will also provide special track days and races for the owners and unlike Ferrari’s FXX programme will allow owners to take it to other tracks around the world. Owners will also get special training on the track in cars such as the Vantage GT4, V12 Vantage S, and One-77. That’s a brilliant touch. If I’d just spent that much money I’d expect at least a One-77 as a courtesy track car.

Now we must get on to the way it looks. I could talk about how its lines are the perfect blend of muscle, beauty, and terror or how the interior looks like it was designed by Darth Vader and how the rear wing is so big it has its own postcode. But I think the photos speak for themselves. While Aston won’t be making a fully road legal version, expect some of the design elements of the Vulcan to preview what to expect for the next generation of Aston Martins. It’s Aston’s most extreme car ever and it perfectly represents Astons of the past, present, and future. This thing is all sorts of pretty and scary. A car’s name has never been more appropriate since the Nissan Cube.