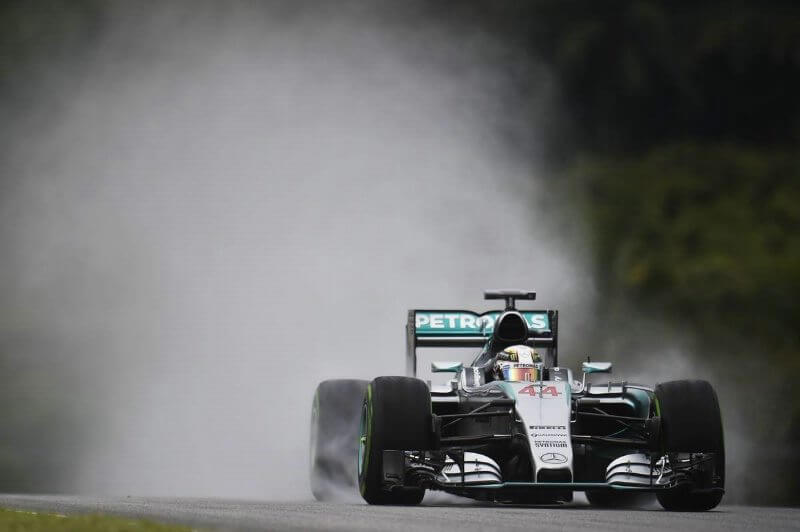 They said it might rain. They always say that in Malaysia. This time however it was more than a dark cloud and a few spits to make a team principal nervous.
Torrential rain saw the later part of Qualifying a slightly more gingerly yet extremely compeditive race to pole position. Lewis Hamilton continues his championship pace placing himself on poll but only just ahead of Sebastian Vettel’s Ferrari by a hundredth of a second. Whether Ferrari’s pace was raised by the rain we can only wait to see on race day but the German has the best chance of anyone on Sunday to give the Dominant Mercedes team grief. Hamilton teammate sits just behind his teammate on the grid in third beside Daniel Ricciardo in the Red Bull who looks far more comfortable after a difficult Melbourne Grand Prix.
Williams are kicking themselves after a great practice session that saw them neck and neck with the Ferrari only to make a bad call and send out hie cars a little late in qualifying, landing them in the worst of the downpour and landing them toward the rear of the top ten on the grid. Meanwhile, speaking of the rear of the grid, McLaren really do look to be facing their worst season as they once again sit on the last row, though at least they have two cars this time with the return of Fernando Alonso after being cleared to race by his doctors.
With the rain out of the way we are likely to have a dry race. So will Ferrari have the pace to share down Mercedes or will the German team run away with yet another untested victory? Let us know your thoughts in the comments or on FaceBook.
-Roger Baillie (@Rojn8r)

Full qualifying results for the second round of the 2015 Formula 1 World Championship (F1), the Malaysian Grand Prix at Sepang.