As you will already be aware, the New Zealand Police instigated a reduced tolerance in speeding tickets or this summer from the usual 10kph to 4kph. They even said they would reduce it to 1kph for most of December.

Nearly 250,000 drivers were ticketed in December and January for driving at speeds up to the usual tolerance of 10kmh over the limit. However, the tolerance had been reduced from ten to four kilometres per hour over the limit.

This amounted to more than $7.3m in fines – an increase of about 4650% on the summer of 2009, before police began using the lower tolerance during holiday periods.

Has this focus on speed reduced the road tool or number of accidents? It would appear not.

The Ministry of Transport statistics for Holiday period road deaths during the last ten years show that the number of crashes seems pretty consistent, with no sudden and dramatic drop when lower speed tolerances were introduced.

The complete stats for the last 50+ years show a gradual decline in the Christmas period road deaths, more likely because of safer cars than anything else as the speed limits have remained consistent 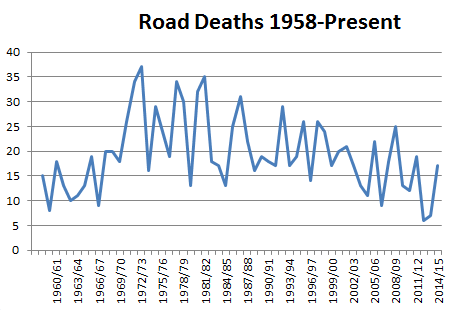 During the 2014/2015 Christmas holiday period there were 14 fatal crashes resulting in 16 deaths.

11 of the fatal crashes occurred on the open road.

Provisional crash reports indicate that alcohol and/or speed contributed to 10 of the 14 fatal crashes. Driver fatigue is suspected for 2 of the fatal crashes.

I would like to know the breakdown of how many crashes were caused by each as they seem to imply that driving while over the limit and speeding are similarly serious.

This comes down to the usual problem. Focusing on speeding is easy. It’s quantifiable. It’s easy to catch people doing it. Everyone will do it at some point, either through inattention to their speed, deliberate speeding, impatience or whatever other reason. And you can’t argue with the fact that the faster you crash, the bigger the mess is likely to be. What’s not true is that speeding itself causes accidents. Inappropriate speed for the conditions, impatient drivers, dodgy overtaking, New Zealand’s relatively poorly trained drivers, poor decisions at junctions, very dark rural roads at night, alcohol and drugs in people’s systems, poorly maintained vehicles etc etc

I got a speeding ticket this week. First one in nine years and tens of thousands of kilometers. Following an older car that had been doing a constant 80kph we came to a long straight. 1km of clear road ahead, dry conditions, in a car capable of 250kph. So as safe as conditions could be. I pulled out and accelerated past, intending to stay on the wrong side of the road as short a time as possible, pull in and slow down, cruise control back on at 100kph. But the police officer hiding behind a bush clocked me at 122kph. The old bloke I passed was probably laughing his head off as he cruised past me and the police. I can’t argue of course. I broke the law and will pay the $170 fine. But I’m annoyed with myself because I rarely speed, pull over to let others overtake if they want to go fast, and I am careful to overtake only when I’m 100% sure it’s safe.

So what’s the solution to policing our roads and reducing road deaths? Clearly targeting speeding is the solution to having a really good policeman’s ball this year, but it isn’t helping to save lives.