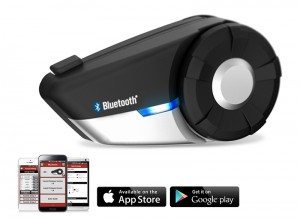 After a string of cheap and nasty headsets for my daughter and me on our bike rides, I finally bit the bullet and went quality. It was an impending trip to Auckland to ride back a ‘new’ bike that prompted the purchase; I wanted to be able to talk to her, listen to music and call my wife now and then to reassure her that we were still alive and well and on our way home.

After many hours of research (what on earth did we do before Google?) I decided to go the whole hog and bought a pair of Sena 20S bluetooth headsets. These are the latest and best from Sena. They came in a twin pack, which did save a few dollars on the deal. And save they needed to do – the pair cost me the best part of $800. Was it worth it? Totally. 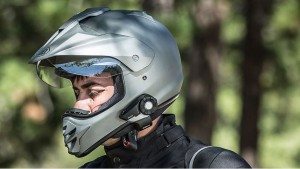 The quality of these units is nothing short of amazing. I can call someone while doing 100km/h on the open road and talk to them. They may not even guess that I am riding. I have a modular helmet, where you can open the front up to make it easier to put on and take off. Incredibly, the sound quality with the front open at 100km/h is about the same as with it down – no wind noise through the mic at all. You have to try it to believe it. Sure, riding around town the sound quality is excellent, and definitely better than on the open road, but boy is it good regardless.

Then comes the music. While I haven’t been a fan in the past of wanting to listen to music while I ride, it’s a McDonalds experience – I am loving it. The 20S has a large jog dial on it, so you can easily turn the volume up or down for your music while you ride, even with thick gloves on. In fact the unit is so intelligent that it remembers the volume you have chosen for whatever mode you are in (phone, music etc) so when you are listening to music at a certain level and a phone call comes in, the volume of the phone call is whatever it was last time you made/answered a call. Great stuff.

I guess using the intercom and listening to music are the two most common features my daughter and I use. We generally leave the intercom open, so if we talk it kicks in and mutes the music (but not completely) and then when you have both finished talking, the music goes back up to the normal level. I am only caught out by this when I start singing (badly) and forget the intercom is on. I can neither confirm nor deny my daughter has caught me out singing about boys having a little more booty to hold at night (hey it’s in the lyrics!).

The 20S has a radio built-in as well (apparently it uses the speaker wires for an aerial) but I never listen to the radio so can’t comment on that function.

For best effect, the 20S has a little pop-up aerial for better distance if you are using them between bikes. We don’t notice much difference between rider and pillion but we put them up anyway, they look quite cool. 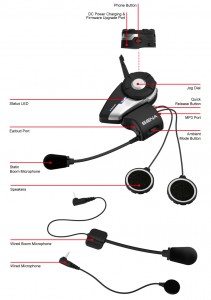 Battery life if pretty amazing too. We can last a day’s ride without needing a charge. You can charge the unit while you ride (it comes with a cigarette-USB charger in that box of goodies) if needed, but really you only need to charge it at night. From memory a full charge takes about 3 hours, from flat.

There are a number of ways to control the 20S. If you don’t have the intercom on, you can just say ‘hello Sena’ and she should chime in with, ‘say a command.’ I keep waiting for her to add ‘master’ to the end but she never does. From this point you can do a number of things; check the battery level, speed dial someone (their number needs to be in the Sena app on your phone), turn intercom on or off, etc. The problem for me here is often I end up saying ‘hello Sena’ over and over and she ignores me. Typical. So all I do is hit the phone button on the back of the 20S while I’m riding, and use Siri on my iPhone instead. This is much simpler – I’m used to Siri so can just dial by name, or play any playlist I want (I’ve created a separate ‘bike playlist’ for my roadie songs) or anything that Siri will do for you.

If you don’t want to use Siri and aren’t keen on saying, ‘hello Sena’ lots, you can just double-tap the 20S twice in quick succession and this will get Sena talking to you, waiting for a command. There is a certain place you have to double-tap and the speed of the double-tap needs to be just right, but with practice it becomes pretty easy. My daughter doesn’t have an iPhone, and I often feel her tapping her helmet behind me and saying, ‘next…tap-tap…next’ when she wants to change songs.

I mentioned the Sena app. It is pretty good, if a little basic. You download the free app, add any friend’s 20S into the app so they become part of an intercom group (you can have up to 6 separate groups, as well as group intercom) and set your preferences. There are about ten settings you can adjust or turn on/off, as well as adding some radio station presets. 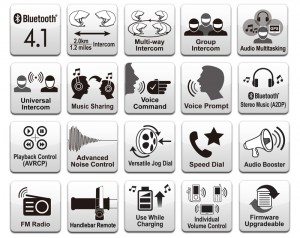 Pairing two 20S intercoms is easy. You shake them both until the lights flash blue and then wait. Then they pair up. Yup, it’s that simple.

When we flew to Auckland to pick up the bike, the intercoms were waiting at a friend’s place. Here goes a few hours to install, I thought.  I needn’t have worried, it was all quite simple and we had them installed in both helmets in an hour. The first helmet took 45 minutes, the next one was quick. The speakers are great – don’t expect massive bass out of them – but I am more than happy with them. Some people buy different speakers, as the 20S will take other speakers if you want. It also comes with a boom mic (perfect for our modular helmets) and a fixed mic as well. In fact the box was overloaded with all sorts of goodies – multiple pieces of Velcro for speaker installation, and even a printed manual of decent thickness. 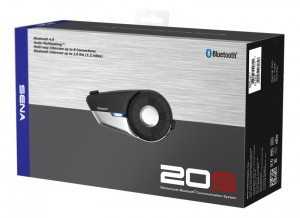 There are purists who will say it’s all about the ride, not music or making phone calls, or talking to other riders. I used to think that as well. But it has transformed the ride with my daughter as pillion. We can chat as easily as we would in the car about other drivers, the mountains and how awesome they look – just the same things you would in the car. I spoke to a friend who regularly rides with 2 or 3 friends, who all have intercoms. He agrees – it has transformed their rides. Not only do they give each other a hard time while riding (I won’t use their language here), they can also call out if they see gravel on the inside of a corner, or a dangerous driver, or “smokey coming up”, just in case they see a bear at the side of the road.

I believe once you have had an intercom on your helmet, there’s no going back. Transform your ride and try out a 20S. Just don’t blame me when you won’t go for anything less.