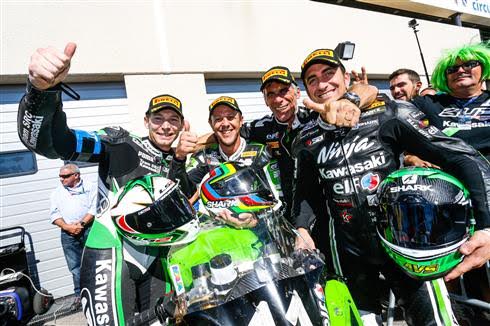 Gregory Leblanc, Matthieu Lagrive and Fabien Foret took a fantastic Bol d’Or 24 Hour victory. The Team Kawasaki SRC was rewarded with a fourth consecutive Bol d’Or victory, as the race came back this year to the Paul Ricard racetrack at the Castellet.

The Team Kawasaki SRC and one of its riders, Gregory Leblanc, took a fourth consecutive Bol d’Or victory. It’s also the eleventh victory for the Kawasaki brand at a ‘24 hours’ round.

The race was marked by many unexpected developments, which did not spare the Gilles Stafler team.

The raced started well though as Gregory Leblanc took the lead from the second lap. But a wrong tyre choice, not on par with a track which gets very cold due to a strong Mistral wind, a fuel shortage occurring at the end of a shift and a coast down the pitlane come back with the secondary chain breaking all troubled the team’s race plan.

Issues also affected the competitors but Gregory Leblanc, Matthieu Lagrive and Fabien Foret managed to deal with pressure and race issues to get their first victory in this rather difficult season.

Two other Kawasakis took honours on this 79th Bol d’Or. The privateers Tati Team Beaujolais Racing took a Superstock class victory and a fourth overall position, just near a podium only placed upon by official teams.

In fifth place was another private Kawasaki, Team Traqueur Louit Moto 33, second Superstock and winner of the 2015 Superstock World Cup.

After a great start, a crash deprived the Bolliger Team Switzerland from finishing the race.

Gregory Leblanc: I did not want to think about a fourth Bol d’Or success during the race. We had no time to think anyway. Each time we took a small lead we had a small issue. This race was nervewracking!”.

Matthieu Lagrive: After a difficult season we had with our two Suzuka and Oschersleben DNF results, we had to score a win this year but it hasn’t been easy”.

Fabien Foret: I really enjoyed this race but I also wanted to make up with my Le Mans mistake which gave victory to SERT”

Gilles Stafler: I really wanted to win here because we are at home. I did my first Bol d’Or here at Paul Ricard in 1986 and we are members of the Paul Ricard MC. But we also had to make up our Suzuka and Oschersleben disappointing results. Before Germany, we had never blown up an engine during a race”.