2016 Kawasaki Racing Team duo Jonathan Rea and Tom Sykes completed a two-day test at the Jerez de la Frontera circuit in Spain today, with positive end result for each rider. Most of the key elements of Kawasaki’s 2016 Ninja ZX-10R were evaluated at this test, in readiness for the next one in two week’s time – then ultimately a full season of competition in the FIM Superbike World Championship next season.

After trying out some new model components at a one-day Jerez test last September, shortly after winning the Riders’ Championship, Rea did some comparative testing between 2015 and 2016 material at the beginning of this test, before sampling the full 2016 machine for the majority of the time.

Jonathan set a fastest lap of 1’40.6 on the 2016 bike, which is the full WorldSBK spec race version of the new 2016 showroom model, recently unveiled to the world in Spain. He completed 114 laps in total.
Sykes tried both 2015 and 2016 components and machinery at this test but ended up with a more or less complete 2016 set-up in readiness for the next test for the team, to be held at Motorland Aragon between 16 and 17 November.
Jerez delivered two valuable days on track for Tom, who posted a best lap of 1’41.0 and 117 laps in total, despite losing some time due to damp weather each morning at the 4.423km long circuit in Andalusia.

Jonathan Rea stated: “Honestly, testing is not my favourite part of the job but it has been necessary to make a really constant effort because Kawasaki has brought many new components for the 2016 bike. It has quite a different character from last season so we had to evaluate many things. The main thing was the chassis balance of the bike and we have some positives from that. The engine character is quite different to the 2015 bike as well so we have been working with the electronics to maximise that and make it suit my style. We got through the vast majority of the test items and we are happy because we were able to lap a lot faster than we did during race weekend, with a similar temperature. So that is encouraging.”

Tom Sykes stated: “Overall the test was pretty good. We had some issues to deal with but yesterday started well considering the condition of the track early in the morning. Our plan today was to work through a lot of things, some interesting components. All things considered I am happy with the progress of things. I also hit a bird today, and during a good lap! That caught me by surprise and I had to enter the pits because of the impact. The bird hit the screen and then hit me in the front of my crash helmet, right on my visor and chin bar! On the whole, it was a good test and it has set us up to be ready for the next one.” 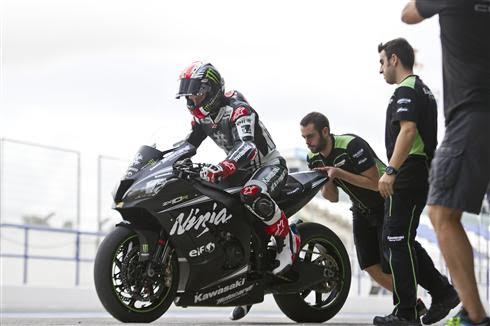 Pere Riba, Jonathan Rea’s Crew Chief, stated: “We started with a mix between the 2015 and 2016 machines to start to follow the programme of understanding the good points from 2015 and the good points for 2016. Then, after some laps going out and in, we changed to the 2016 bike and we started to focus on that programme. There is quite a lot of difference on the engine side because there is a different inertia and other details in the engine. Also, the 2016 chassis so it is essentially a new bike. Because of this we have to understand every single change we make in the set-up of the engine and chassis. We are really happy with the results because we reached nearly 90% of the items we wanted to test. We improved the feeling of the bike for Jonathan step by step and at the same time the lap time was good. On race tyres we did a kind of simulation and the race times were already much faster compared to the fastest race at Jerez this year.”

Marcel Duinker, Tom Sykes’ Crew Chief, stated: “The track was not perfect in the early part of the day but we still continued with the testing schedule we started in Motorland Aragon and we confirmed the chassis set-up we developed there. So now that was done that on two different tracks and the performance was on a good level at each. We were at around 99% of the 2016 specification of the machine at the end of the tests. I think Tom did 64 laps on the first day and 53 on the second day and he set a lap of 1’41.0 on the final day, on race tyres.”