AutoClique were recently invited to the New Zealand launch of the BMW X1 and 3 Series LCI. I recently drove the the 125i, and enjoyed it immensely, so I was looking forward to trying out these two new models from BMW. After an introduction from BMW New Zealand’s new Managing Director Florian Renndorfer, and a presentation on the new cars, we headed out to the car park at BMW HQ to check them out.

SUVs are never the prettiest of vehicles in my opinion, but the X1 certainly has presence. It is instantly recognisable as a BMW, and a member of the X family. Built on the same platform as the 2 Series and the 3 and 5 door MINI, the X1 is available in XDrive 4×4 and SDrive front-wheel drive variants. Front wheel drive cars are a recent development for BMW, but they reckon the majority of X1s sold will be front driven. There are several engines available, all four cylinder turbos, ranging from 110 to 170kW in petrol or diesel. 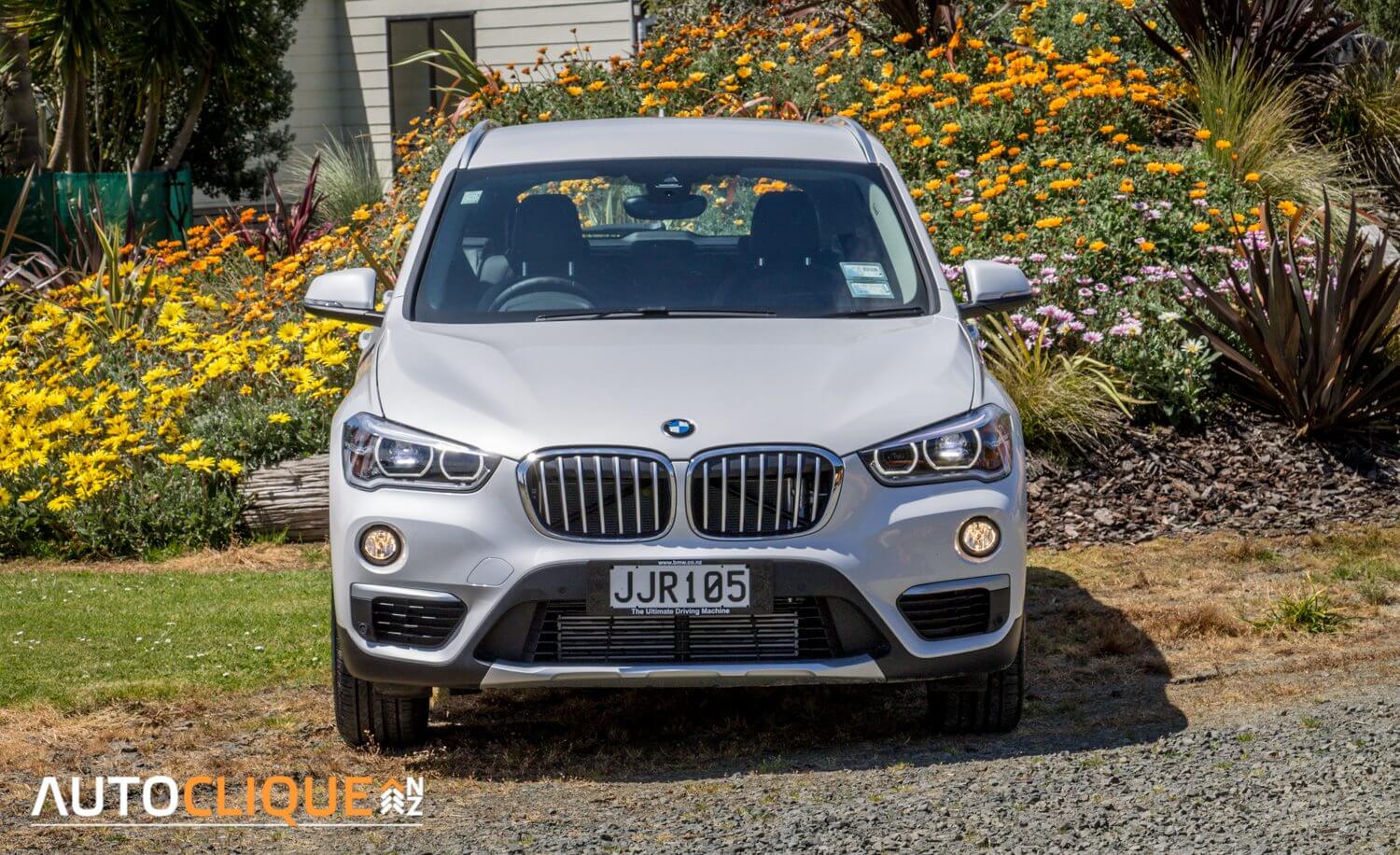 Trim levels and options varied between the three test cars available at the launch but all were XDrive20d models. They had the 140kW 2.0 litre turbodiesel engine, mated to BMW’s excellent 8 speed automatic transmission and the XDrive 4×4 system.. The X1 is available in 13 colours – two blues, a brown, two blacks, and a variety of whites and silvers. I guess bigger cars suit more muted tones, but some actual colours would be nice to see.

The interior of the X1 is really nice. Good quality plastics, real metal trims, and some gloss black accents. The first car I drove was the white XLine and I thought it had the best seats. Comfortable with good side support, and electrically adjustable in many directions to get the right seating position. BMW calls the seat material leatherette, it’s a pretty good facsimile and I assumed it was real leather at first. The 125 models come with seats trimmed in genuine leather, and of course you can option it on the other models if you like. The instrument cluster is clear and simple with a big speedo and rev counter, analogue fuel and l/100km dials and a small colour digital display at the bottom. There’s a good sized central touch-screen for the satnav and media system. Looking at the photo there seems to be a large number of buttons, but when you’re in the car it’s all laid out logically and is easy to use. The dual zone climate control is easily set up using knobs and buttons, everything has switches where you’d expect. The satnav and car settings are controlled using BMW’s iDrive system, the latest version of which is intuitive to use. 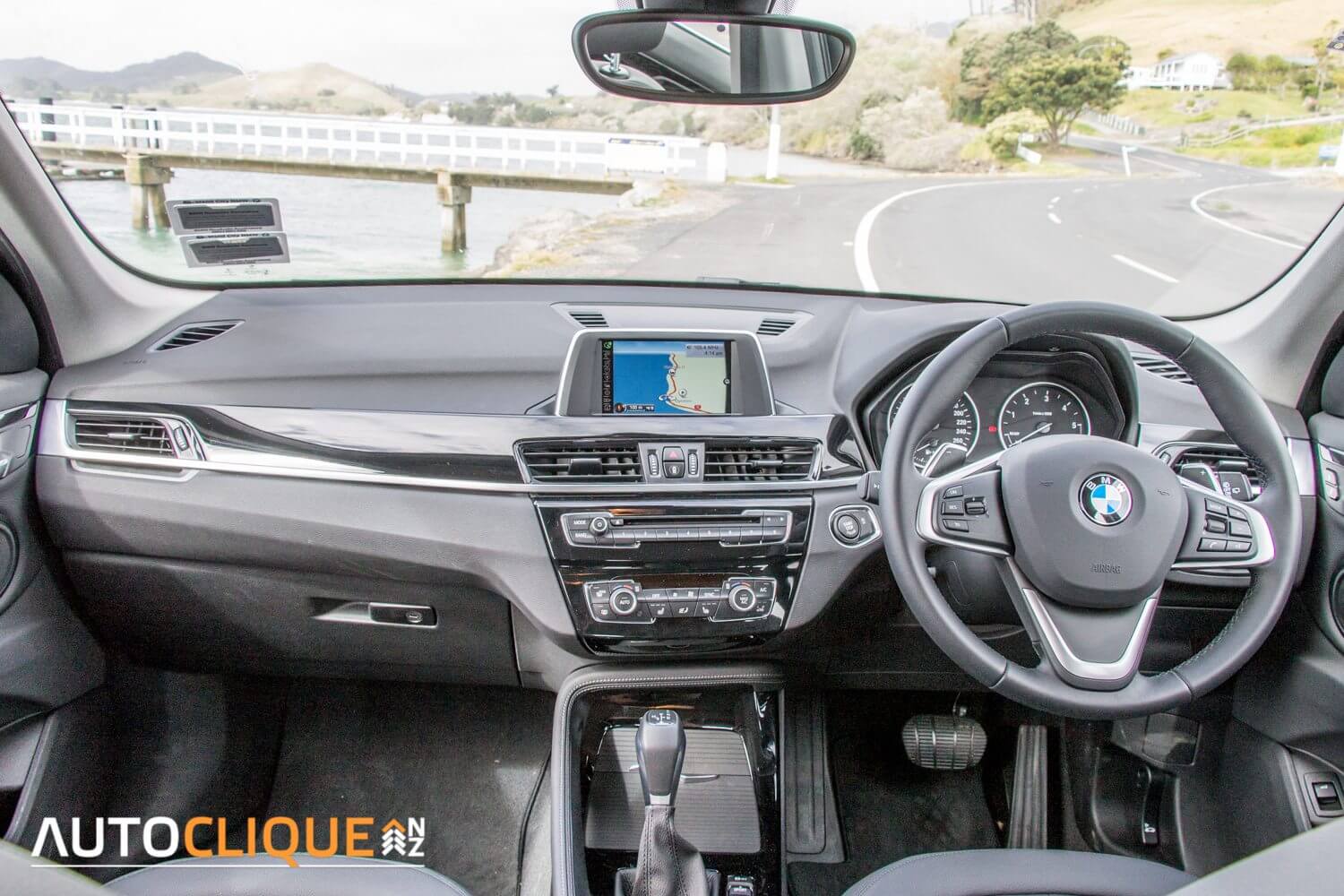 As standard you get Active Guard, which warns of potential collisions and will brake for you at low speeds. Radar-guided active cruise control is available as part of the $2500 Driving Assistance Plus pack along with Lane Departure Warning, Person Recognition, Speed Limit Info, High Beam Assist, and an upgraded instrument display screen. Some pretty clever technology which would be great for safer city driving.

Talking of safety tech, the X1 also has Dynamic Stability Control, ABS, Brake Assistant, Dynamic Brake Control and Dynamic Traction Control. There’s a five star safety rating, airbags for everyone, and should you be involved in a crash the car disengages the central locking, switches on the interior lights and activates the hazards. It also activates a safety battery terminal clamp and shuts off the fuel pump, then it will call emergency services via the ConnectedDrive system and give them your GPS location. Clever. 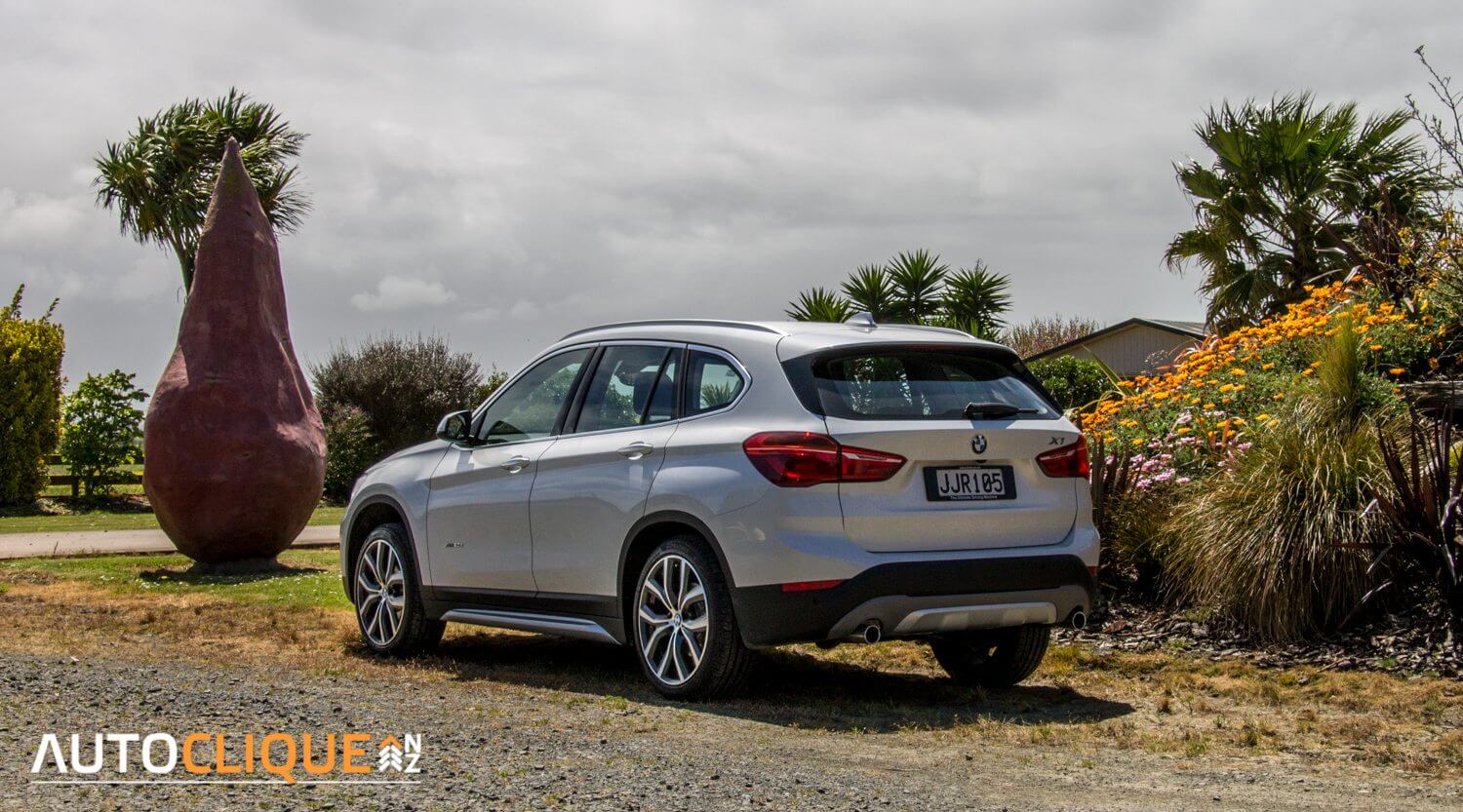 The X1 launch consisted of a drive from BMW’s Auckland HQ up to Omapere via some excellent driving roads, swapping cars periodically to get a feel for each model. On the smooth surfaced Auckland motorways the X1 was quiet with minimal wind and tyre noise. The suspension was firm but soaked up the bumps well. I’m a big fan of BMW’s cruise control implementation, set up using buttons on the steering wheel and very neatly integrated into the speedo dial. Once we were onto the rougher surface of the country roads the noise from the 18” run-flat tyres became more pronounced, and in the car with the optional 19” wheels it was uncomfortably loud at times. If the car is to be used for longer trips I’d definitely stick with the smaller wheels.

The X1 has BMW’s usual driving modes: Eco Pro, Comfort and Sport. There is a very noticeable difference between them. Eco Pro softens the throttle and gives an eco score on the dash display to show you how many extra km you’ve gained. Comfort is the normal mode. Sport sharpens up the throttle response and makes a big difference in the driving feel of the car. There’s also a Sport Plus mode which tones down the driving aids such as DSC and engages an electronic differential lock. For a relatively tall and high vehicle, the X1 corners in a remarkably level and controlled fashion. Into the twistier roads I began to realise just how capable the chassis and 4×4 system was, and I started to take corners quicker and quicker as I gained confidence in the car. There was never any drama, with the car just flowing through corners with no apparent effort.

The X1 has a system that BMW call Performance Control which uses targeted braking to distribute optimal torque to each wheel to give maximum grip. I experienced this when a corner tightened unexpectedly half way around: I kept the throttle steady and I could feel that the safety systems were activating. The car just held its line and went around the corner. Impressive stuff. The turbodiesel engine is superb, with plenty of torque available. Combined with the eight speed automatic it makes the X1 a pleasure to drive, and surprisingly good fun too. It’s easy to forget that you’re driving such a big car, which is partly down to BMW’s trademark 50:50 weight distribution. The gear selector can be pushed to the left to put the car into manual shift mode, and either the lever or paddles behind the steering wheel can be used to shift gears. Most of the time I left it in drive as it always seemed to have the gear I wanted anyway. I arrived at our destination 300km later feeling exhilarated by the drive. Not what I expected from a diesel SUV!

Most of the day had been about driving the cars, with hardly time to check out the rest of the features, so it was time for a proper look around. The rear seats are almost limo-like, with loads of leg and headroom. The boot’s huge too – over 500 litres with the seats up, and under the boot floor there’s an extra 100 litre storage cubby. The seats are split folding 40/20/40 so you can carry long things and still have three passengers.

The LED headlights are automatically activating, as are the wipers. And I didn’t get too irritated with the auto wipers, so they must be pretty good. The X1 will park itself if you want, both lateral and parallel parking. As usual with these systems the car does the steering and you do the starting and stopping.

There are front and rear parking sensors as well as a reversing camera which has two sets of guide lines – green ones for where you’ll go with the current steering position and red ones to show where full lock will get you. The electric power steering is nice and light when parking but it still felt properly weighted on the open road.

SUVs are a huge market worldwide for all car manufacturers and the biggest market section in New Zealand, and sales are still increasing. I’m not really a fan of how they look, and I didn’t expect to like this one as much as I did. BMW really have done an excellent job with this car. 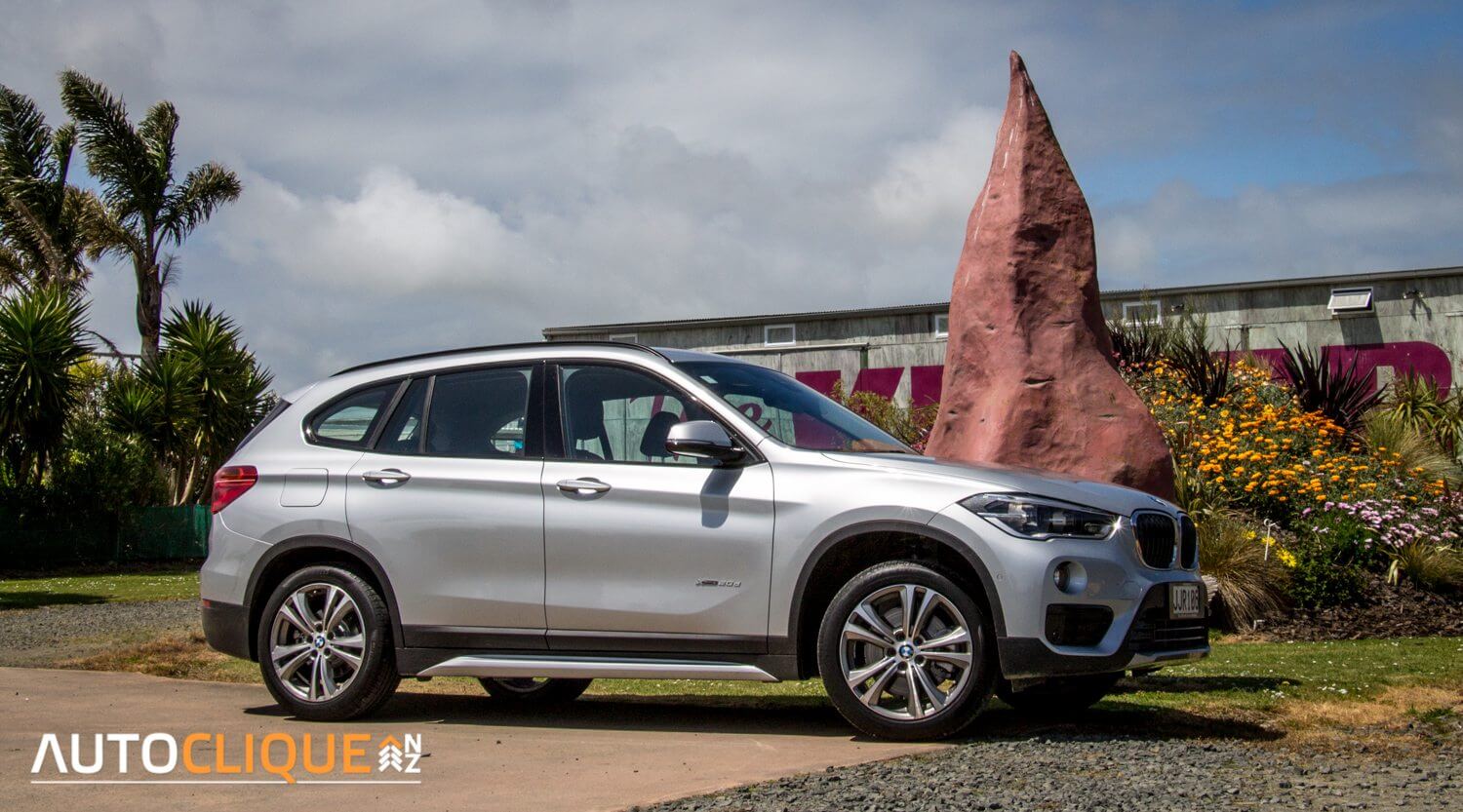 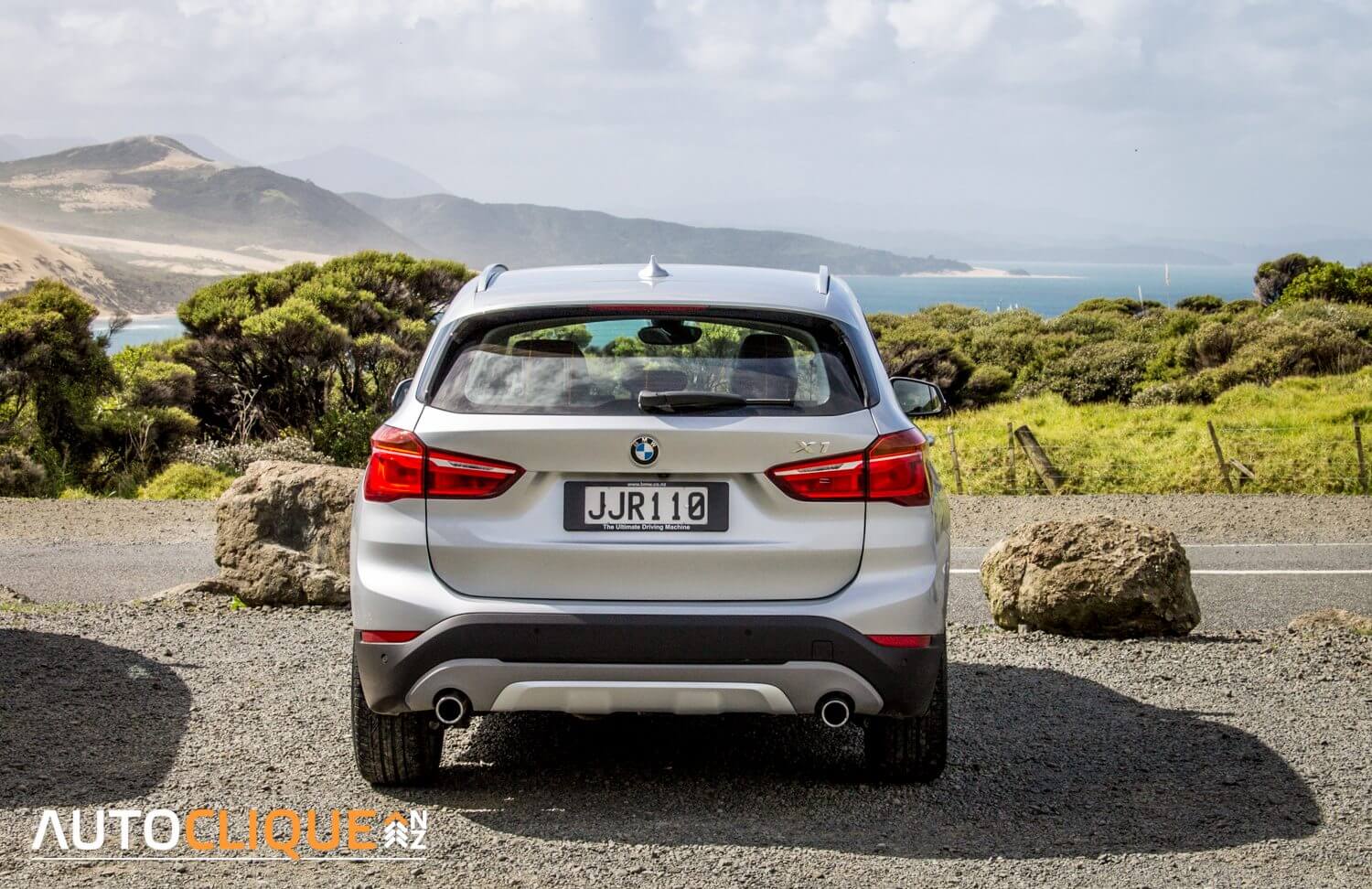 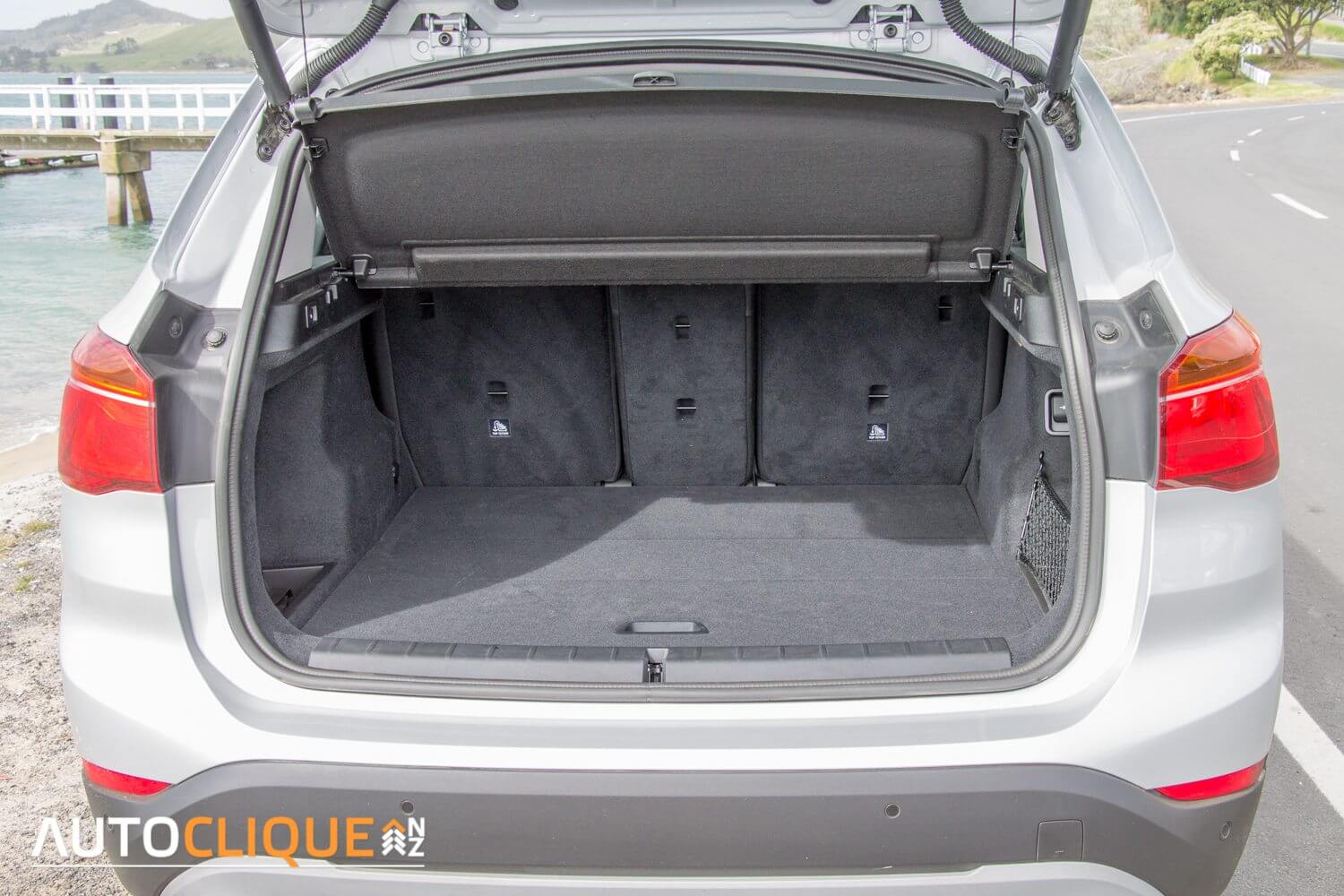 The X1 is a great family car. It’s big inside, good fun to drive, fast enough to have some fun and has impressive handling. The diesel engine is torquey, but light on fuel. It has the high SUV driving position and visibility is excellent. Safety systems are class leading. It’s really hard to find fault with this car. Added to that it has a five year warranty, three years’ servicing and five years’ roadside assist included and it’s looking pretty good. 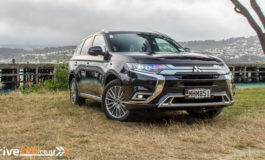 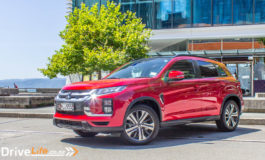