While everyone was recovering from their Saturday night hangovers, some of Tokyo’s petrolheads gathered at the Daikoku Parking Area on the first Sunday morning of the year. The New Year meet isn’t like most meets. There’s no theme, no start or finish time, and there’s no limit until on cars even if all the parking spaces have been taken.

If the Hanyu New Year meet was where supercars from Tokyo, Tochigi, Saitama, and Gunma Prefectures gathered, then the Daikoku New Year meet was where every car from the Kanto area gathered. They take this whole ’no theme’ thing seriously as the variety of cars is beyond belief. Want to see rare British classics, no problem. Modern supercars, sure. And of course there’s a healthy dosage of JDM cars too. We got to the party rather late, at 10am. By then all the spaces were full, with some having to resort to parking on bus and truck spaces and along the walls on the side. This was the most full I’ve seen Daikoku and the crazy thing was most of the cars there were the stuff of petrolhead’s dreams. I literally have no idea where to begin so I’ll start with my favourite car of the day; the Mercedes-Benz SLS AMG Black Series. Most of you might know the SLS is my favourite car. But curiously, there aren’t many Blacks in Tokyo. This silver one was the third I’ve seen but it’s the only one I’ve actually seen outside and move. The wait was worth it. It sounded even angrier than the already deranged sounding SLS, and the aggressive styling works on so many levels. Speaking of race-inspired looks, Tokyo’s first Aston Martin GT12 showed up. This guy must’ve only got his new car a couple weeks ago but has been spotted several times already. It’s great to see these sorts of owners properly enjoying their toys. But this guy really wants to break in his new car. He left Daikoku at around 11am but after a couple of hours he came back and brought some friends with him. It’s not like there was a lack of Ferraris at Daikoku. Pretty much all models (bar the ‘Hyper 5’) were present. Well, that’s not entirely true. While there wasn’t a 288 GTO, F40, Enzo, or LaFerrari, there were three F50s. Two red cars and the yellow/blue Anija F50. That was, erm, different to say the least. It had a custom front bumper, twin-exhausts instead of the standard quad, and a colour scheme that can’t be too good for its resale value. Other notable Ferraris include a 458 Speciale with a tricolore stripe, a baby blue Testarossa, and one of the loudest (visually and aurally) 360 Modenas in the world. Of course, at these sorts of meets Ferraris and Lamborghinis are to be expected. There was a good mix of museum-worthy examples and some that could only exist in Japan. Seeing these two kinds of supercars, the mint original kind and the ‘Japanised’ ones makes you appreciate the diversity Japan has to offer. In other countries adding a rainbow wrap and a big wing to an Italian exotic would be considered a crime against humanity, but in Japan it’s just another way to express their identity. Screw conformity, let’s make our cars look mental. That said, the mint condition cars still managed to pull a crowd. Take the Jaguar C-Type reconstruction. It’s not an actual C-Type, that’d be too expensive to drive on the road. But rater, a reconstruction made using some C-Type parts at around the same era too. Still, it’s estimated value is around the $8 million mark so it’s not your typical ‘replica’. Speaking of ridiculously expensive classics, there were a couple of 1973 911 Carrera RS at the meet too. These cars go for around US$1 million these days on the classic car market for reasons I cannot fathom. Sure, they’re awesome cars and I have huge respect and admiration for them. But are they really worth hypercar money? I’m not sure.

Don’t get me wrong, I love the 911 as much as the next person but some of the prices they’re going for on the market these days are just ridiculous. Surely this bubble will burst soon. It was pretty hard to make a case for the Carrera RS when right down the parking area were some ‘proper’ million dollar hypercars. Last year there was a McLaren P1 present at the New Year meet courtesy of the CarGuy group. This year they weren’t there so we had to make do with a Koenigsegg CCX and Bugatti Veyron. No biggie then. The Veyron I’m sure you’ll all be familiar with now. It’s by far the most used Veyron in Japan. The owner said he’s done about 20,000km in it now. Can’t imagine there being too many Veyrons in the world with that sort of mileage under its belt. Then there’s the Koenigsegg CCX. If your memory can stretch back to July last year you’ll recognise this as the Special Import Show show car. Only now it’s sporting some new wheels. The car is part the Anija A-Team group, hence the Anija-branded rims. Anija are the people responsible for creations such as ‘THAT’ blue Zonda and the yellow F50 from above. This CCX is (thankfully) one of their more tasteful creations. This one has also been sent to the guys at Scoot for some engine mods too. Of course it wouldn’t be a Japanese meet without some JDM goodies. There were many GTRs but the red Liberty Walk R35 was a particular standout. Another red car that caught my eye was a Mazda RX-7. But it was unlike any other RX-7 I had seen. It had a Tamon bodykit on it but what made it even more special was the rear wheel cover, which made it look like something out of The Jetsons. Some other crazy standouts include a BMW 1-Series with a wing straight from a GT racer, a carbon copy of a Subaru WRC Impreza, a crazy flatnose Porsche 911 by Body Shop DB, a Koenig Specials Mercedes 560SEL, and a road-going Mercedes 190E DTM car. Lots of crazy things. And these were just the tip of the iceberg. As I said earlier, the car park was full. It’d take too long to list them all and putting a photo of each one up would probably break the internet. But I didn’t even have time to get all the photos. We got there at 10am but within a few minutes an announcement was made saying the parking area would close at 10:30am. Which was just absurd. The reasoning, as far I understood, the policemen had enough of all the cars revving and taking up the precious bus and track spaces so the best course of action was to send 100+ cars out of the parking area and into the highway all at once. Yeah, Japanese logic. Luckily most of the cars came in groups/teams so they didn’t all leave at once. But that didn’t stop them coming back.

Each year, the Daikoku PA New Year meet attracts more and more foreigners. It’s a genuine thrill to see the variety of cars that come and if you hang around by the entrance ramp where all the cars going into the parking are have to go through, you’ll be able see them come in by the dozen. What’s even better is the timing. Because it happens in the first Sunday of January, it’s about a couple of weeks before the Tokyo Auto Salon. Which means you can plan a trip starting with Daikoku, travel around Japan for two weeks, then finish back in Tokyo for the Auto Salon. Which, coincidentally, I’ll be attending again this year. Stay tuned for that. 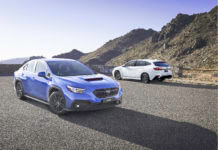