There’s a lot of contrast in Japan. Traditional shrines can be found next to the most modern of skyscrapers, the train schedules are always on time but inside the cars it’s chaotic. Going to KM Auto was one of these amazing contrasts. About a 90 minute train ride from central Tokyo, in a quiet and unassuming suburban area is one of Japan’s most exclusive collection of cars for sale.

Unlike other places I’ve been to which have been a mixture of private collections and a dealership, KM Auto are only in the business of selling cars. What’s even more amazing was the fact most of the cars they have in their showroom are Japan-new cars. That means the cars have spent all their lives living in the pristine conditions of Japanese roads and their history can be easily followed (for those who understand Japanese at least). I had heard of KM Auto from a friend before but it was only after seeing photos of their one-off MSO 12C online that made me want to go check them out. The 12C is kept in their larger showroom adjacent to their original showroom. The new showroom is about three years old.

Going inside was different from any other showroom I’ve ever been to. I had to take my shoes off and put on slippers, Japanese style. I was amazed at how clean the showroom was. The cars were packed together very tightly. Navigating my way around the cars I was worried I’d knock something off. I still get stunned whenever I see supercars together in a collection. Although I had gone there for the McLaren, by eyes kept diverting to the Ferraris. There were so many of them, including 2 F40s with LM kits. One was in original red but the other was in pearl white. It was a beautiful colour and photos just don’t do it justice. What goes with having a red and white F40 LM kit combo? How about a red and white 599 GTO combo? The red one was pretty standard with the black roof and black wheels. But the white one was mouthwateringly simple. No black wheels, no black roof… It was as pure as it gets. It was so refreshing to see an understated V12 Ferrari in Japan. I particularly liked the white details inside too. The 599s were the most modern Ferraris there. The 246GT Dino and 365 GTC/4, both white, represented two different approaches from similar eras. This was my first time seeing a 365 GTC/4 and I was not disappointed. I’ve always been a fan of front-engine V12 Ferraris and seeing this one in pristine condition was a real privilege. Elsewhere in the showroom was a genuine Nissan Skyline GT-R ‘Kenmeri’. Those that know what this or are die-hard JDM fans will know that this has every right of being in a showroom of this level as the European exotics around it. Speaking of which, the black Lamborghini Countach LP400S looked huge wedged between the white F40 and the Lynx E-Type. Ah, the Lynx E-Type. Lynx is a well-known Jaguar specialists who offer repair, maintenance, restoration, and reconstruction services for classic Jaguars. This E-Type lightweight is based on a Series 1 E-Type and comes with the early car’s 3.8-litre six-cylinder engine. So, the McLaren. This MSO 12C was ordered new by a VIP customer in Japan and has spent its whole life here. Everything you see on it was done by McLaren Special Operations at the factory, including the roof scoop and GT wing. Among the bespoke changes to this 12C include a 24 carat gold exhaust heat shield (McLaren F1 anyone?) and carbon fibre where carbon fibre wasn’t before. Quite literally everything that could be changed to carbon fibre has been changed. The rear diffuser, the exterior body panels, the rear airbrake, the steering wheel, the engine bay… Literally everything. I asked Masa, who was showing me around, how much this was worth and even he wasn’t sure. Inside the original showroom was a Porsche 911 Turbo S Cabriolet (997), Mercedes-Benz SLR McLaren 722 (sold new in Japan), a Ferrari Enzo and F40. The latter two were under covers but the guys at KM Auto were kind enough to take them off. The F40 was pretty much a new car with only 1400km on the clock. The Enzo even less with around 400km.

Speaking with the owner, he said he started KM Auto 25 years ago just as Japan’s bubble economy burst. Back then a F40 cost $2 million, after the bubble bust it dropped to about $250,000. He came in at the right time when prices were at their lowest. He started off with BMWs and Benzes then eventually started trading supercars such as the Ferraris and Lamborghinis you see here. Ferraris are his favourites though, as you can clearly see. He also owns some himself including a LaFerrari, 488 GTB, Daytona, and FXX. I didn’t realise it at the time but the white McLaren P1 at the Hanyu New Year meet was also his.

Most of the cars they sell are to Japanese people wanting supercars, not necessarily supercar collectors. However with prices of classic cars skyrocketing, most of the interest are now coming from overseas. We certainly don’t have this kind of showroom in New Zealand but wouldn’t it be great to see just one of these driving around on our roads? Due to the relatively low prices of cars in Japan (compared to what dealers in Europe and the USA are asking anyway), Japan is quickly becoming one of the go-to places for classic car buyers. Places like Bingo Sports are getting large publicity due to the size of their company but these smaller dealerships like KM Auto that are tucked away in the outskirts of Tokyo also deserve some recognition. Because not even Bingo have a one-off MSO McLaren with a gold heat shield and two 599 GTOs in stock.

**Update: Since I visited KM Auto they’ve recently added a green McLaren 675LT to their stocklist. 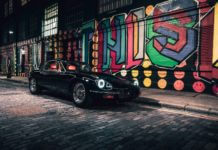