The ute, and the Hilux in particular, is a common sight on New Zealand roads. They are just about everywhere, old and new, mostly painted white and used as work trucks. But in recent years, as the trend towards SUVs and larger vehicles grows, more and more people are buying them as everyday vehicles or family cars. I was offered the latest generation Hilux for the Queen’s Birthday long weekend, and I jumped at the chance to test it out.

A few months ago, John was invited to the launch of the latest generation Hilux, but this was our first opportunity to road test one. You can read his thoughts here, along with information on the whole range. My test vehicle was the 4.0 V6 petrol 4×4 double cab in the top Limited spec – a vehicle that’s being bought more by suburban families than tradies.

I was happy to see that our test vehicle came in Olympia Red. It really suits the Hilux Limited, with its flared-out arches and raised ride height. The design in general is pleasing to the eye with some nicely curved details in the panels. Toyota have done well in making a traditionally boxy-looking vehicle look more interesting. The 18” wheels help with this, and fill out those huge arches pretty well. The top spec adds chrome detailing on mirrors, grille and rear bumper, fog lights, LED running lights, rear privacy glass and some differences to the tailgate and tie-down hooks. The Limited spec gives you full leather seats, leather steering wheel, power adjustable driver’s seat, satnav and climate control. As you’d expect in a vehicle designed for work use, the seats are really comfortable, and adjustable in every direction. The steering wheel adjusts for height and reach, I’m told the old Hilux didn’t have this feature.

There’s a big, clear rev counter and speedo with a central colour LCD display, which can be used to set-up and control various functions of the vehicle, or display information such as fuel economy, compass, audio tracks etc. Bluetooth pairing with my phone was quick and simple, done using the 7” central touch screen. The touch screen will be familiar if you’ve been in other Toyota cars. It’s a good system, easy to navigate with a clear display. Personally I’d like physical rather than touch buttons along the edges, they work perfectly well but I prefer more tactile controls. There are audio and phone controls on the steering wheel, as well as controls for the central display. The sound quality from the six speaker system is really good, with great bass, and no distortion when I turned it up really loud.

As well as Bluetooth connectivity there’s aux and USB inputs, and two power sockets in the central dash under the aircon controls. In the large central storage bin is a 220v, 110v power socket. 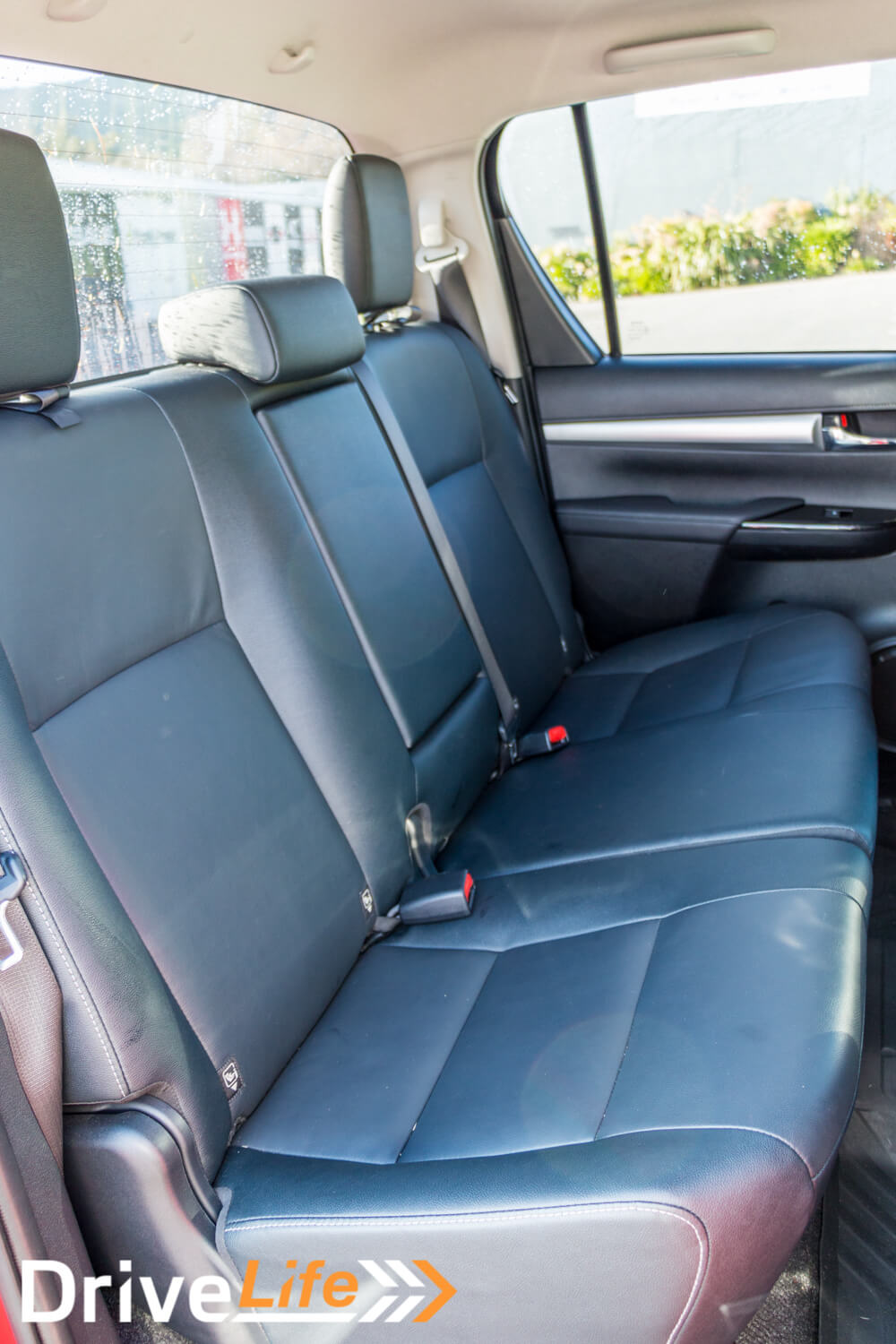 In the back there’s good legroom, you’d definitely seat four adults in comfort on a long trip. If you don’t have passengers, the rear seat lifts up and fastens back to the headrest with a strap and hook to give an extra place to store anything large that you’re carrying without having to put it on your leather seats. There are hidden storage bins under the seats too, one of which contains the jack and tools. There are also ISOFIX anchors and top tether anchors for child seats.

Each pillar has a big chunky handle to pull yourself up into the cab. These, combined with the side step, are pretty useful, especially for kids, as it’s quite a long way off the ground!
On the back of each seat there’s a flip-out hook, rated to 4kg. Great for hanging your takeaway bags on to stop them spilling on the way home.

The mirrors are electrically adjustable, though surprisingly they’re not heated, which would have been useful on cold, damp mornings. All windows are electric, and all four have one-touch opening and closing from the driver’s door. 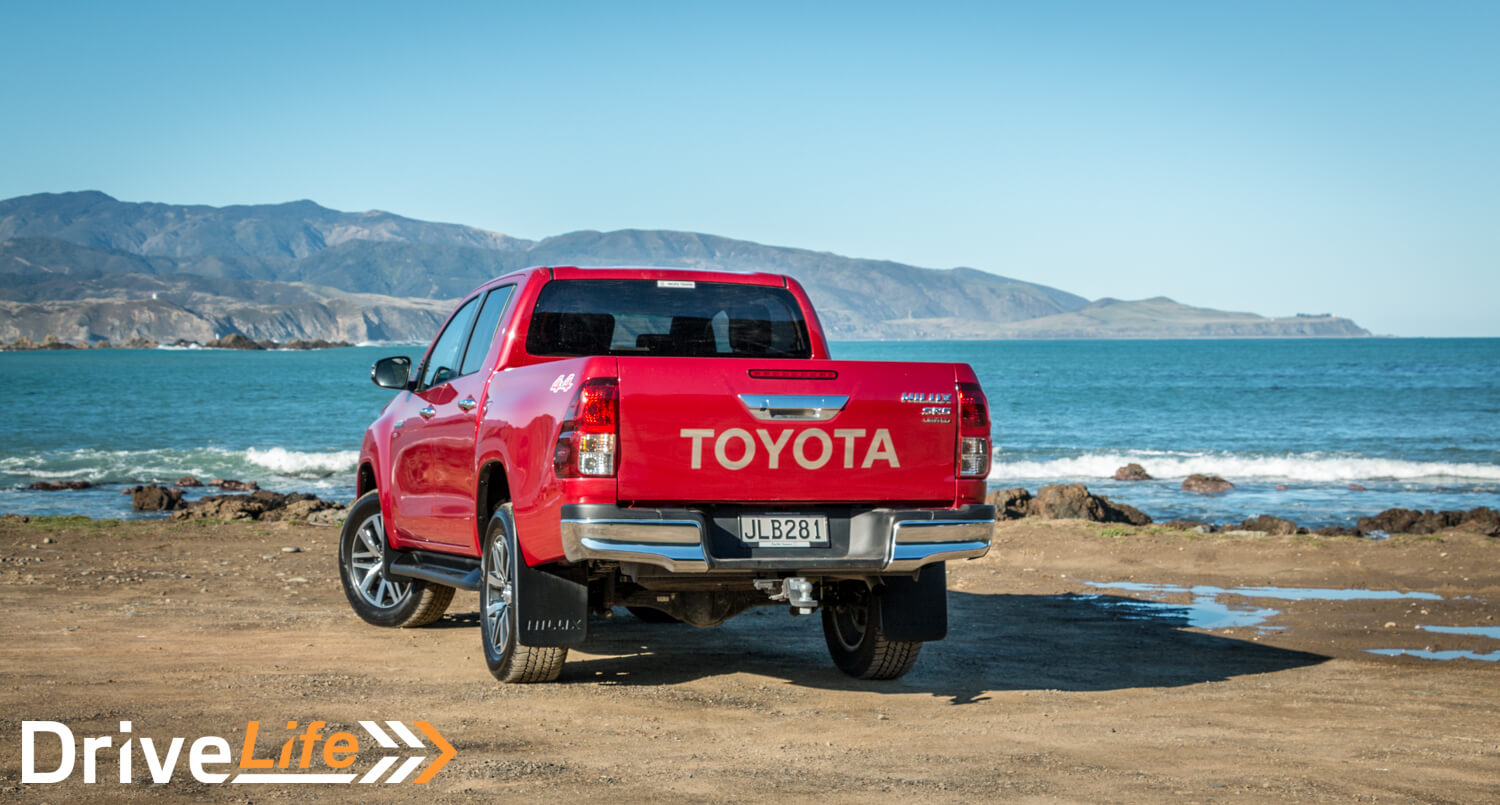 Push the engine start button (the Hilux has keyless entry and start) and that 175kW 4 litre V6 roars into life, rocking the whole truck slightly as it does. Cruising along the road in traffic it’s smooth and almost silent, but put your foot down and it makes itself known. Sometimes this is great – accelerating up motorway on-ramps is fun and when it revs, the V6 sounds really good. Other times, for example if you’re going up a hill, it’ll kick down and that growl sometimes makes you feel like you’re destroying the planet just to keep climbing. There are three driving modes – Eco, Normal and Power Mode. I kept it in eco most of the time, which softens the throttle and slows down acceleration a little. I found that it did seem to make jerkier gear changes when decelerating when in eco mode. Put it into power mode and it makes a noticeable difference, putting your foot down makes this two ton truck leap off the line with a speed which will surprise a few people.

It’s a big, lifted 4×4 so of course there’s some body roll , but it’s not excessive and you soon get used to the way it handles. Most of the time, the Hilux feels impressively smooth and refined, particularly on the motorway, but there were quite a few occasions where a bump, pothole or drain cover made the rear feel uncomfortably jiggly. This would likely go away with some weight in the back, as it’s bound to be front heavy when empty, but if you’ve bought this as a family vehicle, chances are the back will be empty a lot of the time. 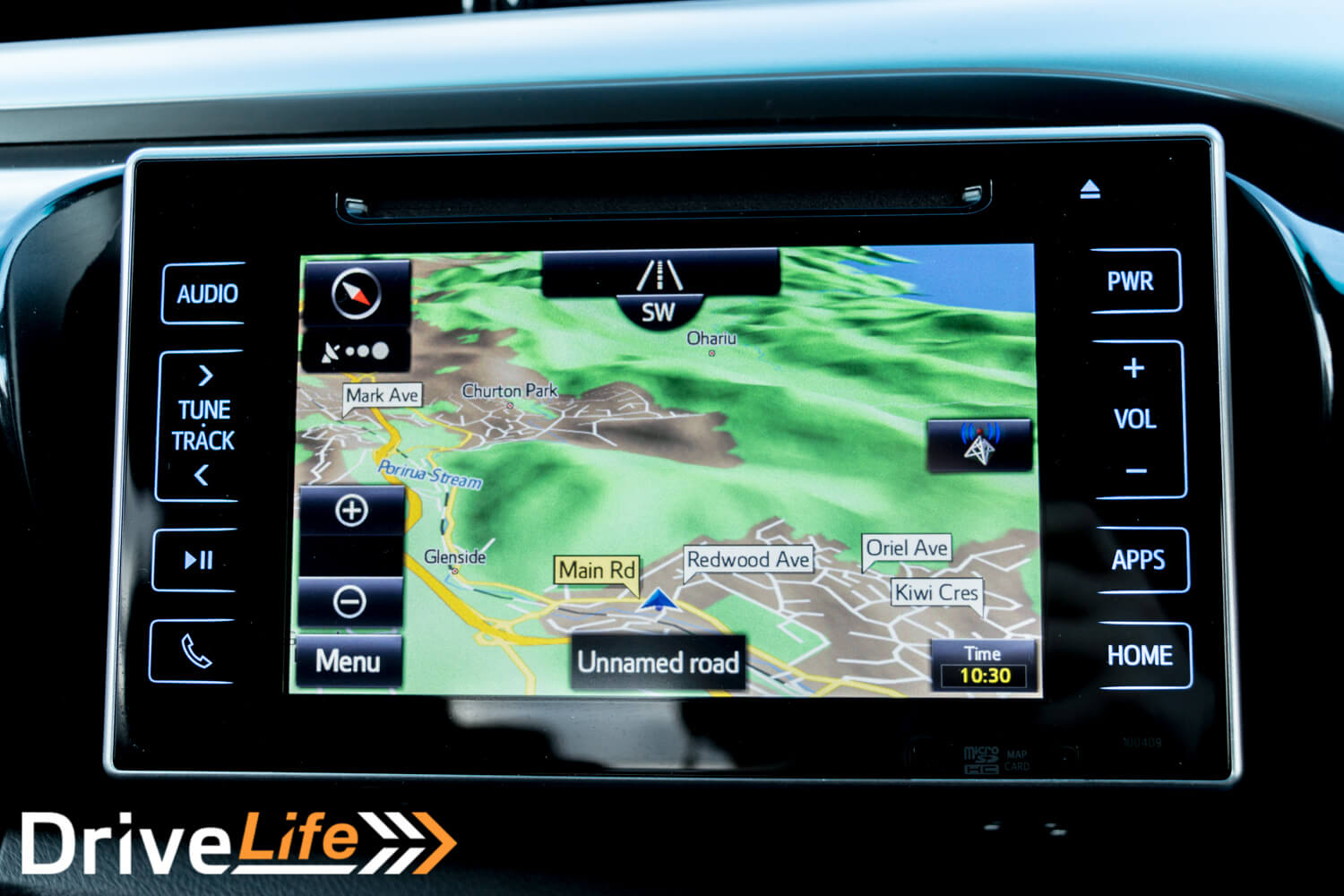 Visibility is great all-round, with the high driving position you can see right over a lot of other traffic, and those big side mirrors, combined with the reversing camera make maneuvering easy.

One thing I did notice was that the vertical rear screen reflected the central display and illuminated buttons at night, which was mildly irritating.

Because the Hilux is so high off the ground, it feels like you’re going slower than you are. 50kph feels like a snail’s pace. It’s a good thing there’s cruise control to keep your speed in check. A bugbear of mine surfaces here – it doesn’t show the cruise control’s set speed on the display, surely it’s not hard to make this happen?

As I had the truck for a long weekend, my family and I decided to put it through its paces with a few errands and family activities. First on the list was to take some hay bales down to the local community garden. When reversing up our steep drive I put a wheel on the grass, causing it to slip. Twisting the knob into low range mode sorted this out and the hilux cruised effortlessly up the slope. As I turned the truck around at our destination I noticed it has a pretty big turning circle. You have to plan manoeuvres a bit more carefully than in a car, but this soon becomes second nature. 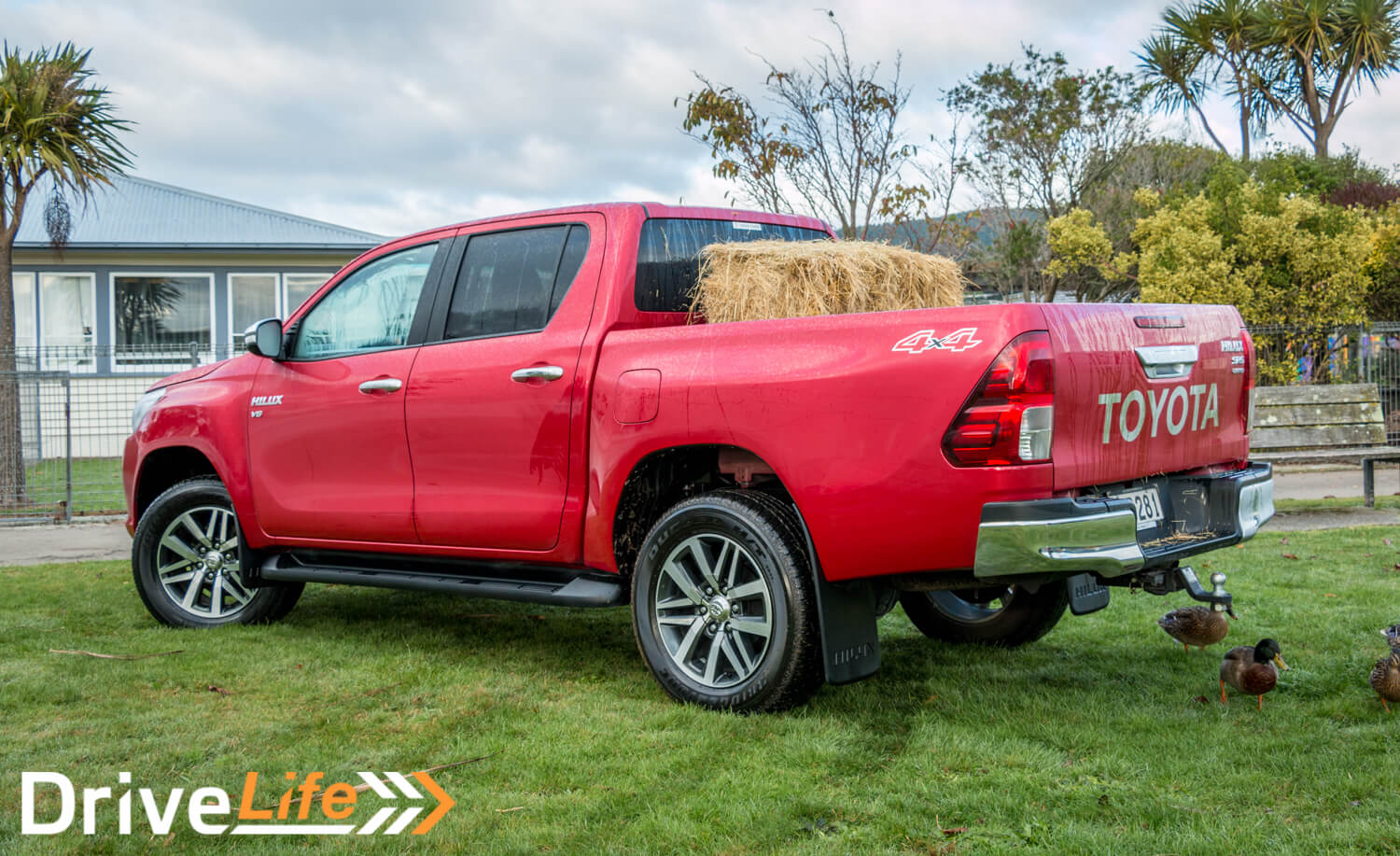 With that job done, the next errand was to pick up some firewood. It was great to be able to drive in, get three scoops of wood put in the back, pay, then drive home. No trailer to borrow and return, no delivery fees. And I was able to reverse easily right to the unloading spot. There’s no way our car could push a trailer of wood up our drive.

At the supermarket, the Hilux’s 5.3m length only just fits into a parking space but again this is something you get used to working around, and the reversing camera makes it easier to get in and out of spaces. Being able to just drop the shopping in the truck bed made things simple, though it wouldn’t be as convenient if it was raining.

The final errand of the day was to collect a couple of bags of river rocks for the community garden. This was a great excuse to drive right onto the river bed. We didn’t test anywhere near the Hilux’s 700mm maximum wading depth, but it handled the task effortlessly, driving along the loose rocks, and the muddy access road without breaking a sweat.

Next day was an early start on a cold morning, making us wonder why there aren’t heated seats in this top spec model. The final task for the weekend of family fun in the Hilux was a picnic at the seal colony at Wellington’s famous Red Rocks. There’s a 4×4-only track leading up to the seal colony which we decided to tackle in the Hilux. Having never driven off-road before I was a bit nervous. It’s about 3km of track, with various obstacles including deep gravel, mud, sand, water, pot holes, steep inclines and dips, and a couple of streams to cross. I needn’t have worried, the Hilux just ate up the track with ease, never even really needing any effort to negotiate the various hazards. And this is all on the standard Bridgestone Dueler road tyres. We stopped short of Devil’s Gate, the steep, bumpy, rocky saddle just before the seal colony. I watched another SR5 Hilux tackle it, but there are limits to what I’ll attempt in someone else’s vehicle!

Once we were back on the road, I realised we’d done the whole off-road experience in Eco mode.

Over the weekend we covered about 300km, and I really enjoyed the truck life. There are some compromises because of its size, and the leaf sprung rear suspension, but these are outweighed by its capabilities. Quoted combined fuel consumption is 12l/100km and I managed 14.7. If you’re happy to keep filling the 80l fuel tank with unleaded, the performance is impressive, though I imagine the diesel version is comparable with its 130kW and 450Nm of torque (420 on the manual version). And the diesel manages 7.6l/100km

None of the competition do a petrol ute, so all of the comparisons here are diesel. 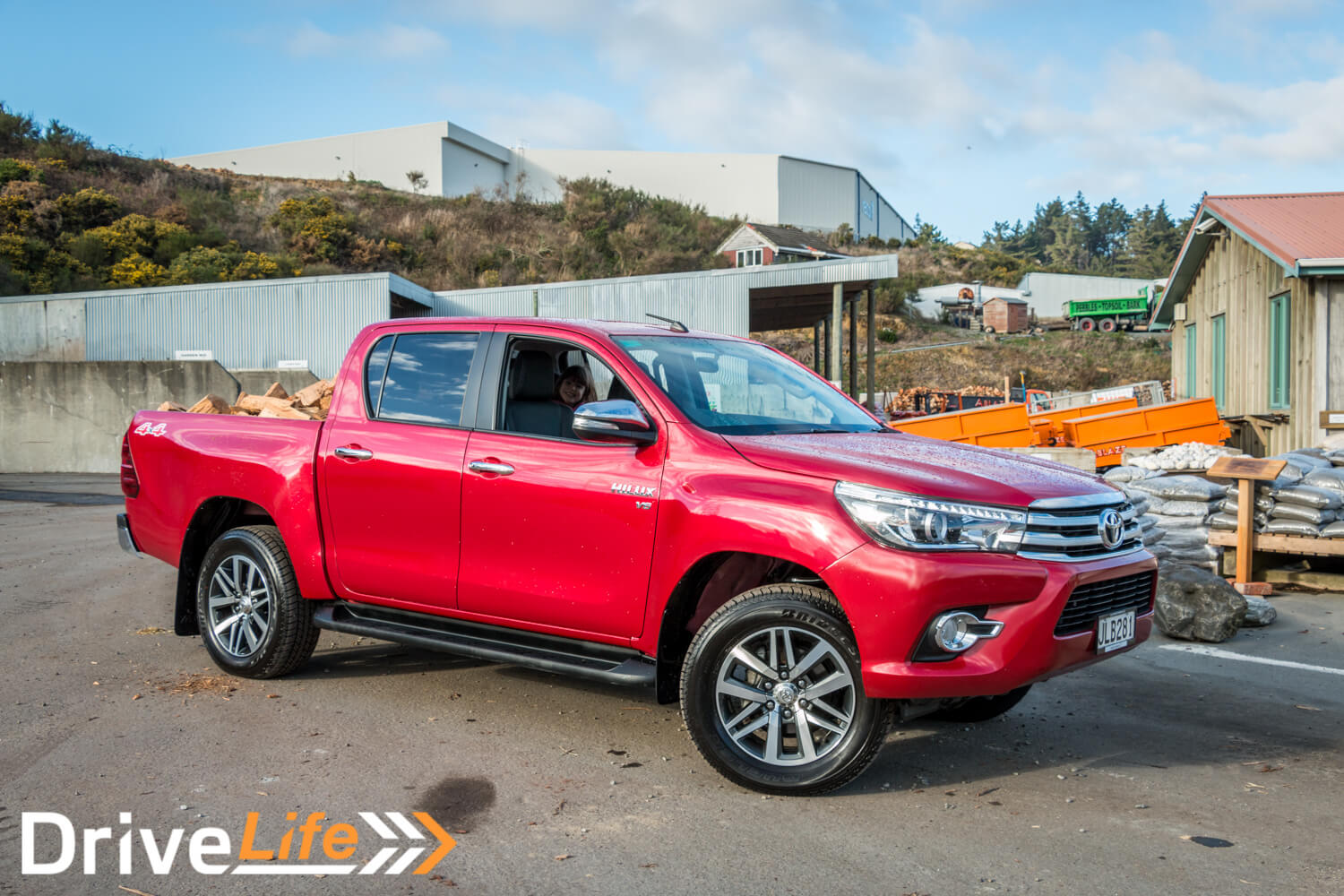 I think we tested the sort of things the average family might use a vehicle like this for. It’s immensely practical, spacious, comfortable, though not to the standards of a large SUV. It’s designed as a work vehicle and in that regard it excels. It can go just about anywhere, except maybe some tight inner-city car parks. If you want a large, safe, comfortable vehicle for the week, and a work/adventure vehicle for the weekends, the Hilux Limited is a great choice. 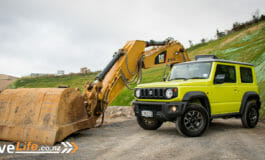 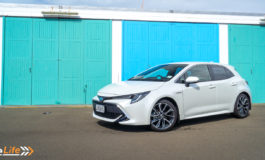