Here’s some useful consumer information. The AM-RB001. Aston Martin and Red Bull Racing’s collaboration will be a new F1-inspired hypercar for the road due in late 2018/early 2019. Only 150 road versions will be made with 25 track editions to follow later on.

If you do the maths thats 175 in total. Exclusivity is key for Aston Martin, the company caps their total sports car production to 7000 units per year. So far they’ve had over 600 serious potential customers interested in the car.

However, owners of the One-77, Vulcan, and Lagonda Taraf get first dibs. If you desperately want one, the only chance now is to buy a Lagonda asap as the One-77 and Vulcan are all sold out. But, and here’s the thing for all the NZ readers; there’s a good chance an AM-RB001 will be offered to a NZ customer. The AM-RB001 will be powered by a new, high-revving naturally aspirated V12 with specs to come “in due course”. Interestingly, most people assumed this would be a V12 hybrid hypercar in the same vein as the LaFerrari but no, it’s not.

Aston Martin held a special launch in Tokyo during the lead up to the Suzuka Grand Prix. Speaking with Dan Redpath, Senior Manager of Marking & PR for Aston Martin in the Asia Pacific Region, he confirmed it will be a midship N/A V12 with a target 1:1 power-to-weight ratio. When discussing the specifications of the car, they talk about it in grams. Not tons, not kilograms, but grams. That should give you an idea of the level of thought and engineering that’s going into this hypercar.

Unsurprisingly, given Red Bull Racing’s involvement, there’s a lot of F1 inspiration going into this car. Aerodynamics is the key word here with a lot of underfloor aeroydynmaics going on to give it “unprecedented downforce” and “high levels of lateral-G”, said Redpath. Surprise surprise, the AM-RB001 will be made from carbon-fibre. This project has been something Adrian Newey, Red Bull Racing’s Chief Technical Officer, wanted to for a long time. Not content with designing championship winning F1 cars, Newey dreamt of making a road-going hypercar for sometime. Then the stars aligned when the current CEO of Aston Martin, Andy Palmer, and Simon Sproule, Director of Global Marketing Communications, moved from Nissan to Aston.

Palmer and Sproule were instrumental in the relationship between Red Bull and Infiniti. When the two moved to Aston Martin, all the pieces were in the right place. The AM-RB001 is actually referred to internally as ’Nebula’.

Marek Reichman, head designer at Aston and Chief Creative Officer, is working closely with Adrian Newey on the design, said Dan Redpath. Newey is taking the lead with aerodynamics while Reichman is in charge of making look as beautiful as an Aston Martin should. Aerodynamics pops up again as being instrumental in the shape of this car. But it’s not a case of form following function, or vice versa. The two are working together in-sync. It’s a matter of form and function flowing.

In photos the car looks jaw-dropping. In person it’s absolutely breathtaking. It’s such an extreme and unique shape. The F1 inspiration is unashamedly obvious from the seamless incorporation of the traditional Aston Martin shape nose that also somehow resembles a F1 car’s nose. The massive splitter, the wheel arches, and especially the way the underbody tapers towards the front.

The two occupants inside sit like a F1 driver too, with their bums lower down than their feet. That means even tall people can fit in comfortably. Getting in and out shouldn’t be a problem with doors that appear to open upwards. The brief of the car was to be a usable road car. One that wouldn’t be intimidating to drive and could be used for a trip down to the pub for Sunday lunch. Here’s the best part though; it’ll be made in both left and right hand drive. It’ll be hand built, of course, in purpose-built facilities at Aston Martin’s Special Projects division. 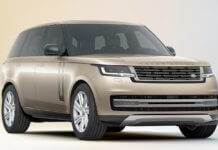