The main prizes in the WorldSSP championship were awarded at the penultimate round in Jerez when Kenan Sofuoglu (Kawasaki Puccetti Racing) secured the Riders’ Championship and Kawasaki took the Manufacturers’ trophy. In the ESS category, which races within the WorldSSP rounds in Europe, Axel Bassani (San Carlo Team Italia Kawasaki) became the inaugural champion after scoring a fifth place in the combined results today.

This was the fifth Supersport World Championship win for all-time class great Sofuoglu, three of which have been achieved on Kawasaki Ninja ZX-6R machinery. He has now scored 38 career wins, as part of 77 podiums in all.

Kenan had wanted to win the championship at the previous round in France by winning the race. He fell from the lead in that contest but got his wish of securing the championship via his race win today, from Niki Tuuli and Kyle Smith who were second and third on the podium respectively.

Kawasaki also made sure of the Manufacturers’ Championship after Sofuoglu took his sixth win of the season, the Japanese producer ending the day with an unassailable 48-point lead with one round remaining.

Despite crashing while leading on lap five, as he attempted to get away from the chasing Tuuli and Sofuoglu, Randy Krummenacher (Kawasaki Puccetti Racing) got going again to try and fight all the way to the end.

Randy was forced to retire shortly afterwards but he is still second in the championship, three points ahead of the next closest rider.

Bassani’s race today saw him lead the chasing pack, some way behind the top four, when it mattered, scoring 11 points and eventually ending his year with a 16 point advantage over his nearest competitor. The first four riders home in the ESS championship all rode Kawasaki Ninja ZX-6R machines.

The last round of the regular championship will take place in Losail, Qatar, on Sunday 30 October.

Kenan Sofuoglu, stated: “I am so proud to have won my fifth championship and I have to say a special thanks to Kawasaki. Some years ago they gave me a good package and good support and since that time I have enjoyed racing a lot more. Then I found the Puccetti Racing team two years ago and this is my second title with them in succession. To do that is incredible and we have won many races. At the beginning of this year I did not know what would happen but we won the championship one race early. Racing is not difficult but fighting for championships is difficult. Today, when I saw that Randy had crashed I thought that because I was already champion, I could go on to try and win the race. It was my dream to do that at Magny Cours but I achieved it here. Luck was with me today and together with our good potential and good performance, we won the title again.” 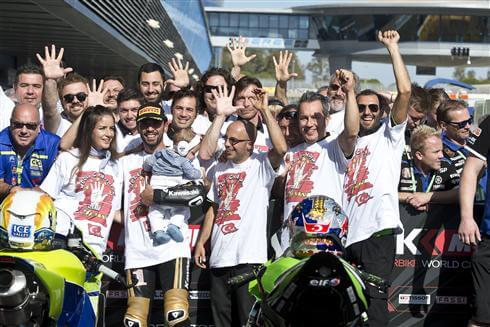 Randy Krummenacher, stated: “I felt very strong in the race and felt a step stronger than those around me. When I got in front I thought if I pushed a little bit more, not too much, then things would be easier today. I was excited, maybe a bit too much, because I lost the front very quick and it was a bit of a surprise. I want to look forward and do well in Qatar. The bike feels good and I cannot wait until the final round. I want to say thanks to Kawasaki and well done for the Manufacturers’ Championship. Congratulations today to Kenan. He did a great job and he really deserves to be champion.”

Steve Guttridge, Kawasaki Europe Racing Manager, stated: “Kenan winning yet another Supersport title for Kawasaki within the fantastic Kawasaki Puccetti Racing team is a dream come true. He’s had some very tough times but always he is a true professional, with unrivalled determination to achieve the goal. So a big congratulations from Kawasaki goes to both Kenan and his team again this season.”

Shigemi Tanaka, Kawasaki Europe: “It is very important and valuable for us at KHI that Kawasaki accomplished the same feat as last season, taking Manufacturer titles in both WorldSBK and WorldSSP championships and highlighting the excellence of Kawasaki Heavy Industries products because WorldSBK and WorldSSP bikes are both based on production bikes.”

Axel Bassani, stated: “It was great to win this championship because it was not easy at the start and I had to fight to become better and better. At the end of the season, at Magny Cours and here, I got close to the top and the regular riders and I am happy about that. I destroyed a bike in a crash yesterday and the team had to rebuild a bike for me, so I am happy to take this result and the championship win. Many thanks to all involved.”