What happens when 70-plus Ferraris depart Kyoto to go to their first stop at Awaji Island, 120km south of the historic city? Chaos and madness ensues. To Ferrari’s credit, they did employ people to guide cars to the correct route. They even had signs and arrows up to make it easy to navigate through the small roads in Kyoto. But that didn’t stop some people diverting to other roads and routes. That meant half the cars went the right way, the other half basically winging the route. But they somehow managed to get to the destination at the end, albeit quite late. The cars left in batches of threes, the LaFerraris leading the way followed by the rest of the Cavalcade. We left around with the middle of the pack figuring we’d catch up with cars in front of us and the ones behind us would also pass us.

None of that happened until we left the city and got on the highway. Even then the cars behind us only caught up when we had a short stop at a motorway service area after a long 100+ kilometre drive south. Perhaps not the most exciting drive for most of the Ferrari owners as it was limited to motorway driving. However, there were some long and interesting tunnels along the way as well as some epic scenery. Particularly on the last stretch, going over the bridge connecting the mainland to Awaji Island. I literally had never heard of Awaji Island or know anything about Awaji Island before visiting it with the Cavalcade. 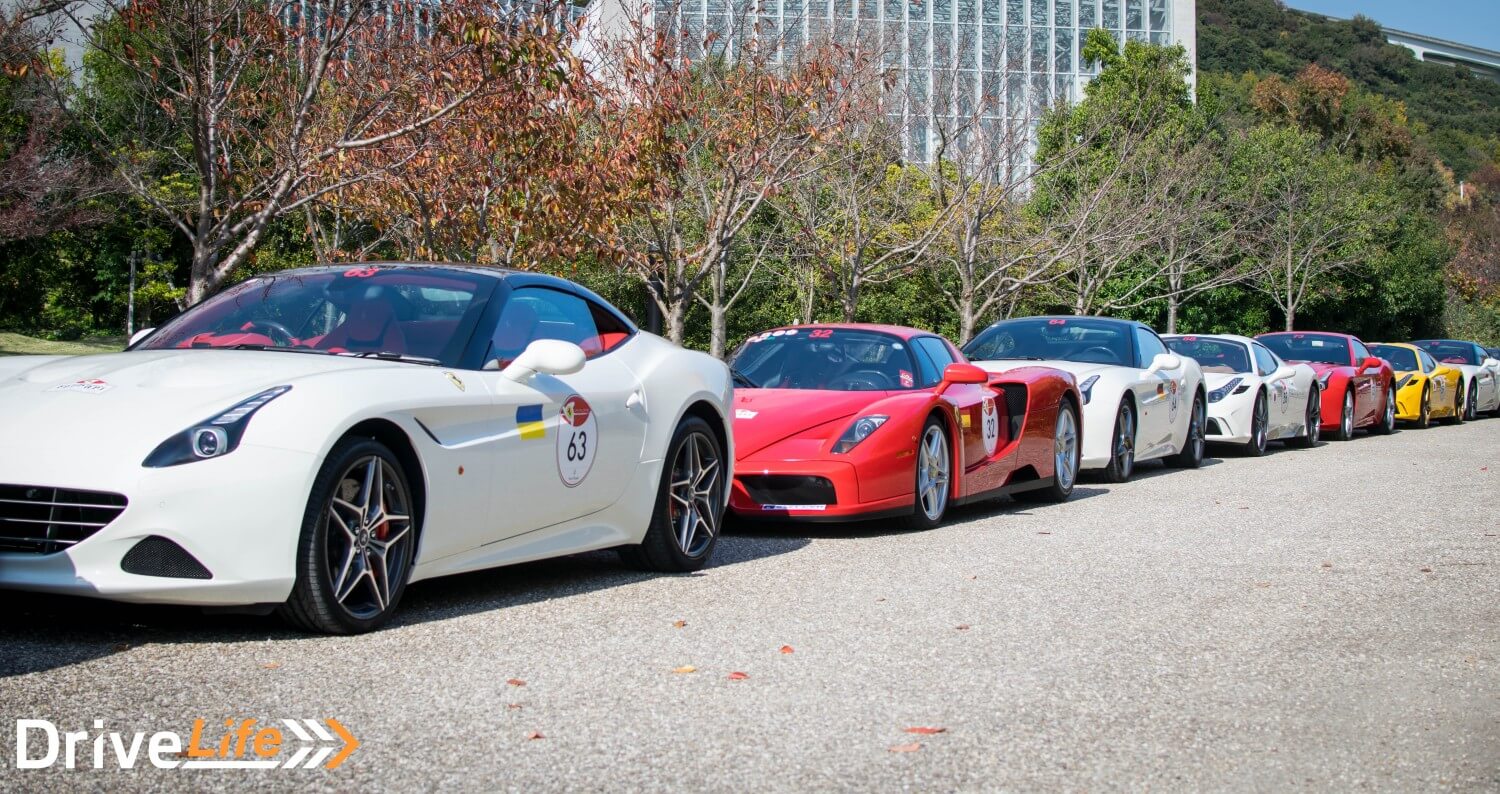 Before the cars stopped at The Westin Awaji Island Resort for their lunch break, they went on a little time attack course down the road. It was a strange and unusual pit stop but very cool nonetheless. We made it in time to see some California Ts, FFs, 458s, and a F40 go around the little circuit before going to lunch.

The car park of the Westin was literally full of Ferraris. Having 70 of them stretch from the main building to the car park out front by the entrance was a sight to behold. Shades of red, white, silver, black, yellow, and blue covered the Westin’s front.

As the owners left their cars out in the warm autumn sun for lunch, it gave us time to spend some quality time with the cars without interruption and without bothering the owners. Well, that was until some of the staff from the resort came out to have a look at the cars themselves.

Again, this was just part of the enthusiasm for these cars I was talking about in Part 1. I’m sure not all of them were interested in cars in the slightest, but that didn’t matter. Because if there are this many Ferraris lined up you’re going to want to check them out. Ferraris are just one of those things that everyone knows of. The name is synonymous with high performance, exclusivity, and objects of desire. You don’t have to be a ‘petrolhead’ to appreciate these cars. So it was made even better when some staff brought out their bunny mascot and started taking photos of it sat next to various Ferraris. That was undoubtedly one of the highlights of the Cavalcade for me. But there were so many others. For example, seeing the red LaFerrari with gold wheels and the red Ferrari Enzo. Sure these cars may not sound particularly outstanding but they were registered in Spain. I doubt I would’ve seen these cars out and about if it weren’t for this event. The same can be said about the one-off SP1. The first of the Special Project Ferraris made for a Japanese collector. Based on a F430, the SP1 is totally unique and striking. It might not be to everyone’s taste but the fact that it exists should be celebrated. This led the way for these special one-off orders for individual Ferraris from bold clients. That’s exactly what the world needs more of. While the majority of the cars were the ‘usual’ Ferrari stable such as the 488 GTB, 488 Spider, F12 Berlinetta, and California T (there weren’t many FF or GTC4Lusso), the Cavalcade did also bring out some of the rarer models such as the 599 SA Aperta and F12tdf. The black 599 SA Aperta is a Tokyo local and one I’ve only seen a couple times before so it was nice to finally get a chance to see it up close and personal. The two F12tdfs that joined the Cavalcade were also both new F12tdfs I hadn’t seen before. One was a black car which I seem to miss every time it gets taken out on the streets in Tokyo, and the other was a deep yellow which looked darker than the Giallo Tristato colour seen in most tdfs. It was more of a mustard colour than usual, thought that could’ve been because of the autumn lighting. The two F40s, one having been upgraded with custom parts, the other being in full original condition was a great example of the various tastes of Ferrari owners here. Some might not agree with the customised F40 but with so many stock ones, it’s nice to see someone daring to be different. The same could be said about the bold spec of a particular 458 Speciale too in full Scuderia Ferrari-inspired livery. But let’s not kid ourselves; the six LaFerraris was the icing on the Ferrari cake. It was a shame Ferrari didn’t bring in the LaFerrari Aperta as that would’ve been an appropriate special guest for such a special occasion, but then again this event was for the owners and we wouldn’t want them or their cars feeling over shadowed. I was confused as to why the gorgeous dark blue LaF had cream stripes on it though. Good thing they’re only temporary. It was also great to finally see the yellow LaFerrari owned by the famed Matsuda-san, you know from the amazing Matsuda collection. The cars left Awaji Island to go to their next location before returning back to Kyoto. They left in the same way they arrived; in groups of two and three. Seeing and hearing them accelerate out of the Westin and drive on the seaside road was a great way to end my time with the Cavalcade.

It was a great experience and privilege to be part of the first Ferrari Cavalcade in Japan and Asia. I would have liked to have spent more time with the cars, with the people, and of course with the scenery, but like everything else that happened this week, I had to leave early for yet another adventure. Stay tuned to find out what it was.