The Suzuka Sound of Engine, sorry the Richard Mille Suzuka Sound of Engine to give it its proper name, is an annual event held at, you guessed it, Suzuka Circuit. This was the second year it’s been held and the first time I’ve been but I can already say I’ll be going again next year and if you’re reading this thinking about going then you should. I went to this event not expecting much and not knowing much either. Last year’s inaugural event wasn’t very big nor was it hugely publicised. I suppose this year’s wasn’t publicised a lot though word did get around quite quickly. Especially considering some of the highlights from last year’s event. 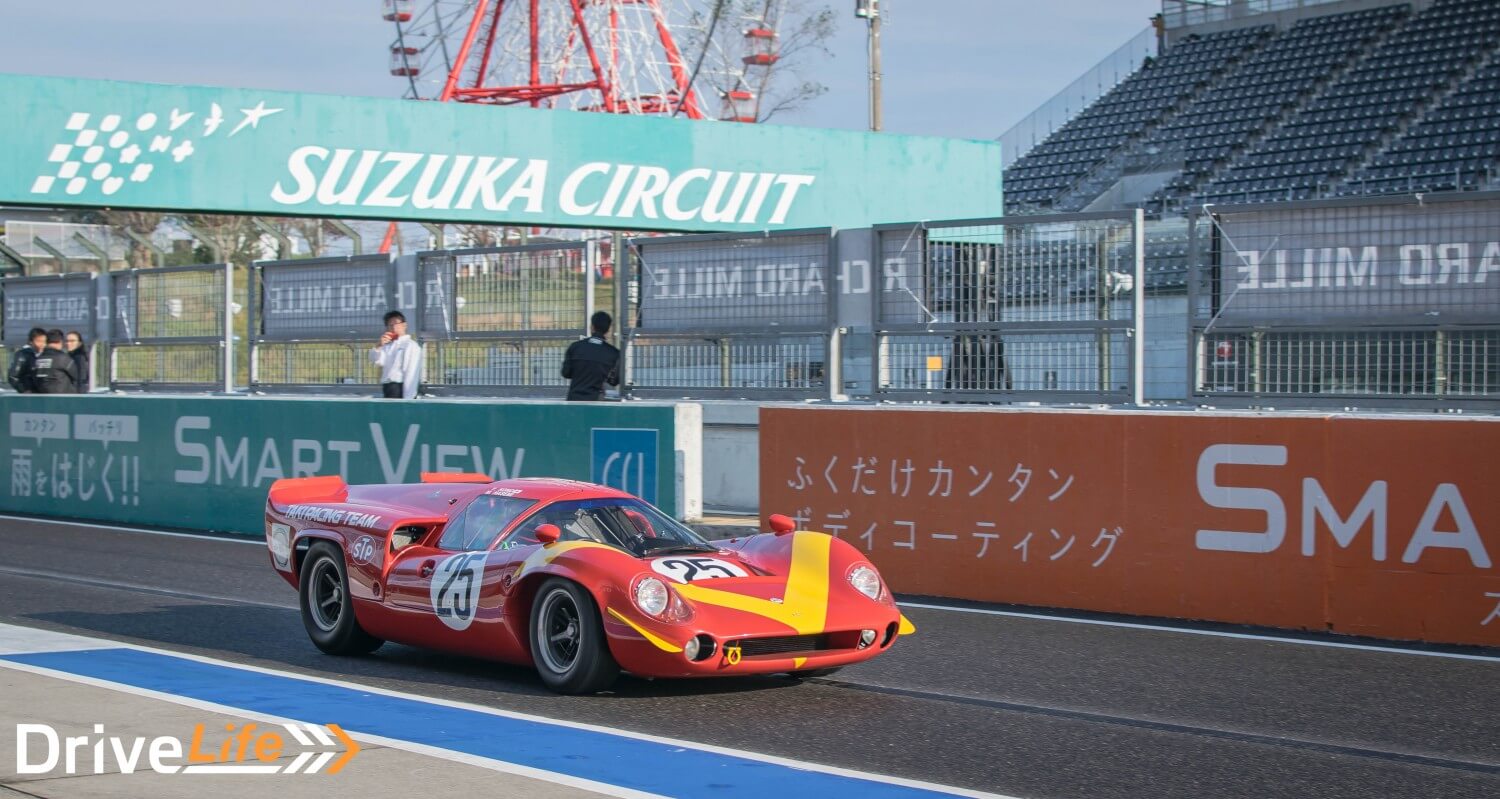 The idea for the Sound of Engine event started in 2012 when Suzuka Circuit celebrated their 50th Anniversary. Being host to a rich history of motorsport events such as no less than 30 Formula 1 races and the 8 hour Suzuka Endurance race.

With this in mind the people behind Suzuka Circuit, Mobilityland Corporation, wanted to spread the love and appreciation of the motorsports of yesteryear with fans today. They wanted to make an event where people could enjoy engine sounds from a bygone era. 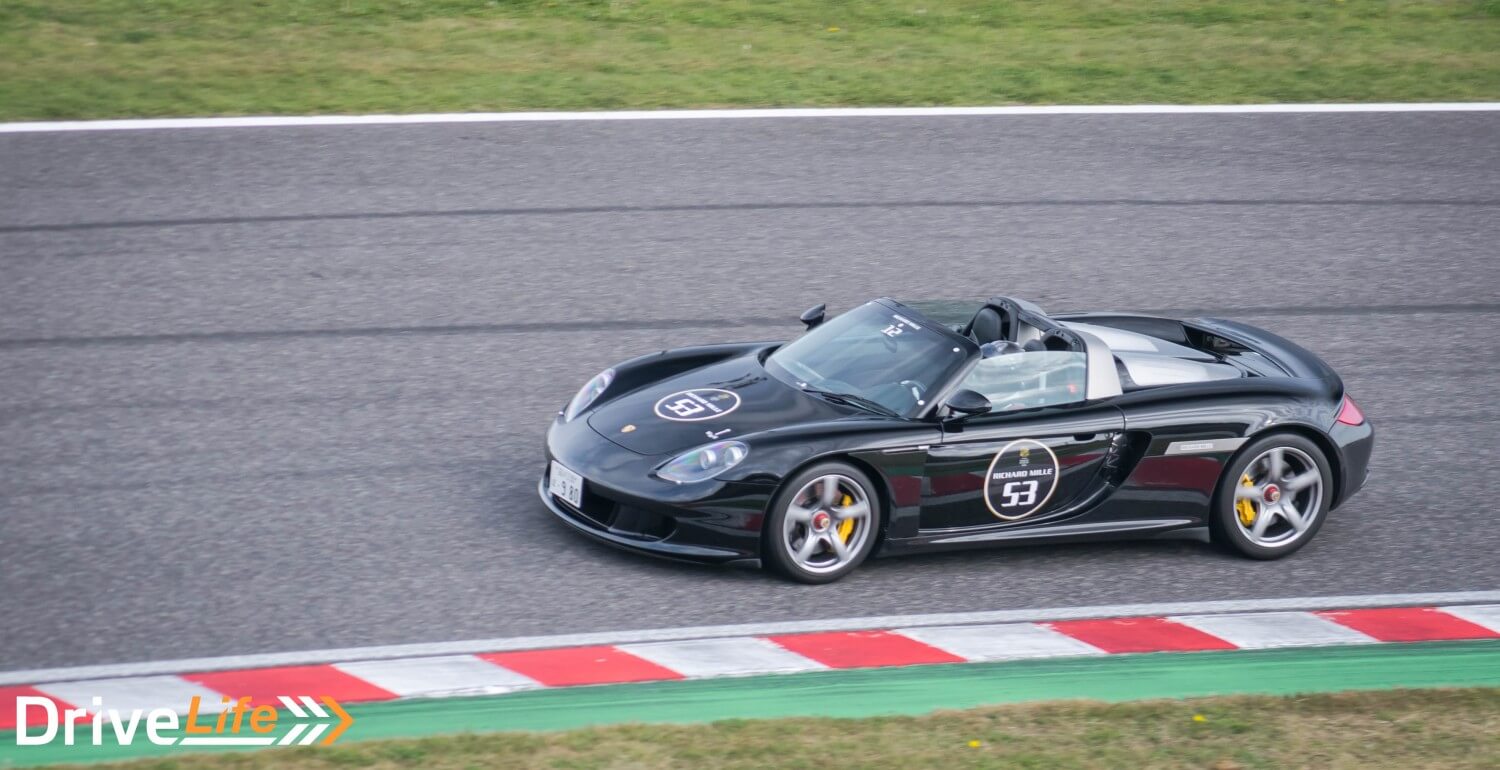 This year they also incorporated more to the Sound of Engine than just old racing cars driving around. There was a special exhibition for owners of cars and motorbikes from before 1976, there were bikes celebrating the Isle of Man TT race, and of course this year’s main theme was Group C cars from the 80s and 90s.

After a week and a half of chasing McLarens, Paganis, and Ferraris around most of Japan, it was nice to take a break from all that and get comfortable with one location. This was my first time at the Suzuka Circuit and what a way to make a first impression.

First of all it’s a lot bigger than Fuji Speedway. Not just in terms of track size but the whole complex is bigger. There are more parking areas, which are a lot bigger. Walking around takes longer too. The pit garages were about the same though. But part 2 will focus more on the garages and car parks so stay tuned for that.

The Sound of Engine takes place over a weekend, last year it was during the summer this year it was held in November. I’m glad it was in November because I probably would’ve died running around the place in the summer. It is recommended to come on both days to get a better feel of the circuit and event.

We got to Suzuka late Saturday afternoon so we just had enough time to look around and know what to expect for a full day on Sunday. Already we had seen and heard historic Formula 1 and Formula 3 cars go around. Out in the pits we had a peak at some of the Group C cars and supercars that would also be heading out on Sunday. That was enough to get our excitement levels through the roof.

The schedule for the event was hectic. There were only 5 or 15 minute breaks between events, meaning there’s never a dull moment. The thing that made this event even more special and incredible was there was something to cater to everyone’s tastes. 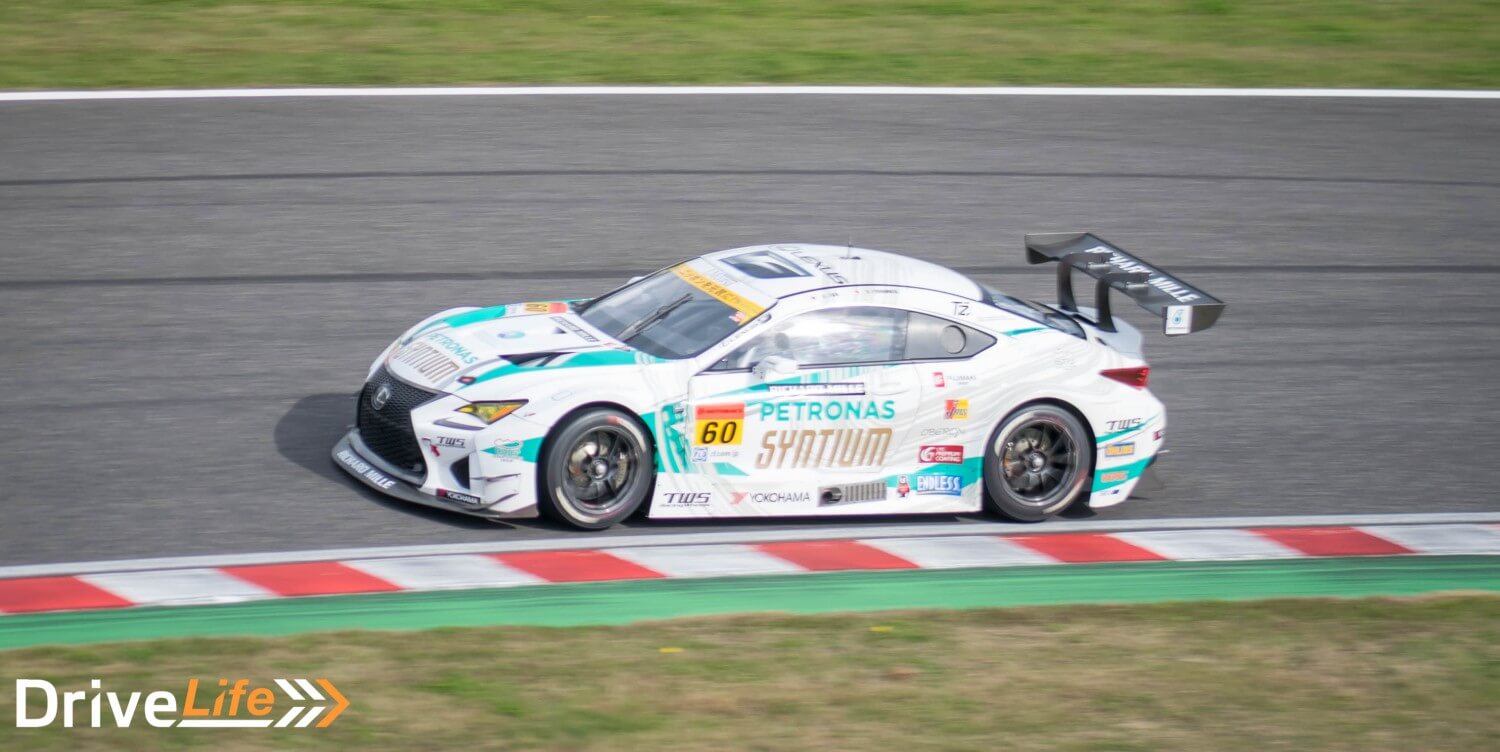 Like Formula 1? Perfect, the cars present ranged from all eras since the 1970s. Like motorbikes? There were hundreds of them (okay that was an exaggeration but it sounded like hundreds as they went around the track). Like Group C Le Mans cars? This is the place to go see them up close at the pits then have your ears obliterated as they go around the track.

If road cars are you thing then you’ll also be pleased to know there’s everything from the latest supercars to concours condition classics. There were even custom supercars such as Liberty Walk and Mansory Lamborghinis to a Ferrari Speciale with yellow headlights. By the time we arrived at Suzuka on Sunday morning things had already kicked off on time in true Japanese fashion. That meant the first lot we saw go around was the ‘Open Class’ segment. Basically it was a free for all for anyone wanting to get early practice runs around the circuit in the morning. The guy in the Jaguar XJ220 was very keen to get out there first. When that was done the Legend of Formula 1 cars went out. There are many ways to start a Sunday morning. You could go out and play a round of golf. You could go to Sunday mass. Hell, you could even finally fix that broken lawnmower you’ve been putting off doing. But seeing and hearing Formula 1 cars from the last 40 years go around Suzuka was definitely one of the best starts to any Sunday morning. Now I’ll admit, most of these cars were from a time long before I was born. However, that didn’t stop me from appreciating how epic they were. While I haven’t heard the new turbocharged V6 F1 cars in person yet, I don’t think I’ll be able to now after hearing V12 and V10 powered F1 cars. 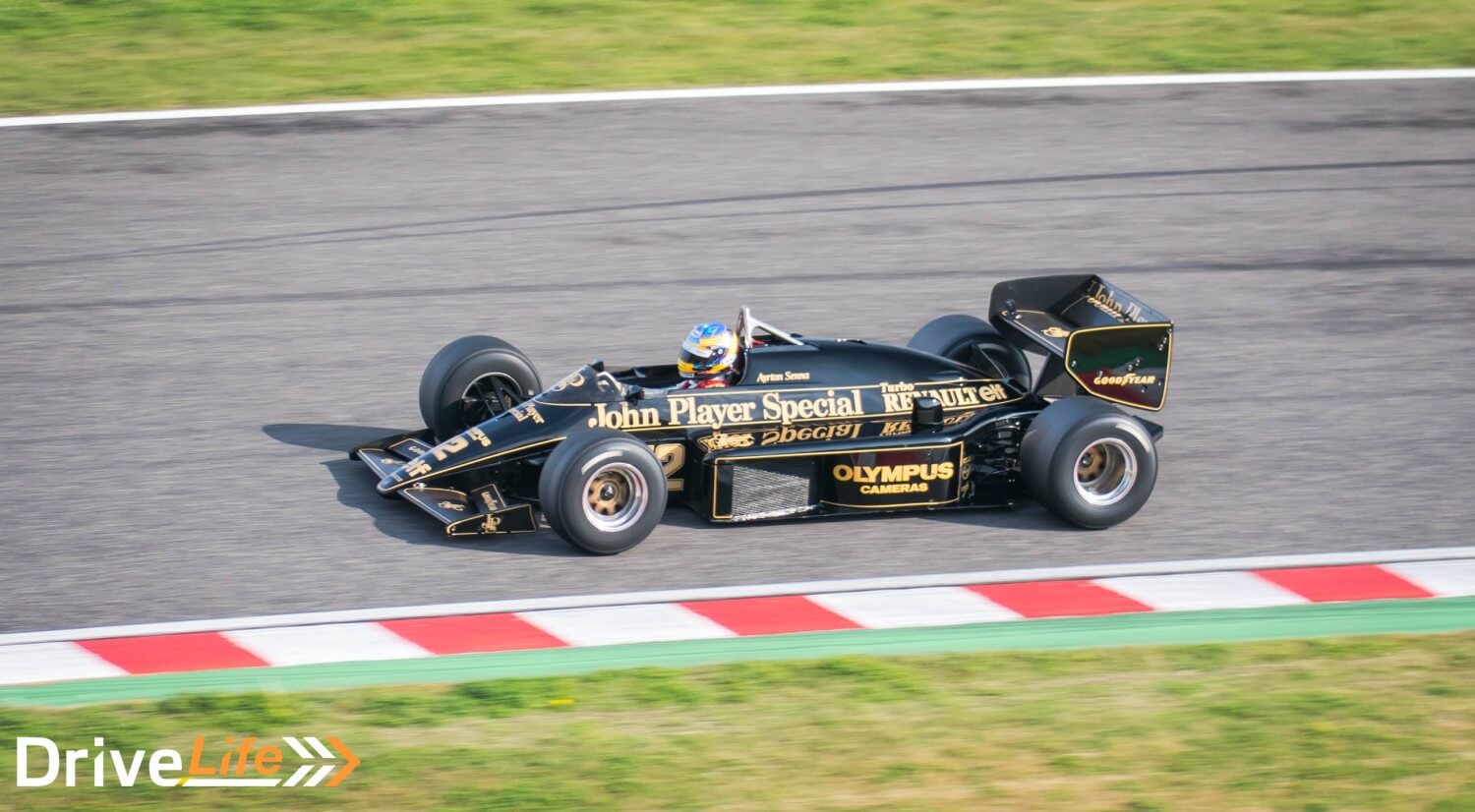 Certain cars stood more than others, in particular the Lotus 97T in full black and gold John Player Special livery. It was the number 12 car with a certain Ayrton Senna’s name on it. Whoever was driving it was channeling some of Senna as he was pushing it quite hard compared to the other drivers, even in their practice runs.

It was definitely very special to see an Alfa Romeo F1 car as well. The 179C with Marlboro livery was as cool as it was loud. Though it never won any actual races, it was a nice reminder that Alfa Romeo did once have a strong presence in motorsports and Formula 1. Oh, and did I mention it was very loud?

Speaking of which, talking about Formula 1 cars and not mentioning Ferrari is a big no-no. The Ferrari 312T which was driven by Clay Regazzoni was the first of five Ferrari F1 cars to go around. It was easy to see it coming with it’s very era-appropriate design but the noise remains one of my favorite.

That was, until the F2003-GA came out of nowhere near the end. I don’t follow Formula 1 religiously but I do appreciate it and try to stay up to date with it as much as I can. When I was a lot younger, and this will probably show my age a bit, Formula 1 was synonymous with Ferrari, Schumacher, and that distinctive howl of their V10 engines. The F2003-GA at the Sound of Engine probably wasn’t Schumacher’s, most likely Barrichello’s, but it was still a Ferrari from this era and it still made that amazing howl on the main straight. That experience alone made this whole event very special. 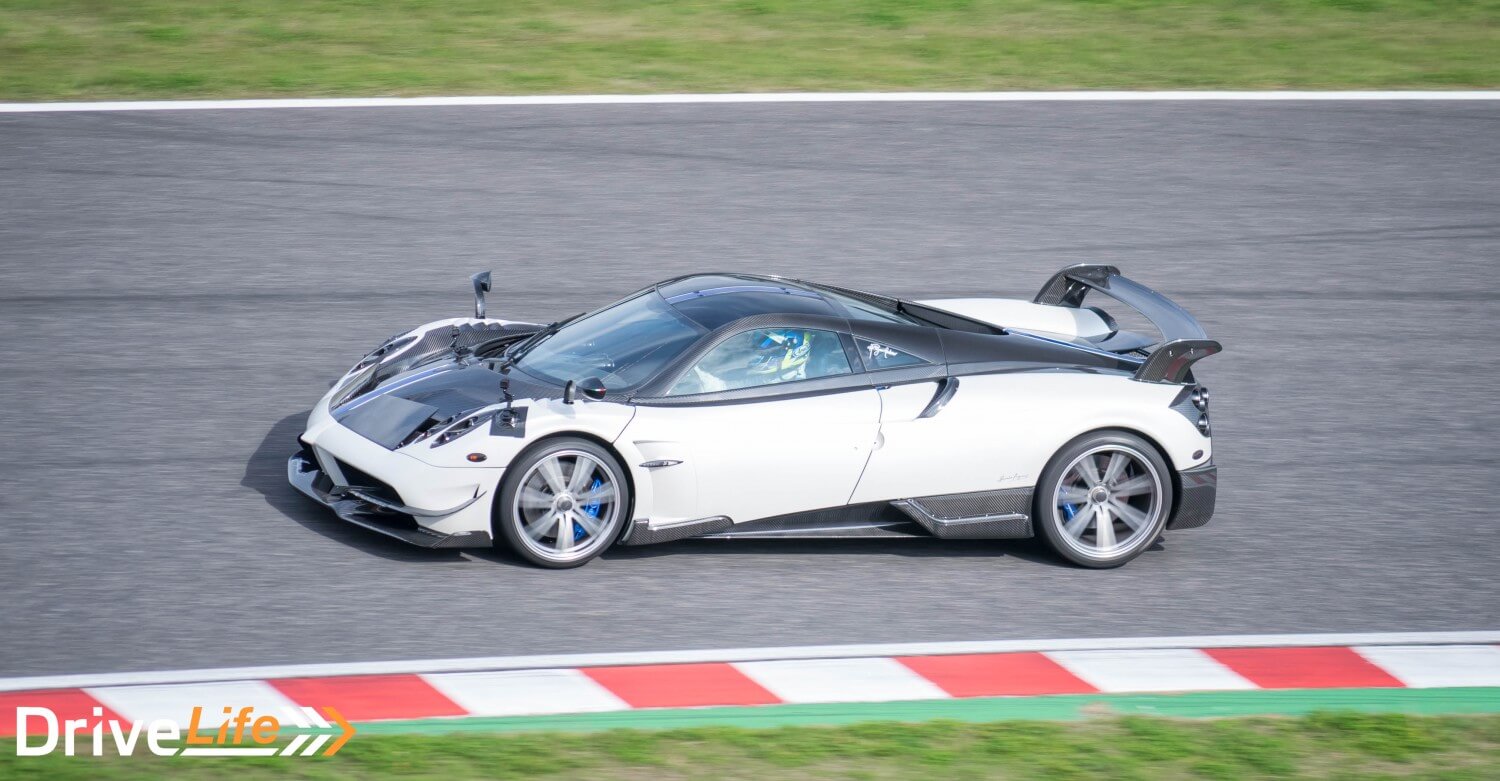 After a short break, well by break I mean some old motorbikes went around for an hour so I went and had a look at the car park for supercars, it was back to track action as the Paganis would go around the circuit. It was only about a week or so before this event I’d witnessed the same Zonda Revolucion and Huayra BC do laps at Fuji Speedway. I didn’t come here just for the Paganis, honest.

No matter how many times I see and hear Paganis go around a track several times, I’ll never get tire of the sight. It was rather nice seeing and hearing them on a different track to Fuji though. The Revolucion still sounds like a demonic creature, especially on the main straight at Suzuka. While the Huayra BC still sounds like a jet engine. No bad thing at all. It goes like one too.

After that it was time for some other road cars to go on track. This included some of the best supercars and hypercars in recent history as well as a couple of classics, a road-legal racecar, and even a random Super GT car. The variety of cars was unbelievable, though the driving was a bit underwhelming. 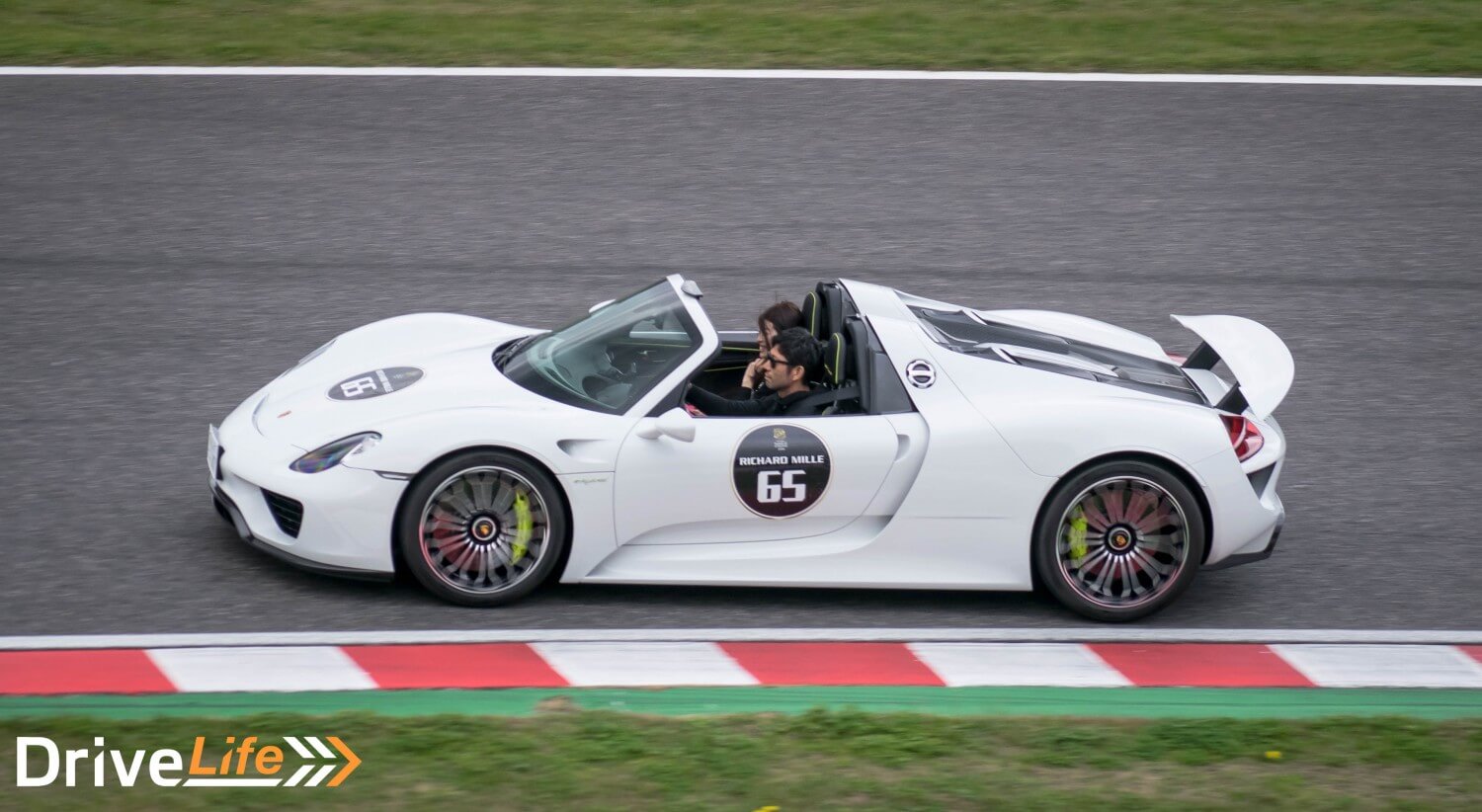 That said, the guy in the Porsche 918 did look like he wanted to push the car a little bit more but was held up by a Ferrari Speciale in front of him. It was a shame the 918 and P1 never raced each other properly on Suzuka though. On a side note, a special shoutout to the owner of the pink Liberty Walk Aventador. We’ve seen this car at various events but I didn’t expect to see it here let alone driving on the track.

For some of the owners it was more like a nice drive out on one of the most legendary tracks in the world with their friends, as in the case of the Lamborghini owners who showed up at Suzuka just before they were supposed to go out on the track.

It was a very cool contrast to see these modern supercars go around the same track that Group C and old F1 cars had gone on earlier. The hybrid hypercars with more or less the same, if not more, power as some of the racing cars here were damn near silent as they went around. On the other hand…

Once all the road cars had gone back in, it was the turn of the Group C cars. You could tell this was the main event and this was what people came to see because when the F1 cars and supercars were out, there weren’t many people out by the spectator stands. Or at least they didn’t have their cameras with mega zoom lenses out. But as soon as it was announced over the loudspeakers the Group C cars were getting ready to go out, you’d have thought the Queen was out there or something.

There was no grace period. There was no preparing for it. The noise these cars made was deafening. They were loud. They were brash. They were unforgiving. Basically, if the Sound of Engine was just to appreciate the sounds of engines, all they’d needed to go was send these Group C cars out for a couple of laps and that’s job done.

In a time where the prospect of silent electric and hybrid cars loom over us like a cold, depressing cloud, it’s events like the Sound of Engine that keep the love of cars, bikes, and the internal combustion engine alive. Motorsports these days feel the need to be at the forefront of ‘green tech’ with diesels at Le Mans, EVs at Formula E, and small turbocharged engines at Formula 1. It’s unlikely we’ll ever see and hear cars like these competing again, so I hope the Sound of Engine and others like it continue to allow everyone to experience these cars and their sounds.

The day ended with a final parade of the supercars around Suzuka. It was a fitting way to end this epic event and seeing all those cars go around the S-bends in one group will be something that still sends chills down my back. From old Formula 1 cars, to ear-shattering Group C cars, and of course some of the best modern road cars on the planet, the Sound of Engine was easily one of the best track days I’ve been to. It’s also one of the best motoring related events I’ve been to and is also one of the highlights for me this year. Stay tuned for Part 2 to see some of the cars I found in the pit garages and car parks at Suzuka. 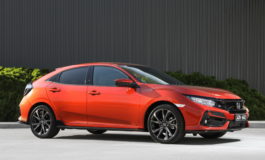 Redesigned 2020 Civic Hatch - and the RS grade is back! 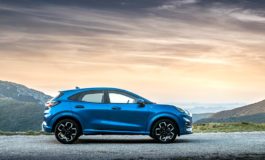