Back in March 2015 I drove the Toyota 86GT for a week, and I was impressed. When the invitation arrived to drive the facelifted model, I was intrigued. When I found out it was at Bruce McLaren Motorsport Park in Taupo I was excited. These cars are great on the road, but getting the opportunity to drive one on-track was not to be missed.

It must have been hard for Toyota to decide what to do to improve the 86GT. It’s a great looking, great driving car and changing the formula too much could have spoiled it. Fortunately they have chosen to go with subtle improvements, and I think they’ve done a great job.

Changes from the outgoing model include new bumpers, giving a more integrated rear splitter, and a lower, wider look. The spoiler has been changed to a slightly smaller aluminium piece which I really like. There’s a new 10 spoke wheel design. Headlights and tail lights have been re-styled and are now full LED, with DRLs, and 86 logos in the sides of the headlights. The manual model has a re-designed exhaust manifold, and a better flowing intake manifold, which is coated in a lovely textured red finish. Because of this, power is up slightly at 152kW/212Nm, an extra 5kW and 7Nm. This translates to 0.3 seconds off the 0-100 time. Fuel consumption is down from from 9.0 to 8.4l/100km. The auto version retains the same engine and figures as before. Inside quite a lot has changed. The dash is covered in a suede material, matching the perforated alcantara seat centres. The rest of the seats are leather and can be specced in black or red. The three-dial instrument cluster is new, with a 4.2” colour screen for road speed, gear indicator and other information. It’s cleverly split into two by the curve of the gauge, and one side can be used for a lap timer, G-meter, power/torque graph and lots of other things. There are new buttons on the steering wheel to control all this. The stereo is a new touch-screen unit which also displays the image from the reversing camera.

There are extra safety systems in the new model – Hill Start Assist, Emergency Stop Signal, and the traction control has a new Track mode. As a response to customer feedback a space saver spare wheel is included as standard instead of a repair kit, reducing boot space by only 6l to 237. On the day, four 86GTs were available to test, two manual, two auto. First up was a drive around Taupo’s back roads from the airport to the track, with driver changes to make sure everyone got to drive both manual and auto cars. The drive brought back memories of all the little things I liked about the 86. The frameless doors, those front arches which you can see in your peripheral vision when sitting low and snug in the comfortable seats, the frameless rear view mirror. The new instruments are clear and the new displays are a little geeky, but that appeals to me, and probably to the average 86 enthusiast.

Then there’s that gear shift. It really is excellent, with tight, short throws, making every shift a pleasure, though it took me a while to get to the point where shifts were as smooth as I wanted. And the noise! The 86 has a “sound pipe” from the intake to somewhere above the pedals, to transmit growly noises into the cabin. It works well, giving a very pleasing sound as you accelerate, and the tweaks to the intake and exhaust manifolds make it sound even better than before. It’s hard not to rev up to the 7.5k redline every time you accelerate, with a grin on your face the whole time. The rev counter is designed so that at 7k (where maximum power is made) it’s vertical. There’s a red shift light at that spot just in case you get too carried away. The ride is still firm but Toyota have tweaked several things in the suspension, thickening brackets and cross braces, and tweaking the springs and dampers. It does seem a little more comfortable on the road than the outgoing model.

At the second stop I swapped to the auto model, a big grin on my face from the first half of the drive. This is a great car to drive on winding roads, satisfying on corners with great steering and feel, and just enough power and noise to make you grin. A lot. In normal auto mode, the 86 is programmed more for efficiency and tends to select a higher gear than I was using in the manual. Switching to Sport mode helped a bit but after a few minutes I slotted it into manual and started using the paddle shifters on the steering wheel to change gear. I discovered another grin-inducing feature, it blips the throttle on downshifts. The auto doesn’t have the same engine tweaks, and it is noticeable, mainly by the noise. The manual definitely sounds better. Performance-wise it’s harder to tell, but the manual does seem to have more urgency about the way it accelerates. The whole drive was made in pretty heavy rain, but the 86GT wasn’t upset by this, feeling composed at all times.

After arriving at the circuit, we attended a briefing about the new model and were given information on the 86 race series, then it was time to get out on track. The rain hadn’t eased, and we were asked to keep the stability control fully on. Fine by me!

The first couple of laps were as a passenger with a race driver, and I tried to take in as much as possible about what lines to take, and cornering speeds. Then it was my turn. At first I was a little too enthusiastic on the throttle in the rain, with the stability control saving me from sliding a couple of times. It’s not too intrusive though, stepping in when needed then easing off again. I’m told the previous 86 was a bit too heavy-handed in this situation and it’s good to know it has been worked on.

Once I got more used to track driving, and learned to be smoother on the throttle and brakes I was able to have some real fun. The 86 loves the track, accelerating hard, turning in beautifully and giving confidence when braking. After about 15 minutes I was ready for a break, and had an even bigger grin on my face than earlier. If you have one of these cars, you need to do a track day!

The final exercise was on the skid pad, and a small coned-off handling circuit, giving us the opportunity to turn off the stability control in a safer environment. Drifting, spinning and attempting donuts in the 86 was tremendous fun, and hours later I still have the smell of tortured brakes and clutches in my nostrils. And even after half an hour of this abuse by several people, the 86 was un-daunted. Except for the “slightly” hot brakes!

Finally we were offered the chance of a hot lap in one of the 86 Race Series cars, and of course I jumped at the chance. These cars start as stock 86s and are fitted with race seats, Motech dash cluster, removable steering wheel, a full roll cage, much bigger brakes, adjustable race shocks, and some engine tweaks. The original dash and centre console are retained, and they even still have electric windows!

They have raced for three seasons so far and no engine rebuilds have been needed, and no chassis replaced, even though there have been some big crashes, one even being rolled. A good indication of the car’s strength and reliability. After donning a helmet I squeezed myself in through the roll cage and fastened the four-point harness. And we were off. What a ride! Even in the pouring rain with wet tyres the grip was astonishing. I could feel the car squirming around on corners, on the limit of grip but the cornering speed was so much faster than the road car. And those brakes, so impressive! There was somewhat more noise of course, but the exhaust and engine still sounded great, added to the whine of the racing gearbox. One flying lap wasn’t enough, the adrenaline was flowing and I wanted more! But my turn was over. I squeezed myself back out in an undignified fashion, my cheeks hurting from grinning so much.

The original 86GT was good, and this one takes it up a notch, whilst retaining the original car’s character. A worthy upgrade! 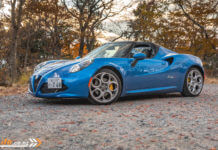