Who says Japanese car culture is dead? If the New Year meet at Daikoku is anything to go by, it’s still very much alive and kicking. This meet may well be the biggest and most diverse of the year but its a good reminder of the eclectic mix of styles and cars that make the car scene in Japan so unique.

If you’re thinking about going to Daikoku, you might as well go to the New Year meet. It happens a couple days after New Year’s Day and it’s a sort of official yet not really meet. There’s no actual organiser for this meet, it’s all done through word-of-mouth. People just know when to show up and there’s always a flow of cars coming in and going out. The car park wasn’t as packed as it was last year though it did feel like there were just as many cars, if not more. The main difference between this year’s meet and last year’s was people weren’t sticking around as long. That might have had something to do with the police coming last year to shut down the meet. Not this year, everyone was on their best behaviour. Which meant people were able to enjoy a nice warm sunny day looking at all the different cars at Daikoku. There was literally something for everyone; be it JDM fans, supercar enthusiasts, or those of the low rider persuasion. From the newest cars on the market to some of the weirdest and wackiest modified cars, Daikoku’s New Year meet had everything. When we arrived it was a bit hard not to be overwhelmed by all the cars. It was a mix of the usual weekend night crowd, typically JDM and USDM style cars, and the Sunday morning meets made up of classics and exotics. Only this time, they were all together at the same time and place. In many ways, the diversity made it feel like a motor show. Walking around the car park you can see all the different sorts of fans from all walks of life coming together through a common interest in cars. As it’s the first big meet of the year, it’s a chance for groups and clubs to come together and meet up. This year there were the usual supercar owner’s clubs, muscle car groups, and there was even a GT-R owner’s group too. Now I like seeing a nice supercar as much as the next person but this year’s meet was all about the weird and wonderful. The Honda Beat styled to look like a mini Ferrari 355 with a ‘355’ number plate brought a smile to my face. Similarly, the ridiculous black and gold Audi Q7 on unnecessarily excessive air suspension and ginormous rims made me laugh out loud. I don’t even know where an idea like that comes from but it was amazing to see nevertheless. But if we’re talking about unique builds, they don’t get anymore unique than the hand built Porsche ‘935’. Based on a 930 Porsche, this 935 build has gone on for the best part of a year. I saw it at last year’s meet in the very early stages of the project. The completed car looked absolutely insane and menacing, especially from the rear. The interior was completely stripped out, putting current so called ‘track focused’ cars to shame. There were quite a few of those present too. Cars like the Ferrari 458 Speciale, Porsche 991 GT3 RS, Aston Martin GT12, and particularly the NISMO GT-R were present. In fact, there were more NISMO GT-Rs I’ve seen together at this meet than anywhere else. There were even a couple of N-Attack GT-Rs too, which was cool. Though even those couldn’t take the spotlight away from one of the rarest Skylines out there; the R33 400R. Only 44 of these cars were made and seeing one for the first time was a real treat. Amazingly this JDM legend was only a couple cars away from another JDM legend – the 2000GT. Where else would you get a mix like that?

From Japanese legends to the latest exotics from Europe, cars like the McLaren 675LT Spider, BMW M4 GTS, and Maserati Levante were there too. These cars have only been on sale in Japan for a couple of months and the ones at this year’s meet looked like they’ve just been delivered to their owners too. So it’s great to see them taking them out to meets like this.

It was almost as great to see as the people with the Aventador SV and 911 GT3 RS who had swapped stock wheels for some unique aftermarket ones. The Hyper Forged rims on the yellow SV fit the car quite well, especially the extra aero bits. But the Pokal Wheels on the GT3 RS was a whole other kind of pornography.

But if I’m being totally honest, the Ferrari F50 that came later on was the highlight for me. A completely untouched red F50 with the original wheels is quite a rare sight in Japan. It immediately drew a crowd as it pulled in and it was a reminder that you can never know what to expect at these sorts of meets. There were a few omissions from the meet this year, such as the Morohoshi crew and the Car Guy group. But a Daikoku is never complete without loud obnoxious accelerations at the exit and this year that came courtesy of the Team KHR owner’s group. So it wasn’t too bad.

The New Year Meet at Hanyu, but especially Daikoku, are some of my favourite events on the Japanese motoring calendar, simply because of the variety of cars you get. It’s not everyday you get a meet that has a F50, 400R, bouncing Cadillacs, and a laugh-out-loud Q7. I can’t think of any better way to kick off a New Year for petrolheads.

Have a look through the gallery below for some of the other highlights from this year’s New Year meet at Daikoku. 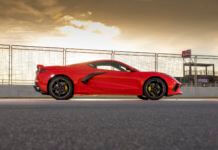 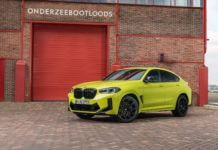