So far we’ve covered the overall plan for the car and the engine, so next is the gearbox.   As with other things on this build I certainly didn’t want to go down the “kitcar” route and end up using something donated from another car and then modified to try and do what we needed.   It’s not about being elitist or anything like that, I just didn’t want to have any compromises and based on the amount of torque that the 6.0L V12 is going to produce means that even if we did go down that track that we were likely to run into issues.  The Porsche G50 for instance is the stable choice for anyone looking to make a mid-engined car.  Some pretty straight forward modifications means they can be used / mated up to anything pretty much, however most people give them a power rating of around 450-500HP max and more importantly around 500nm max. we’re expecting around 700nm so that put us outside of that window.   Now there are ways and means to strengthen them etc, but then we’re starting to look at the same kind of money as something custom. So in short, I started to look around for suppliers who could supply us with a suitable transaxle that could cope with the power, but also be usable on the street and more importantly I wanted a sequential paddle shift style transmission.  I know some purists may think that I should have a manual, but I really like the idea of a sequential as I wanted to make this car “current” and the reality is that you’ll struggle to find any current supercar that comes with a traditional manual, they’re all twin clutch or sequential type gearboxes.

Now this is where the struggle began.  I knew that X-trac made the sequential for the Zonda R so I called them to ask since they would essentially be able to supply a complete “bolt up” experience,  they basically blanked me and wouldn’t discuss anything to do with the Pagani solution.   I’m sure it’s some kind of commercial agreement, but it was frustrating so I had to give up on X-trac.

Then I tried calling Hewland, but they would only supply straight cut gears which would mean it would be way too noisy for our needs.  They’re bloody pricey too.   Quaife was next, now if I say that Quaife were worse than useless, that would be being unfair,  they were even worse than that !!   I explained what I was doing (custom car project, AMG engine, scratch built) and the guy kept asking me what car it was for !   I said it’s not an existing car, it’s custom project,  he said, well you’ll need to look on the website to decide what product fits your needs before I can help !!  That’s the reason I’ve called the UK in the middle of the night !!  I don’t know which option is the best fit, that’s why I’ve called you guys for advice now you know our needs.

Needless to say I didn’t get anywhere and went to bed extremely frustrated !! 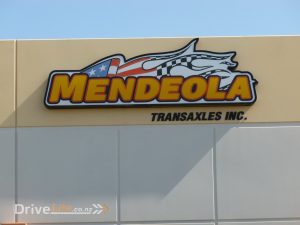 I was just starting to give up on finding someone when I called Mendeola in San Diego.   I had the same conversation with them and was told “sorry we don’t have anything that will fit what you need”.  OK I said,  deflated again….. I’ll keep trying.  The voice on the phone says “oh I didn’t say we can’t help,  I just said we didn’t have anything !!!”  Oh right !  now I’m listening !

So it turns out that Mendeola have a famous and long history in off-road transmissions and are looking to move into the road-race area.  They are interested in developing a new range of gearboxes for road-race solutions and they’re interested in partnering with us to develop something for our needs that will then become a standard product for their new range !   Amazing ! So we talked for a long time and agreed on a dog engagement sequential box, but with custom helical cut gears so it’s quiet enough for our needs on the street.   Geared to run over 200mph so we can say honestly that this car will exceed 200mph if we ever had the space or nerve!!  It means we’ll be able to use it with or without a clutch too which is important.  It would be stupid to think you could roll in traffic or situations like that without it.

Luckily for me, I was able to visit the Mendeola factory and meet with Mike Mendeola the owner and some of his guys to put a name to a face and see his facility.  These guys are true professionals and what Mike doesn’t know about gearboxes just isn’t worth knowing !

So whilst I was there we discussed all of the needs and settled on a plan and rough pricing and agreed to move forward.   One thing I did know is that I would need to have the gearbox quite early on in the build since I knew the first thing we would need to figure out was how we were going to fit that V12 and the gearbox into the existing space supplied from DDR with the base chassis.

Mendeola obviously couldn’t supply a finished gearbox to me anytime soon so what we agreed was that since they would base the new gearbox design so that it used the same pickup points as they existing S4/S5 design, that they would supply me with a casing and any other important items (driveshaft mounts etc) so that we could mock up our design using an empty case and then later on in the build we could ship the empty case back to them they would return our final box………. perfect!