When you’re thinking about buying a small SUV, maybe MINI isn’t the first brand that springs to mind. But MINI is a lifestyle brand now, not a reference to the car’s size. MINI have just released a second-generation Countryman, and it’s bigger and better equipped than its predecessor. In fact it shares a platform with the BMW X1. The Countryman has accounted for over 30% of MINI sales in New Zealand, and with the growing popularity of SUVs this share is likely to increase.  Drivelife were recently invited to the New Zealand launch of the new MINI Countryman to check it out.

MINI also offer what they call the Chilli package, which costs $5k adds about $7.5k of options to each spec level, including leather, different wheels and extra comfort and convenience features. They expect quite a lot of customers to opt for these extras.

There are 10 available colours, 9 upholstery options, 7 interior styles, 7 wheel choices, various exterior stripes, different colour roof and mirrors, plus other accessories like driving lights and off-road-looking bits, so there’s lots of scope to personalise your MINI.

My first look at the Countryman was inside the BMW showroom when I arrived in Palmerston North for the launch, and in there, the blue one looked huge. On the road they still have quite a presence, but they retain similar proportions to the original and new-style MINIs, and I think they look great. Looking at the three launch cars parked in a row it’s clear that the choice of colour and accessories, such as roof bars, makes a big difference to how the car looks overall.

A walk around the cars revealed lots of really nice little details, and a lot of MINI logos. They’re everywhere – inside the lights, on the chrome trims, on the roof bars, even in the puddle lights, which project a MINI logo onto the ground. A lot of attention has been paid by the designers to add small touches and extra bits, which help to make the cars feel more special.

Inside it’s a similar story. The dash is dominated by that huge circular display with LED-lit surround. It echoes the look of the big speedo found in the classic MINI and is certainly a point of difference for MINI. If you have the right options ticked it’s a touch screen. If not there’s also an iDrive-style control knob near the handbrake. The instrument cluster is the same as other modern Minis – very minimal and a bit like a motorbike cluster with a round speedo, rev counter hanging on one side and a series of lights of the right for fuel level. It even moves up and down with the steering column adjustment. It has a small colour digital information display inset in the speed for the odometer and various other functions. 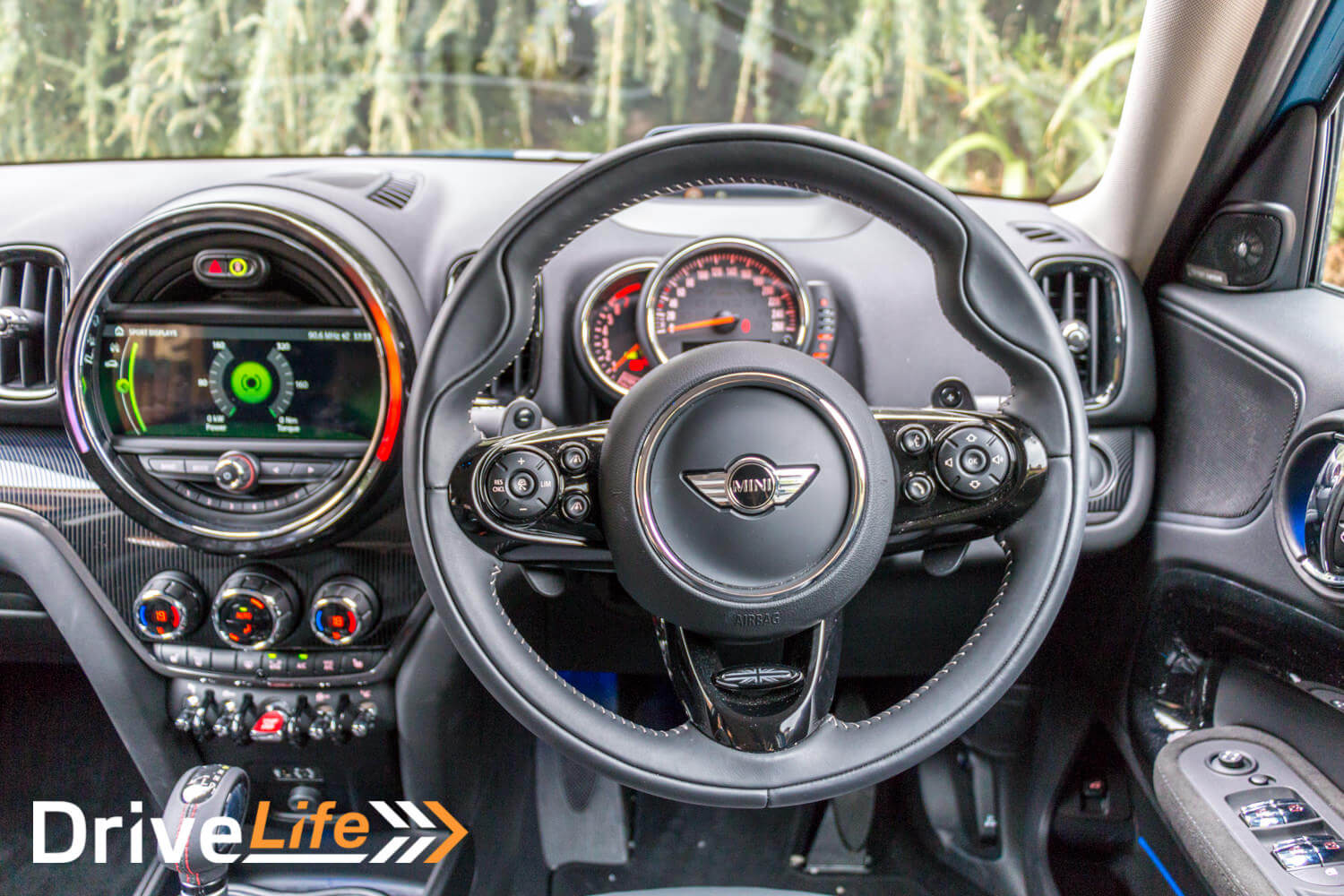 Under that big central screen are three nice, chunky knobs for the aircon controls, and under those are several old-style rocker switches for various functions. This is where things get a bit busy I think, as there’s another bank of rocker switches up above the mirror, and the placement of some of the controls seems a little random. For example the MINI has ambient mood lighting – LED strips in the doors, LED lights in various cubbies, and even parts of the dash have a muted glow. This can be any colour you want but it took me ages to find the switch to control it. I was looking in the menu system under personalisation, then around the car until I eventually found a button next to the map reading light switches. That said, the MINI interior is lovely.  The seats are really comfortable, both the cloth and leather versions, with great support and lots of adjustability. The rear seats are also comfortable, and rear leg room is massive with them in the normal position. The rear seats have a clever sliding system so you can create more boot space when needed. Even fully forward there’s decent legroom. The sliding function has a 60/40 split, and the folding backs are 40/20/40 split so you can drop just the centre section to get your surfboard or ironing board or whatever inside the car. 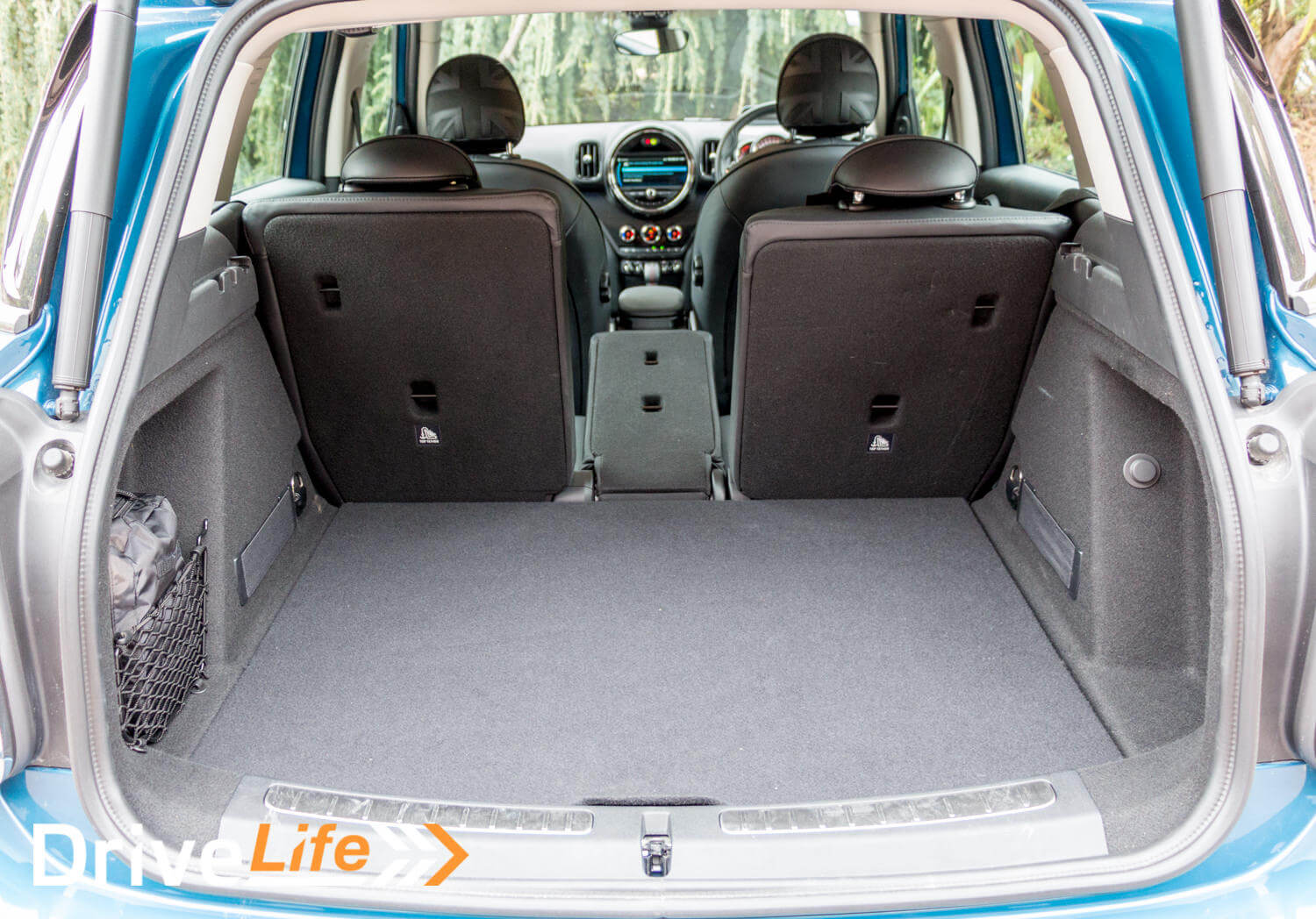 The boot is also huge, and has a false floor with an extra compartment underneath. There’s even an accessory (for $250) which gives you fold-out a picnic bench to sit on. It folds into the compartment and attaches with magnets. Clever stuff. Everything is well thought-out, with side net pockets, hooks for bags, loops for tie-down straps or a cargo net, power sockets, even the false boot floor locks in place when pulled up to you have both your hands free to rummage in there.

And there’s the electric tailgate, which can be operated with the kick of a foot under the bumper, or with the key, or a button. Very flexible. 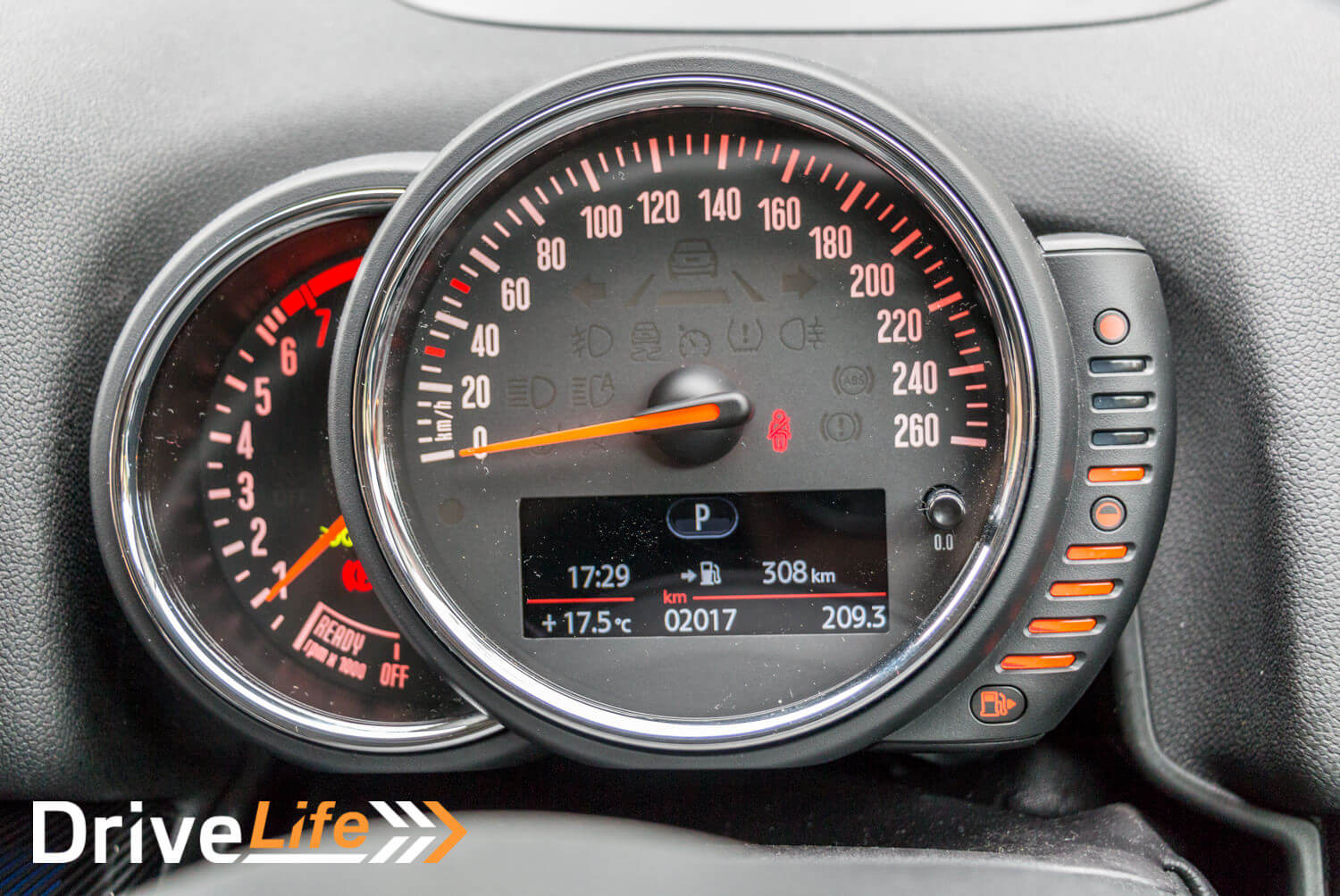 One detail I really liked about the last MINI was the starter switch. Sit in the driver’s seat, foot on the brake, and it lights up and pulses slightly. “Press me” it says. Again, nice little touches. These are the sort of things that make a car more interesting and desirable. 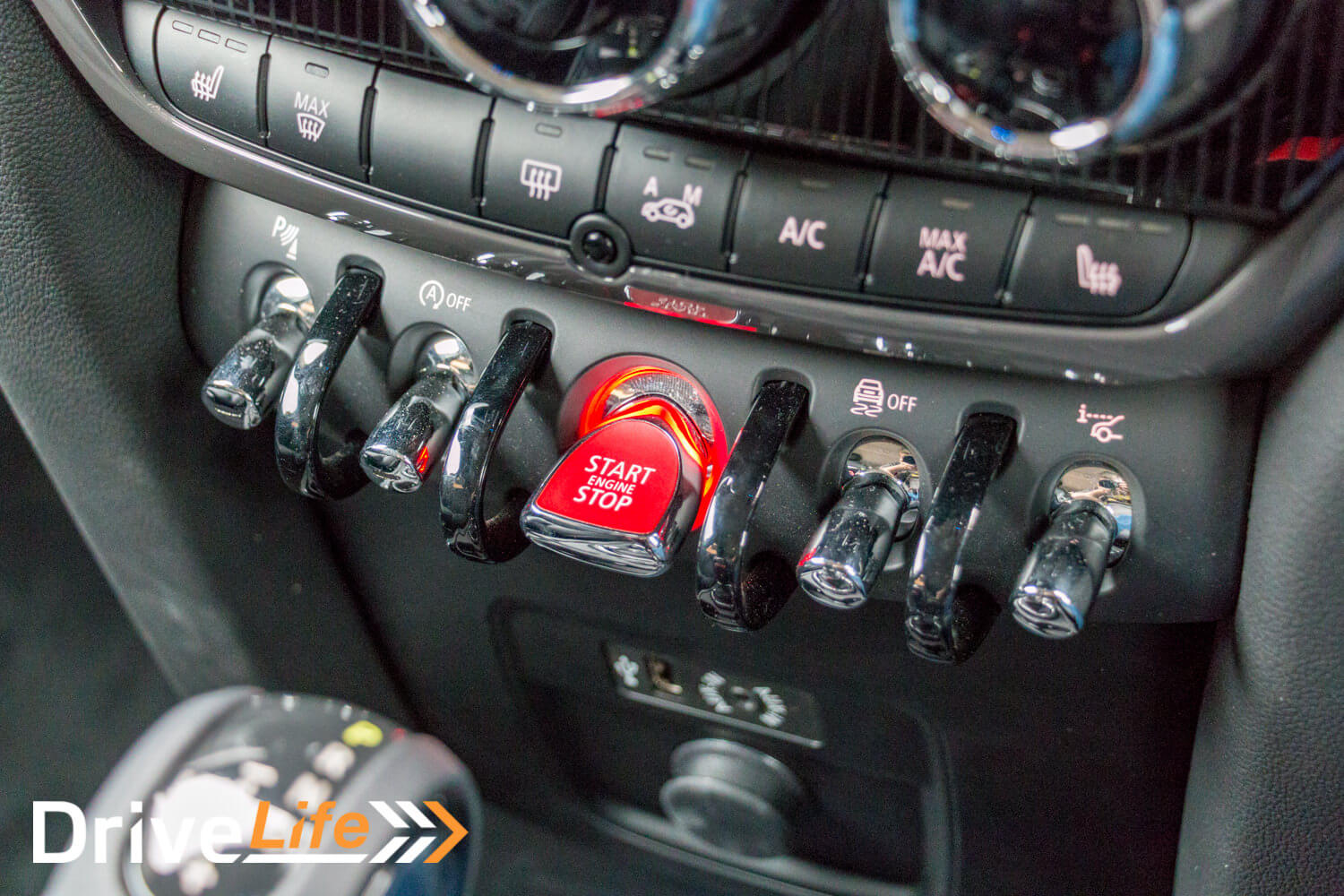 Over the two-day launch I got to test both the Cooper and Cooper S on a variety of back-roads and highways. A lot of it was twisting back-roads, which are the sort of roads the standard MINI eats up, leaving a great big grin on the driver’s face. Could this big SUV version live up to that level of driving fun and involvement? In a word – yes! The ride in the Countryman is very firm, not uncomfortably so, but you are very aware of the road surface and any lumps and bumps. This translates to excellent handling, with surprisingly little body roll. Despite its tall profile and decent ground clearance the Countryman holds the road in pretty much the same way as the normal MINI. It’s quite amazing how much it can be chucked around, to the point where you forget how tall the car is and just drive. Especially in Sport mode – which the display tells you gives “maximum go-kart feel”. Both the three and four cylinder turbo engines have a great, torquey feel to them with not a hint of turbo lag. They both make a pleasing growl too when pushed.

In normal driving both engines push the car along nicely. On back roads when I was more focused on driving for fun, I found myself wanting to change down on the way out of corners in the Cooper for a bit more go, but that one was missing the paddle shifters found in the Cooper S. The 2.0l turbo engine and the 8-speed auto in the Cooper are a great combination, and in that car I found that rarely shifted gear as the car always seemed to have the right one already.

External noise is well damped, with tyre noise being the most noticeable on the rougher back roads but it’s not particularly intrusive.

So it seems that making the MINI taller and bigger has no disadvantages. It’s still great fun to drive, looks and feels like a MINI, but you get more space for passengers and luggage, more ground clearance, and even a 4×4 option. 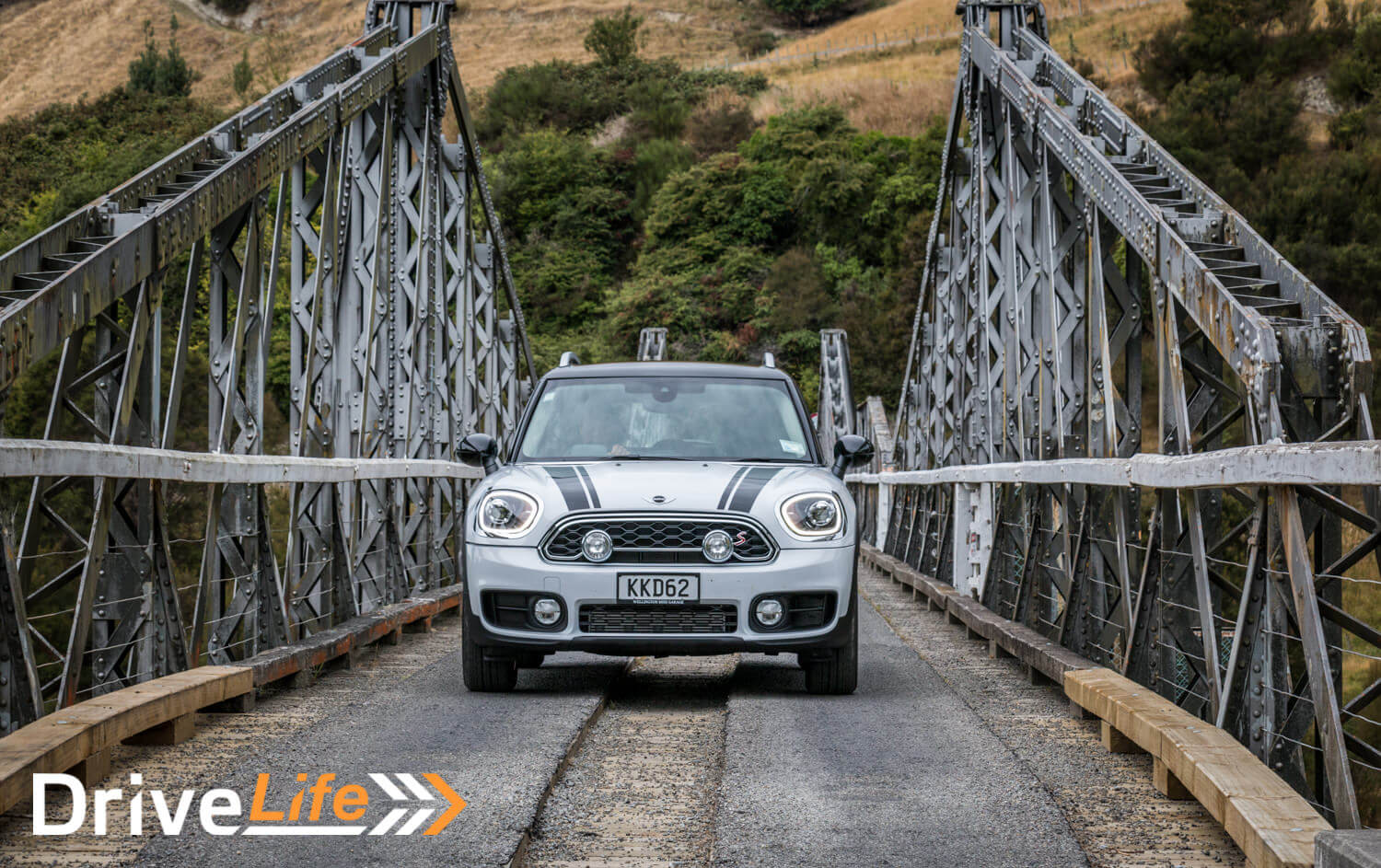 Overall the MINI Countryman is a great package. It’s great fun to drive, spacious, comfortable, and has lots of clever touches. If you’re after a small SUV, or SAV as MINI call it, then this should definitely be near the top of your list.