With all the controversy with diesel over the last year or so, many brands are unsure about its future. Mazda is standing strong and pushing the technology into its next-generation Mazda6 sedan and wagon. Are they behind the times of the other hybrid cars, or is there still life left in the diesel market?

You have a range of 8 colours, Titanium, two blues, silver, white, black, Machine Grey and Soul Red. Both Soul Red and Machine Grey are $300 extra and my money would go on the red all day every day, due to its depth, shine and paint fleck.

The entire range covers a huge amount of features, which would just leave me listing multiple paragraphs of 3 or 4 letter words. So I will spare you that and move on to what the Limited model is all about. 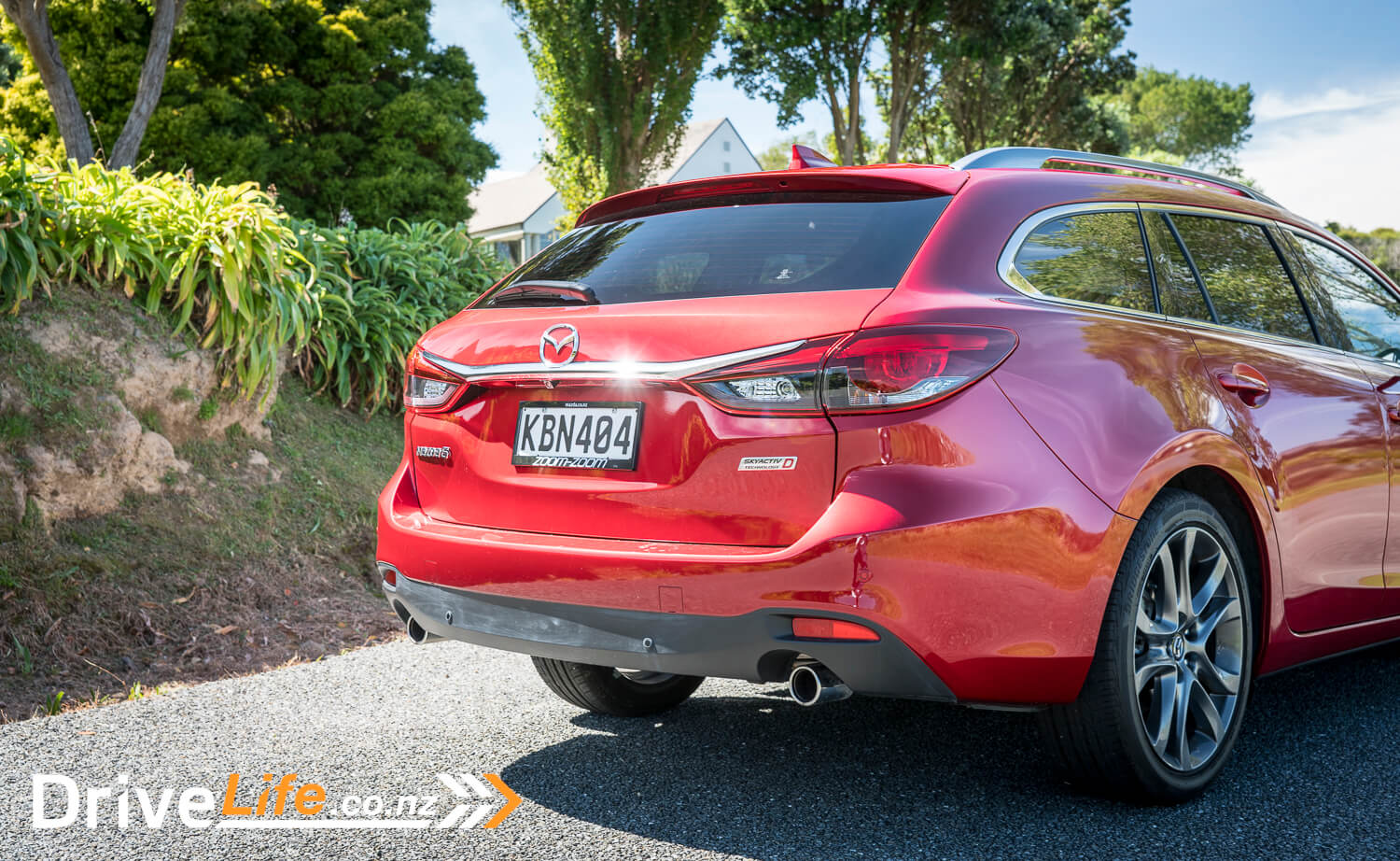 It’s Soul Red and it’s a damn good looking wagon if I do say so myself. I daily drive an Audi RS6 and before that, I had a BMW 550i Msport wagon. And to be honest I am very picky about my cars, they have to have a certain look or appeal to them, and this Mazda6 definitely has appeal. The wheels were the right look and size, and I was very impressed with the new grille. From every angle, this vehicle had smooth flowing lines, and a powerful stance, combined to make this a great looking car. In 99% of cases, when picking up a review car. There is always one thing that sticks out as being cheap or a corner cut. But I couldn’t see anything, except the lack of tints on the front windows, which are due to international market laws. 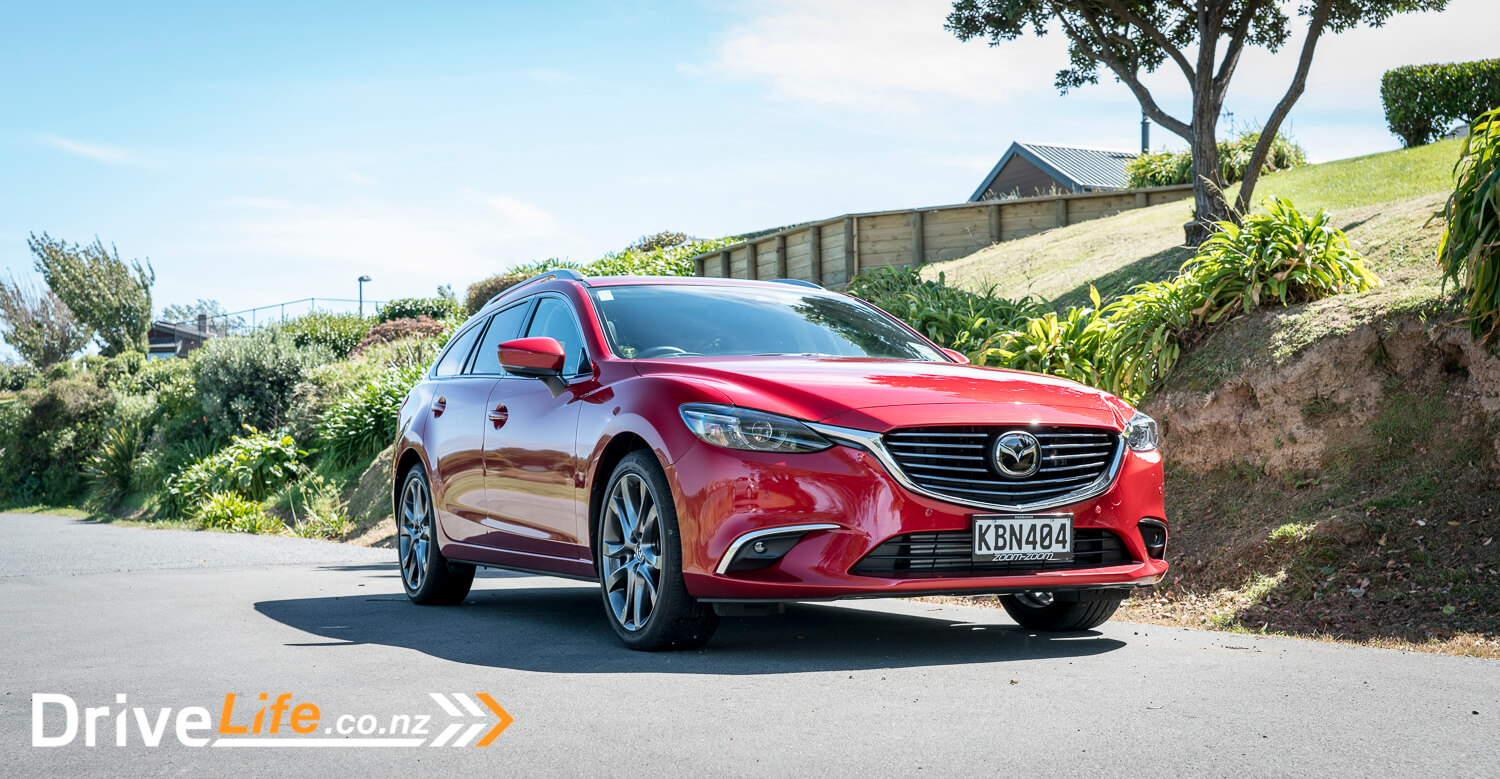 Back to that Soul Red paint, which is an optional extra at $300. I am not going to do something daft and compare it to Ferrari’s Rosso Corsa Red, but it has that same charm. There was something special about it, something deep and more vibrant than other reds. If the average Joe knew what automotive paint cost, they would quickly see that the $300 extra is a bargain, and its worth is measured in the ability to make this car stand out from the crowd.

To me, the rest of the colours, let this car blend into the background blur of all the other black grey and silver cars out there. Fred, one of the other Drive Life reviewers, would agree with me this, but then again, he would say that about any car that is grey or silver. This is where many cars at this level can fall and crumble – choice of materials for cost-saving benefits, or finishes that seem to have no style whatsoever. But the Mazda6 did not disappoint. Once inside, and if you put you had covered the Mazda badge on the wheel, you could easily trick someone into thinking they are in a Euro car. And that is exactly what this interior should be saying. Euro cars have had their interiors sorted for some time now, but they still have a stigma to them, of being expensive to run and maintain.

Regardless if they are or not, if any brand can lift themselves up to this level for less cost than a Euro, it makes that model and brand become the second choice. As I mentioned before, my own car is a German vehicle, and apart from some carbon fibre, these two cars are not a million miles apart. Yes, mine is an older car, but this Mazda has the look and feel of a well tailored European interior. 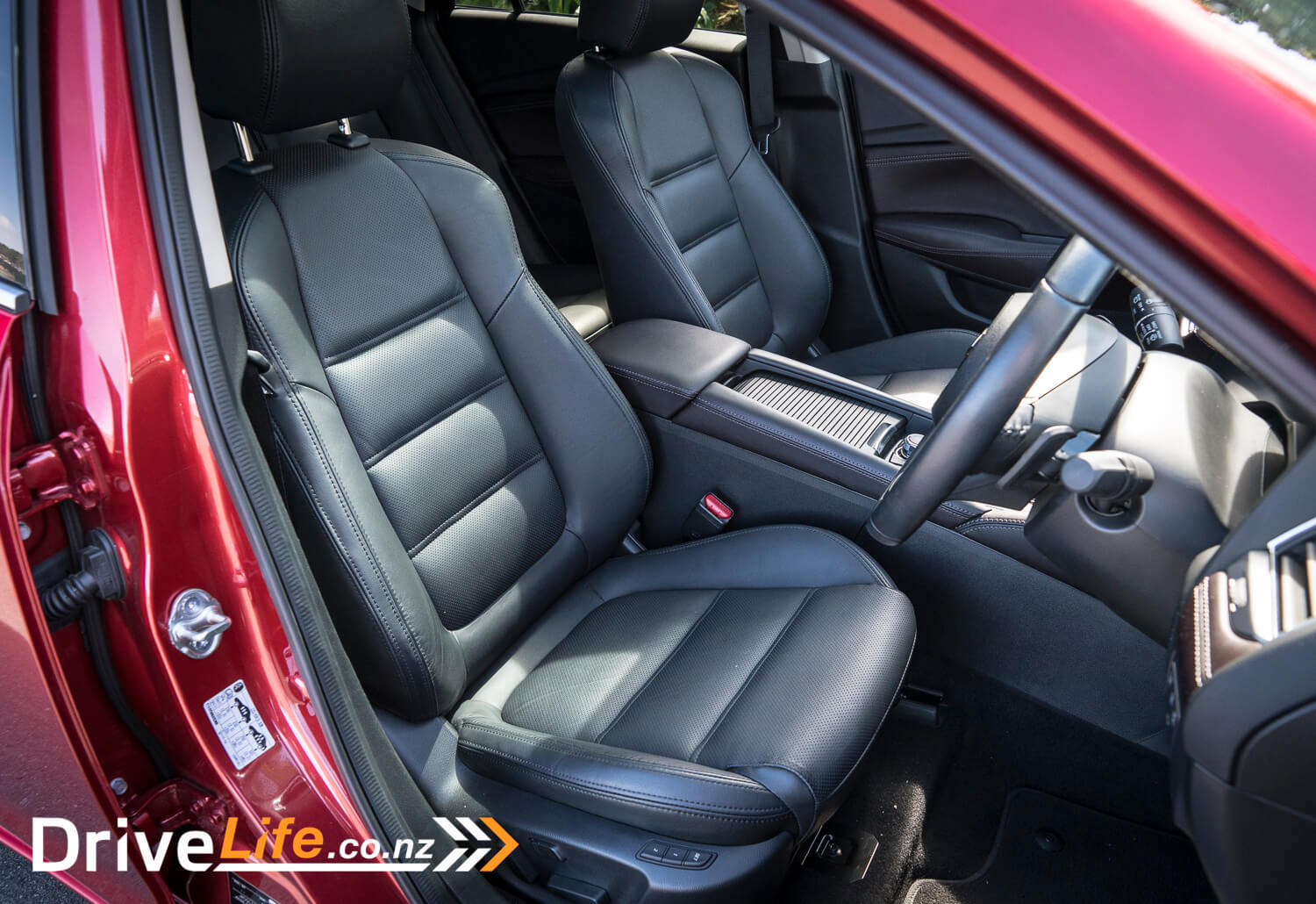 The seats were one of the better features, and so they should be. Both front seats had a nice contoured feel, with decent side bolster supports. In the Limited, you can option to have pure white leather seats with feature stitching. Our test car had the more standard black leather, which I was more than happy with. In the front, you have a 8-way power driver’s seat with lumbar, heating & 2-position memory function and a 6-way power passenger’s seat with heating function. Both main rear seats also have a heating function.

The heads-up display was great. However, I must confess to not liking it at first, purely because it was a piece of plastic that popped out of the dash when you started the car. But after a while, it didn’t matter. And like the saying goes, “if it’s a stupid idea and it works, it’s not stupid”. With the range of info available, from speed, navigation direction, location based speed limits, active cruise control and lane assist, it was almost impossible to fault it. 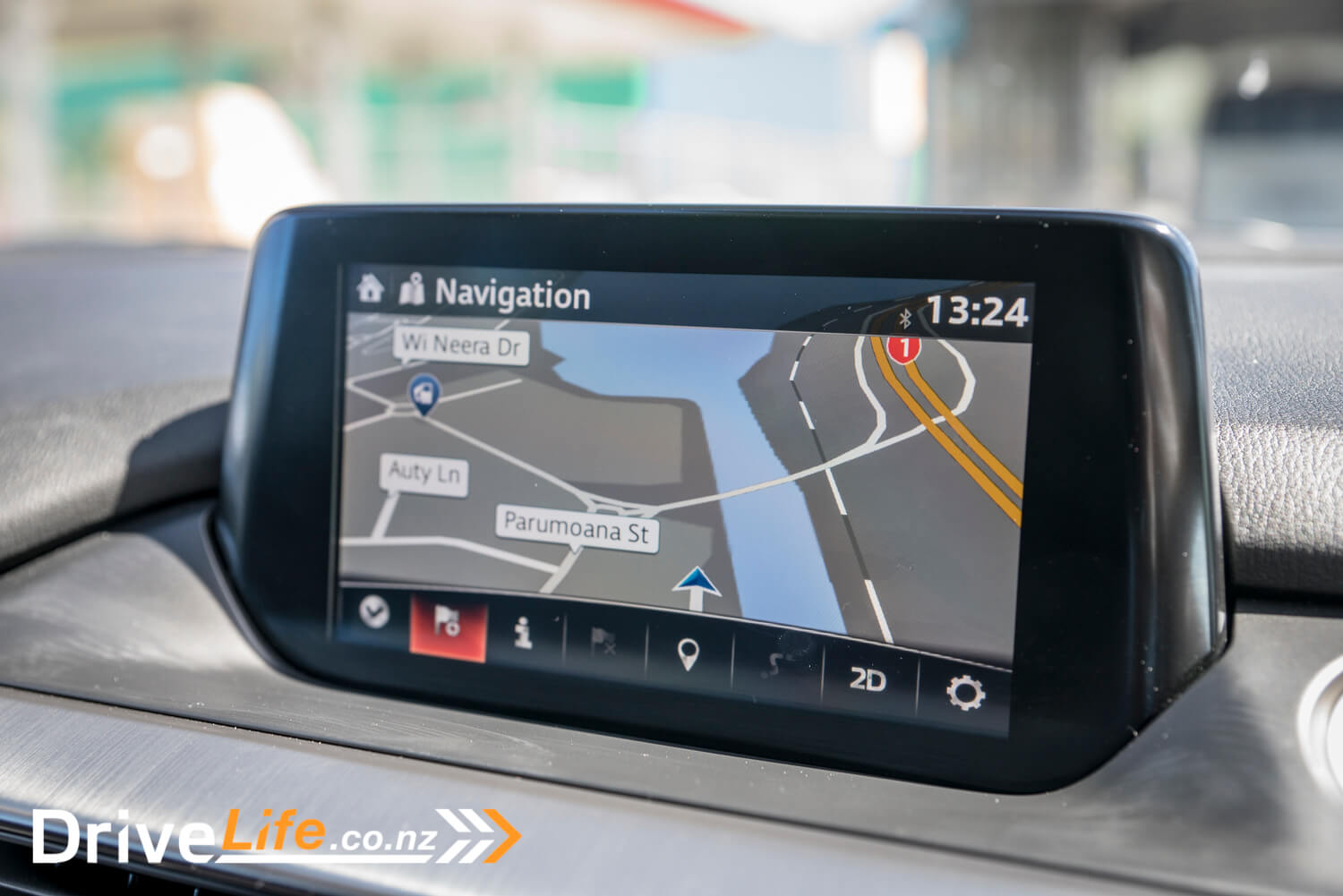 The media system was how I like them. Quick and simple to use, one main row of buttons and generally one sub-menu, making anything quick and easy to activate – which means fewer distractions for the driver. No sign of Apple CarPlay or Android Auto, which would have been nice to see, and no known plan from Mazda to add either to any future models.

The Bose audio system was another high-quality touch to this vehicle – the same brand my own car has too. The 11-speaker premium 231 watt audio system was no disappointment. Great clarity within the cabin no matter where you sat, and you could tell that the system had been designed for its interior space, you always felt like your head was exactly in the right position for the best sounds.

The only feature that felt a little dated was the sunroof. It’s all about the panoramic roofs now, and the old-school sun roof shaped hole cut in above the driver and front passenger is letting the car’s overall modern styling down. A panoramic roof would have made been the cherry on the cake, completing the styling package. After hearing what Rob had to say about the petrol 2017 Mazda 6 Limited Sedan – Car Review – Comfortable Cruiser, I was curious to know how the diesel would compare on the road. There is no mistaking the fact that this car is a diesel; it sounds like a diesel, but it’s still fairly quiet as far as diesel go. The other noticeable part is the torque – a lot of it, and available instantly. This was a major difference between the limited petrol and diesel model.

When you wanted some extra go, maybe for quick overtaking manoeuvre, it was there at a moment’s notice. This was all thanks to the SKYACTIV-D 2.2 litre inline, 4-cylinder, 16 valves, DOHC intercooled turbo diesel engine that produces 129kw and 420Nm of torque. That’s 9 kilowatts less and 170Nm more torque than its petrol variant. I expected the kilowatts to be close but was surprised there was such a difference in the torque figures, considering they were both Limited spec models.

That extra torque made all of the difference when you’re on the motorway. RPM was low leaving the cabin quiet, comfortable and relaxing. This car was designed to go the distance and leave you feeling refreshed afterwards. Around the city, the Mazda6 wagon was a doddle to drive. Light steering gave it an oddly nimble feeling, considering it’s a full-size wagon. I was never left feeling the car was too big or that I didn’t know where I was on the road in relation to anything around me. 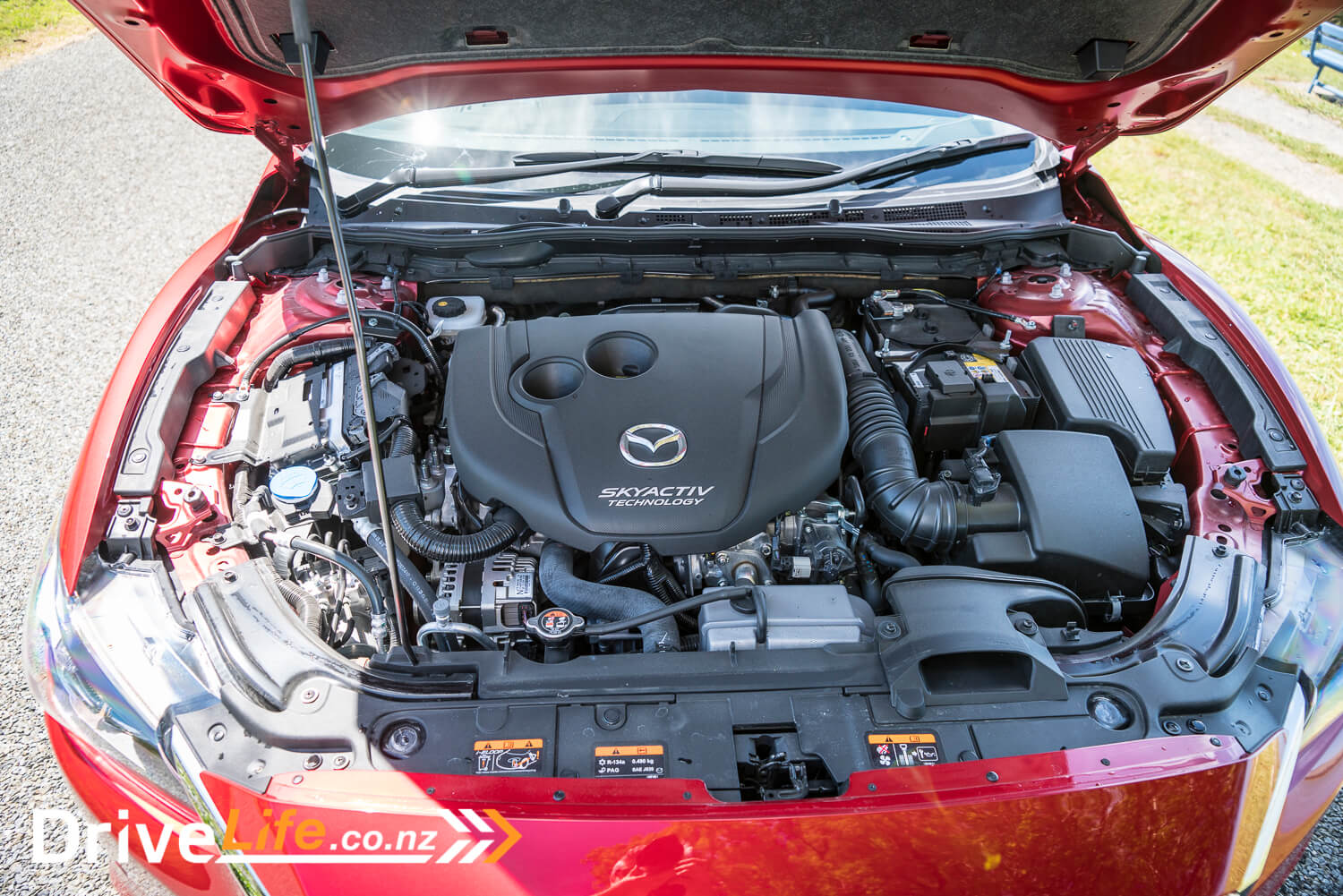 The range of safety specs that came with the Limited seemed impressive. As part of what Mazda call their i-ACTIVSENSE Safety Technologies, you get the follow features. Adaptive LED Headlamps (ALH), Smart Brake Support (SBS), Mazda Radar Cruise Control
(MRCC), Lane-Keep Assist System (LAS), Lane Departure Warning (LDW), Forward Obstruction Warning (FOW), Smart City Brake Support – Reverse (SCBS-R) Driver Attention Alert (DAA). yes the list of 3-letter systems are ever growing, and sometimes hard to keep up with as every brand is trying to put their spin on it.

The biggest – and I would almost say my only – gripe about on this car were the rear view mirrors. It’s an odd thing to have a gripe about I know, but I found them far too small and limiting. They are small and narrow and did not seem to have any convex shape to them to help you see more of what’s around you, like many other cars. I found that I had to move my head up and down, in and out just to see what was around me when driving. I also found it annoying when I was parking or reversing, as I like to use the mirrors instead of stretching around to see where everything was. Without affecting the look or design, I think this issue could be fixed with more convex mirrors to increase the viewing angle. My height could have been a factor here, but it’s not something I notice in other cars.

Enough of the day-to-day, it was time to see if the Diesel Wagon liked to have a bit of fun. Before I even reached my regular stretch of road to test handling and sportiness, I already knew it would be a different experience to the petrol model and that there would be no protests from the engine. Once I reached my test section, into sports mode I went and off we go. As you would expect from any auto, sports mode increased the throttle and gear shift response, which meant you can have all of those torques even quicker than they had been delivered in normal driving mode. What surprised me the most about this car, was that it did not feel like a wagon, it was sharp and nimble and quick to change direction. It could have been a hot hatch, as you did not feel there was a lot of car being dragged behind you. It won’t leave you speechless, but it will put a cheeky grin on the corner of your lips, confirming to yourself, yup, that was fun.

At this point I started to wonder who would be the general customers for this car, would they be Mr and Mrs Bloggs or would they be company reps. It was hard to say, as the market has been swinging towards SUV’s for almost everyone. But my conclusion was the same, no matter the outcome, whoever was driving it, family or rep: they would enjoy driving this car. 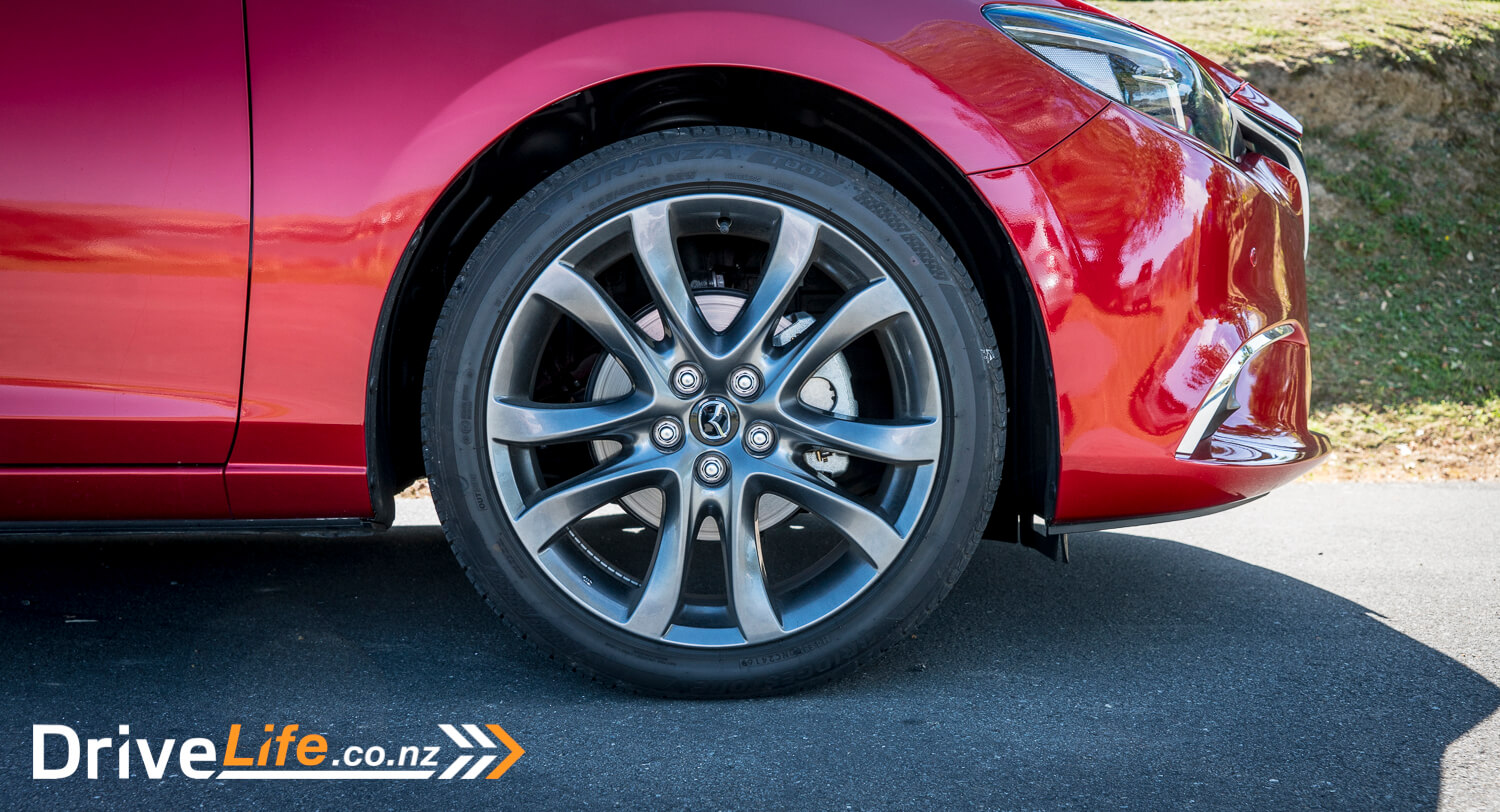 When you look into it, it’s pretty obvious that the market has changed direction. There are not many brands selling new wagons, and even fewer selling diesel wagons. So your options are a bit limited within the price range, however, the options themselves are pretty good. The Mazda sits exactly where I expected it to, just under the major Euro brands, and just above the rest of the market in price and spec. There was a lot to like about the Mazda6 Diesel Limited, but it’s no home run for Mazda. Yes, it’s a great looking car, and sits well beside the Euro options, for styling and spec. But there were a few areas that it just dropped the ball with options that are standard with other brands. Like the lack of a power boot, which is a must have for a top spec wagon and SUV these days. And the old school sunroof without a panoramic roof option, left it feeling like it would age very quickly.

Overall I liked the Mazda6, it was nice to drive, and you got a decent spec for the price. And if you wanted to you could have a little bit of fun in it too. However, if Mazda keeps the 6 wagon diesel in the future, they just need to fine tune the package they have to make it a no brainer homerun. 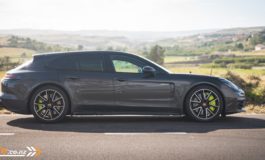 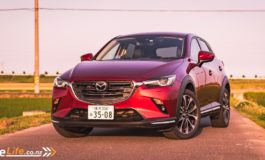