Monday mornings are usually nothing to be excited about, it’s the start of the work week, and it’s usually preferred to stuff your head under a pillow and hope it just goes away. But this Monday was different, this Monday was the first day of the 2017 BMW M Festival, which I have been invited to. This made getting out of bed at 4:45 am to get to Wellington Airport at 5:45 am so that I catch the 6:15 am flight to Auckland one of the easiest things I have ever done. I knew that at the other end of this trip, there would be the entire BMW M range waiting to be tested around Hampton Downs.

After a quick briefing, we got right into it. And I must say it was hard to pick where to begin. So with no real logic to it, I decided that we should just start at the bottom and work my way up.

BMW M2 – I had yet to drive the M2, and I must admit that my expectation was quickly reached. This was one cheeky and feisty compact performance coupe. From the get go, you notice it has less in the way of toys, like the HUD that every other M vehicle has. Why? Well its because BMW wanted this to be a more tactile experience, more in tune with the original M cars. And with less distraction, you were able to focus becoming one with the car. The balance seemed to be almost perfect, so nimble and light on its feet. And the sound was to die for, each time you asked for more, you got it. The inline 6-cylinder, pumping out 272kw and 465Nm of torque, propels this car from 0-100 km/h in 4.3 seconds. And after each power request, if that sound was not enough, you were applauded with some snaps and pops. it was like the gift that keeps on giving.

My 10c – I am not sure I would want this car as an everyday driver, but as a track focused toy, it would be hard to beat. 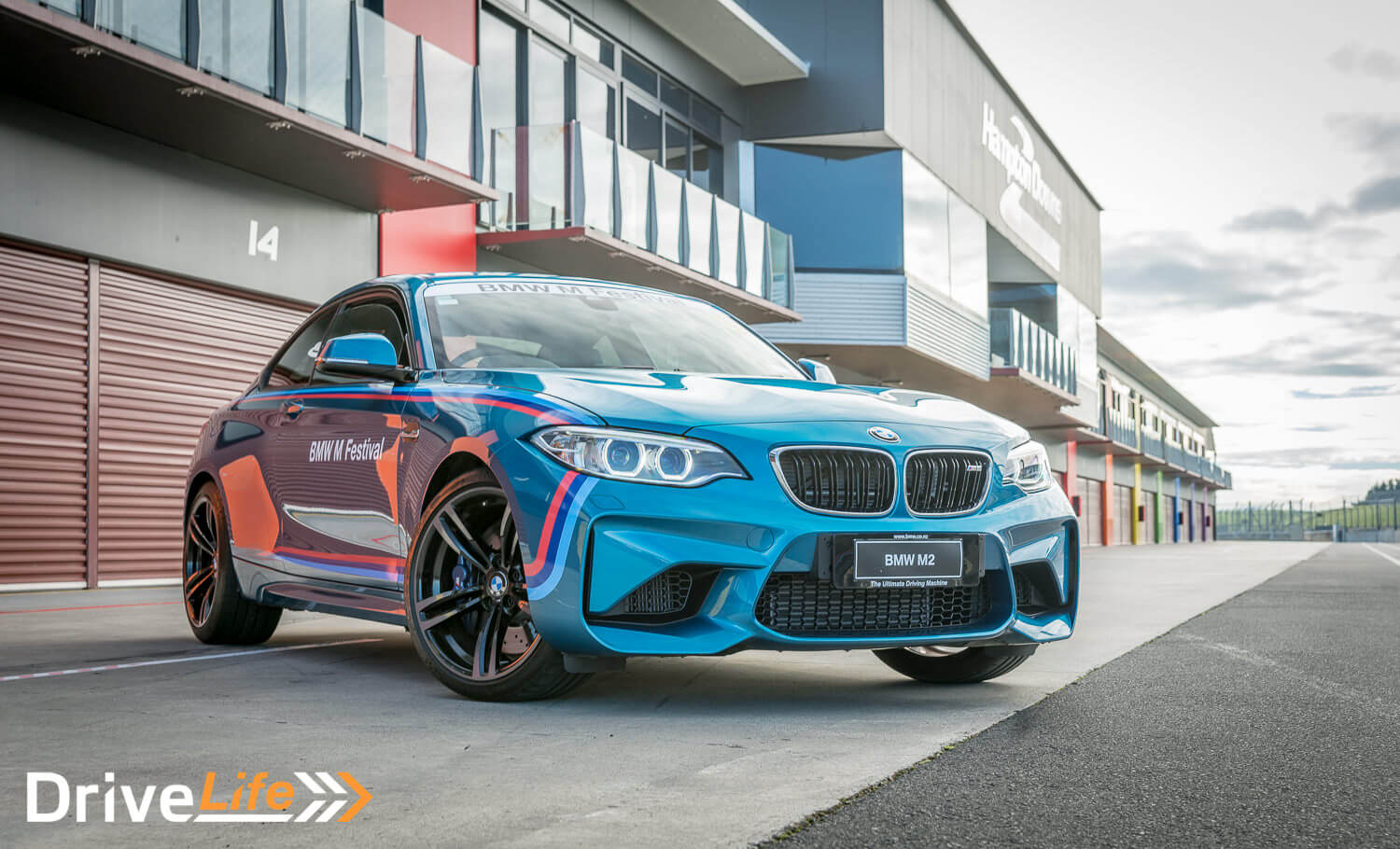 BMW M3 – The most iconic of them all: the M3. Now only available as a 4 door sedan, with no signs of there ever being a touring or coupe variant again.  DriveLife had been at the M3 and M4 launch at Hampton Downs, so I knew what to expect. This car handles like a dream, carving up the salmon course we experienced. And it did it surprisingly enough in an ever so slightly quicker time than the M2, which I put down to smoother power delivery. The majority of the drivers found the same thing. Spec wise, the M3 has 317kw and 550Nm of torque, which allows it to reach 100km/h in just 4.1 seconds. The M3 did what anyone would have expected of it time and time again. Even after an hour of continuous laps around the track, there was no sign of it faltering. BMW M4 – The M4 is much like the M3 in overall performance and feel also delivering 317kw and 550Nm of torque. The weight difference between the two cars is very minimal too. Which is seen by the exact same 0-100km/h time of 4.1 seconds. You do however get what feels like a better and lower driving position, that taller people like myself find a lot more comfortable or natural. Both cars sound great but different, and the same can be said with the driving feel: so close, but different. It may have been the red mist that caused the death of a plastic cone through the salmon, but you just can help getting excited and fully absorbed into its M heritage when behind the wheel.

My 10c – Between the M3 and M4, this one is my personal favorite, as I have a weakness for a coupe. And the styling feels that little bit more aggressive BMW M5 – At the end of its life cycle the BMW M5 was a great car to have in the lineup to test. It’s an Autobahn demon with a badge that every enthusiast knows well. This was another car I had not driven, however, I knew what it was all about as I daily drive the direct competitor; the Audi RS6. Comfortable, stylish and powerful, this super executive performance car, can take you from coast to coast without feeling drained and maybe even hitting a track on the way through. Its age was starting to show, with a twin turbo V8 that has 412kw and 680Nm of torque, its 0-100 time was 4.3 seconds – 0.2 slower than the M3 and M4 and the same as the M2. But all that highlighted was the progression of technology. This was very obvious after testing it back to back with the rest of the lineup. The M5 is a great car and handles so well for its size. However when you compare it to the new X5M, it is not as nimble, or aggressive, which leads me to think if the next M5 will be on the same platform, it will be astonishing.

My 10c – If you’re looking for style, ultimate comfort, and 4 door practicality, and your wallet is deep, then this is the one for you. But you might want to wait for the new model that’s just around the corner.

BMW M6 – Much like the M4 compared to the M3, the M6 is the very similar to the M5. If you’re not after extra doors or just don’t have any friends you want in your nice BMW, then the M6 might be your cup of tea. Also at the end of its life cycle, I was surprised to find that there was a rather noticeable difference between the M6 and M5 – more so than the M3 and M4. Sounds were very different, with a richer and deeper grumble, which I loved. And the lower seating position again is perfect for taller people. Pushing out the same power, 412kw and 680Nm of torque, delivering 100km/h in 4.2 seconds. I found that I was having a bit more fun in the M6 compared to the M5. But this may just be my weakness for the coupe and mixing this with the richer sound may have sealed the deal for my subconscious.

My 10c – For style and comfort this can’t be beaten, and as long as you don’t need more than 2 doors this grand touring is a formidable bit of kit you won’t be disappointed with. I just can’t wait to see what the next one will be like.

BMW X5M – This was the obvious Titan on the track. Like a hippopotamus trying to hide amongst a herd of gazelles. This thing was massive, and you could not help to think what are BMW thinking? Are they just slapping an M badge on anything they can find these days? Surely this school bus would be left in the dust of the real M cars. And I must admit, I did think that for a bit.

But once you climb aboard, and start it up, you quickly realise how savage this hippopotamus is. Sitting up front is the twin turbo V8, making 423kw and 750NM, that tows this monster from 0-100km/h in 4.2 seconds. That’s faster than the M2.

OK, so its got so much power that its fast in a straight line, that’s not hard to do. Once on the track, we will see it fail on the first corner. Out on the track we went, and we sat behind an M5, M3 and M6. Those numbers and letters are iconic, and normally not to be trifled with. But the X5M was jaw-droppingly amazing. With the M2 button was set to sport plus, I sat in behind each one of the M cars without breaking a sweat – or falling out of my seat for that matter. It’s like some physics-defying technology that keeps this 2.2-ton behemoth, on the track, at speed, no matter the corner. This to me was the most impressive vehicle of the day, it should not be able to do what it does, but it can, and it does it as well as any of the other M cars at the track.

My 10c – The X5M is not a SUV anyone needs, it’s something you want. And that’s because it’s so silly and that every time you drive it you will be left with a stupid grin on your face. BMW have a bold claim, stating that M is the most powerful letter in the alphabet. And as they old saying goes, “put your money where your mouth is”. BMW have done just that, leaving us with an eye-watering, drool-covered decision to make. Thankfully, BMW seem to have something for everyone. With that being said, If I could have them all I would. And if I just had to pick one, then it would be the M2 for me, as I already have a pretty decent daily driver.