The Abarth 124 Spider is FIAT’s new open-top sports car. Well that’s not strictly true, as it was co-developed with Mazda and shares a large percentage of its parts with the MX-5. Built in Hiroshima alongside the MX-5, it has different body styling, engine, suspension and brakes. We loved the MX-5 when we tested it last year, awarding it our maximum five chevrons, and more recently the MX-5 RF also got a great score. How does this car compare? Is it just badge engineering or truly something different?

There’s just one spec of 124 Spider available in New Zealand at $52,990, but you get a decent equipment level Including keyless entry and start, reversing camera, tyre pressure monitoring, Bose sound system, ABS, ESC, auto lights and wipers, heated leather seats. Abarth have added some standard features that Mazda left out of the MX-5, including self-levelling LED headlights, Adaptive front lights, rear parking sensors, blind spot detection and rear cross traffic alert, headlight washers. For the same price as the MX-5 Limited. Overall the Abarth 124 is 30kg heavier than the MX-5. There is the option of a six speed automatic transmission in place of the 6 speed manual, for $2k extra. 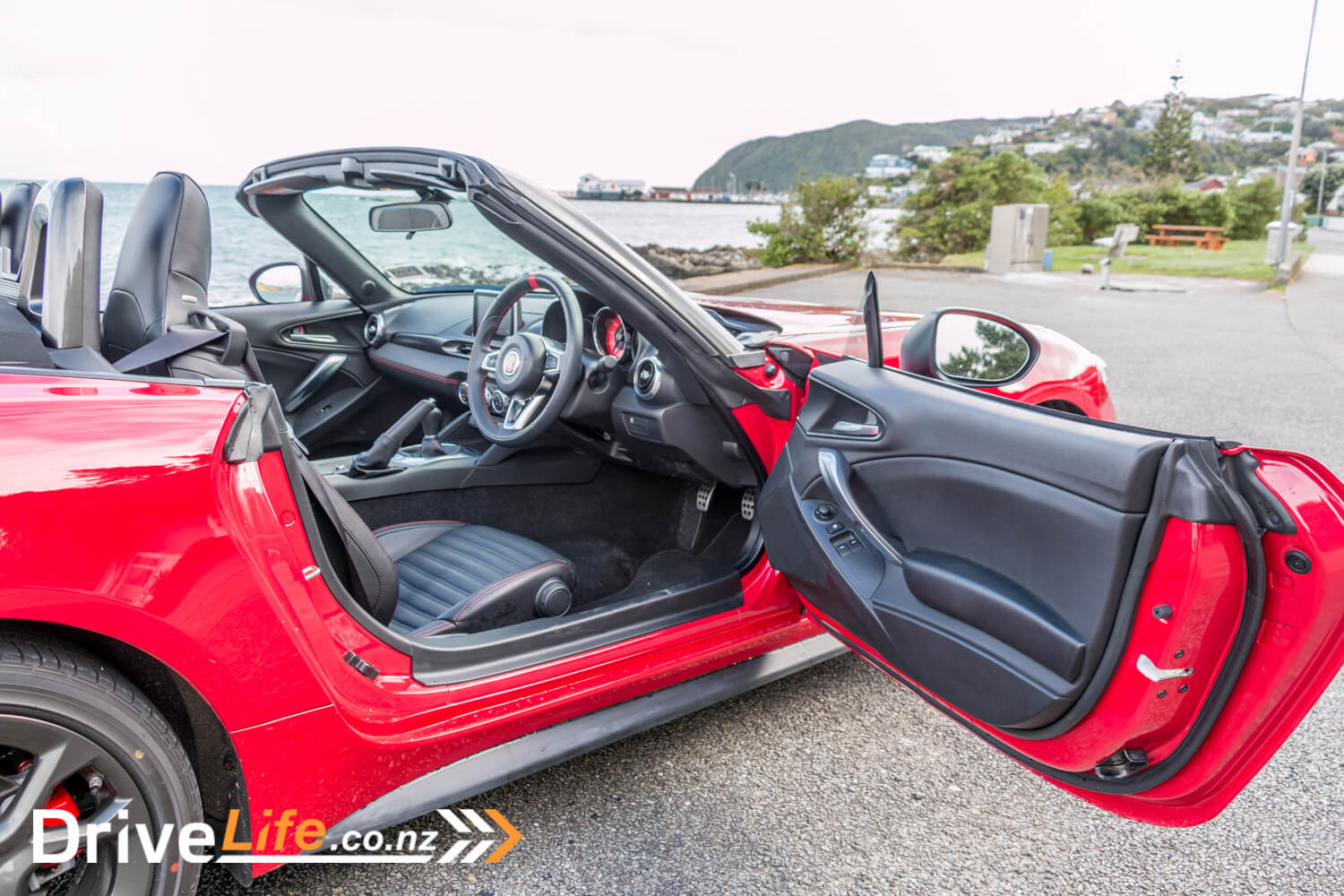 I really like the looks of the 124 Spider. From photos it seems to polarise opinion amongst car enthusiasts, but in the metal, everyone who I spoke to said they really liked it. The front has a bit of a big-mouthed look to it, but it works. The rear, with is low stance and quad exhausts looks almost like a mini-Maserati. In fact I think the rear is the best view of this car. They’ve even managed to make it look good with the roof up.

The red-painted Brembo calipers look great, though for some reason the rears have red calipers but silver carriers, which looks a little strange. The interior of the 124 Spider is fairly simple, as you’d expect in a sports car, but it’s not short on equipment. The seats are the first thing you notice, full leather with a ridged pattern to the centres, and an Abarth logo at shoulder height. The side bolsters are supportive and firm and the seats are very comfortable. They’re manually adjusted, as is the leather-trimmed steering wheel. The wheel has an integrated red stripe to indicate centre position, like a race car. I like this.

Similarly, the instruments are performance-focused. There’s a large red central rev counter with a small inset LCD to show what gear you have selected. There’s a smaller speedo to the right and a circular digital display to the left for fuel and temperature gauges and trip computer. A minor irritation is that the speedo markings were obviously designed for a different market and there are no markings at 50kph or 100kph. It would be nice to have these marked in red so you can see more easily at a glance that you’re within the limit. 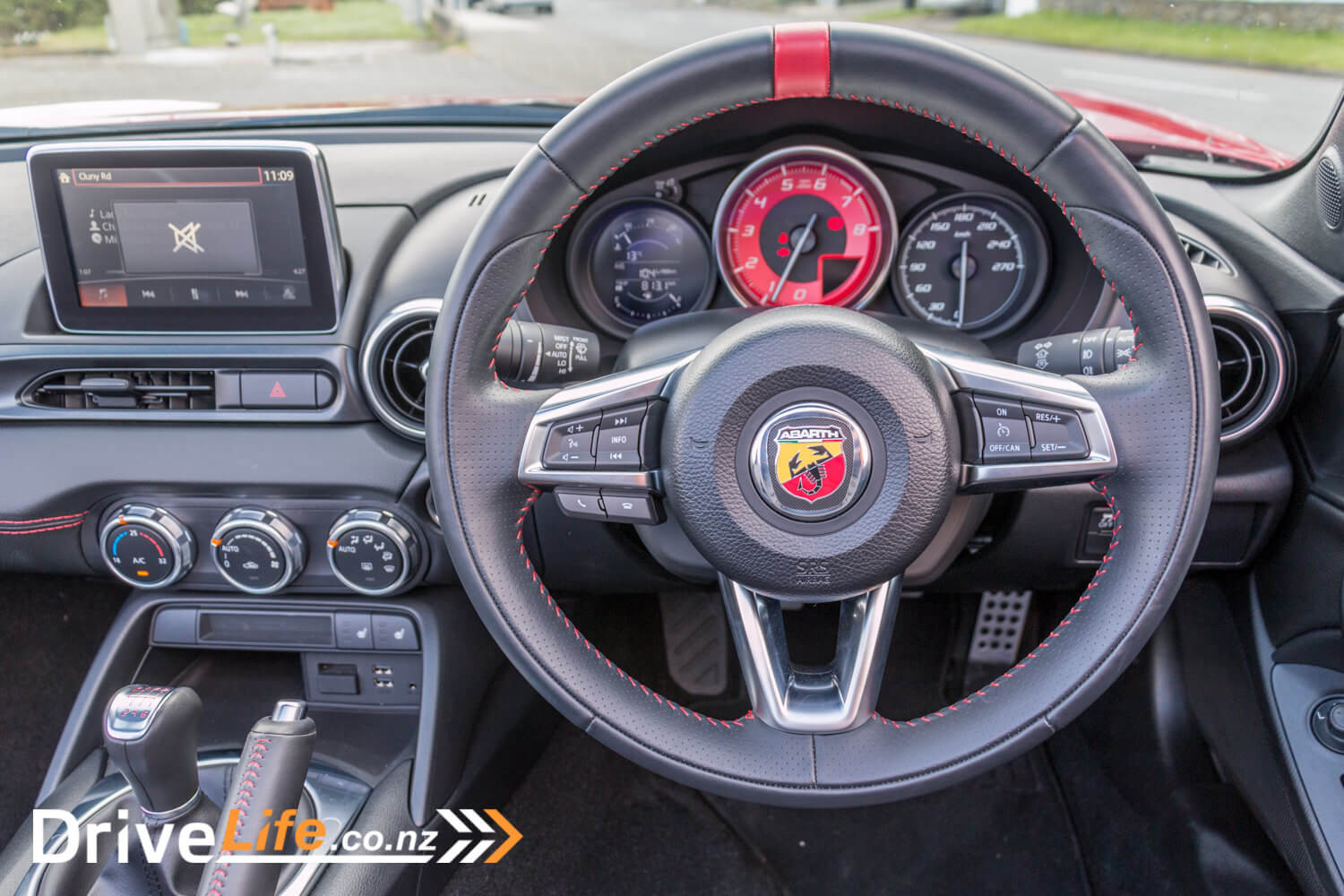 The central 7” touchscreen will be very familiar if you’ve driven any current Mazda. It’s exactly the same, and that’s a good thing. Controlled by a knob on the centre console near the handbrake or via touchscreen, it’s a simple system to use and I’m glad Abarth didn’t mess around with it. The satnav is clear and easy to use, and can show the current road speed limit, which is a great little thing to have.

With the roof up there’s a lot of head room. Partly because you’re sitting pretty much on the floor, but it’s surprisingly roomy. With the roof being black it still has a kind of closed-in feel but it’s way better than I expected. The roof is really simple to operate and can be opened or closed in a matter of seconds. Pull a single central lever and the windows automatically open halfway. Then just push the roof backwards, then down to lock into place. Done. Even my six-year old could do it with little effort. Closing is just as quick.

The boot is a reasonable size, with a surprisingly deep space. It’s just 140 litres but you could get plenty of bags in there for a weekend away. There’s no spare wheel, just an aerosol tyre repair kit. When you go from most other cars to a car like the 124 Spider there’s always a bit of a learning curve on how to get in and out gracefully. The seats are very low so you have to kind of stick a leg in and drop into them. Once I was in being hugged by those comfy leather seats, with the sporty wheel in my hands, I thought “Yes! This is where I want to be”. Unfortunately it was raining hard when I collected the 124, so putting the roof down wasn’t a sensible option.

In traffic, visibility was pretty good despite being so low to the ground. I was glad of the blind spot warning lights in the mirrors when changing lanes as the back of the roof blocks a chunk of your over-shoulder view. The clutch is pretty light and the gear change, like the MX-5, is excellent. Short shifts and really satisfying to engage.

The suspension is noticeably less forgiving than the MX-5, but not quite as hard as a GT86. Abarth chose to install Bilstein frequency selective damping shocks, stiffer springs and a strut tower brace, which have definitely improved the cornering feel of the car. In fact the first time I took some tight corners in the Abarth I was surprised at how it feels. It feels like rather than steering around corners you’re rotating the car around a central point. I carried on driving past my house and drove for another 20 minutes around the back streets, just feeling how it corners and grinning. The Abarth has 50:50 weight distribution and a mechanical LSD which both help with this – the way it corners is fantastic.

As soon as the rain stopped, I put the roof down. In fact every time I drove the car for the rest of the weekend I had the roof down, for five minute trips, even at night when it was 6 degrees. This is how the Abarth 124 has to be experienced and that roof is so quick and easy to operate that it’d be rude not to. With the roof down you can hear the exhaust more clearly and it sounds pretty good, quite deep with a pleasing woofly noise when you lift off the throttle. It can be a bit too boomy at times though. Wind is well deflected around the cabin even when doing 100kph on the motorway. If you’re over 6ft you’ll need a hat as your head will poke above the windscreen a bit, and if you’re much taller than that you won’t be able to fit your legs into the driving seat. Sorry, tall people.

A good test of cabin quietness was to make a hands-free phone call. Unusually, every time I used the voice control function to do this it worked perfectly – first time. That in itself is impressive. Everyone I talked to said they couldn’t tell I was driving at 50kph when talking to them. The call was clear and easy to hear at both ends. There are speakers set into the headrests for driver and passenger which form part of the 9 speaker Bose stereo, which features an amp and subwoofer and sounds excellent.

The Abarth 124 Spider is one of a small number of cars that has made me laugh out loud in delight when driving. It really is an absolute pleasure to drive. The power delivery is very linear despite it being a turbo engine. It never seemed to bog down or feel over-boosted like some turbos can. The rear tyres are fairly skinny so it’s very easy to accidentally spin the rear wheels a little when setting off from junctions. The traction control is excellent though, it doesn’t allow so much slip that you look like a hoon, but on tight bends there’s enough that the car will feel as though the tail is starting to come out before it catches it for you, making you feel like a great driver even if you’re not. Engaging Sport mode with the button on the centre console loosens it up a little more and sharpens up the throttle noticeably.

The last night I had the 124 Spider I took it out for one more drive out on the back roads to Makara. This is the sort of road where the Abarth really comes alive – tight bends and short straights where the performance, steering and braking really come into their own. Slotting through the gears with that wonderful tight, short shift I was having so much fun that I really didn’t want to go back. At one point I came to a 60kph zone and thought ‘Better ease off”, checked the speedo and I was doing 59. This really is a car where you can have a cracking time without doing silly speeds, and that’s one of the big benefits. There’s enough power for some thrills, great brakes, sublime handling, and that’s all you really need.

All of this back road fun didn’t do great things for my average fuel consumption – I managed 9.3l/100k compared to the quoted figure of 6.4 but my driving was about 85% back roads and shorter trips so I’d expect this to be lower in normal use. There’s really not a lot to compare with the 124 Spider in this price range. Each car offers something different and you need to test them all before making a decision. The Abarth 124 Spider is a great little sports car. It has plenty of performance to have a great time every time you drive it. I guarantee that if you’re a driving enthusiast it will put a grin on your face.

To answer my question – is this just badge engineering? No it’s not – Abarth have retained all of the great features of the MX-5 but have added their own twist with looks, handling and extra tech. It’s an excellent car in its own right and I think deserves the full five chevrons.

Would I choose it over the MX-5? Yes I think I would. The harder suspension wouldn’t please my wife, but I like the way it feels, and I prefer the looks, though that’s a close call. 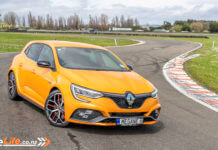 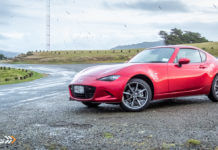 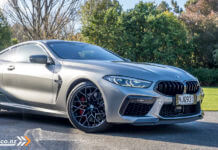