The current, familiar, and hugely popular Suzuki Swift has been around for nearly seven years. So it’s high time for a replacement, and that’s what Suzuki have provided. With a new lightweight platform, which is shared with the Baleno and Ignis, the new Swift offers more technology, new engines and with the weight loss from the previous, this model should be more nimble than ever.

Next up is the GLX auto with a CVT transmission at $24,500, which adds front fogs, 16” alloys, adaptive cruise control, lane departure and weaving alerts. The last model Swift was extremely popular, so it’s probably best that Suzuki haven’t messed with it too much. Even though it’s all new it looks very similar to the last one, with a nip here and a tuck there to make it look more modern. The rear door handles have been moved up into a black strip in the window line which along with the black A and B pillars creates a floating roof effect.

There are new LED running light strips in the headlights and in the RS, LED projector headlights, giving it a more modern look. And that deep metallic red on our test car is lovely, not dissimilar to Mazda’s Soul Red, and that’s a very good thing! Inside the Swift RS there are a lot of features and modern conveniences, but Suzuki’s dedication to making it lighter means the quality of the materials has suffered. The dash and door trims are made of light tappy plastics and are not the greatest. Get into the driver’s seat and the side bolsters squish down, there’s no reinforcement in there, just foam, and I imagine they won’t keep their shape for very long. They are comfortable though and adjustable enough to get comfortable. The steering wheel adjusts in four directions too.

The flat-bottomed wheel is leather-clad and nicely shaped, with thumb buttons for the trip computer, cruise and stereo controls. The gear shifter is similarly solid feeling and well finished. At least they didn’t skimp here.

The rev counter and speedo are in large twin pods, softly lit with red LED lights, with another red LED strip across the top. It looks great and the instruments are nice and clear. In between the pods is a white-on-black screen for information display, trip computer etc.

There’s a 7” touch screen stereo in the centre of the dash which has a bit of a tacked-on look, though it’s better integrated than the same unit in the Ignis. It’s a crisp, clear screen which also displays the reversing camera. There are touch buttons for home, settings, on-off, and a slider for volume. These work well, better than expected actually.

In the back there’s excellent leg room for a car this size and the seats are comfortable too. The rear seat backs split 60/40 and fold to extend the luggage space from 242 to 556 litres. Pairing my phone to the Swift’s Bluetooth was one of the most frustrating experiences I’ve had with a car! There’s a Connect section on the main screen but that only does Android Auto via a USB cable. I’m not a big fan of Android Auto, I just want to keep the phone in my pocket and let radio waves magically beam my music to my ears. So I dug through the menus and found a tab in the radio screen for Media, which had a source for Bluetooth which led to an “Add a device” screen. I played with it for about ten minutes but it would not pair. My phone and the car saw each other but would not exchange PINs. So I went back into the house and got a USB cable, grudgingly installed Android Auto on my phone and connected it that way. Once that had connected, Android Auto set up the Bluetooth connection for me and I was able to remove the cable and use it how I wanted. Twenty minutes to do a job that normally takes 20 seconds, very frustrating! But this is a one-off job, and once it worked, it worked well with great sound quality, fast pairing each time, and it went straight back to Bluetooth with no button presses, unlike a lot of cars.

We had a couple of other glitches with the system. Once it continued playing tracks but the screen froze until the car was turned off and on. And after my phone received a text message a notification came up on the screen to say so, but it wouldn’t respond to any presses on the screen. Very frustrating! The fiddly stereo kinda spoiled my first impression of the Swift, but frustrating though it was, the most important thing about a car is how it drives. Here, the Swift doesn’t disappoint. The steering is quick and accurate, and the light weight really makes a difference. It’s nimble on the corners with minimal body roll, and the ride is still comfortable. Suzuki have done a great job with the chassis. It really is good fun to chuck around on a twisty road.

But I’m sorry to say there is something that lets it down a bit here too The little 3 cylinder turbocharged engine gives great power, and makes a great noise, but the way the car changes gear can be a bit frustrating as it always seemed to have a higher gear than I wanted. This resulted in a fraction-of-a-second delay every time I wanted to accelerate out of a corner as it shifted down a gear or two. It’s a bit slow off the mark from a standstill too, again a fraction of a second before it picks up and goes, but it’s enough to be irritating. In a small car with an RS badge I want it to feel nippy, but this feels like it’s always in eco mode. Maybe it needs a Sport mode. Of course you can use the flappy paddles to change gear and make it drive how you want. There’s a manual mode too, except it’s not really full manual. The red line is at 6,250rpm but as soon as you hit 5500rpm where maximum power is made, it shifts up for you.

There’s lots of technology included with the RS. Radar cruise, LED headlights, lane departure warning and auto high beam are almost unheard of in a small hatchback but this car has them all and they work brilliantly. Those headlights really are excellent.

But elsewhere I’m put off by the cost cutting – the driver’s window has one-touch down but not up. There’s keyless entry but if you stand by the boot with the key it doesn’t see you, so you have to unlock the car first. A rear foglight isn’t required in New Zealand so there’s a black plastic blanking plate instead. Little things, but they all add up to take the shine off what could be a cracking little package. I’m in two minds about the Swift RS. On one hand it’s a great little driver’s car with a cracking engine, good mechanicals, decent space, and lots of safety tech. On the other hand the cost-cutting approach to materials and frustrating stereo and gearbox would definitely put me off buying one. Maybe when the software is at version 1.1 it’ll be great but until then there are a lot of excellent alternatives. 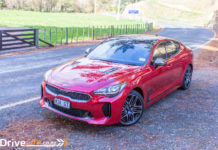