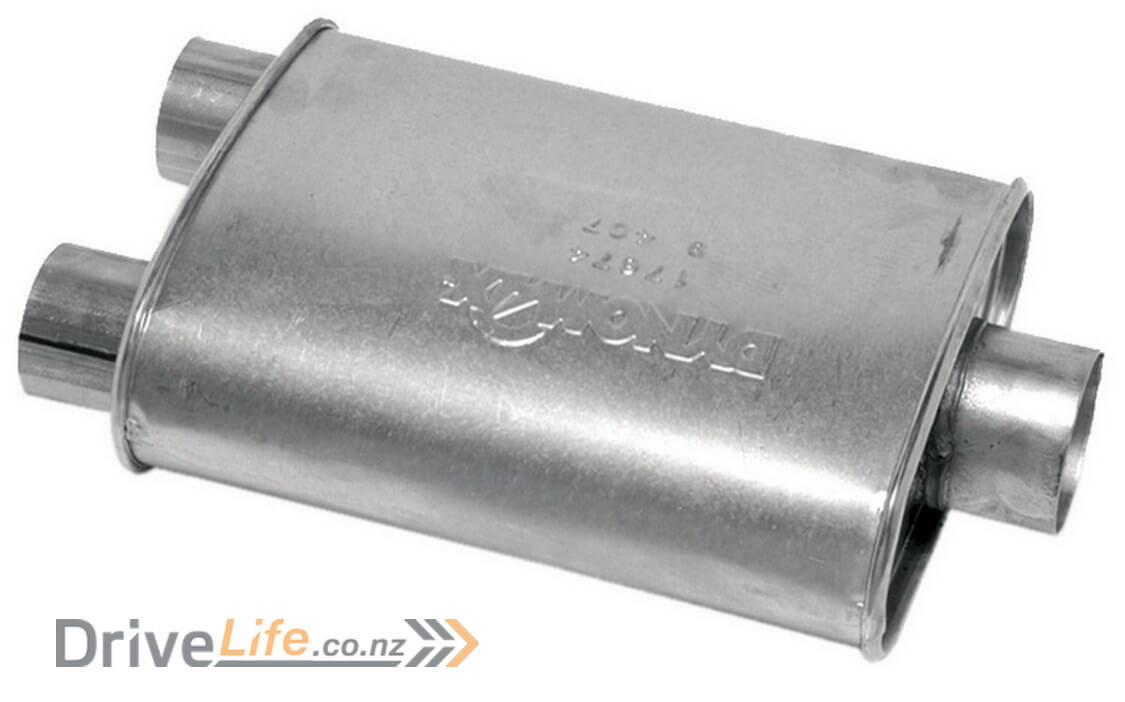 In the last episode we focused on the creation of the main exhaust manifolds / extractors for the V12.   This episode is about the middle section of the exhaust which contains the catalytic converters, flexible joints, v-band connectors and mufflers.

You may remember in the last episode, Ash from Kaizen works was helping us out with welding and fabrication so whilst Ash was working on the manifolds, I took it upon myself to try and get the rest of the system created and mounted in place so that Ash could then work his magic and join them together !   I figured now was as good a time as any.

The mufflers I actually purchased some time ago.  I wish I could sound really knowledgeable but I bought them because I liked how they looked and knew they were pretty close to what I would needed size wise.  As with everything on this car, fitting it all into the space we have was a real limitation so we couldn’t realistically use a larger muffler that you’d typically see on a “normal” car.   You will notice if you look at photos of other cars in the same class that they also have a similar issue and struggle to fit large mufflers in and need to take a different approach from the traditional.

I started by getting Mitch from O.L.S to cutout what looks like a large Audi logo.  Essentially 4 circles joined together which will hold both ends of the mufflers together so that we can get spacing right to design the main mounts.   These holders were originally going to be permanent, but we ended up replacing them later on due to space limits.   More on that later. 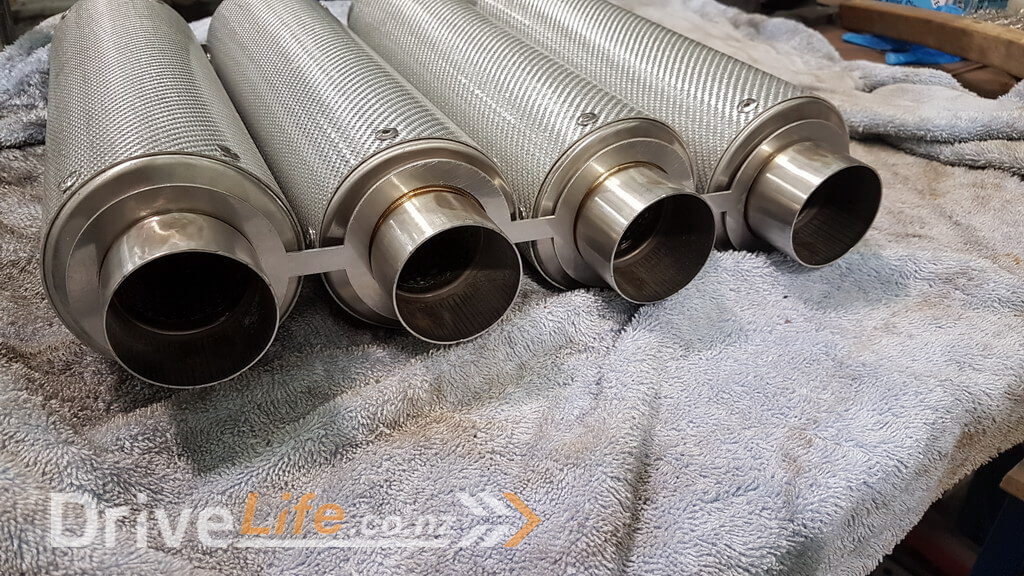 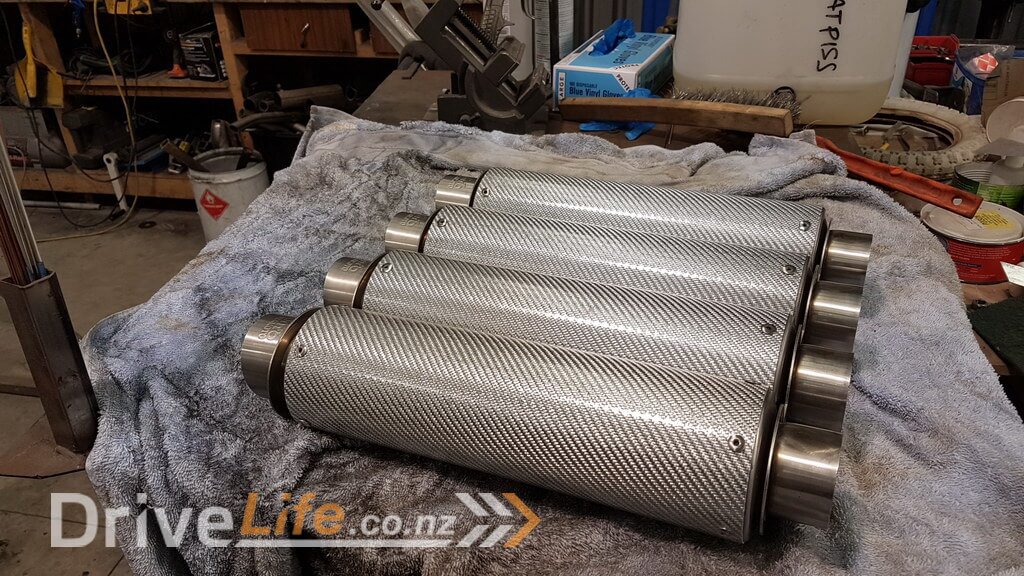 Next stage was to measure where the rear body was going to be so we could understand just how much space we had to play with.   You will see in the photos that I just used some handy steel box section to space up from the rear tyres to match the measurements I took from the body.    Obviously everything is adjustable ultimately as far as the body goes, but we have enough to do on that side of things so preferred to try and work within the limits we have rather than giving poor Zac yet more custom work to do on the body.

Next I positioned the mufflers where I knew it would give us enough room to the rear, but also leave enough room for Ash to join up to the main manifolds he’d just constructed. 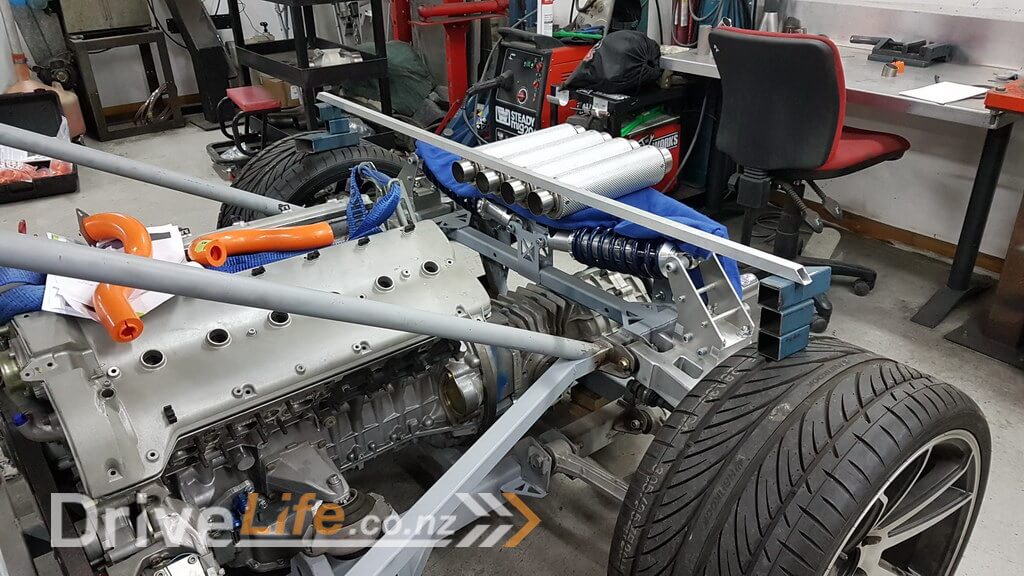 Once I had the height, width, length etc and everything was level I was able to get something drawn up on Fusion 360, printed it on paper, then went back to Ash’s workshop and realised I’d made a miscalculation so it was back to Fusion 360 for another revision which was much better. Now that I had things drawn up and they seemed to fit, I was a bit more confident to go to the next step.  Mitch cut these out of cheaper, thinner panel steel at first so we could be much more confident before we cut the final version in stainless steel.   There were basically 3 main parts, the front, the rear and also a heatshield that will sit underneath as the rear shocks are going to be very close to the bottom and we needed to protect them as much as we could from what will be constant heat.  And before someone comments……. no I’m not Jewish, it was just the design I drew up and it happened to start to look that way when I replicated it ! Next I sourced some rubber mounts in the hope that we can avoid vibration from the engine working its way to the chassis through the exhaust, and also means it will allow things to move and not put pressure on the manifold etc.   You will spot these in some of the lower photo’s.

Finally we were ready to get the final version cut by Mitch and once again he did a fantastic job. Now it’s time to assemble the mufflers into the new mount.   This is the time where I realised that with the first “Audi” shaped mount I’d made for the mufflers was going to get in the way so I had to remove the old mount (it was just tack welded in place) and then mount them into the final mount. Now, mounted onto the car so that Ash can work his magic with the catalytic converters, flexible joints and v-band connectors. 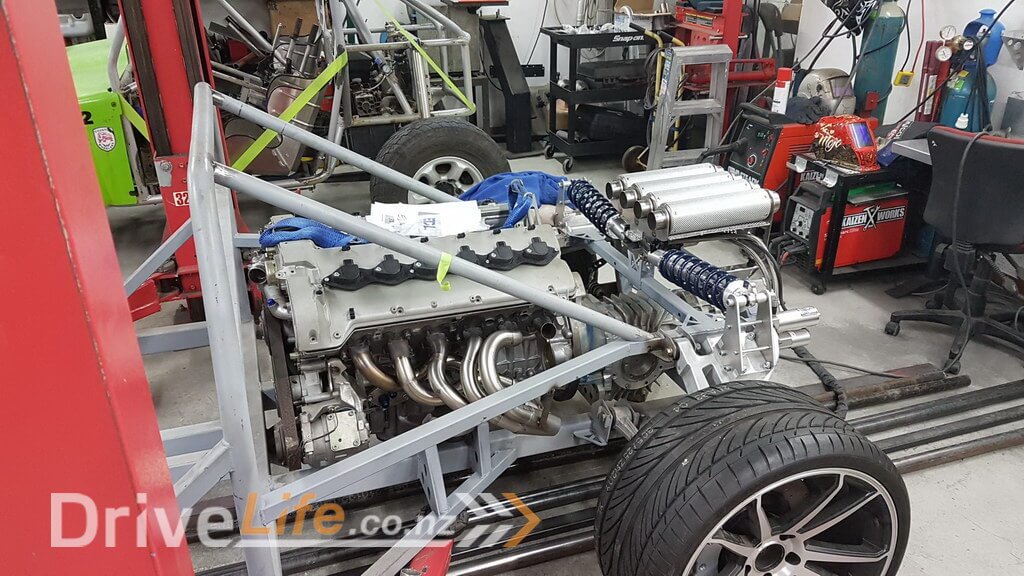 That welding though !!  Nice work Ash.   For those that also don’t know, these are the v-bands.   They are clamps that are in an inverted V shape so that when compressed from the clamp outside, the 2 parts are forced together for a tight seal.   We have placed these just after the manifolds and just before the mufflers so that the catalytic converters and flexi joiner sections can be easily removed.