This was an event I was really interested in attending. My last taste of a Chinese-built car was the Chery J11, and it didn’t turn out well. What a terrible car; badly built, slow, noisy. It had it all going.

Then John from Drive Life went to the Haval H2 and H6 launch, and said the build quality was good, and they drove reasonably well.

Haval didn’t just want to launch the new H9 – they wanted us to take the cars off-road to test them out as well. And not just soft-roading – we are talking things like the ‘The Axle Twister’ to test these cars out.

The cruncher? These tests would be done using road tyres. Bring it on! Before our drive, we had some background info on Haval, and the H9 shown to us – as well as previewing things to come for Haval.

Last year, Haval sold over one million SUVs – SUVs is all they sell. As mentioned in John’s article, they have sold more SUVs in China than anyone else for 15 years. That’s a pretty big claim to fame.

New Zealand is starting small for Haval. Last year they sold 92 cars through their 6 dealers, with the smaller H2 model being the biggest seller at 63 units. The H2 was Haval’s first 5-star ANCAP safety rating, and they will be aiming for the same for the H6 and H9. Currently those models hold 4-star ratings.

We were also shown the Chinese government’s targets for zero-emissions vehicles; by 2025, the target is 50%, and by 2030 the target is 100%. Yes you read it right – by 2030, there will be no cars sold new in China which can give out any emissions, so this includes hybrids. That’s going to change world markets, no doubt.

On the back of this, Haval is investing $5B in hybrid and EV technology to be in the games, and expect to have 30% of their Australian and New Zealand sales to be EV by 2022. That’s just 4 years away.

We were told in 2020, Haval will be launching a big ute, with a 3-tonne towing capacity, on an all-new platform and with 4×2 and 4×4 options, an 8-speed automatic and a hybrid option.

Haval is now selling cars in 33 countries, including the right-hand drive markets of South Africa, Australia and Bangladesh.

It also doesn’t have phone projection capability, so no Apple CarPlay or Android Auto. This is expected in the H2 later this year, and will flow down to the other models.

Currently the H2 has a 6-speed auto using a torque converter, while the H6 has a 7-speed (dual clutch) DCT transmission. The H2 will move to the same transmission as the H6 in 2019. The H9 comes with an 8-speed DCT auto.

We moved on the H9-specific info next. This is a full-size, seven-seat SUV, almost identical in size to the Toyota Prado, and that’s on purpose. Haval are quite blunt that it’s the Prado it has in its sights with the H9.

While the Prado has a turbo-diesel, the H9 comes with a 2-litre, turbocharged petrol engine putting out 180Kw of power and 350Nm of torque. Those are pretty reasonable numbers for a 2-litre petrol engine, and they need to be; the H9 weighs in around the same weight as the Prado, 2,230kg. The H9 engine is the same as the H6 unit, but with a higher compression to give it more power.

It’s a body-on-frame design, just like the Prado, and is full-time AWD. Haval goes to lengths to tell us that the transfer box is a Borg Warner unit, the rear locking diff is from Eaton, and the transmission is from well-respected transmission maker, ZF. The petrol engine is Haval’s own unit. There’s no diesel option, and probably won’t be. The Ultra really moves up the luxury stakes for big SUVs under $50K. It adds a heated steering wheel, electric front seats – both heated, cooled and with massaging functions. There’s an Infinity sound system, Eco-leather seating and trim, the second row of seats are heated, and you get a panoramic sunroof. The sunroof includes a rain sensor to close it automatically if it starts to rain. The Ultra comes with Adaptive Front Lighting system as well, giving you directional headlights, self-levelling and uses the fog lights as cornering lights.

That sort of pricing is going to give cars like the Kodiaq, Equinox, CX-5, Santa Fe a scare, let alone the Prado and Everest.

The trip from Palmerston North to Makoura Lodge to our off-roading location gave me a good chance to check out things like build quality inside, and NVH. I started off as passenger, which is fine by me.

Build quality was a relief! This car seems well-made, with a high level of fit and finish on the inside. First box ticked off, although there’s far too much fake wood on the inside – and it looks really fake. Road noise is well controlled, which is always easier with cars that are a ladder frame. In general NVH levels are quite low. It’s been a while since I last drove the Prado, but the H9 seems well up there. It’s a quiet ride overall.

While I wasn’t driving the car, the performance seemed more than reasonable, and gear changes very smooth. You could hear the engine working when it had to, but at cruising speeds it was nicely muted. Slowing down to 50km/h through small towns, and the engine noise all but disappeared. Plenty of room inside the H9, and I made use of the heated seats as well as the massaging function on the passenger’s seat. Would have been rude to not test it out.

One thing I noticed, even from the passenger’s seat; this is a big car, and definitely reminded me of the Prado here. An expansive bonnet out the front of the car makes it feel huge.

At last we made it to Makoura Lodge. We were given a briefing on our drive. I’ve got to say, last year I went ‘off-roading’ with another car company, and it was pretty mild stuff. Not today, we were going up 45 degree hills, down steep inclines with tree roots sticking out – and then back up them. Can I remind you this is on road tyres? I think all the motoring journalists there were keen to see just how well (or otherwise) the big and heavy H9 would go on the tracks they were describing.

Time to go. We cruised along some pretty easy tracks, just to get a feel for the cars on dirt.

We then tested the Hill Descent Control (HDC) on the H9 – a shame it’s not adjustable, and is set to 5km/h. Anyway down a steepish hill we went, with little drama, and then back up again.

At the top we stopped next to ‘The Axle Twister’, a short course that really tests out axle articulation. You can see by the photos that the H9s coped extremely well. No one got stuck, not even when only two opposing wheels were left touching the ground. The automatic systems took over, and made everything simple. Our guide took his own Landcruiser V8 on the same course, and while he didn’t get stuck anywhere, he did have to have two goes at a certain point where he had no traction. Points to Haval on that one.

Next up was a serious downhill descent, with huge tree roots sticking out, then downhill over some wicked looking boulders. It was HDC on for this one – again, a shame it wasn’t adjustable as 5km/h was too fast, and most cars had a few bad noises on the way down. Still, we all got down to the bottom – now it was time to get back up again. I think most drivers just left the AWD system in ‘Auto’. We could have selected 4L or some other setting, but really, the automatic systems is that good it does all the work anyway.

The issue with this hill was the big tree root sticking out right across the track at the top (of course) of the hill. I had to fang it a bit to get up and over that root, but we all did it. On road tyres – quite incredible.

Once everyone had had a go, we then cruised along some more farm tracks to the base of a grey mud slick hill. This time it was another test of HDC – coming down this muddy slope. Believe me, it’s a lot worse than it looks in the photos. We circled around the hill, then HDC on and feet off the pedals. Again there was no drama, the H6’s ABS systems taking control and getting us all safely down the mud.

Next up was ‘stony hill’. One of our guides was at the top of the hill with a hose, wetting it down to make it nice a slippery. Drivers lined up at the base, and while you couldn’t get up this hill from the base of it, a 20-foot run up was all that was needed to get up it. And we are talking huge, smooth boulders and cars with road tyres that have tread that’s filled with mud from the muddy hill.

Bloody impressive is all I can say.

It was time to go again, and down some more tracks we went until we got to a pretty decent stream. Each driver had some fun wading through the river. The H9 has a wading depth of 750mm, so this was a doddle.

The day was over, except for the long drive back to Palmerston North. My turn this time, and I was keen to see how the H9 would go on the open road, with gravel roads on the way out, some tight bends and then flat, straight roads.

On gravel, the weight lets itself be known. It’s not a handful, but you do need to be aware of that 2.2 tonne you are pushing around on the gravel. The full-time AWD helps of course.

Off the gravel and onto tight country roads, there’s more body roll than I’d like, but you get that with a ladder-frame chassis and all that weight. I had two passengers with me, so took it relatively slowly. I would have liked to have pushed the H9 a bit harder to see how it went, but that’s for another day.

Onto the drive on main roads, back to the hotel. The H9 accelerates well, but for 350Nm of torque, that weight blunts the acceleration some. It’s still more than acceptable though, especially for the price of the car. That transmission is a beauty; smooth, smooth, smooth. I couldn’t be more happy it isn’t a CVT.

On leaving the H9, I noticed one thing that Haval pointed out; the doors close with a solid thunk. Some people look for that in a car. The H9 does this, and on a first drive, so much more. This seems to be an extremely capable off-road luxury SUV at a great price.

It may be an overused word, but for me, the H9 is a game changer. A full review where we spend much more time with the car will be the real test. 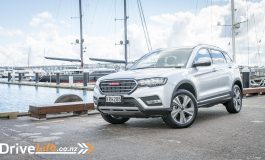