It’s a busy time of year for the DriveLife team, and we need to be choosy about what events or new car launches we go to, otherwise it’s all events and nothing else.

But then when Holden suggested we drive coast to coast in the South Island, basically racing the sun across the country, well who could say no? This event was originally set to run during the Equinox in March, however the massacre in Christchurch meant the event was moved forward to coincide with the Winter Solstice.

So we wouldn’t be driving during the Equinox in an Equinox, but it would still be a fun trip regardless. I’m always up for any driving on those fantastic South Island roads.

We’d be joined by a contingent of Australian journalists as well, many of them had never been to the South Island, so this time of year was really going to show off all the South Island has to offer – at least on the route we’d be taking.

First day of the event, and we headed up to the hills of Sumner to see the sun rise. I’m happy to say at this time of year, that was 8.09, so it wasn’t a killer of a start to the day. Sunrise over, it was down for breakfast, and then kick off with the first stage of driving. At the end of the day, we’d be in Punakaiki to see the sun setting on the West Coast.

In the motel car park, 7 new Equinoxes were lined up for us, two to a car. All were 2-litre petrol-turbo models, and all were the top-spec LTZ-V.

I jumped in the driver’s seat and starting getting familiar with the Equinox, it’d been a while since I did our last review of one. Built in Mexico, I was reminded just what great value the Equinox is in LTZ-V spec. The driver gets a heated steering wheel, there’s heated and ventilated front seats – and so are the rears. Yes, the second row passengers also get heating and ventilation. There’s no other models – SUV or otherwise – in this price bracket ($57,490) that has heated and ventilated rear seats, that I can think of.

We hit the road and headed north, with a planned route of heading over the Lewis Pass, then tomorrow returning via Arthur’s Pass. With lots of grit on the road, ice was a constant thought on my mind, and I made sure the Equinox was running in AWD mode. Did not want any crashes or near crashes from hitting the ice.

With the temperature sitting between 1 and 3 degrees on the Lewis Pass, it was freaking cold outside. For lunch, we stopped at Maruia Springs Thermal Resort, the ground slippery with ice. It’s a stunning place, with thermal springs supplying hot water for a natural spa experience. All (especially the Aussies – can’t handle the cold apparently), huddled around the fireplace.

Fed and warmer, we headed back out to on the road, driving towards the junction where we’d head south.

We arrived at Punakaiki, and I headed off to find a photo location to get a shot of the sun going down on the Equinox. But, the clouds didn’t agree with my plan, which was a bummer. Still, the sun did go down and we’d done the coast to coast drive in a day via the long route, and beaten the sun comfortably driving via the Lewis Pass.

Sunset on the beach in Punakaiki

The new day dawned and it was time to head back to Christchurch to catch flights, but this time we’d be heading across via Arthur’s Pass. I love this road. When I lived in Christchurch, I often headed across to Westport to visit friends, and in those years, there was a lot less traffic on the road. In saying that, for this time of year traffic was minimal on both Passes, and Arthur’s Pass was like a ghost road at times. After taking it easy the day before on the icy Lewis Pass, I was able to give the Equinox a better run today, and it reminded me just how good it is on the open road. That 2-litre turbo motor pumps our 188kW and 353Nm of torque, and goes extremely well. It pulls like a trooper, is smooth and quiet. I’d still prefer the diesel, but this engine is a cracker. It runs out of puff at bit at the top end – where the new Mazda CX-5 Takami would still be pulling strong – but all in all, it’s a great engine.

And then there’s the handling. I’ll put my hand up now and say the Equinox handles just about as well as the CX-5, which has been the benchmark in medium SUV handling for a while now. It’s got a bit more body roll than the CX-5, but grip and steering feel are right up there. This is an SUV you can chuck about on roads like this, if you want to. The ride too is excellent – absolutely no complaints there. That’s not to say most SUVs don’t ride very well, as many do, but the quality of ride is one of the Equinox’s strengths.

All too soon we were back in Christchurch, and it was time to park seven Equinoxes up, and head home.

Would I do the same thing again, in an Equinox? Totally. It does nearly everything well, and is a great driver’s car to boot. You can’t ask for much more than that. 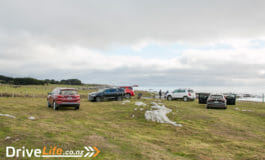 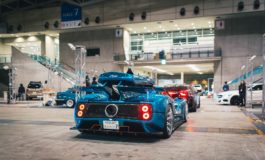 GALLERY: Behind the Scenes at Tokyo Auto Salon