In a market already filled with niche products for every buyer in the market, it was hard to think there was anything else to offer. I was wrong, there was a gap and Mercedes-Benz saw it too, which has resulted in the A-Class sedan.

Why would we need more sedans? well there are a few reasons that Mercedes-Benz thinks there is a need for this body variant. The A-Class hatch was 2018’s best selling luxury small car, and the CLA is 2018’s second-best luxury sedan. Who took the number one slot, Mercedes-Benz was with the C-Class was the best selling luxury sedan for 2015, 2016, 2017 and 2018. So it’s fair to say that they know a thing or two about sedans and what the customers are after. They are also pretty confident that the new A-Class sedan will be another big seller for them. So what’s different about the A-Class sedan when compared to the A-Class hatch? Apart from the obvious rear end change, there is not much difference. The overall size is a bit longer, and the rear doors have a larger opening making it easier to get in and out. The boot opening space has been altered too, splitting the rear lights so that the boot has a larger square opening over the  hatch. The boot is also large at 420 litres compared to the 390 in the hatch. With all of the exterior change over the Hatch the new A-Class sedan has now claimed the title as the world’s most aerodynamic sedan, previously held by the CLA. Inside it’s much the same too, with very little visible change. The main focus is still the level of tech that the A-Class hatch comes with. The twin widescreen digital MBUX cockpit takes centre stage, offering a raft of features that’s unseen in this market range. The MBUX is a learning AI that can learn your behaviour, offering suggestions and setting that are used in repeated patterns. If you put the radio on when you go to work but leave it off on the way home, it will remember it and set it up automatically. Keyless Go is also available for the sedan only, not currently available for the hatch. New to the A-Class sedan is Energising Comfort Control. This system is aimed at helping the driver relax and unwind while driving, and is also compatible with Garmin watch link. When used with the watch the vehicle can monitor your heart rate and offer suggestions to relax your mood. The A180 comes standard with the following features: Enough specs, what’s the new A-Class sedan like? Well, first impressions are good, it’s a pretty smart looking vehicle. The added boot makes the sedan look and feels like a much bigger vehicle when it’s really not. I like it and would not have picked it was an A-Class, as it looks more grown up and pretty similar to its bigger brother the C-Class.

We drove the A200 over the course of the day, and what I got for our short time behind the wheel was that its a pretty capable little car. It felt much like the normal A-Class hatch, but for some reason felt a bit bigger. Some of this might have been down to the large glass panoramic roof, which is a must-have option.

The drive was a good mix of motorway and backcountry roads, which means we can test its ability to cruise and how it handles in the corners. The open motorway was taken in its stride, light and easy steering, with good power and low engine noise when cruising at 100km/h. I am a tall guy, but even so, I found the A200 comfy to drive. Not sure it would be great for tall people like me on longer trips, but the trip today was good.

Once we got off the highway it was time for some back roads. The 1.3-litre engine was pretty good, it’s not fast but it’s not trying to be a fast car. The light engine helped to make the overall vehicle weight feel lighter and easy to control in the corners. I need more time to fully test it, but first impressions were positive.

The rear legroom did suffer a bit from the two tall occupants, no one taller than 6ft would have been able to get in the back, or get that comfy. No real difference to the hatch here.

We are looking forward to having a bit more time in the new A-Class sedan so that we can give it a depth full review. 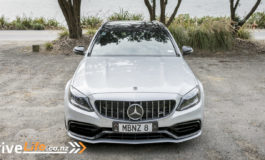