The Q2 is Audi’s crossover SUV, which I reviewed a couple of years ago and said it was good, but not great. Now Audi have given it the S treatment, adding more luxury, more toys, and of course more power. Would the SQ2 improve my opinion of Audi’s smallest SUV? I drove one for a weekend to find out.

First Impressions
When I collected the SQ2 from the local Audi dealer there were a few Q2s around, and I thought to myself, “Please let it be the blue one!” Once I got closer and spotted the quad exhausts I realised it was indeed the blue one. The Ara Blue Crystal paint really suits the car, showing off its lines and creases nicely, and it really sparkles in the sunlight.

Add to that the 19” wheels – which look bigger and hiding red brake calipers, Quattro side decals and black RS grille and the complete package works really well. It’s smart but understated, as an Audi should be.

Open the door and you’re met with quite a lot of grey – grey leather, grey carpet, grey headliner. There’s contrasting silver stitching on the seats, silver inserts and some other details to lift things a little. Brighter details can be optioned for the seats but they might be a little too in-your-face for the discerning Audi buyer. The seats, surprisingly in an $80k car, are manually adjusted on both sides. They’re very comfortable, with good-sized side bolsters to hold you in place when you’re making progress down that twisty country road.

The flat-bottomed steering wheel is trimmed in perforated leather on the sides where you hold it, and is chunky enough that it’s satisfying to hold. There are thumb buttons on the face for stereo and phone controls. Cruise control is operated with a third stalk at about 8 o’clock. Not something I’m a big fan of, I’d rather have buttons, but it’s easy to use without looking down, once you get the hang of it. The main driver’s display is Audi’s excellent fully digital system. It’s bright, clear and easy to use in all lights. The default display is a big central rev counter with digital speedo in the centre ,and other information to each side. This can be configured to various displays including a full-screen satnav map, which does look really cool. There’s no HUD as standard, it’s optional on the SQ2, which is a little disappointing.

In the centre of the dash is a big, widescreen main screen. Audi have gone for the tacked-on look rather than integrating it into the main dash, but it looks okay and I soon stopped noticing it. It’s a touch-screen but can also be operated using the click/jog wheel behind the gear shifter. One nice feature of the wheel is that it’s also a touch pad so when entering a destination for the sat nav you can write each letter on the top instead of having to select them on screen.

The screen resolution is very good, and it’s nice and clear for the reversing camera display, which has moving lines and lots of useful little aids to help you park. The controls on the dash are well laid out, not too many buttons, and a couple of knobs for the dual-zone climate. Lower down the centre console you get USB and power sockets and a wireless Qi phone charger.

The stereo is excellent, with great bass and clear sound. I’m happy to report that Bluetooth pairing went smoothly and it re-connects quickly and automatically each time.

The rear seats are 60/40 split folding, and are comfortable. Leg room is good for a car this size – not huge but enough that adults won’t feel too cramped. Rear seat passengers get a power socket and two USBs.

Open the electric tailgate and you’ll find a good-sized 355-litre boot. There are tie-down loops, bag hooks in the sides and a little net to one side. A luggage net is also included. Under the boot floor you get a space saver spare with a subwoofer mounted in its centre.

The big question is, can Audi take a solid but unexciting crossover SUV and turn it into a driver’s car? It certainly looks the part. Press the start button by the gear shifter and you get a lovely growl as it fires up. The noise is much more subtle once you’re on the move, as you’d expect with a modern sporty Audi, you don’t want to drive around making shouty noises all the time.

The 2-litre petrol-turbo engine makes an impressive 221kW, or 300bhp in old money, and 400Nm of torque. Combining that power with the quattro all-wheel-drive system means you can launch the car to 100kph in 4.8 seconds with no drama at all. It certainly is grin-inducing, and the S-tronic dual-clutch transmission is so fast and smooth that you can barely feel the shifts. Despite being a relatively small capacity turbo engine, you get an almost constant surge of acceleration all the way to the speed limit.

In normal driving, and in traffic, the SQ2 is much like the normal Q2 – civilised, comfortable, smooth, with great visibility. The (optional) smart cruise control works well and makes cruising in stop/start traffic a much more relaxing experience. Why it’s not standard on an $80k+ car I don’t know – but I was glad to have it in our review car. The ride is firm, but not harsh over bumps. Audi have done a great job of tuning the dampers to make them pliant enough to feel really smooth on normal New Zealand roads.

Once you’re out of the traffic and get the chance to put your foot down a little, the SQ2 really starts to shine. Because it rides nicely and with the smooth, constant power delivery, it’s deceptively quick. You really do have to watch the speedo carefully, which is why a standard HUD would be a great addition. It handles really well too, to the point where you can easily forget that this is a (relatively) tall SUV. That combination of comfort and handling is impressive on non-adaptive dampers.

I covered a few hundred kms in the SQ2 with a pretty good combination of commuting, shorter trips and a few longer ones, and averaged 10.1l/100km. A bit above Audi’s claimed figure of 7.2, but not unreasonable considering the power on offer and the rather addictive acceleration which I may have taken advantage of a few times.

The whole package is fairly typical Audi S – it’s fast, handles well, comfortable, relatively luxurious, and feels like it will eat up any road you point it at. But is it a driver’s car? I’m not so sure. It’s a great daily driver, the acceleration and handling are smooth and satisfying, but it didn’t make me grin as much as I might have liked. But I think that’s exactly what this car’s target market want. Understated speed and competence. And it does that very well.

It has enough space for the shopping and the kids, some great safety and usability technology, it looks good on the school run, and on the way home you can take the long way and demolish some back roads. It’s a great all-rounder and if it had just a few more features I think it’d be really good value.

To answer my question above – yes it has changed my opinion of the Q2 for the better and it’s a certainly a car I’d consider very seriously. 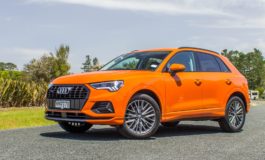