A few months ago Fred got to spend time behind the wheel of the Mercedes-Benz GLE 300d. With little to dislike about it, Fred gave it top marks, 5 chevrons. Not long after, I was booked in to review the GLE 400d. I was keen to see if the 400d would rate as well and if the $10,000 difference is worth it?

The Range
The Mercedes-Benz GLE SUV comes with two shape variants. Your more typical SUV with a square rear end, and the Coupe – sloped or fastback model. They designate the difference by GLE SUV, and the sloped back is the GLC Coupe. For this review we will be looking at the GLE SUV.

There’s a huge amount of different options to up-spec your GLE 400d, for the full list head over to the Mercedes-Benz New Zealand website, to check them all out. WEBSITE LINK

First Impressions
Fred got the 300d in black and I got the 400d in white. I was really glad that it didn’t come in black as I personally don’t think it’s a great colour for its shape. The design needs more contrasting colours, and I think white is just perfect. This 400d came with the optional Night Package, which removes all chrome trim, replacing it with gloss or matte black options, making it look fresh and modern. The aggressive front bumper completes the overall look, giving this GLE 400d a point of difference, making it something you want to drive.

The Inside
I really feel Mercedes-Benz have stepped up the game with the new GLE. Once inside, it’s reminiscent of older models, but it’s all new, modern and luxurious. Greeted with my favourite black open-pore oak wood grain on the doors, dash and centre console. There are new grab handles on the centre console, quite big and chunky ones too. Like Fred I thought they were a bit off, but found them to be a perfect spot for your leg or hand to rest against, as well as being a grab handle. On every leather surface there is a lot of finely finished stitching, making the cabin feel very upmarket and handmade.

The new central display and dash is beautiful. At last Mercedes-Benz has listened to our complaining about the afterthought display of older models. This is very stylishly incorporated into the dash with purpose. It’s not so easy to use with the new centre console touch pad, which was the only area littered with buttons in the cabin. Overall it had a nice clutter-free feel.

One thing I do like about a lot of the Mercedes-Benz SUV’s, they cabin noise level is always low. However this GLE 400d was very quiet, how they managed to make that new diesel engine barely noticeable I will never know. Whatever they did, it has resulted in a tranquil cabin space during daily use.

Rear legroom is amazing; I sat in behind my own driving position and there was at least 6 inches between my knees and the driver’s seat. There are not many vehicles that the rear seats feel as good or well equipped as the front. Both rear seats had a full range of electric seat controls on the doors. “Wow” I hear you say, well sort of. Wow if you don’t have kids, and the person who designed it does not have any. These buttons may as well have been made out of candy, my daughter was able to touch them with her feet from her front-facing child seat. Every time she was in the car was a drama, trying to find ways for her to leave the buttons alone. I could not find any way to disable them. I think this is a bit of an oversight in the design.

The boot is good at 630 litres, unless you have the third row up which brings it down to 170 litres. The only issue I had with the boot was the door itself. Actually I didn’t have the issue, it was a friend of mine; she is 175cm tall and when the boot hatch was open, she couldn’t reach the buttons to close it. Hopefully there are options somewhere deep in the menus to reduce the opening height.

If you are interested to hear what Fred thought about the interior of the 300d, follow this link. 2019 Mercedes-Benz GLE300d – Car Review – black diamond.

The Drive
I had no idea what to expect when I picked up the GLE400d, only that Fred was disappointed he ‘only’ got to test the 300d. Who could blame him; the 243kW, 700Nm six-cylinder 400d does sound like an amazing engine. Just like the 300d, the 400d had one quiet diesel engine, several people thought it was petrol due to the lack of noise. This engine was amazing, it was so powerful and smooth, delivering power through the 9-speed gearbox with ease. Even though the 400d weighs over 2 tons, you wouldn’t think it from how little the engine had to work.

Daily driving the 400d was no chore, in fact it was something I looked forward to. When everything works well together, the engine, drivetrain, driver controls and seats, it feels just right. Where I thought a control should be, there it was, the seats where the right level of comfort for my size and shape, and the engine and gearbox both jumped into life whenever it was asked.

I covered around 800km in the week I had the 400d. This was about 60/40 split of city and motorway driving. Several trips in and out of Wellington to collect some things, and a lot of driving our local neighbourhoods doing the daily daycare drop off, errands and daycare collections. No matter how long I spent inside, it never took its toll. Beside those rear door seat controls it was hard to find much that I did not like about this SUV.

When I took the 400d down some back roads to test its handling, I found it to be more inline with a car than an SUV. The suspension was stiff enough that it stopped the large body roll you normally get in an SUV. But it also travelled enough to tackle twists and turns at speed. Even though my Land Rover Discovery has about the same power, it’s very top heavy and a bit like a boat when compared to this GLE.

I have always loved the adaptive cruise control that Mercedes-Benz offer, one of the best. Now the GPS-tracking side of things has filtered down from the S Class to SUV’s. This means that as you approach a corner and are using adaptive cruise control, the car will slow down to ensure a safe speed as you drive around it.

Fred and I both loved the new HUD, it was a great size, sharp and informative. We are seeing more and more information being moved from the dash over to these larger HUD displays. This is great, as it means you don’t have to look down at the dash as much and your eyes are always looking ahead.

I agreed with Fred around the placement of the suspension height adjustment controls, right there behind the touchpad’s wrist rest. For one, I cant see why you would be worried about adjusting the height of the suspension, as it’s not a hardcore offroader. I could see the point to having the adjustment or the placement of the button. Maybe it’s there so you can feel confident when climbing curbs.

Mercedes-Benz advertise the 400d should return 7.7 litres per 100km of diesel. With my week long mix of city and motorway driving, I didn’t get near that, ending up with a figure of 10.7L/100km. This was not bad overall, as it’s a big heavy vehicle, but it’s not far off the 10.9 that I get from my daily SUV, a 2015 Land Rover Discovery SDV6.

Overall the 400d is hitting a lot of solid homeruns, which left me disappointed to drop it back. Once back into my Land Rover I must admit it felt a bit agricultural after the week in the 400d GLE.

If you are interested to hear what Fred thought about the drive in the 300d, follow this link. 2019 Mercedes-Benz GLE300d – Car Review – black diamond.

The luxury diesel SUV range appears to be shrinking, even though they provide a better tow vehicle and are more fuel efficient than many petrol equivalent models. Diesels are also not as noisy as they used to be, some you can barely even notice the difference in sound from a petrol model. 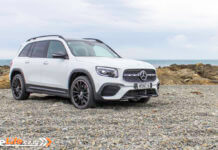