When the Lexus RC F first burst on to the stage with its thumping old-school 5-litre V8 as a Japanese alternative to the likes of the BMW M4, Mercedes-AMG C63 Coupe, and Audi RS5 it was always seen as a left-field choice. Reviewers said it was a bit of a blunt compared to its Teutonic rivals with its weight being the biggest hinderance.

In late 2018 Lexus gave the RC F a mid-life refresh with sharper and more modern styling. The refresh also brought with it a new variant in 2019 – the Track Pack. Basically carrying on from the Carbon Edition, the Track Pack adds more carbon fibre goodness such as a fixed rear wing, a new front splitter, and lighter wheels. The Track Pack in total sheds 80kgs from the RC F’s 1770kg curb weight, now weighing in at 1690kg.

First and foremost, that wonderful engine. Lexus have basically milked the crap out of this near-Prehistoric engine. It can trace its roots back to the IS F from 2008 and has been used in a variety of other Lexus models such as the GS F and LC500. Not that there’s anything wrong with that because this is one of the most charismatic engines on sale right now. When the RC F was first launched two of its rivals also had monstrous NA V8s (the C63 and RS5). However, since then newer generations of those cars have come and gone are the natural V8s and instead forced induction V8s and V6s have taken their place. The RC F has stubbornly kept its old-school powerplant and it’s all the more charming for it.

2. It’s Got Some Of The Best Carbon Ceramic Brakes

As part of the Track Pack the RC F got upgraded carbine ceramic brakes courtesy of Brembo. On most road cars I don’t see the need for carbon ceramic brakes as they’re had to get used to in day-to-day driving. They’re sensitive, squeaky, and usually an expensive optional extra. With this being a Lexus, they were perfect and standard. There was never any loud or annoying squeaking, even when cold, and weren’t overly sensitive around town. When the going got fast they were responsive and effective. Can’t really ask much more than that.

3. These Have To Be The Most Comfortable Sports Seats

While it may look like a racy track car, the RC F still stays true to its Lexus roots. The front seats were some of the most comfortable, if not THE most comfortable sports seats in the business. What’s even better is they’re fully electric, heated and cooled, plus a great mix of leather and alcantara all the while providing support around corners.

4. The Grip From Those Michelin PS4s

You’d think a rear-wheel drive coupe with 480hp would be a bit lairy when trying to put down its power on to the road but the Michelin Pilot Sport 4 rubber did the job brilliantly. These tyres can take a beating and still have plenty more to give. They’ll also do mad smokies when required.

The styling may not be to everyone’s taste but I think it gives the RC F a a needed aggression boost. The carbon fibre add-ons to the Track Pack may seem a bit ‘Fast and Furious’ but it also reminds me a bit of the RC-based Super GT/Super Taikyu racers. It’s also so uncharacteristically Lexus it is pretty amazing.

Yes, Lexus the brand known for posh hybrid sedans and SUVs have one of the thirstiest V8 coupes on the market. On a good run I was managing 14L/100km. It’s not the end of the world but it’s unapologetically old-school with no cylinder de-activation tech or even stop/start. Personally I loved it even more for that but there is a price to pay and that price is having to make regular stops to petrol stations.

There’s no escaping the fact the RC is a 6 year old car. The tech inside looks like it’s from 6 years ago. Despite the update in 2018 much of the interior remains unchanged. The infotainment is still controlled via a trackpad in the centre console and while Apple CarPlay is now available as an option, it wasn’t ticked on my press car which meant I had to rely on the car’s factory navigation system which looks like it came from a 90s Nintendo game.

Despite it being called the ‘Track Pack’ let’s not kid ourselves here. This isn’t a Porsche GT3 rival by any means. It’s simply a RC F that’s gone to the gym a couple times and got some new sportswear. Losing 80kg is respectable but when you’re starting from near 1800kg there’s still a long way to go. It still feels cumbersome when pushed around corners. It’s still far more comfortable cruising to the race track than actually driving on it.

Stop with this trend please. Especially on a car that has so much carbon fibre on the exterior, opening up the bonnet to show off that glorious engine only to be met with a plasticky faux-carbon engine cover is quite a disappointment. 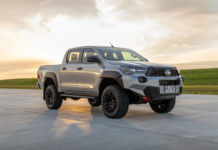