Back in 2017 I reviewed the Mitsubishi Pajero Sport XLS and loved it. I gave it a 5 chevron review as it was well rounded vehicle that gave you a lot of bang for your buck. It’s now 2020 and we have the latest Pajero Sport VRX to review and see how it stacks up to the previous model.

It’s easy to mix up the two Pajeros available in New Zealand. There is the standard large Pajero and the Sport. Both have the same name, however the Sport is not a variant of the Pajero, it’s a different model altogether. A tad confusing I know.

The Sport is the funky young and hip version of what the normal Pajero would like to be, with a more streamlined look. When we reviewed the Pajero Sport in 2017 the price difference between the two models was significant; times have changed and this difference is now down to $1000.

Would this now affect decisions made on the Pajero Sport when the larger Pajero is not much more?

The VRX has all of the above and is available in a range of colours, Pitch Black, Sterling Silver, White Diamond, Midnight Blue, Redwood, Deep Bronze and Graphite Grey. Our review vehicle was Deep Bronze, or as a Google phone colour choice, kinda brown. Mitsubishi also offers a wide range of extra features to personalise your Pajero Sport. These include: weather shields, roof racks, rear air dam, front air dam, cargo liner, side step garnish, scuff plate, carpet mats and fender flares.

I was looking forward to my time in the Pajero Sport, as I had really enjoyed the experience in the previous XLS. I was curious to know what had changed and if it would still tick all the boxes for me. Upon first glance, one box didn’t get ticked, the colour selection. Thankfully when buying you get to pick the one you want, not always the luxury we have when reviewing vehicles.

On the face of it, it doesn’t feel like much has changed when I think about the previous model. But when you have them side by side, you can see the evolution. The previous model’s lines were softer overall, now replaced with a sharper, stronger look. The front has squared up with a larger front grille and cleaner lines ending with the sleek LED headlights. The rear has seen similar changes, now with only the VRX the spoiler is standard and the rear hatch is recessed into the body unlike its predecessor.

Overall these resulting changes make it feel the same but in fact it’s rather different.

I’ll be honest and say I could not tell the difference with the new interior from memory. But once I looked back at the photos from the previous review, they were both very similar with some differences. The only real differences are the central console, media display and seats. Everything else is the same or at least the same shape and feel. This is not a bad thing, as the Pajero is a well put together unit. All the surfaces are hard plastic or tough material so that they can endure the rougher times when getting in and out when off the beaten track

The seats in the VRX are now leather, which was a bit of a surprise. I know the VRX is the top and only spec. But the Pajero Sport is a hard worker and always ready for a bit of fun and and offroad adventure. Leather seats are almost too nice for something you might jump in and out of, wet, muddy or dirty. The previous model had cloth seats, which I loved. Now with leather seats, does this affect the useability of it, would you become too precious about them? Can’t throw your tools or dirty overalls in the back seat and what about kids? It’s something to think about, something I am not sure that needed to change. I also did not find the leather seats as comfy as I remember the cloth seats from the previous model

The other thing I noticed getting in and out of the Pajero Sport, is that the roof was very close to my head and I had to duck just a bit to get under the A-pillar. Something I had not noticed before. As my normal daily SUV is a Land Rover Discovery 4, the space around my head was noticeably different in the Pajero

The dash has seen big changes too, from the standard dials either side with a small LCD screen in between to a large fully digital LCD dash. This made the experience feel more modern, as you also had the ability to change from speed to rev, focusing on what info the driver wants to display.

The central media system has been simplified since the previous model. It looks less like an iPhone in the dash and more like a regular touch screen. The screen is bigger however it feels older, as all the icons are grey or light blue, feeling outdated. The previous model’s display had more colour for all of the buttons. The menu is very simple: MultiMedia, Phone, Settings, Info and Apps. The functionality is pretty straight forward, doing what it says within each app without much drama or fuss.

The boot has not changed much from the previous model and was still a bit disappointing. Once you started to use that third row, say goodbye to that boot space. If the third row is down, then it’s okay –  you have a good SUV-sized boot of 502 litres. But if you need that third row, this gets reduced to 131 litres, which is not great. When both the third and second row are down – which was super easy to do, the boot becomes a massive 1488-litre cave. Overall it’s good, but if you need seven seats, you might need a roof box too.

There is not much to cover when it comes to driving the VRX. It’s easy and smooth to use, It’s a big truck and If anything you feel as confident driving it, feeling safe tucked inside. Great all-round visibility, big mirrors, and a nice solid platform.

The noise from the engine was the only thing that was not as expected. Everything else handled itself as it should for a high-spec 7-seater off-road SUV. Even when I did my normal set of road tests, this chassis handled well, no unexpected body roll, which always left the driver feeling in control of this big vehicle.

Performance from the 2.4-litre turbo-diesel engine was impressive. The Pajero Sport did not hang around when you wanted to get going. That’s thanks to the 135kW of power and 437Nm of torque made available to you. It was nice to have that torque ready and waiting, which would not just get you up and over off-road obstacles, but handle itself when towing too.

We didn’t get the chance to drive the Pajero in serious off-road conditions. I can only imagine that it would handle most things in its stride. The super select 4WD made it easy to go between two-wheel drive and four-wheel drive. Then if you wanted more you could go to 4 high and 4 low for more adventurous driving. The ground clearance is 218mm, combined with a 30 degree approach and 24 degree departure angle.

Unlike the XLS, the VRX comes standard with a tow bar, giving you a 750Kg unbraked and 3,100Kg braked towing capability.

There are a lot of SUV’s available in the New Zealand market these days, but with actual off-road capability the list of competitors becomes a bit smaller. 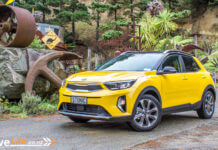 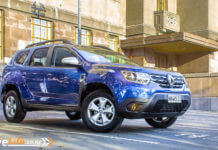