A couple of weeks after first experiencing the CX-8 in Queenstown, Mazda SkyActiv Vehicle Dynamics – A day at the Snow Farm,  I was able to spend a week behind the wheel to see what everyday life is like with the new CX-8.

The CX-8 is available in two drivetrains and trim levels; there is one FWD (Front Wheel Drive and two AWD (All Wheel Drive) variants. The GSX is available in both FWD and AWD and Limited is only available in AWD. All variants come as diesel only, using the same engine across the range. The CX-8 FWD GSX starts from $53,495, the CX-8 AWD GSX from $55,995 and the CX-8 AWD from $62,495.

All models use the same 2.2-litre in-line 4-cylinder 16-valve DOHC intercooled twin-turbo diesel engine with SKYACTIV-D and i-stop. This engine creates 140kW of power and 450Nm of torque. All variants come with a 6-speed auto (SKYACTIV-Drive) transmission and G-Vectoring Control (GVC) technology.

At first glance I was not sure if the SUV I was looking at was the CX-5 or CX-8. They look so similar, which is not a bad thing, as the CX-5 is a great looking SUV. This was bigger – no it’s actually longer, which allows room to accommodate the third row of seats. I was impressed by the quality of the paint; it was black, but it had a level of depth that glistened in the sun. The CX-8 looks great, and right at that moment I could see why they made it. Many who see the CX-9 are unsure about it size, while the CX-5 is easier to deal with in the city. Offering what is a long wheel-base version of the CX-5 is a no brainer, 7 seats without the scale of the bigger CX-9. 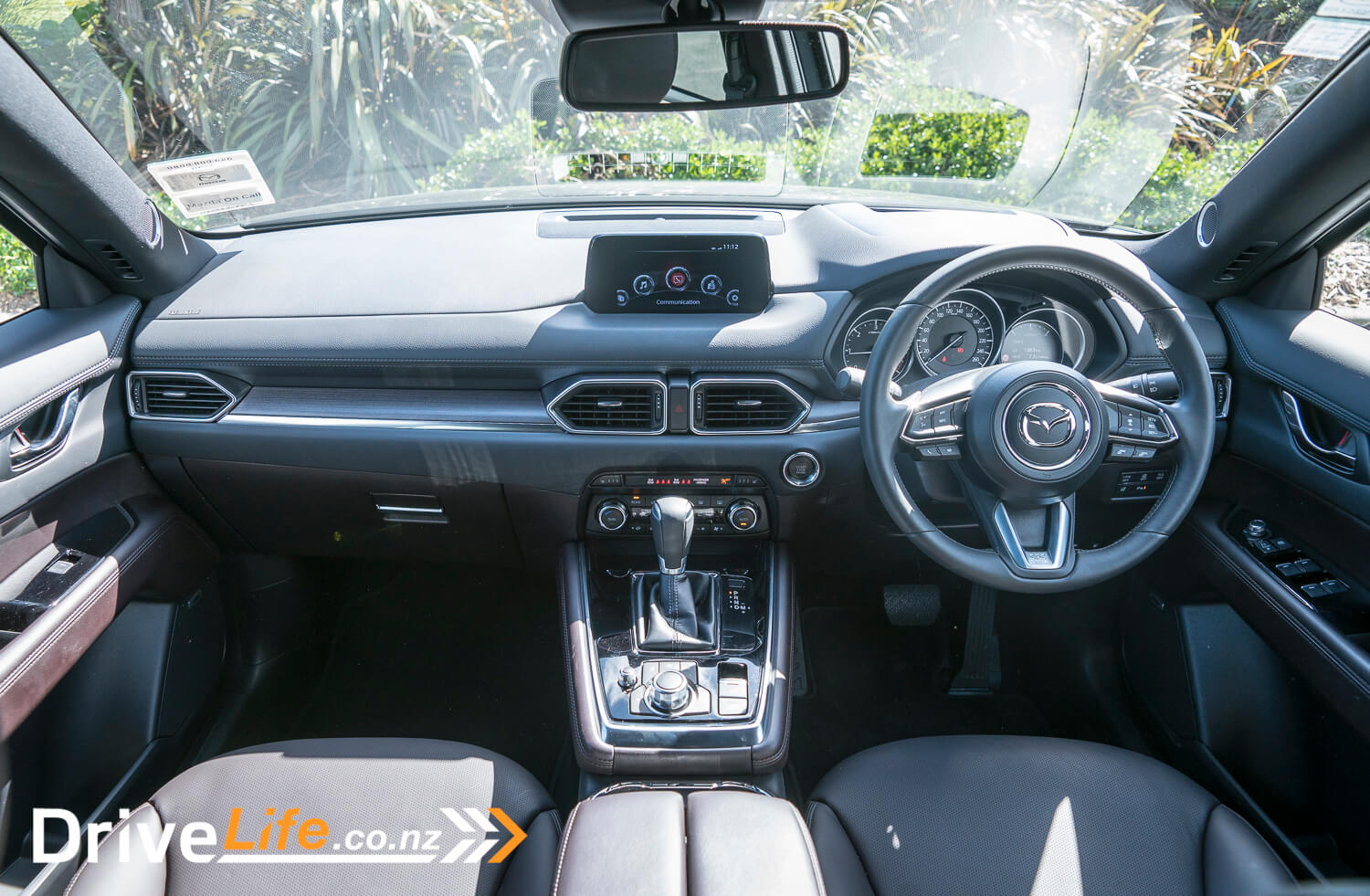 The interior is modern and sleek, the dash is free of clutter with only a central display screen protruding from it. The main feature in the dash are the air vents, positioned a little lower than normal, which help to give that dash a cleaner look. The only selection of buttons were clustered neatly under the central vents. This is where the buttons for the heated seats, front and rear window demister, aircon temp and dual zone controls live. I liked this configuration, as it kept buttons close at hand while being out of the way and didn’t clutter the inside of the vehicle. The steering wheel had a similar selection of buttons, covering cruise control, audio volumes and phone controls. It was clean and the design blended in the button, making it feel minimalist. All of the controls where easy to use and well thought out, all expect the on and off button for the cruise control. This button was a bit lower under the main buttons, which placed it out of the way for ergonomic use. This means that when I wanted to turn the cruise on and off I had to lift my right hand off the wheel to press the button. Not sure this was well thought out.

Behind the wheel, there is a simplistic instrument display, broken up into 3 dials. On the left you had the RPM, in the middle there was the speed and on the right there was a multifunction dial. This dial displayed the fuel, engine temp and an LCD in the centre for additional info like range and economy. It was not fancy or too high tech, but it got the job done as it had everything you really required.

The seats looked like they were from a 100k European vehicle – nice material and good shape all around. The driver’s seat is 10-way fully electric and the front passenger is 6-way fully electric. Additionally the driver’s seat has the ability to save 2 memory positions. I found myself having plenty of room in the driver’s seat, and remembered it taking no time at all to find a comfortable setting for all adjustments. Both of these seats were also heated, as were the second row of seats. I was impressed, as heated seats in the second row is still uncommon in vehicles twice the price. The second row of seats are not electric, but can be manually shifted forward and back for more legroom. There was so much room back there, even for a tall guy like me, it felt palatial. The third row was not a spacious as the second, which is common in most SUV’s. The second road slid forward to allow somewhat easy access. I found it a bit tight, but I am probably not your typical third row seat passenger. The boot was a great size at 742 litres when the third row was down. This was much bigger than expected. I did notice that the third row didn’t lie completely flat, unlike some other SUV’s. When the third row was up, the boot space was reduced to 209 litres. Not massive, but not terrible either. There was a bit of room left for bags or shopping if all seats are required.

There really was not much to dislike about the interior of the Mazda CX-8. It did however have a rather small central LCD display. It is widescreen, which helps, but it’s not very tall. The system itself worked well; simple top menu with an easy to follow sub menu for each area. I found it was quick to learn and easy to use for all of my requirements. It was also disappointing to see that there was an option for Apple CarPlay and Android Auto, but neither were standard for even the top spec’d model. They do offer a 3.5mm that’s MP3 player compatible and 4 x USB inputs that are also iPod compatible. The 2.2-litre in-line 4-cylinder twin-turbo diesel engine was a perfect match for the CX-8. The 140kW and 450Nm produces is the right amount of power for pulling its weight, while being super quiet. It is a diesel, and when you were travelling on the motorway or even under heavy power loads, it sounded no louder than a petrol engine. The i-Stop system worked so well that I just left it on all the time, which was uncommon, as I tend to turn them off as the delay to restart can be irritating. But the CX-8 started up the instant you needed it to.

The chassis has a mixture of systems that are setup to make the driver feel confident and safe. Most drivers will never notice what goes on under the their feet. The biggest advancement is the introduction of G-Vectoring Control technology. This is a rather complicated system that uses the engine to slightly adjust power while driving to shift weight centre of gravity around the vehicle while cornering. The result of this is a much smoother driver experience and greater control with high speed emergency maneuvering. I was lucky enough to experience what this system can do at the Snow Farm test tracks in Queenstown, the difference was amazing. Mazda’s SKYACTIV-Drive transmission is another trick up their sleeve, which provides improved fuel economy. The advertised combined rating is 6.0-litres per 100km, and over the course of the week, with a 60/40 mix of city and motorway driving I was able to achieve 7.2-litres per 100km, which I thought was pretty good, considering the size of the engine and vehicle.

The ride inside the CX-8 was much better than I had expected. Much like the interior, the overall feeling while travelling in this 7-seater was luxurious. The entire vehicle felt light and easy to maneuver, even in tight spaces. While out on the open road the CX-8 handled well even though it was not as wide as its big brother the CX-9, there was minimal body roll in the corners, and when there was, the sculpted seats performed their job as intended. One thing that bugged me about the CX-8 is the electric handbrake. During my time with the CX-8 I could not get it to releases automatically when I pressed the accelerator. I got in touch with Mazda New Zealand to check if this was the case and found that it should have released. Maybe there was an issue or something was not working right during my review, which can happen. The main thing is that Mazda say that the handbrake will release automatically when you press on the accelerator. 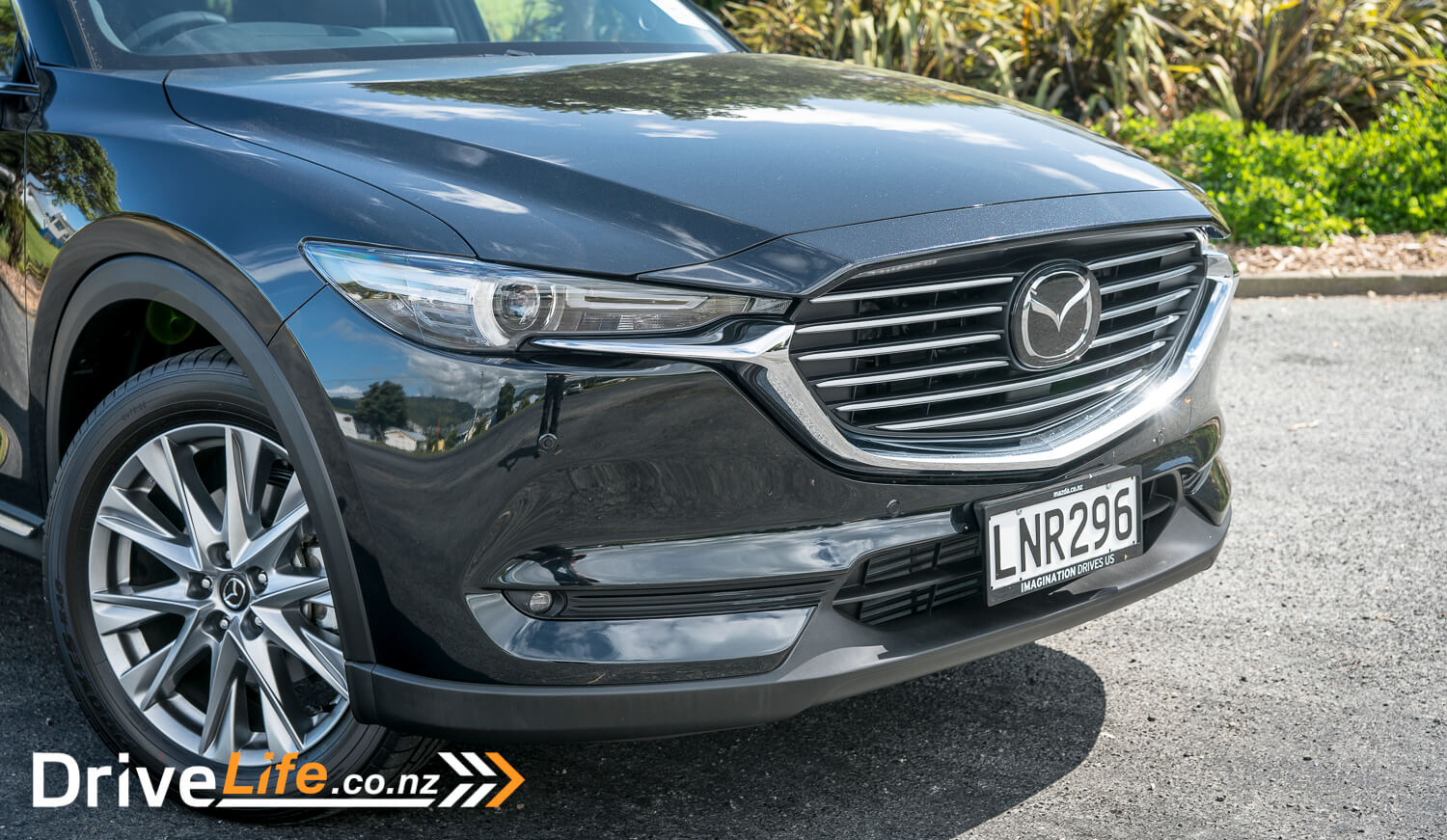 As the market for SUVs reaches all-time high, there is more and more competition for this price bracket of the market. 7 seaters are like catnip to most families; value for money, user friendly, latest tech and room for the whole family. I personally think the toughest rival is the Skoda Kodiaq which two awards from DriveLife last year – Best Family Car of the Year and Best Value Car of the Year.

As a complete package, the Mazda CX-8 is a good one. Smart and stylish exterior, high-quality modern interior and a high level of standard features across the range, followed up by a list of safety and driver aid technology that’s is as long as my arm. Let’s not forget that it’s also a 7-seater that feels more like a 5-seater to drive. It’s really a hard vehicle to fault.

The CX-8 feels like a far more expensive SUV than it is, which makes it a hard one to beat in the 7-seater market.