The Forester has been with us for over 20 years, and is now in its fourth generation. Would this new facelifted 2019 model year Forester live up to the high standards that its sister cars have set recently? Subaru gave us one for a couple of weeks to find out.

There are three models in the Forester range, and they all feature the same 2.5-litre four-cylinder boxer engine mated to an SLT continuously variable transmission (CVT).

As you’d expect with a biggish SUV the available colours are mostly shades of grey, plus a muted blue, bronze and green, and the one brighter colour – the Crimson Red Pearl you see here on our review car.

Whilst it is recognisably part of the current Subaru, family, and the rest of the range look pretty good, I’m not sure the Forester really pulls it off. To me there’s something about the lines that make it look a little ungainly. The rear looks good, the front okay but I’m not a fan of any other views. It does have a presence though, and Subaru haven’t overdone it with the amounts of plastic and chrome dotted about the car. I think the wheels are a bit fussy too.

I do like the red of our review car, which had a great metallic gloss to it in the bright sunshine. Once you’re inside the Forester, the uninspiring outside can quickly be forgotten Recent Subaru interiors have been rather good, and this one is no exception. The dash has sharp, modern lines, and the materials and finish are very good. The perforated leather seats look great and are comfortable. A little surprisingly for a top-spec model they’re not heated.

Most of the interior parts are grey, but Subaru have added contrasting stitching to brighten things up a bit, plus the pillars and roof are lined in beige. Combined with the large glass sunroof, this makes the interior feel very light and spacious. The sunroof has a blind which can be pulled across, to close it off and I was surprised to find that it’s manual, despite the sunroof itself being electrically opened. It’s not something I would normally have noticed but it’s a bit of a reach back from the front seats to be able to close it.

There are three display screens – the main 8” central touch screen which controls the entertainment system and main camera views, a 6.3” top display, set further back above this, which can show a multitude of vehicle information, and finally the centre screen in between the two main analogue dials in the dash cluster. All screens are clear, with good resolution, and are easy to read. The steering wheel is leather trimmed and a good shape and size, and has all of the buttons you need to control the stereo, cruise control and phone functions. There are an extra set of buttons at about 7 o’clock which allow you to cycle the top display functions, plus another set on the dash behind the wheel to control the instrument cluster screen.

There are lots of options, and lots of information is available such as road speed, music info, satnav directions, wheel and vehicle angles for off-roading, front and side camera views on the top screen, but I found that once I’d got a set of screens I liked, I left it alone after that. Subaru have chosen to go for more physical buttons rather than burying all of the functions in the main screen options menu. I do like that, but it can make the dash a little bit busy. There’s dual-zone climate control, operated by nice simple physical knobs, and under that there’s a cubby with power, aux and two USB sockets.

Moving to the back you get plenty of leg room, and reclinable seat backs, meaning it’s easy to get comfortable, and it’s nice to have that flexibility for long trips. The seats fold almost flat using levers in the boot, or on the seats themselves. A feature you don’t get that often is that Subaru have made a space under the boot floor which fits the load cover. Often you have to leave them in the boot, or at home if you don’t want them in the way. The boot is a pretty generous 498 litres, or a very practical 1768 litres with the seats folded. This is despite there being a full-sized spare under the boot floor. There are hooks to tie luggage down, and a few bag hooks dotted around the sides of the boot. There’s also a fold-down hook in the tailgate itself, which could be useful for hanging things when sorting out your boot contents. The tailgate is electrically activated, which is a great convenience feature, but I did have a problem with it on one occasion where whatever button I pressed, I just got three beeps and it refused to open. Holding down the button for five seconds put it into manual mode and I was able to open it. From that point on it performed faultlessly.

The Premium spec includes a nine-speaker Harman Kardon stereo with a subwoofer integrated into the side of the boot. It sounds really good, with great bass and clear sound. It also switches back to Bluetooth quickly on starting the car. One of the first things the Forester does when you push the start button is scan your face. Yep, this car has facial recognition and can identify up to five stored drivers! Once it’s set up, which is a quick and simple process, it sees you and welcomes you with the name you entered. It will then adjust the seats, mirrors, displays and climate settings to your preferred settings. Its other function is driver attention monitor. If you look away from the windscreen too long, look at your lap, or even pick your nose, it will beep and flash up “Eyes on the road” on the driver display. Clever stuff.

The Forester has Subaru’s 2.5-litre boxer engine, and it can hustle the car along pretty rapidly. It can sound a bit dieselly when cold, and generally has a bit of a lacklustre sound to it. Most of the time you barely notice the engine noise as it’s so well sound proofed. When it comes to noise, the Forester has a pretty refined cabin, definitely one of the better cars in its class. There’s some wind and road noise but it’s well-damped. Being a 2.5-litre I was expecting the Forester to use more fuel than the quoted 7.4 litres per 100km, but I was pleasantly surprised, managing 8.6 over a week of mixed driving.

One of the things we at DriveLife often complain about is CVTs. They’re a clever technology and in theory are very efficient transmissions, but they tend to be a bit soulless and suffer from flaring when accelerating, causing a constant and uninspiring rev sound. Well I’m happy to report that the Lineartronic unit in the Forester is really good. It simulates a 7-speed transmission, and it feels, well, like an auto. You have steering wheel paddles that can be used to simulate gear shifts if you feel the need, but I found it was fine just in auto mode. I had to double check that it was actually a CVT. Nice job, Subaru!

The ride in the Forester is tuned to be comfortable, as you’d expect in a family SUV, which translates to a bit of body roll if you push it too much into corners. It does handle well despite this, with the four-wheel drive system giving you confidence in the bends.

All specs of Forester include Subaru’s Eye-Sight system which gives you several safety and collision avoidance features, as well as smart cruise control. The smart cruise is excellent and really takes the stress out of a busy commute. It anticipates better than a lot of similar systems, and brakes smoothly when it needs to. Some manufacturers’ systems tend to be a bit on-and-off, but this one is not. There’s steering assist too, which will actively try to keep you in the centre of the lane. This wasn’t as successful as it struggled to see the lanes properly around Wellington, but many other cars also struggle here, so I won’t hold it against Subaru. When it could see the lanes, it worked well and wasn’t too intrusive. The one thing I’m not a fan of with Subaru cruise control is the beeps – every time it detects or loses a car ahead, it beeps. It seems quieter than in other Subarus but it’s still annoying and unnecessary.

There’s a row of LED lights behind the dash cluster which shine onto the windscreen as a kind of basic heads-up display. You get a green light when cruise is active, amber lights to indicate if a car is on your blind spot (as well as the ones in the mirrors), and all flash red if the car thinks a there’s a risk of a collision. I’d rather have a HUD though.

The driver’s display in the instrument cluster can be configured to show the current speed limit at all times, which I think is a great feature. The Forester doesn’t read road signs, but gets it from the satnav database so it’s not always 100% accurate but it’s very useful. If you go over the limit by 5kph it flashes at you as a warning. This is particularly useful as the Forester’s high driving position and great sound damping mean it’s easy to let your speed drift up without realising.

Other useful features include automatic braking when in reverse, to hopefully stop you being able to back into anything. Subaru have also added reversing sensors as well as the rear camera, which is a welcome addition as a lot of other Subarus have just cameras. I think Subaru have done a really good job with the Forester. There’s some very clever technology for safety and convenience, it’s spacious and comfortable, and decent value for the features you get.

I’m not sold on the looks, but the interior is very good, and the levels of noise and refinement are impressive.

It’s certainly a good option for your family SUV. 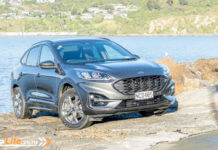 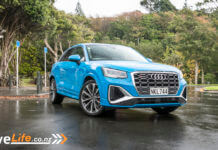