I was curious about this car, it’s a crossover SUV, not quite a car not quite an SUV. And what I have found with manufacturers when they make these cars is that they are either amazingly well thought out or just overpriced rubbish.

The entire range uses the same 1.8-litre 4-cylinder, 16-valve, i-VTEC engine. There are no changes to power or torque, with this engine offering up 105kW of power and 172Nm of torque. Similar to the engine, they all share the same automatic CVT transmission with G-design shift.

The entire HR-V range has a impressive selection of safety features as standard, offering Honda’s City-Brake Active technology (low speed, autonomous emergency braking), providing audio and visual warnings to the driver. It can then apply braking when the vehicle detects a potential collision may occur.

The range comes pretty well spec’d across all models. For a full list of specs please check out Honda New Zealand’s website – LINK The Honda HR-V I would be testing was in the exclusive RS Phoenix Orange Pearl with RS 18-inch alloy wheels. It’s a pretty sporting looking vehicle, the colour is perfect, really rich and firey. It was a sharp design from all angles, combined with that exclusive colour, I could see the HR-V RS turning some heads.

It was not a very big looking vehicle either, which had me concerned. I was starting to wonder if I would fit in it comfortably for the week of the review.

After leaving the dealership, I found myself parking it in a busy central city street. In the space of time I got out, went to the post office, and came back to the car. I had three different women, across several age groups commented on the car and its styling. I had only had the car for less than 30 minutes, and did not expect it to be such a head turner. This is something that I have not experienced before, even in some of the more expensive cars we review.

Standing back and looking over the Honda HR-V, they were right; it’s a pretty good looking vehicle. How the headlight and the front grill work together was great. I especially like the strong line that goes from the side of the front wheel arch to the rear door handle. It breaks up the big shapes and gives it a good modern flare. To my surprise and I think to the dealer’s too, when I sat in the Honda HR-V R for the first time, I found that it was rather roomy. The front seats are a good size, not narrow like many cars are in this bracket. This was largely thanks to the smart design of the central console. It was thin, with nothing more than you really needed, all in a single line. This meant there was more room for seats either side of it, which was great.

The seats were completely leather in the front and back, with perforated inlays that gave it a sporty feel. The rear seat were not as sculpted as the front two, they had a bit of shape, but I felt they were somewhere in between the front seats and a flat bench. They were not uncomfortable, just not as good as the front two. The space in the back was great, even as a tall guy, my knees didn’t even touch the back of the front seats.

The rear seats were a bit of a feature. For anyone not aware of the magic seat system, it always received great feedback. Much like every other SUV out there, the seats fold down so the boot  space can expand for additional storage. Unlike many other SUV’s the features don’t stop there, the seats can fold up from the base too. I was impressed with the control panel under the media screen, it was touch sensitive, clean and simple. There was not many buttons on the dash, as they were all here. Seat heating, aircon, front and rear demisters, all the normal buttons, cleverly put together in a nice neat package.

The boot is a good size at 437 litres, similar to any midsize SUV or hatchback on the market. I was taken aback by the choice of material used for the parcel shelf. It was not the typical hard fabric covered card, but a thin fabric mesh that with a hard wire running around it to hold its form. It was not structural in anyway, and even a jacket was too heavy for it. It’s simply there to create a barrier between the outside and the contents of the boot. The plus side of this material was that you could twist it up into a much smaller shape and pack it away. This can be rather handy when out and about and you find you need more space in the boot. Sometimes those hard parcel shelves can be a big pain to try and store somewhere else in the vehicle. I have avoided this for long enough and highlighted everything else that I thought was really great. Now we move onto the touch screen Infotainment unit. In an effort to rip this plaster off quickly, it’s rubbish. It was not just something that I didn’t like, it was not very good at any of its features. This car will hold for me the record for the longest time to pair my phone. It was mid way during the week behind the wheel when I tried it again and finally, it connected.

I was amazed at the layout, the interactivity and how the functions expected you to operate them. It felt like Honda was trying to be different, while not testing what everyone else has in the market. If only one thing could be changed about the HR-V, it’s the Infotainment system. Lets not build any suspense here, the HR-V is not really a driver’s car. By that I mean, it’s not a hard or skill-based car to drive, nor does it make you sit on the edge of the seat. It’s great to drive, simple, effortless and a bit of fun. I really enjoyed my time behind the wheel of the HR-V.

The balance of everything in the car was just right; the engine size, the weight and the handling. It’s almost that Goldilocks car, not too fast or too slow, not too firm or soft, not too loud or quiet  and not too much body roll. Everything was just right.

Even the CVT was pretty good, which is a big thing here at DriveLife, ‘cos we dislike them. But this one was good, as I never really noticed it was operating any differently to an automatic. The steering wheel did come with paddles to change up and down gears, which I don’t think was needed. It’s not a sports car, and CVT’s are not ideal for engine braking, so why have them at all? The steering wheel controls were a bit different, with a selection of buttons towards the bottom of the wheel. On the left you have answer and hang up your phone, on the right you have cruise control settings. I found this an odd place to put them, as they were not within reach of your fingers. Each time I wanted to use the cruise control, I had to take my right hand off the wheel and press the buttons required. Not sure this design was fully thought through.

The upside of not being able to put many of the new safety features to the test is that we didn’t encounter any possible accidents. During my time with the HR-V, I never had any interruptions from the vehicle’s safety systems, trying to take over thinking something was about to go wrong. We have seen this in other cars, but we will have to continue to test Honda’s cars to see how well they fare across multiple reviews.

Apart from the controls on the wheel I couldn’t really fault the drive, it was so easy to live with on the day to day.

It’s anyone’s game around $40,000, as a consumer you have what seems like an endless list of vehicles in all shapes and sizes, for different walks of live. Best thing to do is try as many as you can, so you are comparing apples to apples. 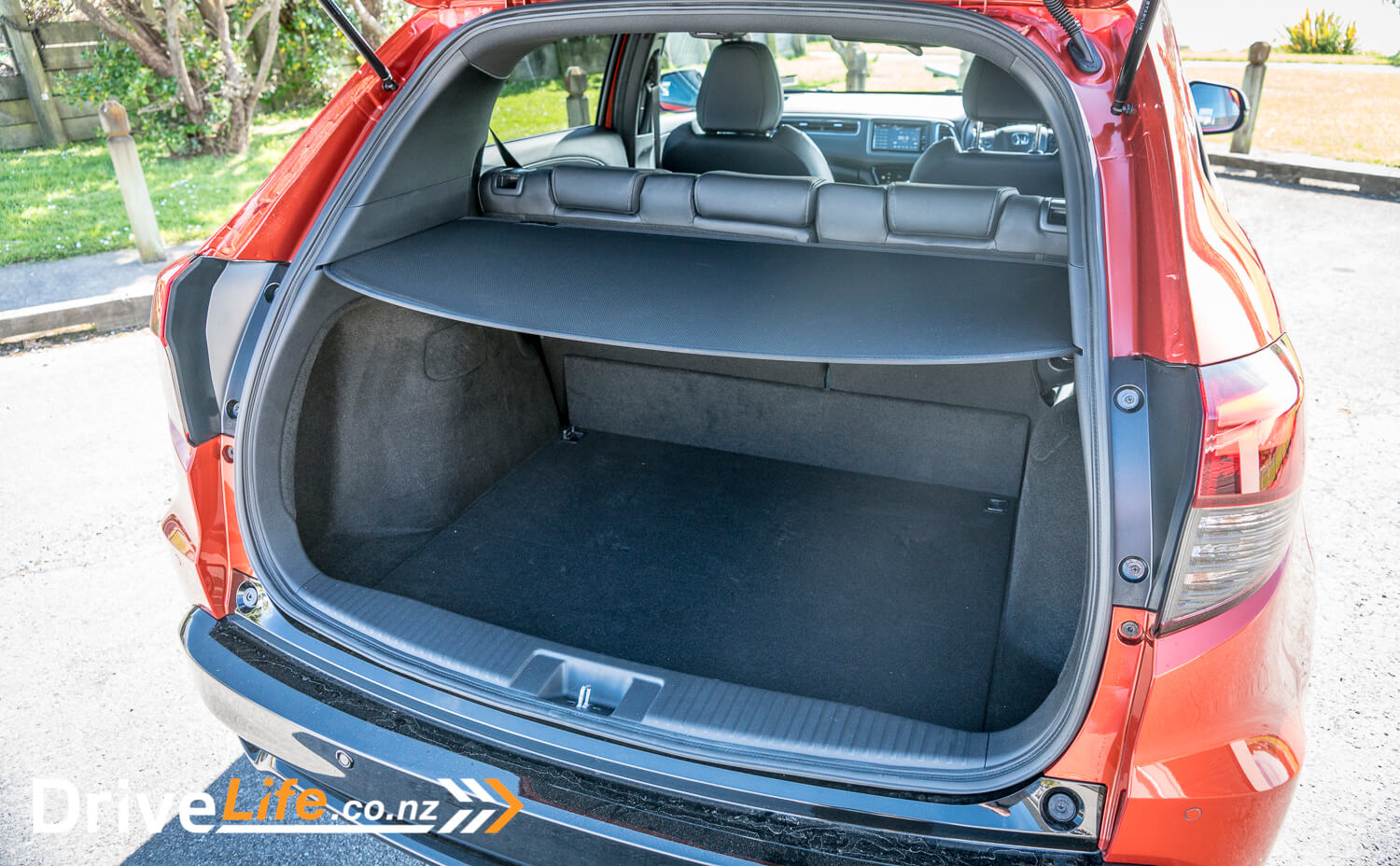 The midsize SUV and midsize Crossover segment is a hard one to stand out in, but it can be done. I think Honda has done just that with the HR-V, its ticks all the boxes, but does it with a bit more style than many of the other options available at that price.

It’s a spritely car with a sports nature which gives it a fun side. Everything Honda is so practical and the HR-V with its thin centre console and magic seats leaves it with an extra feather in its cap. Interior and exterior styling are akin to more expensive European cars, what more can you ask for less than $40,000? Ok, you can ask for a better media screen, Honda, this is the HR-V’s only real flaw.

For a daily runabout or a full-time family car, the Honda HR-V stands out in more ways than one. As a package, the HR-V is not one to be underestimated or overlooked. 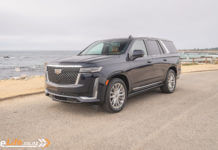 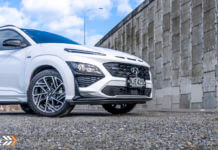