Hyundai’s first foray into the hot hatch market has been getting a lot of attention around the world. I was a little underwhelmed by the 1.6T version, but with over 200kW through the front wheels, the i30N promised to be a handful of fun. We were all pretty excited to get one to drive around for a couple of weeks.

In case you’re wondering, the ‘N’ stands for Namyang, Hyundai’s global R&D Centre, and for the Nürburgring of course. The three main specs are covered in my 1.6T review, so I’ll just cover the spec of the i30N here.

The i30N is powered by a 2.0-litre turbo direct injection four-cylinder, and generates 202kW and 353Nm. All of that power and torque goes through the front wheels, via a 6-speed manual transmission. The normal i30 is a good looking car, and externally, the N isn’t hugely different from the Limited spec. But it has enough special little touches to elevate it above the normal car. There are new front and rear bumpers, with red piping along the bottom, side skirts with the N logo inset, a bigger rear spoiler, and fatter twin exhausts. The 19” two-tone wheels finish off the look with red-painted calipers showing through. It looks purposeful and sporty, just as you want your hot hatch to look.

Our review car came in Phantom Black, which looks great and makes the red details really stand out. Inside, the i30N is pretty standard Hyundai, which means good quality, if a little plasticky. There is quite a lot of plastic on show compared to your more premium hatchbacks, but it’s solid and feels well screwed together.

The seats are really good – leather outers with suede centres. Just enough side support without being too much of a bucket seat, and the suede means that your bum doesn’t slide around on hard cornering like it might in a leather seat. They’re heated, too and have adjustable length on the seat base, which is usually a feature reserved for more high-end cars.

The steering wheel (which can also be heated) has a nice, chunky feel to it, and has all of the usual Hyundai buttons for audio, phone and cruise control, plus two big blue buttons added just for the N. The left-hand one cycles through the usual three drive modes – Eco, Comfort and Sport. The right-hand one puts you straight into N mode. More on that later.

There’s a big analogue rev counter and speedo with a colour digital display in the centre. This display can be configured to show various information including a digital speedo. The rev counter has LEDs around the edge, which light up as you approach the red line, and LEDs flash in the centre when it’s time to change up. It’s touches like these that add to the feel of a car like this.

The i30N has a central touch screen, placed high up on the dash where it’s easy to see and reach. There are physical buttons for the main functions, and proper knobs for volume and track skipping. The stereo is good but not great, and I had a strange thing where my phone went to zero volume every time it re-connected to Bluetooth. But most of the time I was enjoying the noises from the exhaust so it wasn’t a big deal.

There’s a whole range of geeky information available from this screen that you don’t get in lesser i30 models. There’s a G-meter, power, torque and boost gauges, with historical graphs, and a performance timer. If you go into individual mode there are seven car settings which can be adjusted to your taste. These are suspension, steering, stability control, engine, rev matching, exhaust sound and e-LSD, and each can be adjusted from comfort to sporty as you see fit.

Under the screen are controls for the dual-zone climate control, which are well laid out and easy to use. Then at the bottom is a Qi wireless phone charger, two power sockets, USB and aux input.

The rear seats look just as good as the fronts and are comfortable. There’s good leg room for a hatchback this size.They fold flat and split 60/40 to expand the boot space, but the big, chunky rear strut brace might get in the way of the really big items. The boot is a good-sized 381 litres and has a dual-height floor which can either sit higher and level with the folded rear seats, or lower to give a deeper boot.

There are good-sized hooks in the sides too to hang your shopping bags from. Under the floor is a space saver spare wheel. This is the bit I’d been looking forward to. How does the i30N drive? Initial impressions were good – in traffic, in the standard drive mode it felt firm but comfortable. Steering was light but not over-light. The six-speed manual felt tight and satisfying to shift, with the lightest clutch pedal I’ve ever used. After cruising long enough to warm the engine I couldn’t resist pressing the N button. I set off from the next set of lights at a fairly leisurely pace and was delighted when I shifted to second and the exhaust made a crack-crack-crack noise! This was just awesome, like a rally car, and had me grinning at every shift as the car made pops, cracks and what I can only describe as woofling noises. Excellent stuff.

Back into traffic and I tried out Eco mode. It wasn’t too bad as these things go, softening the throttle to slow down acceleration, but with this being a manual there was still plenty of control over how the car went. The i30 has a current gear indicator on the digital display in case you forget which you’re in, and a suggested gear, which always leans towards the gear for best economy. There’s cruise control but it’s not smart cruise, which would have been nice to have at this price. It can be done with a manual, the Suzuki Swift does it really well.

Out on the back roads is where the i30N really comes to life. Hit that N button and a valve opens in the exhaust for a more racy sound. It’s still not that loud, but it gives it more character and allows for those excellent crackling noises. The suspension has adaptive dampers, which firm up in N mode, the throttle and steering get quicker. Start to press on and the car feels tight and firm, but still pliant enough to soak up the bumps. The gear shift is tight with a short throw, and clicks into gear with a really satisfying feel.

The steering gives decent feedback, turning the car into corners well and giving you the confidence to chuck it around a bit. It’s one of those cars that makes you grin as you really get into the rhythm of tacking a twisty road. The engine sounds pretty good for a four-cylinder, and you can hear the turbo whistling as the boost builds. And every time you shift or lift off, it makes rude noises.

Push it hard and it will understeer, as you might expect from a front-wheel drive hatch. There’s torque steer too on hard acceleration. With 200kW through the front wheels that would be hard to avoid. There is an electronic limited-slip differential to calm this down a little bit, but it’s a hot hatch, you don’t want it to be too civilised. The whole N-mode driving experience reminds me of the FN2 Civic Type-R. A bit unruly, sometimes scrabbling for grip, but tremendous fun. Unlike the older Honda though, you can turn it down when you don’t want it, and that’s another reason to love the i30N. Put it back into comfort mode and it quietens down, softens up, becomes a normal – but quick – hatchback. It’s easy to drive, easy to park with its all-round parking sensors and rear-view camera. It did seem to have quite a wide turning circle when pulling into my tight driveway but apart from that I didn’t have any issues.

I drove the i30N for a week with mostly around town driving, and a couple of longer trips to fun back roads, and averaged a fairly high 11.8l/100km. High, when compared to the quoted combined figure of 8.0, though given my usage the urban figure of 10.6l/100km is probably a fairer comparison.

Plus, I must admit to putting it in N mode whenever I got the chance, just to hear those noises. The i30N was one of a short list of cars that I really didn’t want to give back. It looks great and has presence with those 19” wheels and sporty touches. It’s practical and sensible when you want it to be but it’s also a grin-inducing, powerful hot hatch.

The clever electronics allow it to have a split personality and that’s a really big advantage of modern hot hatches. It’s so close to being a five chevron car but the only thing that lets it down a little from a full rating is that the interior isn’t as nice as some of its competition.

But don’t let that put you off! It’s a great driver’s car and I love that you can still buy a manual hot hatch. 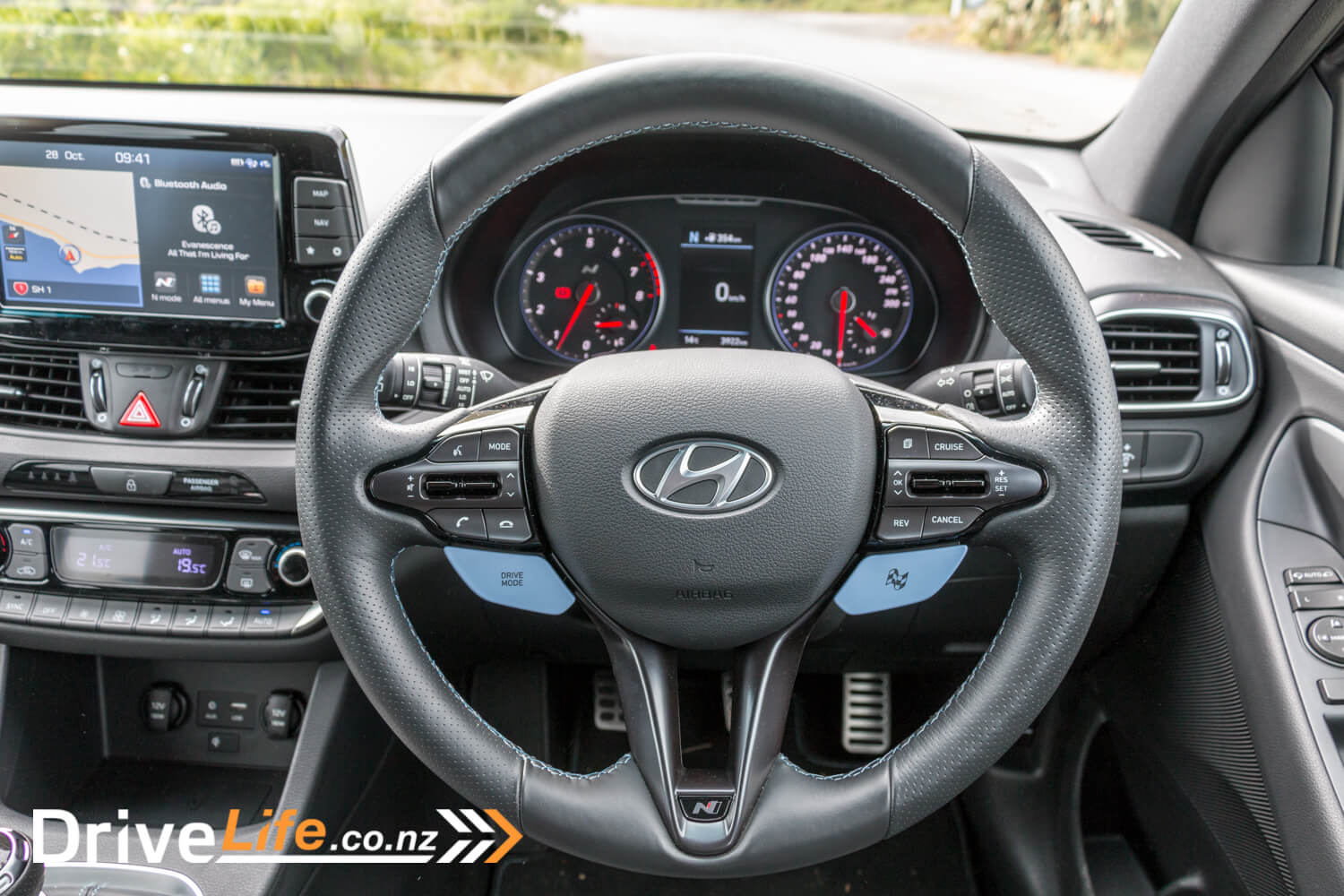