We have all seen the new ad campaign running for Mitsubishi’s new Triton. It looks rough and ready to take on anything New Zealand can throw at it. They tagline is that the new Triton comes with Beast mode on.  After seeing this advert a few times, I thought we must get a new Triton to test. If it was not a sign from the gods themselves, we got an email the very next day from our friends at Mitsubishi, wanting to know if you are keen to test the new Triton out.

We can’t really say no if the order has come down from above, plus we get to see what this Beast mode is all about.


To say there is something for everyone in the new Triton range is an understatement, as there are currently 14 variants of the 2019 Triton available in New Zealand. All models come with the same 2.4-litre diesel engine, which created 135kW of power and 437Nm of torque. This torque combined with the 2WD and 4WD systems offers a range of towable ratings, from 2,500kg in the GLX all the way up to 3,500kg for the VRX

For the full range of options and accessories available for the new Mitsubishi Triton, check out Mitsubishi New Zealand’s website – LINK

I will be honest in saying that we never had a chance to review the previous Triton, it was one we had been keen to test as there are so many around. Even though we didn’t get to test it, we all knew a bit about it. The main thing everyone seemed to point out was the curved body line between the rear of the cab and the tray. It was a love/hate thing, and I must admit I didn’t like it.

Thankfully the new 2019 Mitsubishi Triton is a whole new beast, with a long awaited redesign. It’s big with strong sculpted features and a face like a Easter Island statue, which makes it feel rather tough. It will still be a love/hate thing, but I have to say I do like it. The design language is clear from the rest of the Mitsubishi range, while projecting a ready for the rough stuff attitude.

Most importantly was that the sweeping curve between the rear of the cab and the tray had been updated to work better with the new design, making it less of a feature that many of us came to dislike. Inside, the Triton is similar to the rest of the Mitsubishi range, with more harder plastics to withstand the tough life of a commercial truck. Even so it’s nicely presented, with leather seats, leather steering wheel and modern central media system.

Unlike many other utes, the VRX comes as standard with keyless entry, and push-button start. This is impressive, as there are some top-spec utes over $40k more than the VRX that still don’t have these features, even as an optional extra. It’s the perfect option for a ute as you don’t need to be fumbling around for keys to get in and out or start the truck, just jump in and go as long as the key is on your person.

The seating position is great, nice and high with good visibility around the entire vehicle. I did notice getting in that the Triton seemed to be a bit higher than normal, being tall it was not a struggle, but the first step in might be a bit higher that expected to other utes. The seats where nice and supportive, with easy adjustability to find that great driving position. The back seats are spacious and comfy, not as sculpted as the front, but they do the job well. It seats three across the back with fold-out central arm rest if you only have two rear passengers. At the rear of the centre console, there is a small storage area and and USB power outlet. The rear seats did not appear to offer any adjustment for additional storage. I could not fold the bottom bench seat out of the way or fold the seat back down to create a cargo like areas that other utes offer. It’s always the downside of a ute, there is usually little or no options to store stuff out of sight, that is unless you want to just use the covered deck. However this is not ideal for things like laptops or shopping.

The driver’s display is clean and simple; rev counter on the left and speedometer on the right. There is also a small LCD display in the between both dials for additional information and settings. One age-old flaw I did find, was that the set cruise control speed was not displayed anywhere. So you were left guessing what you had set it at. This seemed like issues we had with vehicles 10 years ago that really should have been addressed by now. I was a bit frustrated with the driver’s dead pedal, it was not very large at all. I have always believed, either leave a space for your foot or a decent dead pedal to rest it on. If there is something that is only able to support 30% of your foot, it just gets in the way and can be uncomfortable for longer drives.

The VRX comes with dual climate control, which comes with a typical array of settings located under the central display screen. During the time I was reviewing the VRX there was a heat wave in Wellington, where it got up to 33 degrees on certain days. Jumping in the VRX, and setting the climate control to 19, it took no time at all to make me feel chilled and relaxed away from the high temperatures.

The Triton’s central media display is not bad – its design looks like a phone on its side, with several touch screen buttons for apps, home, menu, power and volume up and down. It’s simple and gets the job done, there are not many menus to get lost in, just easy selection buttons for phone, ipod, USB, FM, AM, DAB and settings. I felt like the screen could have done with a better anti reflective coating, as it was sometimes hard to see in the bright sunlight. The new Triton sounds like a beast with its 2.4-litre MIVEC turbo diesel engine, which creates 135 kW of power and 437 Nm of torque. At no time during my time in the Triton, was I ever left feeling that this vehicle does not have enough power. The engine has loads of torque, across what feels like the entire rev range. In 2WD it’s easy to get the rear wheels spinning if you pull out of an intersection and need to get up to speed quickly.

On the motorway, I found that it was not too noisy around 100 km/h, but I did find the throttle a bit on the sensitive side. With so much torque, it was easy to drift up 10km/h or more without even knowing it. I found myself using the cruise control on the motorways, so that I would stay within the limits.

The only thing I found odd about the engine, was during idle, it would from time to time go up and down in the revs without any input from the driver. It felt a bit old school, perhaps not as refined as some of the other utes on the market. This had no effect on the driving experience at all.

For a vehicle of this spec – and I mean commercial spec –  I was surprised to see so many safety systems on board. This was a great addition, making it even better value. As standard the VRX comes with forward collision mitigation, blind spot warning, lane change assist and front and rear sensors, rear cross traffic alert, and active stability control. A list like that is not always standard on some of the latest SUV’s in the market. I found these systems to work well, when required, none of which were too intrusive or annoying.

The ride was good, but stiff. It felt similar to some other utes, which benefit having a bit of weight in the back deck to make the ride a better. The rear suspension is setup to take a big load of 905kg, so even getting a bit of weight in the back will help to smooth out the day to day ride. Even with the tray empty the ride was still good, with minimal body roll in slow and more spirited driving situations, Which was surprising for such a tall vehicle. The Triton comes with the new 4WD system, Super Select II 4WD with Centre Diff and Off Road Mode. In the centre console there is a dial that allows you to select 2H (2WD High), 4H 4WD High), 4HLc (4WD High Locked Center Diff) and 4LLC (4WD Low Locked Centre Diff).  Below this you had two additional buttons, hill descent and off road mode. Switching from 2H to 4H was easy and could be done on the move without any drama. To switch from 4H to 4HLc or 4LLc the system requires you to stop for a few seconds while it makes the changes required.  Again, no drama and you’re away ready to take on any terrain.

While there was no opportunity to do any serious off roading, we may look into this in the future. Where I took it off the road, it handled well, across multiple different surfaces. The Triton gave the driver a lot of confidence to tackle different situations, even so far as to urge you to get a bit rough with it. This might be the beast mode they are talking about.

I am not sure who made the crazy call or mistake, but the special Mitsubishi have on the new Triton 4WD VRX is crazy. The top spec model is now available for $5k less than everyone else. In some cases this is $10k to $20k less than its competition. I sometimes want to do things my own way, without following the rest of the herd. But I also like getting a good product and a good deal, which is why the Triton stands out from the crowd.

As a complete package, the new Mitsubishi Triton is a serious contender. It’s big, tough and ready for action or just everyday life. Great spec level, with everything you need and not much you don’t. Add to that, many of those options don’t come standard on other more expensive brands.

The redesigned look has put the Triton back on the map, you would be foolish, not try one if your looking for a new Ute. 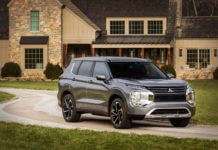 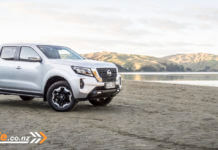 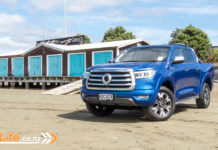