It’s no secret I’m a big fan of Mazda’s current lineup, even their constantly-growing crossover/SUV lineup. The latest addition is the MX-30 which also marks Mazda’s commitment to electrification. Not only does it show where Mazda sees itself going in the next 5-10 years but also shows the brand maturing in both technology and quality.

At the time of writing the MX-30 will be available in two electrified versions; a mild-hybrid and a full EV. For most export markets (including New Zealand) the MX-30 will be sold solely as a pure EV with a 105 kW 35.5 kWh battery that’ll do a claimed 200 kilometres on a full charge. This wasn’t available for a full road test drive yet but will be soon. Mazda is also working on a plug-in hybrid with a rotary range extender for the MX-30. Watch this space.

For now, I got to spend time with the mild-hybrid version of the MX-30 which combines the tried and tested 2.0-litre SkyActiv-G petrol engine with a 48V battery to see what it’s like. Here’s five things I liked and five things I disliked about the Mazda MX-30.

Looks a subjective thing but I think the MX-30 is a rather handsome thing. Mazda’s Kodo design language has grown up since its introduction in 2010 with the CX-5. The MX-30 shows off a polished and refined design that’s more like one of those SUV/coupe things posh European brands seem to be obsessed with. Then there’s the freestyle (not suicide) doors that are a nod to the Mazda RX-8. They seem like a gimmick, and to an extent they are, but I found them more useful than I’d expected.

More practical than it looks

So those doors. Okay, if you’re in a tight parking space it’s not great for loading people in but if it’s just you and one passenger it’d be great for throwing your bags and jackets in the back. If you need to carry people in the back regularly, get the CX-30. This is more aimed at the ‘lifestyle’ crowd, i.e. if you don’t have kids. Though, the fact you can’t open the rear doors without the front ones being open could also be a good selling point if you want to keep small children in the back.

As the MX-30 shares the same underpinnings as the CX-30, space inside is more or less the same. I was able to sit ‘behind myself’ with room to spare. Headroom is slightly down compared to the CX-30 but nothing major. The boot is a tad smaller though.

Modern Mazda interiors are some of the best in their respective segments and the MX-30 is no different. In fact I’d go as far as to say it’s a step up from the CX-30 it’s closely related to. I like the use of different materials in the cabin such as the Heritage Cork which comes from the bark of trees that haven’t been cut down and fibres made from recycled plastic bottles, very eco. A quick look and feel around the front of the cabin and there’s minimal use of cheap plastic materials bar down the very bottom of the interior. Your main touch points are soft plastics and leather. Mazda is definitely on an upward trend into the premium segment.

The CX-30 was my favourite Mazda crossover in terms of driving dynamics. The MX-30 has taken the top spot. I took it to one of my favourite mountain roads outside Tokyo and while the MX-30 is far from a hot hatch or a sports car, it handled relatively well in these conditions. Certainly, I was having more fun than expected. The powertrain is a bit asthmatic for any sort of touge driving but it’s got a well sorted chassis. Body roll is kept to minimum too, Mazda still inject their cars with more fun than their competitors.

Just a good all rounder

As much as I hate the term ‘lifestyle vehicle’ the MX-30 is certainly that. If your lifestyle fits a car that’s aimed at mainly being a two door with doors and space in the back for the off chance you need to carry people around, then the MX-30 is for you. It works well in most situations be it from driving around town or doing long motorway drives.

Five Things I Dislike About The Mazda MX-30

One of the most noticeable things about the MX-30 was its inability to settle on a motorway at triple digit speeds. Japan’s motorways, compared to other countries I’ve driven on, are quite smooth yet the MX-30 just couldn’t find a rhythm to settle on when cruising at high speeds. It deals with bumps and joints on the road well but it’s on the flatter surfaces you feel the car pitching more. I didn’t notice it as much in the CX-30.

Then at motorway speeds the pillar directly next to your ear squeaks. I’m not sure if this is an isolated case with my test car or something that happens with all MX-30s. It’s an easy fix though, just turn up the audio volume until you can do it. Speaking of, I was surprised this car didn’t come with Bose speakers. The standard speakers weren’t bad but the Bose speakers would’ve been better at drowning out that pillar squeak.

As cool and fun as those doors are, they do create a bit of a blindspot. It was especially awkward when you’re trying to turn left over a pedestrian crossing and you don’t need a cyclist speeding your way because there’s a massive pillar blocking your view. But they are cool doors.

Not as economical as I’d expected

Now, Mazda does claim this to be a “mild-hybrid” so I should’ve only expected mild fuel savings. After all, the 48V battery at the back of the car recycles kinetic energy from regenerative braking to power the electrics and temporary power boosts. Unlike a ‘proper’ hybrid it won’t power the car on pure EV mode. That said, Mazda claimed an average of 6.6L/100km and the best I got was 7.6L/100km which isn’t too bad all things considered. For the true eco-warriors the full EV or upcoming plug-in hybrid variants will be the ones to go for.

Which begs the question why bother with a mild-hybrid version in the first place? The MX-30 is based on the same platform as the CX-30 so surely the same mild-hybrid system could be applied to that car which is more practical. I understand the need for the MX-30 in the model lineup as a standalone ‘electrified’ vehicle but I feel like an EV and plug-in hybrid version would’ve made the same point. Now you’ve got this, the CX-3, CX-30, CX-5, CX-8, and CX-9 to choose from.

Regardless, I like where Mazda is going and the MX-30 shows signs there’s still room for bold and daring moves at Mazda. A SUV/coupe thing with suicide, sorry, freestyle doors wouldn’t be something that would’ve passed production approval at other mainstream Japanese companies so I’m glad Mazda had the gall to do something like this. Even if the mild-hybrid version doesn’t make all that much sense in the grand scheme of things. 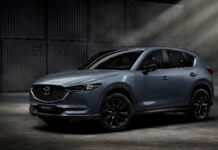